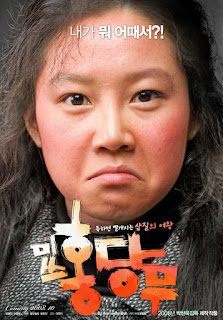 First up on Tuesday at 12:30 is the Korean film 미쓰 홍당무 (Crush and Blush). A film from 2008. Korean without subtitles. Yang Mi-sook is an unpopular and frumpy high school Russian teacher, who has a habit of going red in the face. For ten years she has been harbouring a crush on Seo Jong-cheol, her former teacher and now married colleague, though he is more interested in pretty new teacher Lee Yoo-ri. Mi-sook tries to put a halt to this blossoming romance, forming an unlikely alliance with Jong-cheol’s daughter, Jong-hee. (Wikipedia)

At 17:00, there are Two Korean films: 2의 증명명 (To Become Two) and 로즈 온 에어 (Twenty minutes)
To Become Two: Hong You-jung, who had lived her 42 years of life as a legally dead, is now preparing to apply for the gender correction procedure. She cannot afford to take a sex reassignment surgery (SRS) and her neighbors keep discouraging her by saying that her attempt will come to a failure. Korean with English subtitles.

The last film of the evening is Kiss Me at 19:30. MIA (Ruth Vega Fernandez) and FRIDA (Liv Mjönes), both in their thirties, meet each other for the first time at their parents’ engagement party. Mia’s father, Lasse (Krister Henriksson), is about to get married to Frida’s mother, Elizabeth (Lena Endre), which will make Mia and Frida stepsisters. Lasse’s daughter, Mia, has not visited her father in years and arrives with her boyfriend, Tim (Joakim Nätterqvist), with whom she is about to get married. As Mia and Frida get to know one another, strong emotions begin to stir between them. Their relationship will turn everything upside down for everyone close to them with dramatic consequences. (IMDB) Swedish with Korean subtitles.