2014 was a great year for The Kimchi Queen. Although I was out of country for half of the year, I still was able to write often enough, and almost (almost!) reached two million views. So, what were the most viewed posts of 2014? 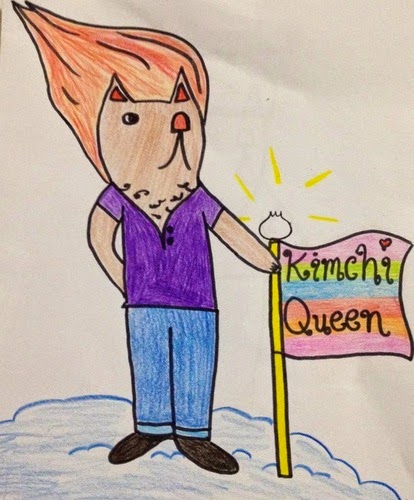 2014 was a great year for The Kimchi Queen. Although I was out of country for half of the year, I still was able to write often enough, and almost (almost!) reached two million views. So, what were the most viewed posts of 2014?

January’s two most popular posts were on Lil T￦ink in Wireless Peninsula and my favorite news story about a man at a sauna gobbling on another guy’s penis and contending that he thought it was fish cake.

A news translation, Heo Ji-ung’s Gay Proclamation: “I have experienced skin ship with gays, but I’m not that way”, got the most views in February followed by an event notice for Gays are Coming Short Film Festival.

In March, my powerpoint (Queer Korea: A Historical Perspective) got a lot of views, as well as a vocab word: 이성애규범성: heteronormativity.

The only especially popular post from April was a translation: The Dictionary Definition of Love Has Been Restored to a Heterosexual Basis.

A post on a Film Screening for One Night Only got more than 2000 views in May, followed by a translation titled Kim Jae Woong Comes Out: The Problem Isn’t Homosexuality but Rather the Directorial Style.

In June, I moved back to Korea and posted a bit more regularly. June being pride month, the most popular posts were on the 2014 Korea Queer Festival (which I unfortunately wasn’t able to attend)

The great Stories of Seoul were popular in July, as was a translation on Hong Seok Cheon talking about how he prevented the suicide of a young teen.

In August, the great film Night Flight was pre-released and Chingusai celebrated 20 years of fighting for gay rights.

My posts on The Gays are Coming Volume 3 and a translation piece (Actress Cha Soo-yeon, “For a lesbian role I met sexual minorities in real life”) were the most viewed in September.

In October, Park Won-soon backed off from his statement that he wanted Korea to be the first Asian nation to legalize same-sex marriage and the queer word 위장결혼 (fake marriage) piqued readers’ interest.

November saw the depressing news that Korea appointed an anti-gay board member to the human rights commission. An episode of PD Notebook released an exclusive on homosexuality in November as well.

December was quite a busy month at the Kimchi Queen. Occupy City Hall brought a lot of readers to my blog, especially my translation of Park Won-soon’s ‘apology’. A post on Korea’s ever growing embrace of homosexuality also attracted a lot of views.