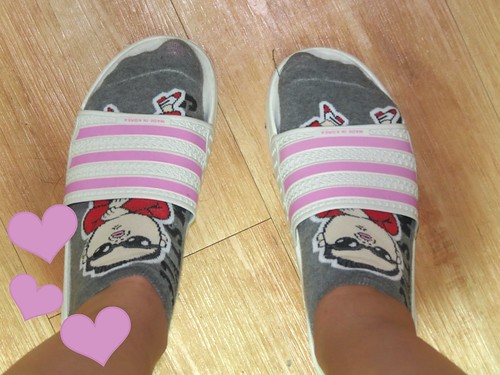 I’ve been living in Busan, South Korea and working as a teacher for nearly 18 months now. It’s strange to look back at this blog and read the things that were so shocking and different when I first got here, especially considering that I scarcely notice them now.

I’ve been living in Busan, South Korea and working as a teacher for nearly 18 months now. It’s strange to look back at this blog and read the things that were so shocking and different when I first got here, especially considering that I scarcely notice them now.

If…Your sense of what’s acceptable footwear in public becomes blurred. It was only when I was bobbing around my apartment and I heard a very noisy shuffle every time I took a step that I took a moment to look down and really focus on what I was wearing on my feet. PSY socks accompanied by plastic shower slippers. The Koreans love their slippers, and even turn shoes that aren’t slippers into a slipper-esque shape by treading the back of their shoe down. They also hardly ever wear a pair of shoes without socks, and novelty socks being so cheap here, their footwear choice can sometimes make life very interesting!

If…You feel hungry when you haven’t eaten rice ALL day. There was once a time when I would go a week or two without rice. I liked it, but it wasn’t part of my staple diet. Then it all changed. Koreans eat rice for breakfast, lunch and dinner. They eat rice cakes for dessert (not the kind that we know in the UK, but gloopy cakes with a sweet paste inside), they drink rice wine whenever they can get their hands on it. At first it was a little overwhelming. As soon as I left school, I would go out of my way to avoid rice, but now I crave it! Unfortunately I don’t share the same rice burning metabolism as the Koreans, so I am developing a rice pooch! Waaah! 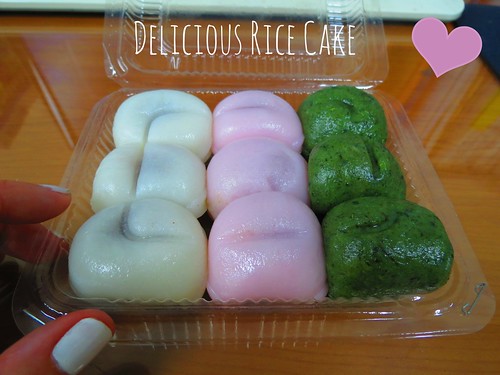 If…You’re numb to the annoying habits you witness when you walk down the street. Whether it’s youngens on their phones not looking where they’re going as they play the newest game on their huge mobiles, the drunk business men who can’t take a step forward without taking another two back (and one to the left) , or it’s the old folk who think that everyone should get out of their way. Even the mopeds want a piece of the pavements and charge down them throwing business cards at thin air. You’re done with being angry, you’re done with bracing yourself and purposefully bumping into anyone that gets in your way. But now, you duck and dive like a professional boxer, without even realising. Just as mirror, signal, maneuver eventually becomes natural to drivers, you can read the pavement without a second thought now.

If…You’re completely fine with nakedness and the intricacies of showing off the human form. You understand the unwritten rule that it’s A ok to show everyone your money maker in the jimjilbang, but low and behold, be prepared to feel the wrath if you get your bikini out at the beach, or flash too much chest or shoulders on the metro.

If…You don’t bat an eyelid when your students show public displays of ‘skinship’. They touch each other in what would be deemed inappropriate at home. Boys holding hands over the desks while they avidly listen to you, a little encouraging pat on the rumpus to a friend who is about to be tested by the teacher. It’s when you see the home room teachers doing this and you don’t even consider how it would be classed as sexual harassment in England that you realise you’ve been here a looong time. I love seeing the old drunk guys helping each other home, folded into each others’ arms.

If…You start to talk in a weird hybrid accent. I always noticed other people doing it, particularly British friends for the purpose of being understood a lot quicker. When they speak to Koreans they tend to talk sloooower, with a lot more intonation and riddled with Americanisms. Not just words like ‘trash’ or ‘bathroom’, but also the accent, water is now pronounced as ‘wader’. It was only when I watched this video of me talking to Isabelle, one of my cutest first grade students, that I realised that I was also guilty of doing it. I hope this disappears before I get home! Watch the video below to hear my awful accent!