Editor’s Note: A shorter version of this article, which was written in Daejeon, S. Korea a few weeks after 9/11/ 2001 was submitted to the Korea Herald as a response to that day from an expat who was living in New York up to just a few months before the attacks. Here is the response from the paper’s editor:

“thank you for the contribution, but I have decided not to run it.

I do not know if you have ever seen our readers’ view section, but it usually consists of 1000-word articles or essays that raise a certain qustion and make a clear argument on current events. Your article is rather too sentimental and personal for the reader’s veiw section.”

Thank you for your time and efforts.
Jehae Do, The Korea Herald.

Editor’s Note: A shorter version of this article, which was written in Daejeon, S. Korea a few weeks after 9/11/ 2001 was submitted to the Korea Herald as a response to that day from an expat who was living in New York up to just a few months before the attacks. Here is the response from the paper’s editor:

“thank you for the contribution, but I have decided not to run it.

I do not know if you have ever seen our readers’ view section, but it usually consists of 1000-word articles or essays that raise a certain qustion and make a clear argument on current events. Your article is rather too sentimental and personal for the reader’s veiw section.”

Thank you for your time and efforts.
Jehae Do, The Korea Herald.

It was this kind of local media chief burying his head in the sand (and the spelling and grammar mistakes) that lead to the opening up of our idea for some kind of independent English Language publishing in South Korea. Hence the original concept of DDD Magazine which in its current incarnation is The Three Wise Monkeys (3WM).

Interestingly enough the Herald’s coverage of 9/11 comprised of one reporter going down to Itaweon and asking two soldiers from the U.S. military and one Canadian couple teaching English in Seoul what they thought about the attacks. The responses were unremarkable.

Below is the article in full:

Flashes about the WTC from Daejeon.

Because I do want to turn again… 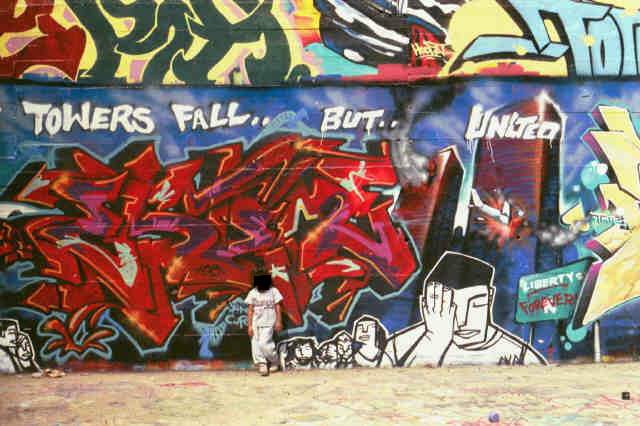 I am trying to get centered and find the words for putting it all together: “Please Call”. “Towers Attacked”. “Ground Zero.” “Six Degrees of Separation”. “Sensible Retaliation”. “The Military will Strike”.  “Markets are Rolling Again”.

Because the 21st Century is here and life is carrying much anxiety that people are just sensing and putting up with. Because Korean ‘beer buddies’ in Daejeon expect me to be missing or at lease broken in front of them. They look at me for a second, look down to the floor shaking their heads like a defeated puppy until their favorite dance video returns to the television as originally scheduled. Because the New York Yankee logo is still popular enough in the local PC Bangs or the international prayer services. Because I finally got an email answer from James (Big Marvin); it was actually Nelson Rivera (Goody) covered in ash like a deranged  but upright Polar bear and humping it out;  out of the World Trade Center rubble that was clouding up the all night cable channel that I didn’t think I would ever turn off.

I hadn’t been out of New York for long and was buying ripe tomatoes for homemade pasta sauce when I got the news by a gesture. The local Korean produce man was not taking the tomatoes but waving his hands back and forth and exclaiming, “Mi Guk Pok Tan. Pok Tan”, and then in Konglish that anyone could understand, “Bomm-ah, Bomm-ah.” Beginning of the week, end of a long day, I’m already worn out. He doesn’t have a TV, neither do I…

“What the Hell are you talking about?

Through the next passing window come horrors heaped upon horrors and the shambles of emotion. Inside there is no one under my age gathered around a television set; so it can’t be a video game and there are no subtitles so it is not an action movie. The people in the restaurant are pointing and waving me in but I can’t get through the glass.

Because I enjoyed having a drink with as many different kinds of people as you can find in New York, I sometimes went looking for them on top of the One Building at the Windows of the World Club. 107 floors up to the overpriced bar.  Even then New York was always asking you for an id and all I had was my ‘res-id’ to Saint Anthony’s  single room occupancy residence (The Res.) all the way in real uptown, as in ‘So-Bro’ as in South Bronx. That wouldn’t get me through security so at the foot of the elevator I told the tall Irishman Declan, “Don’t worry I’m with the Mayor’s Office.”  I only had to do that twice and then whenever he saw me I just glided in. You can imagine what the views were like there and everyone had an extra energy to pose and drink and dance till whenever. At the beginning of the night I used to play the ‘bridge and tunnel trap’ and scout out people who I could guess were not from Manhattan. I went to high school in New Jersey so it wasn’t such a hard thing. Most nights were late and I would have to keep my ritual of sneaking away and going into an empty conference room down the hall for a short nap. Waking up in the darkest part of the night there were only a handful of people closing down the club: yet looking through the glass still gave a goose bum view and I considered how I’d never sleep so close to the heavens again.

When the terrorists brought all those floors down they must have felt the same kind of glory. But it was upside down, a perverse glory, and everything about the idea of security has changed. And now in Daejeon, hanging around with “foreigners” I meet here, every social encounter is different. Now I am from the bridge and tunnels.

Because now senses are winding back around our core and we are getting back to life. I wonder if all the so-called citizens of the world can appreciate how connected (or Inyeon as a Buddhist reference) the peoples of New York are? The Korean papers mourned the Koreans lost calling them, “The cream of the crop.” It’s true, yes it’s true that many of New York’s bravest are the police officers and many of New York’s finest are the firefighters and plenty of Manhattan’s smartest worked in and around the Trade Center and they have all perished. Yet there are many others to know. Because it was him on the television I saw.  Nelson Riviera wobbling through the dust without even a high-school diploma. He had a 7-bucks-an-hour job going up and down all the elevators in the Trade Center dropping off and picking up financial documents. That was Nelson or “Goody” as we called him at The Res. for all of the free donuts and sweets he would bring us from downtown up to the Bronx. “Big Marvin”, helped me get planted in Korea. He had the internet hooked up to his giant TV which took up way more of the small living space than seemed to make sense to me, but at least once a day ‘B.M.’ would clear out his occupancy on the fifth floor and let me check Dave’s Esl Café and find the particulars for a teaching job here in Daejeon. Goody, Big Marvin and myself were section 8’ers. With the help of New York City public housing we were living it day-by-day just a few blocks from Yankee Stadium. And now a few months later, in that night’s initial shock of 9/11, in that deranged soul time of looking for defense mechanisms and safety valves to comprehend major calamity, in that zone of at once trying to take it personally while at the same time keeping a safe distance, I kept mentally repeating while breathing in and out:  “Thank God it was not a full Yankee Stadium they got.”

Because a few days later after I walk into a perfume laced student bar in Daejeon, where up on the screen is a K-pop video of a five piece chiseled boy-band. They are dressed as mechanics flipping tools and dancing around a 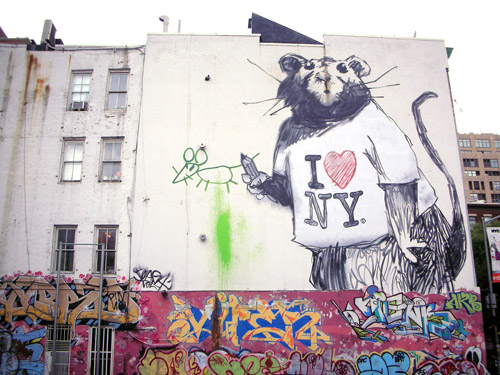 foreign car. It looks like a Ferrari with a cutie-pie working underneath it. I was about to ask the bartender if that was really her up there in the video, but she notices me and changes the channel to a news station. But still… has any of this really happened? Was that Goody-the friendly-ghost  coming out of the catastrophe sent clouds?  Those first images have now been absorbed and will soon be cleverly re-furbed and interspersed as part of the trailers for Korean Doomsday movies. Perhaps it’s the state of the world or the news of the world or our minds acting in the world which tell us that at this point something like 9/11 is a lot easier to handle when it is a mash-up and becomes The Surreal.  Maybe even the female student standing next to me knows this as she drops her stare from the screen to ask,

“Are you American? Your country is so serious now!”

Her friend the bartender keeps commenting out loud,

Because I want to turn again and go to re-affirm on the computer that it was footage of Goody in the very first images I saw from that day. And now, he has his bubble-but secure at Saint Anthony’s. He must be up in the Bronx in his room across from my old one at 3G. Probably listening over and over again to that Mariah Carey record, Heartbreaker that I should never should have got for him that last Christmas in New York. No sense in sending this to him to read, I’m sure he is transfixed in the New York Post’s” 10 ways to fix a broken heart, and will turn that over to ‘B.M’ when he is through with it. In a way Goody (or Ghosty as is nickname did become) got his New York minute of fame played out for him by terror but at least not death. Here in Daejeon I finally sit at the bar which is like some I’m okay—you’re okay cue for the bartender and her friend to ask about the black cloth band tied around my left arm. That is staying on for now, but it’s also okay to ask to hear the K-pop music to be turned up again. The cutie-pies keep smiling and chattering and it’s worth considering that even if the two don’t get it right now, I know that getting on with life is a thing that Koreans also know something about.

Scott Liam Soper–The writer is co-editor and creator of “DDD” and teaches English inside a juvenile reformatory. He can be reached at [email protected]