Shortly after arriving in Korea there is one thing that you become very quickly aware of and that is that Koreans are mightily proud of their seasons. For those that don’t live here you may be wondering what I’m talking about, so, I’m about to let you in on a little secret.

Korea has… wait for it… FOUR seasons. That’s right, not one, not two, not even three, but a whole whopping four! When the weather gods were handing out climates at the beginning of time Korea hit the jackpot. They got the royal flush; they struck gold; they got the whole caboodle. Spring, Summer, Autumn and Winter.

Shortly after arriving in Korea there is one thing that you become very quickly aware of and that is that Koreans are mightily proud of their seasons. For those that don’t live here you may be wondering what I’m talking about, so, I’m about to let you in on a little secret.

Korea has… wait for it… FOUR seasons. That’s right, not one, not two, not even three, but a whole whopping four! When the weather gods were handing out climates at the beginning of time Korea hit the jackpot. They got the royal flush; they struck gold; they got the whole caboodle. Spring, Summer, Autumn and Winter.
Koreans love to tell you about their four seasons. They have set activities for each one that everyone wholeheartedly participates in. The country is adorned with giant photographs of famous landmarks and landscapes, beautifully capturing each season. So if you have chosen to live here you had better embrace and join in the celebration that is Korea’s four seasons or jump on the next flight back home.
Now those that know me might detect a slight hint of sarcasm in my tone. Some might even accuse me of being a tad disparaging toward my adopted country. But there is a reason that I sat down to write about the rather mundane topic of seasons and weather. I absolutely love the seasons in Korea. They’ve shown me what they have to offer and I’m sold. Each and every one of them is unique. Even the sweat-ridden, hell hole that is a Korean summer, but more on that later.
So why have I bought in? The reason is quite simple. I come from England. As a kid I was told that my country too was blessed with four seasons. But my parents and teachers lied to me as their parents and teachers had lied to them before creating a never ending vicious circle.
Let’s look at the facts of the British seasons. Winters are cold and dreary. The never ending drizzle that soaks you to the bone just sucks the will to live right out of you. Spring has a few things going for it; slightly warmer weather gives you hope for bright, hot sunny days, barbeques in the garden, driving round with your friends, top pulled down, tunes pumping out the stereo. Then summer arrives and it’s like a kick in the gut. The temperature struggles to get into the twenties and on those few days that it does, the rain is always guaranteed to spoil the party.
What I’ve always found amusing about the British psyche is our inability to deal with extremes in weather that occasionally come our way. Take summer for example. If the temperature somehow creeps above 25 degrees the tabloid newspapers go to town. “Ohh What a Scorcher”, “Barmy!” the headlines cry out. Front pages adorned with pictures of the great British public descending en masse to beaches across the country, their unsightly white flab protruding from ill-fitting swim suits, frolicking in turd ridden seas.
Winter is equally absurd. All it takes is a few drops of whitish looking sleet to fall down from the sky to send the nation into a mass panic. Schools and offices shut down early and people raid supermarket shelves to stock up for the long haul.
My seasonal experiences haven’t only been confined to the U.K and Korea though. I consider myself fairly well travelled and have been fortunate enough to live in various parts of the world. Take Florida for example, where I lived for nine months in the hip and hip-replacement happening town of Boca Raton. They have three seasons there: hot, very hot and holy shit it’s hot! Then there was Sydney; again they almost got the full four seasons, but had to settle for the three that are hot, not so hot and slightly chilly.
Which brings me back to Korea, where there are four seasons, four distinct seasons. Each season has the correct weather, temperature and changes in nature that allows that season to truly call itself a season. Now, I must admit not all seasons are created equal here. The cold bits and the hot bits are much longer than the other bits that intersperse between them, but each one has its own unique characteristics. 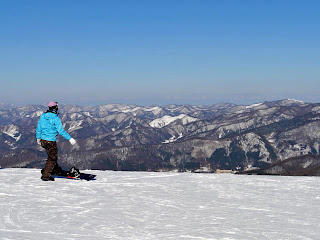 Let’s start at my favourite season, winter. Now that might surprise some because if you ask the average Korean and even the average ex pat, “What is your favourite season”, the answer is pretty much guaranteed to be, “ Spring or autumn” (or fall, which is also a perfectly acceptable word since both words came into being around the same time in England. Fall ain’t American folks; it’s as British as Fish ‘n’ Chips!).
Korean winters are refreshing. Sure, they are cold, but not too cold. You wake from the snugness of your bed and step out in to crisp clean air, stunning blue, clear skies and rarely does a drop of rain fall. When you come home at night you snuggle up on the floor soaking up the warmth that is the genius of Korean ‘Ondol’ (under floor) heating.
Here in Busan, we don’t get much snow. The few flurries we do get normally send people into a dizzying frenzy of happiness. But go slightly north or slightly west and Korea does pretty well on the snow front. So much so that those decent, honest chaps at the International Olympic Committee decided to give them an Olympics. Yes, another one. First there was the Seoul 88 Summer Games and in a few years time will be the PyeongChang 2018 Winter Olympics. And do you know why Korea will be able to boast a summer and winter Olympics? Because they have four seasons, that’s why!
Anyhow, I’m digressing a little. Let’s get back to the seasons. Spring. Oh, beautiful spring! 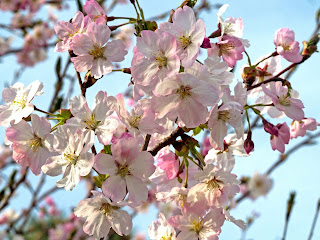 Like pink? Like pink and white? Like pink and white and all the colours under the rainbow? Like pink and white and all the colours under the rainbow and flowers? Then, BOOM, come to Korea! The sensory overload of colour that is the cherry blossom season is quite frankly a site to behold. For a very few short weeks of the year, the concrete jungle that is the city I live in is transformed into a blanket of pink beauty. Normally drab uninteresting streets bring traffic chaos as people swarm in their thousands to capture the blossoms. Whole cities, such as Jinhae, make their entire tourist industry dollars off those few short weeks.
And then a few weeks later, the blossoms fall…
It’s warm outside but this tiny delicate pink flake falls past you brushing your cheek. You think to yourself, it’s April, it can’t be snowing. But it is. It’s snowing cherry blossoms. 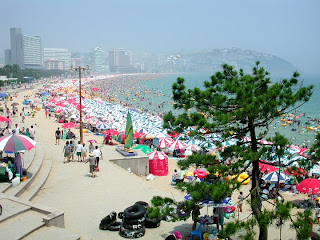 And then comes summer. I don’t feel like writing about summer. Summer is a piece of shit. But since this is a piece about all four seasons, I feel it deserves a mouthpiece. After all it is a season and a very distinct one at that. It starts off OK. The spring flowers turn to leaves. You start putting on shorts and flip-flops as you head out in the evening to sit in front of the local convenience store late into the early hours of the morning sipping on the deliciousness that is Korean beer. But then summer decides that it doesn’t want to be friends. Slowly it cranks up the heat dial and while it’s at it throws in a few monsoons to add humidity hell to the mix. Air conditioners and fans are turned up to maximum power, but still you suffer. Walking a few hundred meters down the road turns you into a dripping, nasty, sweaty mess that pretty much guarantees you scoring the leading role in the next reincarnation of the Swamp Thing. But respite is at hand. Busan is blessed with some amazing beaches so why don’t you slap on the sunscreen and head out to the nearest one, where you can meet a million other like-minded Koreans all scrambling for the same two inches of sand. 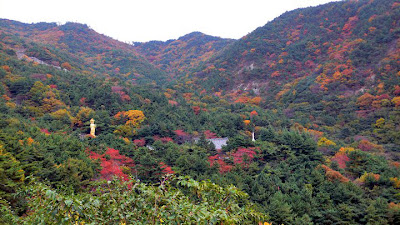 What I don’t like about summer is that it’s a bit of a party pooper. That is the party being hosted by autumn. Autumn does its best though, actually it does better than that and gives the finger to summer by putting on another glorious display of colour. For those that don’t know Korea, there are a lot of mountains. In fact it’s seventy percent mountains and with that canvas Autumn works it’s colour magic. Reds, browns, yellows, golds, and russets fill the landscape. Koreans and myself head to those mountains to soak everything in. Korean hikers are the nicest people in the world. You may have gone head to head with the same guy in your car earlier, but up in the mountains the rules change. We are all experiencing the beauty of another Korean season, therefore we are one. We are the same. People invite you over to enjoy their homemade ‘kimbab’ (rice and vegetables wrapped in seaweed) and never leave your glass empty of the ever ubiquitous ‘soju’.
Eventually summer relinquishes its selfish humid grip on the weather and days become pleasantly warm and nights start to get a little chilly. Shorts give way to long pants and sweaters. Then that guy in Seoul pushes the big button that starts winter again right on cue and suddenly you are wrapped up in your thick fleece, beanie hat and wool scarf. Winter is coming, another new season beckons, because this is Korea, and in Korea there are four seasons.
Addendum: I would like to make it clear that my comments about British beaches were in the context of my experiences of them when younger. Britain now boasts some of the cleanest coastal waters in the whole of Europe and has won awards for the pristine condition of the golden sands that can be found all around her coastline. You should all visit them one summer. Just remember to pack a sweater…