Every once in a while, fortune smiles upon the Farrand household in Seoul. Two relatives of Heather’s and technically of mine now (although I haven’t gotten quite used to the fact), sent us a Nintendo Wii in the mail. Heather had mentioned off-hand to them that ‘the only thing our place is lacking is a Wii.’ Two weeks later, one arrives at our doorstep.

If I become rich one day, remind me to send Wii’s to everyone I know. 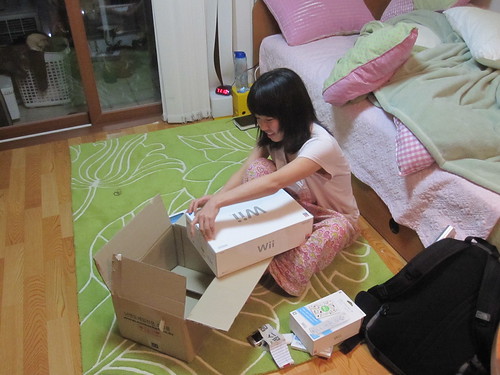 Every once in a while, fortune smiles upon the Farrand household in Seoul. Two relatives of Heather’s and technically of mine now (although I haven’t gotten quite used to the fact), sent us a Nintendo Wii in the mail. Heather had mentioned off-hand to them that ‘the only thing our place is lacking is a Wii.’ Two weeks later, one arrives at our doorstep.

If I become rich one day, remind me to send Wii’s to everyone I know.

The name Wii is a little odd, and is pronounced ‘We’. It alludes to the idea that it’s supposed to be played with friends. The double ‘i’ was chosen to represent the outlines of two people standing next to each other. I guess it would have been an interesting situation at Nintendo’s headquarters for the person who proposed the name, waiting for the reactions of the executives.
It has broken numerous records over the past few years and more than 67 million units have been sold. 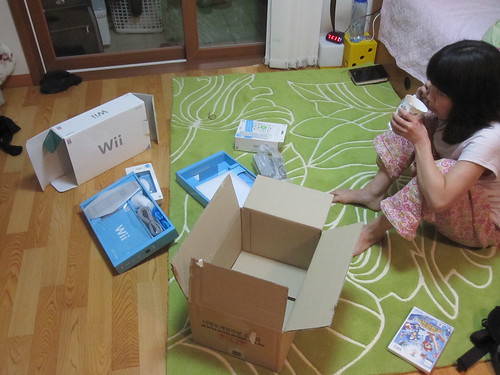 Before playing, Heather dutifully called her relatives, who shall now be collectively referred to as GOW (Givers Of Wii). 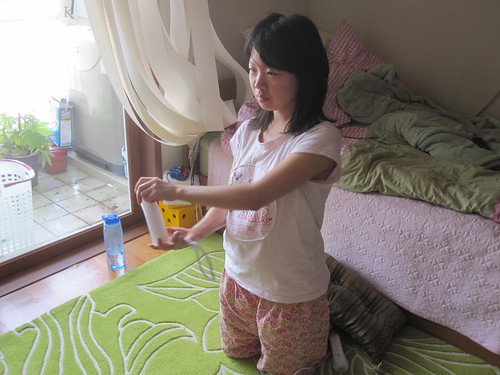 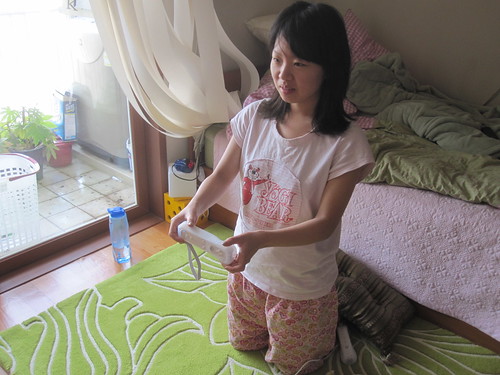 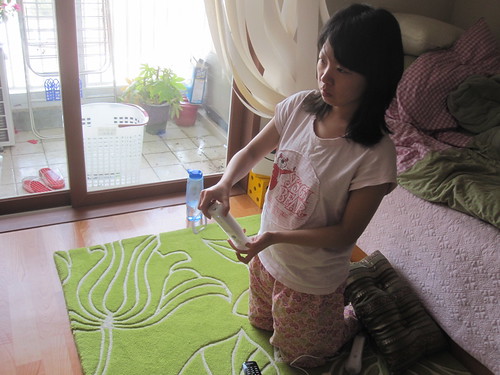 Those of you who are under 35 probably know about the Wii already. But I’m pretty sure my Dad doesn’t and he reads this blog regularly, so I need to explain. The Wii’s innovation is in its controller, which captures the motion of the person who holds it. So instead of just pressing buttons, you also need to move your body to control the game.

Is it a substitute for exercise? Well, not really. 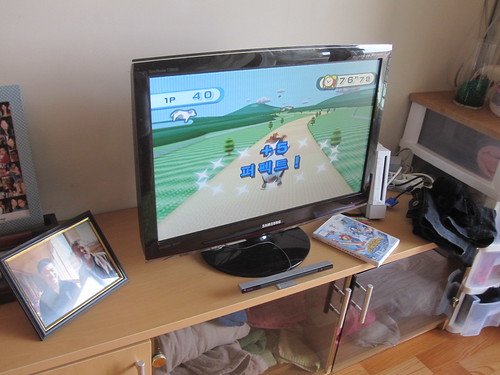 In this cow-riding game on Wii Play, you need to lean with the controller to turn corners. For obstacles that you have to jump over, you flick the controller up quickly.

The novelty of it all wears off after a while, but we’ll still be using it for a long time. 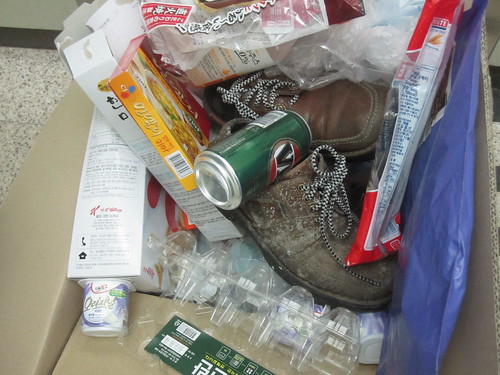 Now this is an interesting gauge of how dramatic my life is. A habit I picked up from my Dad is keeping shoes for an exceptionally lengthy period of time. My Dad would wear shoes until they developed gaping holes, only discarding them if they fell off his feet.
The laces of my old shoes withered away and so I replaced them with different ones. The new laces didn’t quite match, but for a time, things were grand. Then a hole started developing in the sole. Hey, that rhymes. The hole let water in and got my socks a little mucky, so I put the shoes in our recycling box for possible repairs at a later date. Incidentally, there is also a can of VB in there, which is Australian beer now available at our local GS supermarket. Anyway, because the recycling box is left out at the mercy of the forces of nature, the next time I looked, one of the shoes had become mouldy. This led me to ponder the question: What would be the meaning of life if you lived on a shoe?

And more importantly, can you recycle mouldy footwear? 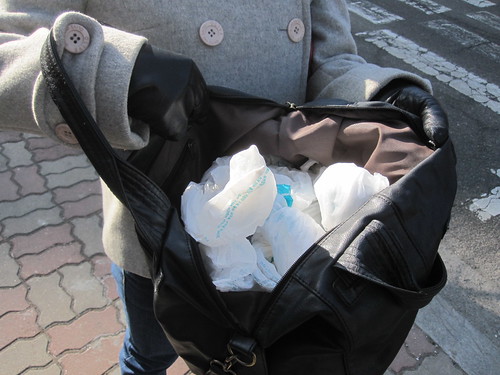 GS Supermarket charges 50 won (5 cents) for a shopping bag these days. It’s generally a good idea and designed to encourage customers to bring their own bags. Excess shopping bags in the world are contributing to the Great Pacific Garbage Patch, an enormous perpetually circulating mass of floating rubbish in the North Pacific. Estimates of its size range from 700,000 square kilometres to twice the size of the continental United States. 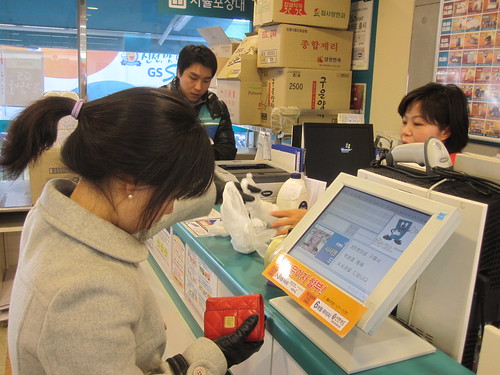 We always keep our bags, for various reasons. One thing I didn’t know was that you can bring them back to the supermarket and get a full refund for them. I found this out after enquiring as to why Heather’s handbag was looking like a bloated hippo. 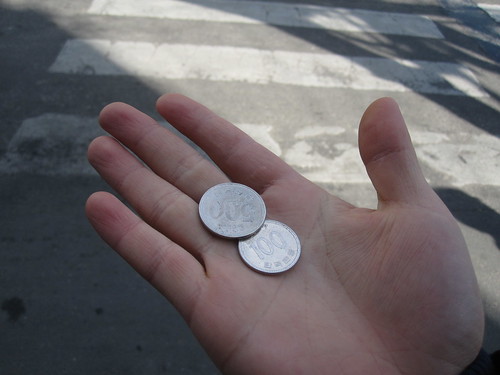 We had twelve bags in total and got about 60 cents back. It reminded me of my Scouting days when we used to collect bottles to raise money for our troop.
If you’re in Korea and you know someone with a drawer full of shopping bags, tell them that they’re sitting on a gold mine. 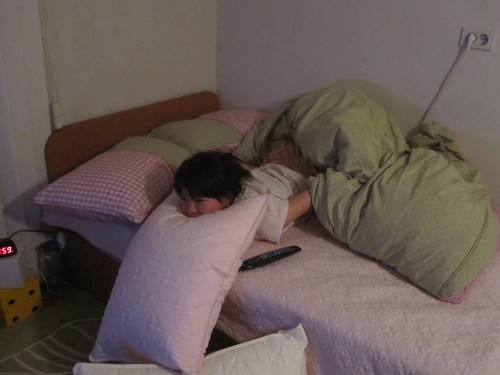 Our dormitory room is a little cramped and only designed for one occupant. But we seem to get by okay. The photo above is showing Heather’s preferred way to watch television, on a single bed. Apparently it’s the most comfortable position for extended periods of time.

Enjoy your week everyone.