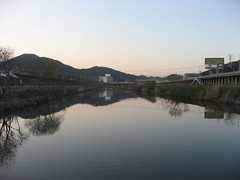 A few years ago $900 million was spent creating a 6km recreational space along a stream in central Seoul. I’ve visited this urban renewal project ‘Cheonggyecheon’ (‘청계천’) and it is quite beautiful, although as its Wikipedia page suggests, it has not been universally welcomed.

A few years ago $900 million was spent creating a 6km recreational space along a stream in central Seoul. I’ve visited this urban renewal project ‘Cheonggyecheon’ (‘청계천’) and it is quite beautiful, although as its Wikipedia page suggests, it has not been universally welcomed.

It’s possible that since then Korea has developed an obsession with rivers, streams and even canals, though perhaps it had one even before ‘Cheonggyecheon’ was completed. There’s even a development proposed for our neighbourhood which involves creating an artificial stream with bridges running the length of the district. Everyone, it seems, wants a little bit of ‘Cheonggyecheon’. 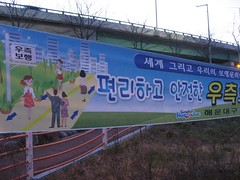 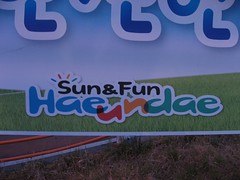 The Suyeong River (‘Suyeongcheon’/수영천’) in the Banyeodong area of Busan is not quite so picturesque, but this hasn’t stopped part of the area around it being designated as a ‘park’. A ‘park’ elicits certain imagery for an English person. The Victorians, stifled by industrial pollution and in a last gasp of the grandeur of empire, built quite a lot of them, generally squarish in shape, generally complete with ornamental ponds and statues of lions evoking notions of far off conquests and British dominance. These days, except on the sunniest of days, they’re primarily the domain of drug-users and knife-wielding youths, and as such, have retained their national metaphor. In Korea, a park is a much more fluid term, seemingly covering almost any public area within a city that hasn’t succumbed to urban sprawl. Which usually means they are to be found somewhere it would be too difficult or undesirable to build.

So to call the Banyeodong river development a park by British standards would be a stretch – it is essentially a couple of paths either side of a river nestled between two busy roads, featuring a small recreational area, some public exercise equipment, a vegetable patch, a decaying factory, and a couple of potentially dangerous river crossings. 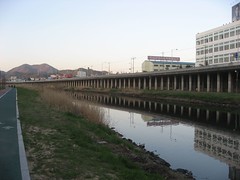 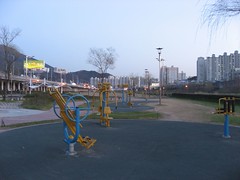 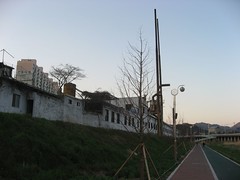 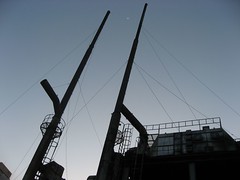 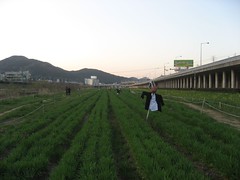 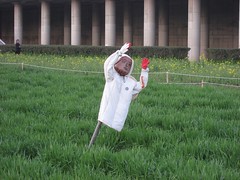 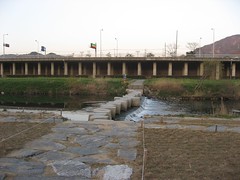 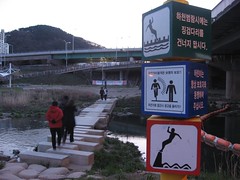 But you have to take what you can get here I think. I used to enjoy running when I was younger and have often thought about taking it up as part of my efforts to keep fit, but it isn’t really safe to go out running alone early in the morning where I’m from, and in Korea, it’s a question of finding a place. Like most of Korea, Busan is quite mountainous so the flat areas between the peaks tend to be heavily built up. Running along the main roads never looks healthy because of the heavy traffic fumes, frequency of junctions, people, and motorcyclists treating the pavements/sidewalks as a road. Away from the major roads, there aren’t even any pavements so you take your chances with the traffic weaving in and out of the streets. It’s not conducive to picking up a sustained pace. So if I sound underwhelmed about the park in Banyeodong, you have to understand it is a small oasis of possibility in an unforgiving urban landscape, and I wish we had something like it near our apartment. Perhaps one day the local government will build a stream for us, as promised.