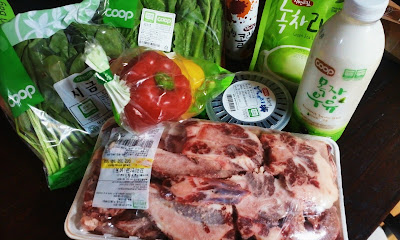 So, although B and I are now living in a little golmok ‘hood where, let’s just say, having a bike with a basket is going to come in real handy, we are just a short bike ride away from a particularly schmancy part of the city which is overflowing with organic shops and food co-ops, which is exciting for me, because it’s not a thing that has been a reasonable option given the places I’ve lived previously.

So, although B and I are now living in a little golmok ‘hood where, let’s just say, having a bike with a basket is going to come in real handy, we are just a short bike ride away from a particularly schmancy part of the city which is overflowing with organic shops and food co-ops, which is exciting for me, because it’s not a thing that has been a reasonable option given the places I’ve lived previously. Since we’re going to have to go out of our way to get our groceries anyway, we might as well try to put in a little extra effort to be responsible consumers as well.

To be clear, I know co-ops are mostly marketed to people who are worried about things like gluten and “toxins” and words on packages they can’t recognize. They’re marketed that way because they have to be to get the capital backup they need to survive. The truth is, in my opinion, that our bodies are resilient and built to survive. Of course, some things are better to put in them than others, but I’m a smoker — I don’t really have room to be getting high and mighty on that account.

The reasons I’m excited about joining a co-op are twofold, really: 1. The food (especially the meat and dairy) generally tastes better and 2. I hate what industrial farming has done to the agricultural community. Small farmers need a reasonable amount of support if they are going to be expected to not just pack it in, sell the land and go get a job at a factory (which is a terrific waste of usually generations of handed-down wisdom about the things that we eat and how to make them that is in real danger of disappearing forever). Co-ops help give small farmers and those who don’t or can’t turn to industrial farming methods a fighting chance.

For something that goes way deeper than the surface-level buzzwords on the subject, I really recommend Dan Barber’s book The Third Plate: Field Notes on the Future of Food (which I got through Whatthebook? for what it’s worth). It’s nice to read about the organic movement from a chef who works closely with his farm. Much better than hearing about it from fake ‘nutritionists’ who essentially lord over a peasantry of dieters in denial. Just saying.

Speaking of Dan Barber, I’m not super up on the world of chefs (although taking daylong road trips with two of Korea’s top foreign chefs once a month is slowly changing that), but I first learned about him through a new docu-series called Chef’s Table, which is also worth checking out. I haven’t historically been interested in food as more than, well, food, and a bit for the politics and social implications involved, but this series focuses more on the chefs’ philosophies than the food itself (although, of course, it is featured), which is different from most of the cooking/chef-related shows I’ve seen in the past.

Anyway, I know in the old days I would’ve spent this whole post ranting about the idiocy of the woman at the Ichon branch of Hansalim who took one look at my face and told me I couldn’t join the co-op (when I specifically went there because, seeing the English-language forms for membership on their website, I figured it wouldn’t be an issue) because ‘foreingers don’t stay in Korea for a long time’. Well, and with folks like you around, who can blame them? I put the basket down and walked out. B apparently stayed behind and explained that I was his wife and had been here for nearly seven years, at which point she decided that, actually, I could join (so it’s clearly not company policy, and maybe some people will have better luck at other branches, although a tweet to the main branch about the situation has gone unanswered so far). But you know what? No, thanks. I really only expect things to go downhill from that kind of first encounter, and I don’t think I’d ever really feel welcome at group activities and lectures this woman is in charge of.

I would like to know why me suddenly leaving the country would be a problem for them, though, since they aren’t a phone company. Me leaving and never coming back just means they get to keep my investment. Also, great way to abide by the co-op tenet of community spirit.

So instead, I did a little more research and found iCoop’s 자연드림 (it seems to be a rule with co-ops that the name needs to be some kind of clever pun — this one can be interpreted either as “Nature’s Dream”, which is their English name, or as “From Nature”). They require a monthly membership fee of 13,000 won in addition to the initial 50,000 won investment, but this is because they keep their prices much lower than other co-ops. You can also reduce your membership fee by shopping there often. To put it in perspective, I bought 80,000 won worth of groceries there tonight, but got them for 60,000 with my membership discount — so I already more than earned back my fee for the month. The investment money is also returned when you leave the co-op.

The woman running this shop was extremely kind and helpful, and even slowed down her explanation of the whole system so I could follow. She also explained — as I guess she realized I’m a foreigner and may have more need for imported products — that  they do offer non-domestic items, but only when they are able to broker a fair trade situation and also contribute back into the community they are taking resources out of in the form of community service and donations.

My point is, the Hansalim woman is an idiot who passed up a loyal customer because she couldn’t take five minutes to ask a few questions before making a snap judgment. And in the end, I wound up joining a co-op that I think will be far more likely to make me feel welcome and at home. Even if it is a little farther away.