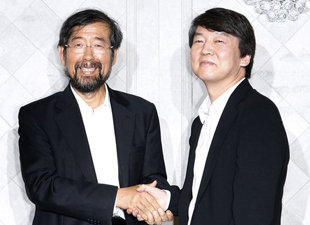 Doctor, software mogul, professor and dean of the Graduate School of Convergence Science and Technology of Seoul National University, Ahn Cheol-soo, has stepped down from his post as dean today due to scrutiny over his public support of then candidate and now mayor of Seoul, Park Won-soon.

The man who whipped the Korean populous into a frenzy when rumors emerged in early September that he would run for mayor, faced intense criticism from the ruling Grand National Party (GNP) over his support for Park. According to breaking news reportsthis afternoon, he was no longer able to maintain his post at Seoul National University given its status as a public university (deans cannot participate in political activity).

The renowned founder of antivirus software company AhnLab, Ahn, 49, holds rock star status among Koreans, especially the youth who have been flocking to his “Youth Concert” events that are held around the country. The events provide opportunities for the young to listen to discussions about social issues at a time when many are disillusioned with the society in which they live.

Ahn reportedly will continue in his position as a lecturer at the university though sources attending the university have reported widespread dislike of Ahn among the faculty at the university because of his brief foray into Korean politics. Earlier in the week members of the GNP warned that Ahn’s public support for Park was inappropriate. “Ahn is a state-run university’s professor, and it is inappropriate for him to participate in politics to support a particular side,” GNP Chairman Hong Joon-pyo said. “If he wants to indulge in politics, he must give up his faculty post and enter politics.”

It remains to be seen what other fallout will occur after Park Won-soon’s victory over GNP candidate Na Kyung-won in an ugly race for the Seoul mayoral post which followed the resignation of former mayor, Oh Se-hoon, over a free lunch initiative proposed by the liberal Seoul city council. On his first day at work yesterday,Park approved the bill for free lunches.