What is it that made me not feel hopeless within the first 10 minutes of waking up this morning?

Was it the therapeutic walkabout, conversation and McDonald’s meal with kindred spirit AW after school yesterday? 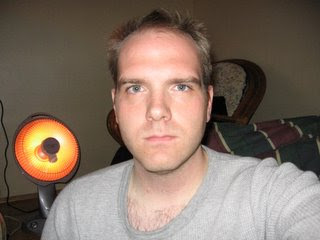 Taken in December 2005 in my apartment in Jinju, South Korea, on one of those nights spent too far inside my own head and too far back in the States. I loved that heater. It cast the weirdest glow on the room whenever I woke up at 3:30 a.m., which was often.

On day 41, 2005, I was unwrapping Christmas presents at Dad’s and recovering from jetlag.

So, now it is official: I have officially been in Korea longer this time than I did five years ago. Glad that’s finished, let’s go home!

I had a lovely exchange this afternoon with my landlord and who I think is the maintenance man for this apartment building, who both came up after school because of what could only be described as a “merciless fucking bad smell” coming from the sink. Seriously, a couple nights ago, I walked over to it, sniffed, and nearly swooned. Last night it got so bad, I woke up from it and had to open a window even though it was cold out. That’s how bad it was.

When the three of us popped up at around 5p.m., sure enough, there was no smell. None. I sniffed it deep; I did not pass out.

… however, the computer says it’s still 6:30 a.m. EST because I have not gone online yet in South Korea for it to correct itself.

To fully understand the gravity of that statement, you need to, well, you need to be me. Or, you need to have done something, pull out early, only to one day wonder if stopping so soon was doing a disservice to yourself, if only because you knew that thing you were trying to accomplish was not the reason for your departure. South Korea was not the problem. There was no problem, per se. It was timing, I guess. It was… whatever. I could try to explain it forever, but it would still come back to what I already said: you had to be there.

I finally got a table.

It’s in the contract: teachers will be provided with the basic necessities, which includes a bed, refrigerator, television (a necessity?), a microwave, and a table. But, when I came to Busan on March 1, one thing was noticeably absent. I can understand, I suppose; this apartment is the size of the bedroom I use to occupy in New Jersey. Could a table possibly fit in here?

It can. And, even better: it has made this box into a home.

I do not want to fall back into old patterns.

Today, Sunday, was dreary in Busan, South Korea. I woke up on a burning hot ondol (underfloor) heated floor at CC’s, a person I met in orientation. A number of us went out to Haeundae Beach for the Moonrise Festival, which welcomes in the new moon and spring. Basically, it’s an excuse for a giant bonfire to burn on the beach and for revelers to revel soundly. I certainly did.

Without a computer, I have had limited access to the Internet, which I am somewhat saddened will come to an end when I head to Busan on Friday. I could always just say I won’t get Internet for my apartment, but that would be a lie.

Tomorrow we have our 15 minute presentation in front of the class. Means nothing, and everyone was getting so worried, but it’s simply an opportunity to try it out, see what works, see what doesn’t, in front of a class. Then we meet our POE’s. Then, the powder keg will blow again. Someone outside of the 7-11 (yes, they have those here) said over a beer (yes, you can drink those outside here) said it was a shame they would not lift the 1am curfew for our last night at Jeonju University. Really? If they, some people might not be coming back to campus alive.

People are waiting for the public computer here at Jeonju University so I will keep this brief.

I am back in South Korea. Kimchi for breakfast, lunch and dinner. It’s good to be back.

More as this develops.

Finally, things are starting to settle in. When it’s just another day, it’s hard to get motivated for something still in the future. But, when you start preparing for that future event, it begins to impress both your conscious and subconscious. You’re not going to be here this time next week. You’re not even going to be here this time Tuesday. You’ll be on a plane bound for the other side of the world.