I had the pleasure recently of watching the 25th Polar Bear Swimming Contest on Busan’s beautiful Haeundae Beach. 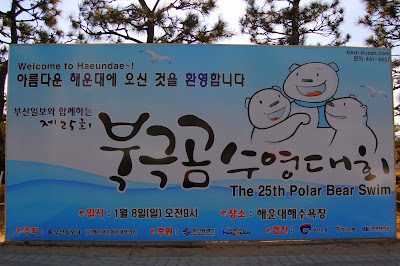 When many people think of holiday lights in Korea, they often imagine the festive lights at Seoul’s Myeong-dong Cathedral, or the Christmas display inside the lobby of Itaewon’s Hilton Hotel. For those of us living or visiting further south, Busan’s Nampo-dong offers a beautiful annual holiday display called ‘The Christmas Tree Cultural Festival,’ and it draws crowds for both shopping and photos from December through early January. 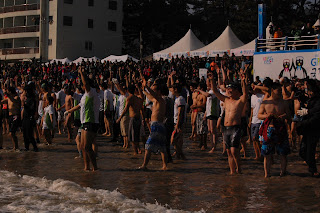 On January 7th, I had the pleasure of participating in the 8th Annual Geoje Penguin Swim Festival. This festival was just so much fun, and definitely one of my favourite experiences in Korea thus far!

I am so happy to announce that as of January 1, I am now a World Korea Blogger. I applied and have been chosen to wrote about Korean culture for the government of Korea. I am very honoured to have been selected.

I look forward to my next year of blogging and to meeting the other bloggers or WKBs. I can’t wait to see what adventures Korea Blog has in store for us, and to seeing what the rest of the year brings. So thanks again to Korea Blog!

It’s the last day to select this year’s World Korea Bloggers (WKBs). And I say pick me.

I have visited your Facebook site and the Korea Blog everyday since entering this contest. I am by far the most active applicant in terms of comments, wall posts, and “likes.” My application wall post on your Facebook page has garnered 29 “likes”! As you can see, I am very active in social media, and exactly the kind of person you want for The Korea Blog.

I landed in Taipei late Monday night from Busan. My flight was fast and comfortable, and I had no problems navigating the airport. I grabbed a taxi, barely uttering my directions in (some version of) Chinese, and was on my way.

Basically, the 45 foreigners provided live  entertainment for the small town of Geochang for the entire weekend. We were followed everywhere by Koreans and their cameras. An amusing weekend, indeed.

After a 3-hour bus ride from Seoul, we landed in Geochang. We began the day by enjoying some traditional Korean games and sampling the local black raspberries, one of Geochang’s best-known exports. 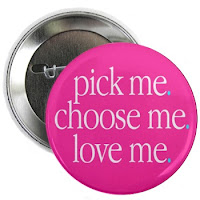 I know my blog might not look like much, but I made it in just one day so that I too can be a Korea Blogger!

I am perfect for your blog. I am dedicated, passionate, and responsible. I am well-travelled and insightful, and I am hard-working. I understand the responsibility you will be giving me, and I am so excited to take it!

I make daily updates to Facebook, and update my Twitter several times a day. I have been writing about Korea for two years, and now I want to write for the Korea blog.