﻿I interrupt the Halloween themed news to bring you my latest love, Royal Cupcake in Cheongdam.
﻿I interrupt the Halloween themed news to bring you my latest love, Royal Cupcake in Cheongdam.
Cupcakes themselves are not a new love for me. I was previously a big fan of Good Ovening Cupcake store but in recent months I’ve started to notice it going downhill. When I first sampled their offerings, a couple of years back, they were much softer, prettier and even a tad bigger. Now it’s a bit hit and miss depending on the day you go. A good day and they’re fine but get the wrong day and you could end up with a dry and crumbly cupcake. Not the funnest gambling ever. The decorations have become less and less colorful lately too. I don’t know how you feel about this, but I feel pretty passionate about cupcakes and believe a cupcake should not only taste great it should look great too. That’s the whole point really, otherwise you might as well just get…well…cake.
I was still going to Good Ovening, playing the cupcake lottery, because…quite frankly…I didn’t have a better option! You’ll see a lot of imposter cupcakes (cream topped sponge buns, hate those little cheats) in Seoul but the real deal butter-cream type are not that common.
I finally found my answer. Royal Cupcake. The cupcakes are simply put…incredible! The cake part is soft, springy and light. The buttercreams come in a variety of different flavours and are all so smooth you wonder how they do it. Not only are the cupcakes pretty as can be but the store itself is exactly how a cupcake store should be, truely charming. It’s very whimsical and girly. Not the place for a guys trip but bring your date or girlfriend here and she’ll be smitten, I promise!﻿﻿﻿ 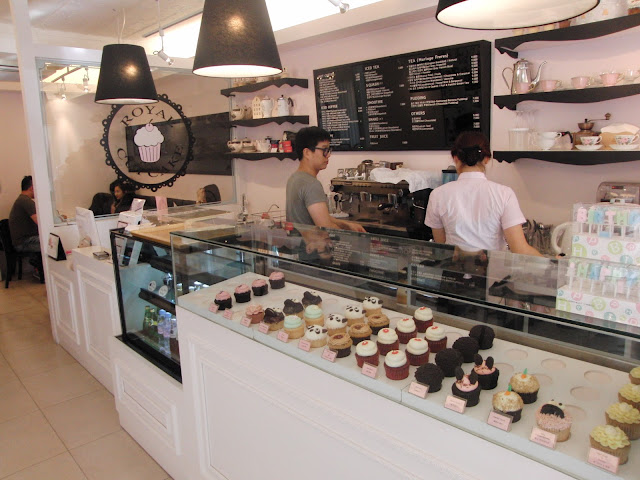 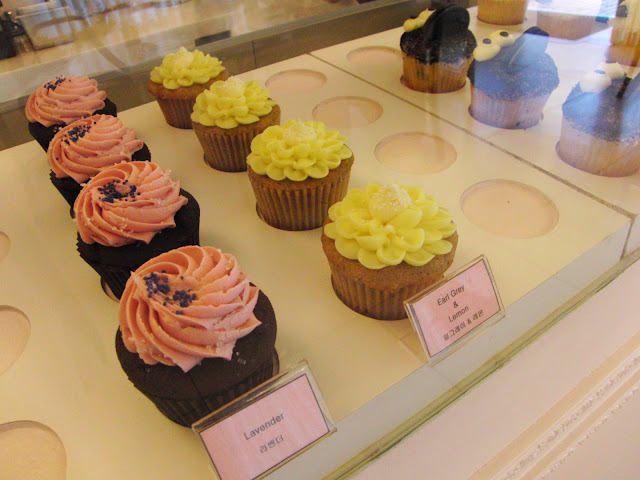 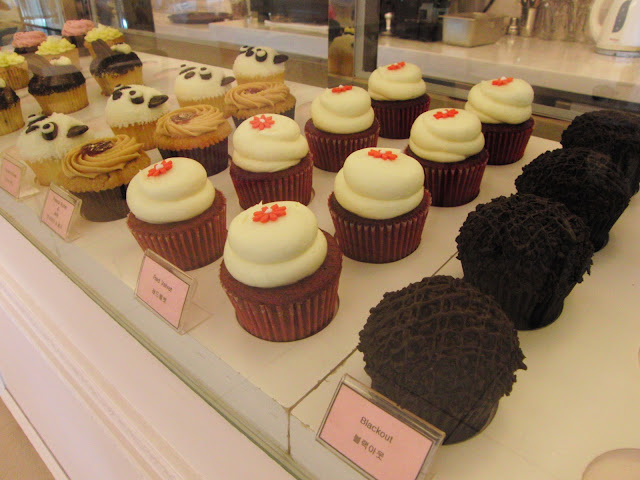 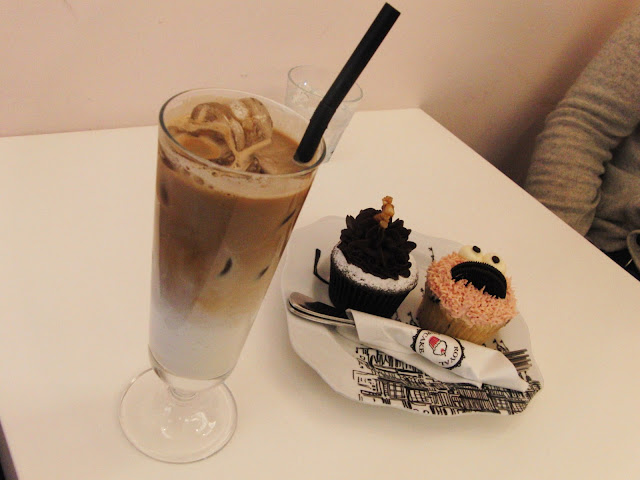 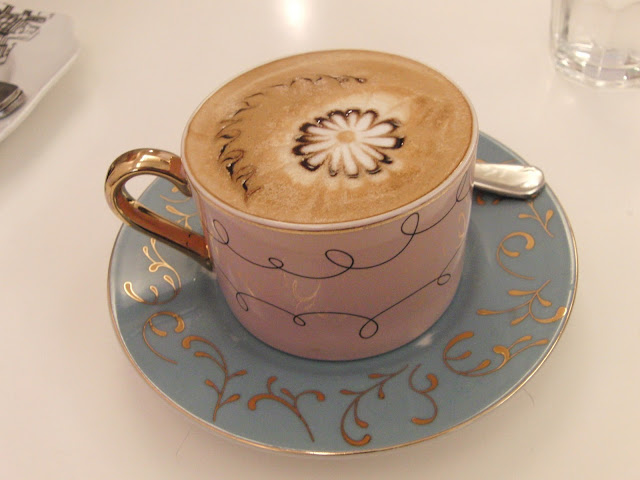 Isn’t that the prettiest cup of coffee you’ve ever seen?! I think the point that they placed that drink down in front of me was when I realized I was in love with this place.
I was surprised that despite being right in the heart of Cheongdam’s most expensive area the cupcakes were priced the same as other stores around Seoul. All were 5,000 won. Drinks come in a little more expensive than you’re average coffee shop but this isn’t your average coffee shop. The coffee, although obviously overshadowed by the cupcake just a tad, was delicious. It cost 8,000 won. They do have some drinks choices for a little less. Along with coffee they also serve a wide variety of teas, smoothies, frappes, shakes and juices.
All of the cupcakes are baked freshly on sight. Even during the short time I was there they made a few new ones. They don’t make them in large bulk loads but just a handful at a time which helps ensure you don’t get anything but the freshest most scrumptious cupcake. 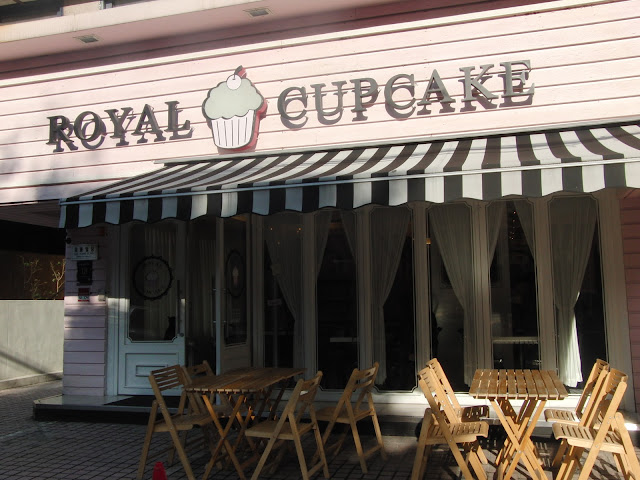 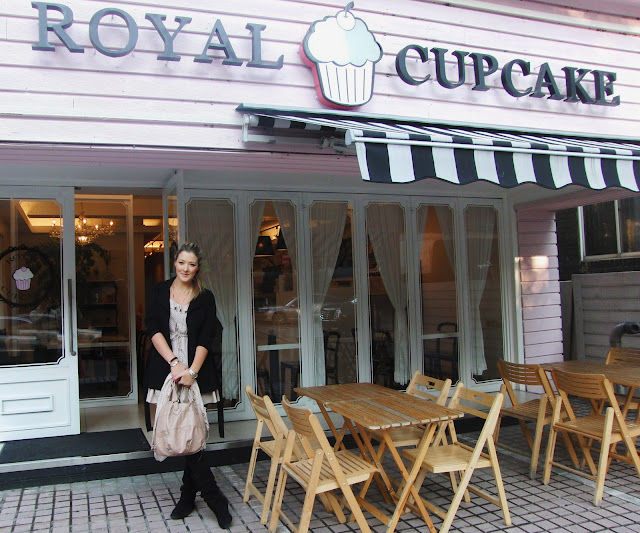 ﻿So where is this little slice of heaven?
How to get to Royal Cupcake.
Address: 99-9 1F Cheongdam-dong, Gangnam-gu, Seoul, Korea.
Telephone: 02 540 8918
Website: http://www.royalcupcake.co.kr/
Take subway line 7 to Cheongdam station. You’ll need to leave through exit 8 and then follow this map.
View How to get to Royal Cupcake, Cheongdam, Seoul. in a larger map
As always please make sure you follow Seoulsome on Blogspot or find Seoulsome on Facebook!
Enjoy!