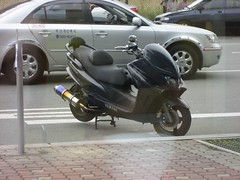 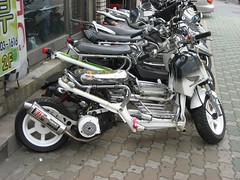 Anyone who’s lived here for more than a couple of weeks will probably have become used to the blatant use of pedestrian areas such as sidewalks/pavements as a more convenient off-road route. That is, as far as it’s possible to learn to live with suddenly finding a large and sometimes previously unheard machine whizzing by your arm at 20mph. But lately, I’ve noticed that the major road outside our apartment seemed to be doubling up as a racetrack for bikers after midnight. At least, that was my theory – the enormous apparent speeds involved prevented me from getting up from my chair and reaching the window in time to actually see the physical evidence for this, even if the noise from engines and customised horns told its own story. They’ve also woken me up just after dawn, apparently doing racing laps of the local district, judging from the fading and crescendoing engine sounds echoing around the valley we live in.

Curious, I stopped to watch a group who I noticed were pulled into a petrol station nearby recently. It was impossible to see what kind of people they were (very young, I suspect) or what kind of bikes they had because it was too far away and too dark, but the numerous coloured LED lights on the back of their machines were unmistakable. I came back to the window a couple of minutes later as they headed off down the road with engines roaring. That’s when I saw one of the rear lights wave around wildly and unmistakably crash to the floor. There was now a bike sliding along the road in a small shower of sparks, while nearby the dark shape of its former rider tumbled along next to it. I lost track of him in the darkness, but saw him again when he hit the back of a stationary car in a small cloud of smoke. I don’t know what speed he was doing when he came off, but rider and machine had perhaps slid around 40 feet by the time it ended. 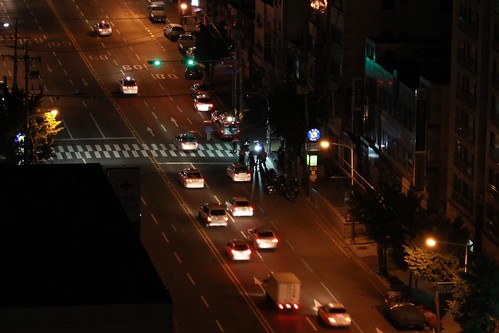 The ambulance came about three minutes later, and not long after that, the police arrived. I expect I’ll never find out whether the rider was seriously injured. Back in England, I had a biker friend who once told me in excruciating detail of the perils of not wearing protective leathers in a similar type of accident, but here in Korea, with the temperature outside at midnight 21 degrees Celsius, what kind of clothes do these biker youths wear? Probably not the the proper gear, I expect. Laceration injuries may not be the rider’s biggest problem though, given what I’ve since seen of other late night bikers, it’s very unlikely he was wearing a helmet.

It’s getting bad during the daytime as well, in a way I never really remember occurring before. It was always the case that the sensible pedestrian lets a couple of people venture out onto a crossing when the lights change to provide a target for the drivers who regularly race the lights or simply don’t notice them change. But recently a couple of motorcyclists have blasted through crossings I’ve been at long after lights have changed and people have been mid-way across the road. A couple of days ago, I realised how deliberate this was when one rider revved his bike and speeded up as he shot through a gap in a group of rather surprised people at about 50mph. It was close enough that I could feel the rush of wind as he disappeared up the road at great pace. Sooner or later someone will, of course, get killed and then there will be some blood money to pay and maybe a bit of prison time if they’re unlucky.

What seems really intended to stick two fingers up at ‘the man’ is ignoring the civil defence drill. I often watch these unfold below me – there’s something slightly comedic about the idea that during a real attack elderly women will take to the streets and blow their whistles at both vehicles and pedestrians which don’t come to a halt. Usually I see drivers try to reach the safety of side streets where they can continue their journey, or at least position themselves a few more feet down the street to cut their post-alert journey just that little bit shorter. Pedestrians meanwhile, are sometimes harangued, apparently depending on the mood of the official.

So during the last drill, for the first time, I saw someone who’d openly decided to flout it. It was, of course, a biker, who put in the following performance – if you listen carefully at the end, you can hear the whistles being blown pointlessly as he disappears into the distance: 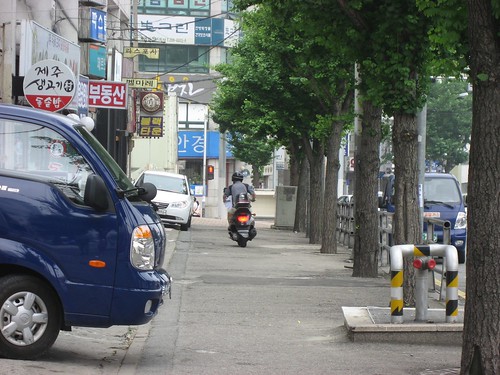