Our two year adventure in Korea has come to an end.  The family is now back in the US.  My good friend, Lieutenant Colonel Samuel “Tripp” Blanton and I took over our commands two years ago on 20 June 2008 in a joint change of command ceremony – “joint” meaning Army and Navy.  I’m of course with the US Navy and the Commanding Officer of MSCO Korea.  Tripp is the Battalion Commander for the US Army’s 837th Transportation Battalion.  On that rainy day in 2008, the ceremony was held onboard the USNS POMEROY.  Unfortunately, the weather wasn’t great so we held the ceremony inside the ship on one of her decks.  It was a very nice event even though we had to revert to our inclement weather plan.

Our two year adventure in Korea has come to an end.  The family is now back in the US.  My good friend, Lieutenant Colonel Samuel “Tripp” Blanton and I took over our commands two years ago on 20 June 2008 in a joint change of command ceremony – “joint” meaning Army and Navy.  I’m of course with the US Navy and the Commanding Officer of MSCO Korea.  Tripp is the Battalion Commander for the US Army’s 837th Transportation Battalion.  On that rainy day in 2008, the ceremony was held onboard the USNS POMEROY.  Unfortunately, the weather wasn’t great so we held the ceremony inside the ship on one of her decks.  It was a very nice event even though we had to revert to our inclement weather plan.

Fast forward two years.  On 25 June 2010, MSCO Korea and 837 Transportation Battalion held its joint change of command ceremony onboard the USNS WATSON at Pier 8, Busan.  Our two commands have worked together closely over the last two years to get our missions done so it made a great deal of sense to do a combined event.  The change of command ceremony is a time honored tradition that formally transfers the authority of command from one Commanding Officer to another.  For many CO’s, it is an emotional time, one of reflection and thanks.  This ceremony held special meaning since it coincided with the 60th Anniversary of the Korean War.  What better way to do this joint event than on this special anniversary onboard a US Navy ship named after a US Army medal of honor recipient, Army Private George Watson.

The weather was perfect!  During the rehearsals, the sun was beating down hard to the point where people needed sunblock and water bottles.  We were concerned that it was going to be too hot.  The cloud cover and temperature on the 25th was great.  The wind was relatively calm.  It made for a great ceremony and a memorable day. 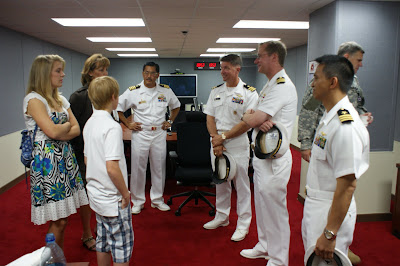 The official party gathered in the conference room in the morning.  This was our rallying point prior to heading to the bridge of the ship for a private awards ceremony.  On the left is Tripp’s family.  The MPSRON 3 Commodore, Captain Awai is in the middle with the glasses.  CDR Dave “Face” Bartell is next to him.  He’s the new CO that replaced me.  My former boss, Commodore Denman is next to me. 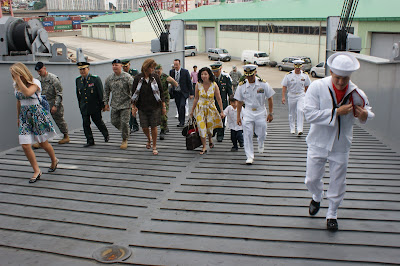 Here we are heading up the stern ramp of the ship.  The USNS WATSON is an LMSR – Large, Medium Speed Roll on / Roll off ship. 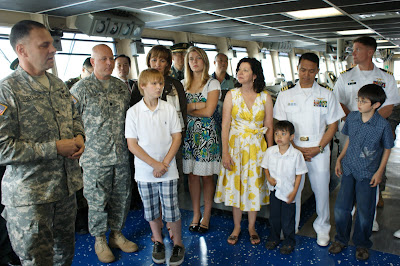 We decided to do a separate awards ceremony on the bridge of the ship prior to the change of command to save time during the big ceremony.  Because of all the speakers in our double ceremony, we were looking to save time wherever we could.  It’s typical for the outgoing commanders to receive “end of tour” awards, even knuckleheads like Tripp and myself. 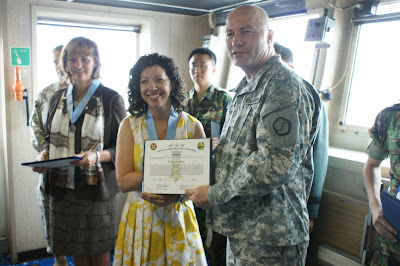 Brigadier General Harvey, Commanding General of the 19th Expeditionary Sustainment Command, also presented two high level volunteer awards to both Marty Blanton and Carol.  They’ve both done so much for the Daegu and Busan communities respectively.  Really proud of Carol and all that she’s done volunteering with the two orphanages, BIWA, church Sunday School, being the Busan Foreign School PTA President and her work with other community associations.  Very well deserved for both ladies! 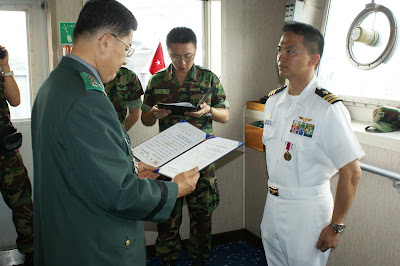 Colonel Yoon, Commander of the ROKPOG, also presented awards to Tripp and I from the ROK Transcom Commander, Brigadier General Lee.  The strong relationships we were able to forge with the “Triad” – MSCO Korea, 837 and the ROKPOG is something that I’ll always remember.  That’s Corporal Lee translating in the background.  He did such a great job with helping us bridge the communication challenges we faced. 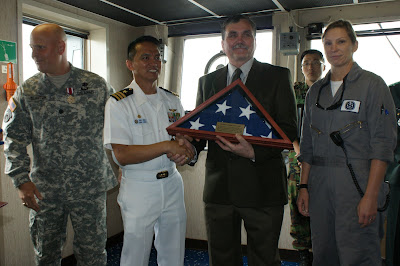 Tripp and I presented special flags that were flown over Pier 8 on the 60th Anniversary of the Korean War to the Master of the USNS WATSON, Captain Chris Larkin and to General Harvey for all of their help with the ceremony. 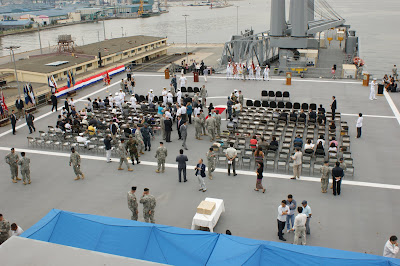 The ceremony was held on the flight deck of the ship.  As an aviator, I thought that was very appropriate.  Here’s the scene before the crowd shuffled in.  The yellow building to the left is where my office is (was). 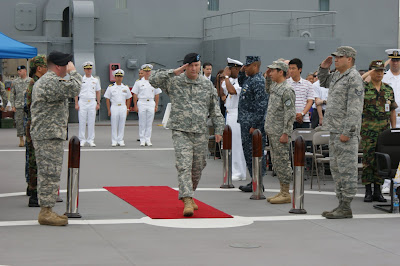 This unique ceremony featured traditions from both the US Navy and Army.  Per Navy tradition, the official party was “whistled in” with an important piece of nautical gear called a boatswain’s pipe.  Chief Boatswain’s Mate Albert Henderson did the honors with the whistle while one of our Navy Reserves rang the bell as the high ranking officers were announced.  Sidebuoys composed of members from the US Army, Navy and Air Force as well as the Korean Army and Korean Service Corps, flanked the entrance area where the official party would be “piped” in.  Here is General Harvey being piped aboard. 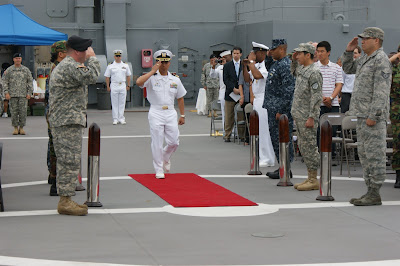 One of my last memories as CO 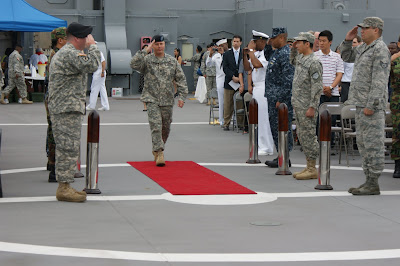 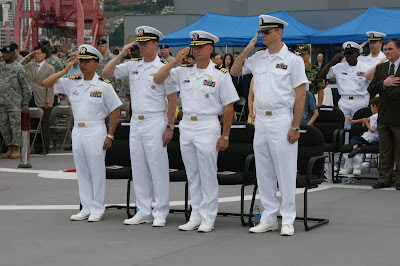 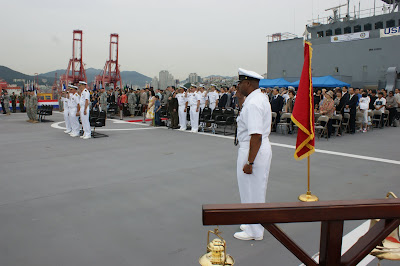 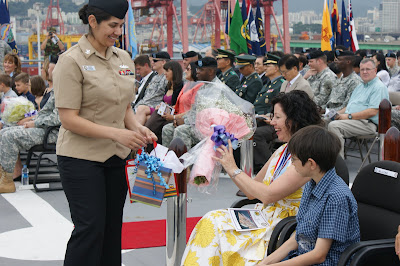 Petty Officer Ritchie presenting flowers to Carol and gifts to the boys on behalf of the command. 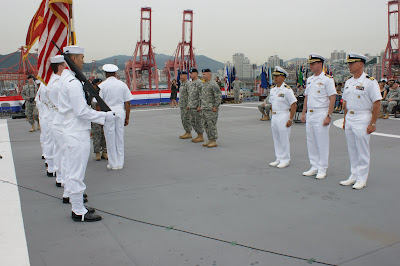 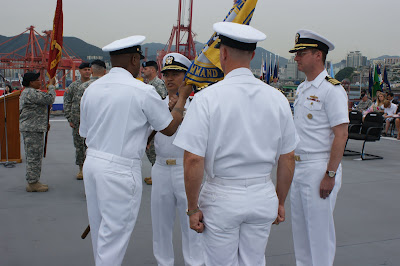 The passing of the colors is an important Army tradition.  Historically, military leaders would use a visible symbol around which members of their command could rally.  The colors (or flags) stood as prominent symbols of the commands themselves.  Here I am taking the MSCO Korea colors from my Command Chief. 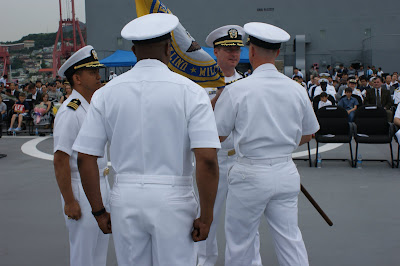 Commander Dave Bartell now takes the colors from the Commodore. 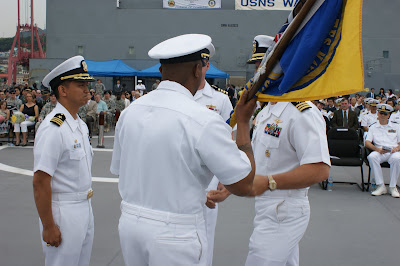 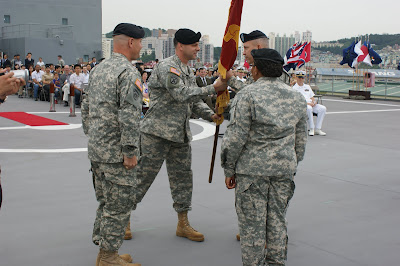 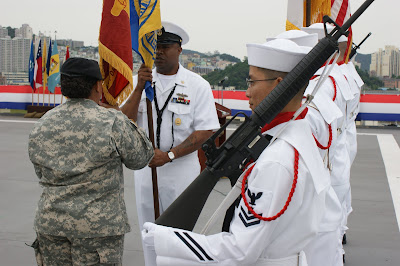 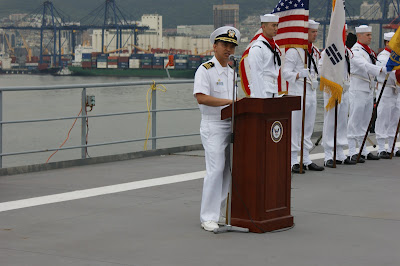 I’ve given many speeches over the years but this was one of the most emotional for me.  I went longer than I wanted but it was very important for me to acknowledge those that made this tour possible. 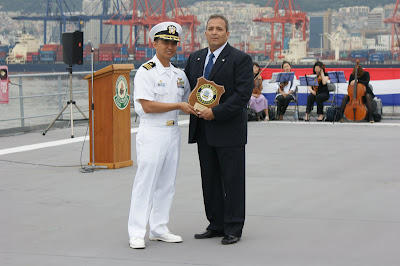 At every change of command, MSCO Korea recognizes one individual within the command with the Memorial Leadership Award.  This honor went to Mr. Xavier Monroy. 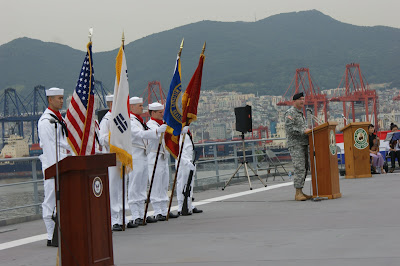 We were honored to have General Harvey speak at the ceremony.  He was extremely kind in his remarks about Tripp and I.  He has been a true friend to Pier 8 and Busan for many years. 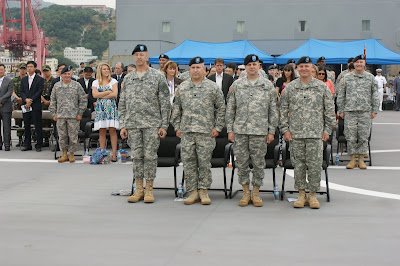 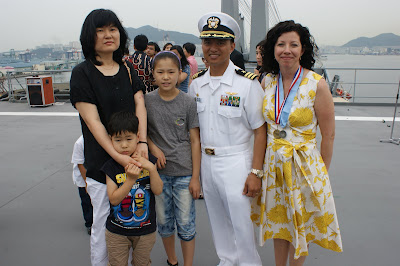 This is Ms. Chon Won Hui, the widow of Mr. Kang, one of our Marine Transportation Assistants that passed away in June 2008 due to a massive heart attack.  His memory lives on with the MSCO Korea Memorial Leadership Award.  We were honored to have her and her children at the ceremony. 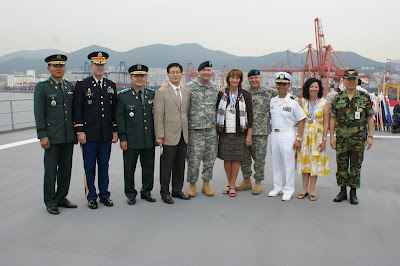 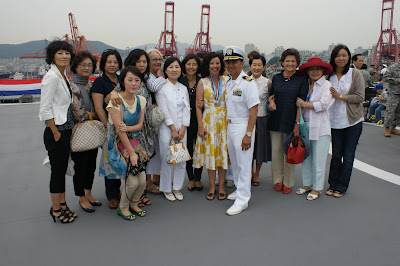 With members of the Busan International Women’s Association (BIWA) 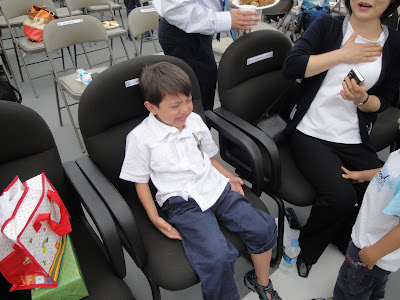 Jake having a moment 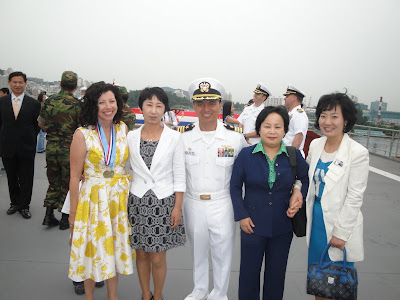 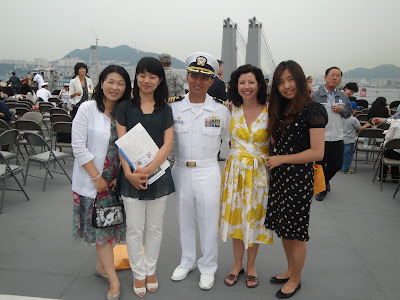 I won’t forget these lovely ladies!

The ceremony wouldn’t have happened without a lot of hard work from many people.  Thank you XO, X, Chief, the entire staff, Sergeant Major Shakespeare, Wendy, Kemmeh and all of the others that made this event such a success.  I know I was a pain about many things.  Thanks for putting up with me.

It was really great to see people from so many different groups in attendance – the various military commands from Busan, Daegu and Chinhae, Navy Reserves, Korean Service Corps, BIWA, Sung Ae Won and Miewon Orphanages, KABA, KAPA, People to People International, friends from church, Busan Foreign School, my Filipino brothers and sisters, neighbors and others.  But most importantly, it was great having Carol, CJ and Jake there.  Two years ago, the family was still in the US when I took the reins.  It was too difficult for them to be here due to school and other reasons.  Glad I had the opportunity to thank them in person for their great support.

And so now I close a chapter to an incredible part of my life.  Who knows what the future might bring?  I might be saying “Anyung Hasayo” sooner than I think.  Or in my case, “Narang Chumchupshida!”  As the Koreans like to say, it isn’t good bye – just so long for now…