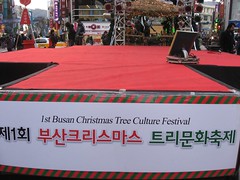 As we entered the main shopping area of Nampodong the hymn O Come, O Come, Emmanuel echoed around the streets. It was easy to believe for a moment that the sound emanated from one of the many nearby stores, which are never averse to using external speakers to capture the attention of those nearby, but this time the sound had a vastness to it belying a merely local source. Every street lamp for half-a-mile had a speaker, and every one played Emmanuel.

As we entered the main shopping area of Nampodong the hymn O Come, O Come, Emmanuel echoed around the streets. It was easy to believe for a moment that the sound emanated from one of the many nearby stores, which are never averse to using external speakers to capture the attention of those nearby, but this time the sound had a vastness to it belying a merely local source. Every street lamp for half-a-mile had a speaker, and every one played Emmanuel. Amidst the hustle of a Sunday’s afternoon shopping in Busan, the calmness of the hymn seemed to trick the eyes into slowing down the movement before them. It was something simple yet extraordinary to experience, and was only slightly detracted from by the particularly strong odour of raw sewage – which one is never far away from in Busan – permeating the air. All this money spent on events – but they’ll never fix the drains.

Nampodong, perennially locked in a battle for economic supremacy against its great rival Seomyeon, hardly needs an excuse to do anything, but on this occasion the speakers were here, and we were here, for the ‘1st Busan Christmas Tree Culture Festival’. Whether this truly is the inauguration of an event that will be here twenty or thirty years from now I cannot say, because Korea appears to create so many festivals one wonders how they can all be continually supported, although the Festival Festival has yet to be announced. One day, you know it will come.

While there had possibly been some activity on the stage in the central square before our arrival, this is really an event designed for the evening, and it was suitably dark when we returned after eating at a nearby Italian restaurant. The first impression was that while this may be called a ‘Christmas Tree Festival’, this mainly translated into putting lights in the trees that are planted in the area, rather than something more concerned with traditional Christmas trees as we think of them in the West. In fact, there were lights everywhere from the lampposts to the plants, which certainly created an atmosphere. Floor lighting, embedded in the streets, cycled through various different colours. 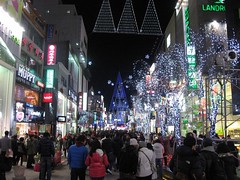 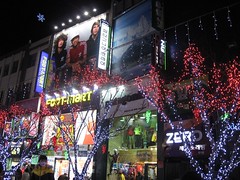 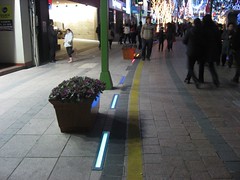 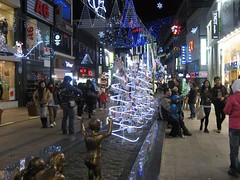 Stuffed reindeer shared the street with reindeer lighting, while trees and plants hung with individually written messages, presumably of a festive nature. 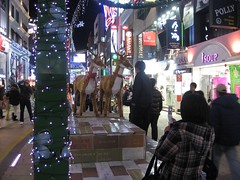 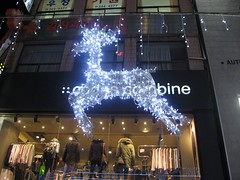 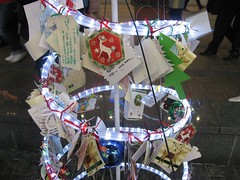 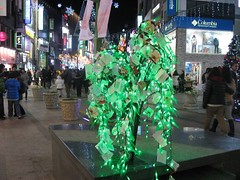 At the far end of Nampodong’s main shopping street one comes face to face against the consumer paradise that is the new Lotte Department Store with its large anchor motif, which opened amid chaotic scenes earlier in the week. Coverage of the continued apparent dog eat dog madness inside on the local TV news has been so heavy, I felt no great desire to investigate it, and was instead content to photograph its Christmas lights from the other side of the road. Still, this is the store that will revitalise Nampodong – so goes the promise – not that it particularly seems to need revitalising – you’d never know there’s been a terrible global recession on the evidence of the volume of people here in the last three years. 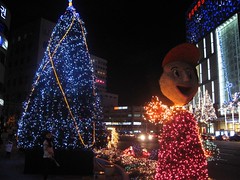 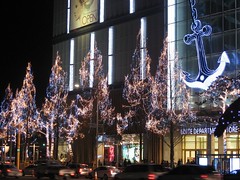 We worked our way back towards the square, where on the stage children were dancing to Korean rap music, possibly in the ‘popping‘ style or some other such technique that I couldn’t care less about after seeing it so much here. Worse, if I followed the English lyrics correctly, they might have been doing it for Jesus! The great truth about a lot of these new Korean festivals is that whatever the theme in my experience, they often quickly descend into anything-goes stage shows, often involving rap, which since moving to Korea I’ve developed a real aversion to. After the young Christian rap-dancers, we had a complete change of pace – switching into a traditional Korean ‘Sogochum‘ (소고춤) – or 소 (small) 고 (drum)춤 (dance). It was hard to see a link between this and the ‘Christmas Tree Festival’ event title, but nobody cares, and as they danced their hearts out in sight of the ‘Frisbee’ Apple store, I was glad of it too – I fear the day will come when this aspect of Korean culture drowns in a sea of K-pop and K-rap. 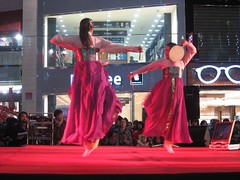