After our visit to the Mario Outlets at Gasan Digital Complex, my mind (which habitually strives for logical ideas) has developed a new appeciation for fashion. Is this normal for a poverty stricken molecular biology student who grew up on hand-me-downs and is proud of the various stains on his white labcoat?
Sure, I think. 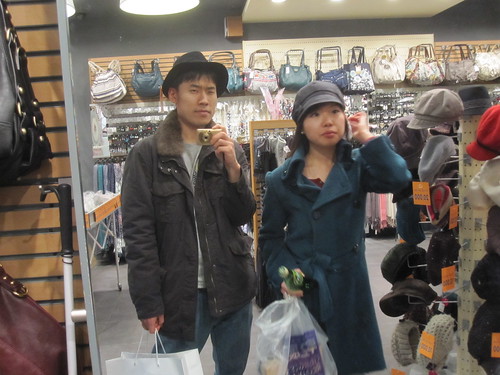 After our visit to the Mario Outlets at Gasan Digital Complex, my mind (which habitually strives for logical ideas) has developed a new appeciation for fashion. Is this normal for a poverty stricken molecular biology student who grew up on hand-me-downs and is proud of the various stains on his white labcoat?
Sure, I think.

There’s a fuzzy line between what consitutes unreasonable spending to compensate for social insecurities versus creative representation of personal identity. I guess that particular fuzzy line is defined by how much your wife is willing to let you spend. Heather and I almost never wear hats, because it seems that we weren’t endowed with heads that complement them very well. Except for when I wear my wide-brimmed farmer’s hat while inoculating down in the rice fields of Suwon.
But that’s specifically to keep the sun off my noggin, not to impress the fantastic agricultural ajummas who patrol the area in gumboots. 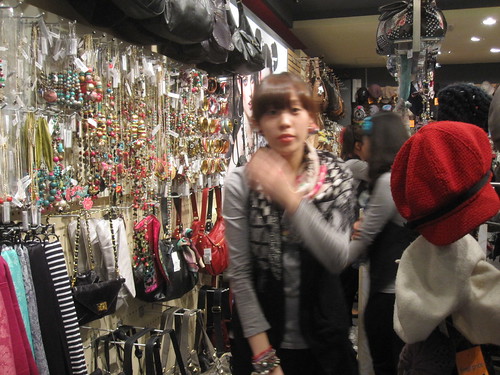 This young shop assistant at COEX was energetically explaining to me that I was not to take photos in their shop, and she would have been indecipherable had I tried to understand from her hand signals alone. Because we just had a pitcher of beer in a bar called Jug, I was feeling a little silly. So I played the wide-eyed foreigner card and pretended to misinterpret her instructions into thinking that she wanted me to take a photo of her. Hilarity ensued. 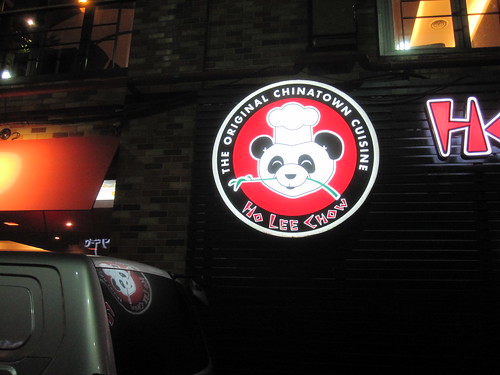 Delicious Chinese cuisine has infected the world like a benevolent virus. The early immigrants to the first Chinatowns overseas went through many hardships and it’s likely that their cooking skills played a critical role in helping them to respectfully survive in their new home countries. The flavours of authentic Chinese cooking across the globe changed as cooks adapted to local preferences and regional ingredients. Interesting self-reflections of the host country can now be seen in  many dishes, from fried ice cream to pineapple cooked with chow mein.
Ho Lee Chow is an American Chinese restaurant chain with a few outlets around Seoul. They’re one of a very few number of establishments willing to sell Chinese food that consists of things other than jajangmyeon, which is the Korean interpretation of Shandong fried noodles. Funnily enough, Korean style jajangmyeon is becoming popular as a foreign food in China. 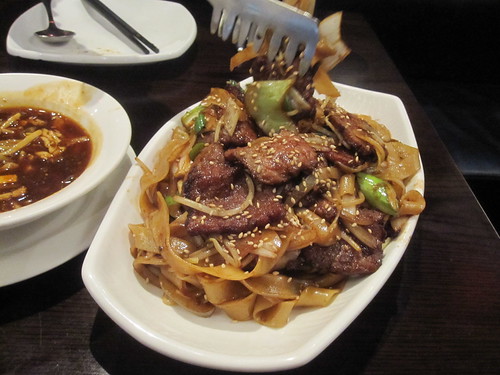 American Chinese food has also evolved from its origins, with dishes like sweet and sour pork, lemon chicken and Szechuan beef being staple favourites. These are all available at Ho Lee Chow, along with a complimentary pot of black tea. The photo above shows their interpretation of beef char kway teow, which we ordered out of pure curiousity.
Char kway teow, being a dish we specialised in at the Casuarina Malaysian Bistro, is difficult for me to consume without a degree of overanalysis. To be nice, these ones weren’t too bad, but realistically they fell short of the real deal. They had a fairly good smokey flavour from a high wok temperature and the beef was quite good. But the noodles suffer from being reconstituted from the dried import form and there was an overabundance of two kinds of onion. Char kway teow really needs fresh noodles like those from Taings.
Still, they get full marks for being the first place in Korea to offer the dish in the first place. 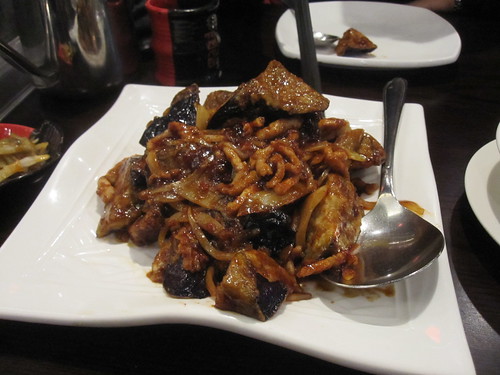 The other main dish that we ordered was fried aubergine. I like using the word aubergine as much as I like using courgette. This was quite good, with a tangy base for the sauce and not overly greasy from the deep fryer. The trick for crispy rather than greasy foods is to make sure the oil is searing hot when you pull the food out of it. That way it will be highly motile and can be easily drained with a sieve. Colder oil sticks to the food due to its viscousity at lower temperatures. 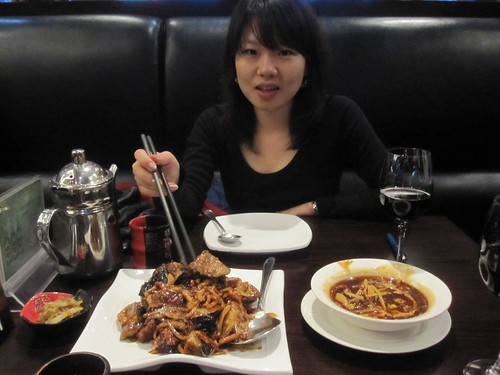 We also ordered hot and sour soup, a personal favourite. This was also done well and I  enjoyed the bamboo shoots. Heather quite liked the food here and the service was quick and friendly. For those missing Chinese flavours from home, Ho Lee Chow is worth a visit. 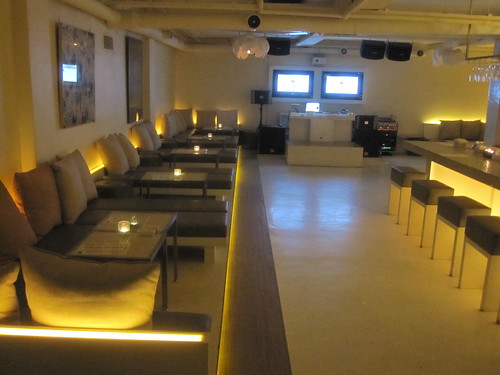 After eating slightly more than is reasonable for two married primates, we walked around to find a nice place to sit back and digest. We found this bar in the basement floor of the nearby MyThai restaurant, called MyBed. It was opened recently by the same owner, Hong Seok-Cheon, an actor who stunned our quaint little peninsula a decade ago by becoming the first South Korean actor to come out as a gay man. He was shunned by the industry and much of the public and soon found himself unable to get employment. So he opened a restaurant, and then a karaoke bar and has since become highly successful with multiple renowned establishments to his name.
Well, good on him, too.
Oh, and the cocktails here are pretty good.