In our ongoing attempt to pretend that summer isn't over, Shane and I descended upon the freezer case of the Samsung Big Mart downstairs. We set out to taste our way through the popsicle freezer case. Yes, there is a freezer case devoted almost entirely to individually sold popsicles (and also a case for ice cream). Here are the fascinating results:

In our ongoing attempt to pretend that summer isn't over, Shane and I descended upon the freezer case of the Samsung Big Mart downstairs. We set out to taste our way through the popsicle freezer case. Yes, there is a freezer case devoted almost entirely to individually sold popsicles (and also a case for ice cream). Here are the fascinating results: 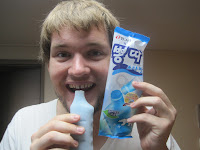 Popsicle One:  Ppongtta (??) Soda Flavor
Flavor: A cross of cotton candy and Dreamsicle
Impression & Comments: It's a bit awkward to eat out of the plastic, which is shaped almost like a baby bottle, but that awkward plastic also made for no side drippage.
The Verdict: Shane would eat another right now if he had one. Awesome and creamy! 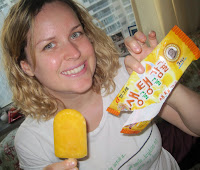 Popsicle Two: Saengtaeng Citrus
Flavor: Chunks of Jeju tangerine right in it. The bar tasted like frozen juice, very vibrant flavor and color.
Impression & Comments: The wide base made it hard to finish off at the end without messing myself. But it's only 65 calories!
The Verdict: I feel like I've missed out for the past year since it's taken me this long to taste the happy.

The Verdict: I totaallly crushed it! Even with the ice milk in the middle, it's still a totally legit popsicle! 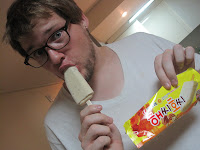 Popsicle Four: Haessihossi
(I can't translate this, I have no idea)

Flavor: Walnut. Tastes like butter pecan ice cream with some bitable sunflower seeds in it.
Impression & Comments: Holy camoly, this is so good!
The Verdict: This popsicle brought out the expletives in Shane, in a good way. 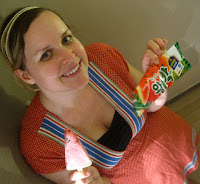 Flavor: Watermelon
Impression & Comments: It's not great. The chocolate-covered sunflower seeds taste old, and the popsicle tastes candy-like with a syrupy flavor. The look of it is the best part.

The Verdict: I've have had better watermelon popsicles before, so I should have opted for the other brand. Not worth finishing. 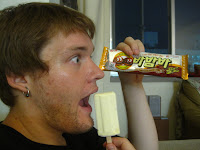 Popsicle Six: Babambar Gold
Flavor: Pieces of chestnut on it, which was nice, but not a lot of flavor to this guy

Impression & Comments: … a surprise in the middle…. it's like a white sweet bean paste…..ugh disappointment….

The Verdict: Shane just wanted to eat the outside and leave the white bean alone. 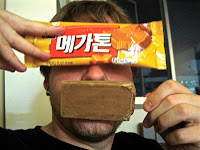 Popsicle Seven: Megaton (?? my translating skills stink)
Flavor: Caramel awesomeness
Impression & Comments: It has a good burnt sugar flavor and smell. This bar has a nice and creamy meltiness without making a mess

The Verdict: It's just so good. The caramel bar is one of my go to favorites when I need something sweet. Shane says, "Mmmm, yeah."

Flavor: Pineapple
Impression & Comments: Like the tangerine bar, it's very fresh, with little pieces of real fruit. It is super flavorful, and super awesome.
The Verdict: Yes and yes. Maybe it's possible to melt it to make a cocktail….

Impression & Comments: It looks like a bomb pop, but doesn't have a super strong flavor. It's even a bit watery. The small white ribbon on the bottom and the layer under the pink part tastes like a cream soda Dum Dum.            The Verdict: Solid but unspectacular. Not something crave-able, but it'll do in a pinch.