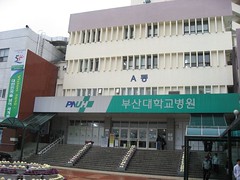 I suffered from chest pains three weeks ago, which was not particularly anything new, but the weakness in my arm and duration of the pain was – so I decided to go to hospital the next day to ensure the problem wasn’t anything serious. Cue the Korean hospital experience:

T+0 We enter the hospital unannounced
T+1 minute, we fill in my details on a form
T+2 My blood pressure is taken
T+3 I see the doctor
T+5 I’m sent for x-rays
T+6 I’m having the x-rays
T+8 I’m seeing the doctor again

I suffered from chest pains three weeks ago, which was not particularly anything new, but the weakness in my arm and duration of the pain was – so I decided to go to hospital the next day to ensure the problem wasn’t anything serious. Cue the Korean hospital experience:

T+0 We enter the hospital unannounced
T+1 minute, we fill in my details on a form
T+2 My blood pressure is taken
T+3 I see the doctor
T+5 I’m sent for x-rays
T+6 I’m having the x-rays
T+8 I’m seeing the doctor again
T+10 I’m referred to a heart specialist
T+12 We’re back out on the street

At twelve minutes from start to finish, it would all be very impressive, and fairly typical of the Korean health experience, if the hospital hadn’t been more focused on my lungs and admitted that, despite its size, it lacked the resources to conduct a more thorough heart investigation. Immediately seeing the heart specialist they’d referred me to felt like too much of an escalation, so I decided to try another hospital. I love the freedom of choice here.

The second hospital matched my expectations much more closely. Within fifteen minutes of walking in through the door, I’d seen a doctor, had an ECG plus breathing tube test, and had only been stopped from quickly moving on to a heart ultrasound by the onset of lunch-breaks, which along with potentially being shut at weekends and on holidays, are the one aspect of Korean private hospitals which can be rather disconcerting.

So the ECG was flagged as abnormal, my breathing envelope was too limited, and the heart ultrasound suggested I was suffering from Mitral Valve Prolapse. It didn’t appear to be an immediate cause for concern, but I was referred to a large and effectively Government-backed university hospital to see a professor, and I thought we might as well get it out of the way while we were out.

Pusan National University Hospital (aka ‘PNUH’) was much more like a British NHS building – a large maze of corridors with worn floors, fixtures and fittings, fading government-issue paint schemes, endless waiting areas, treatment rooms and mini reception desks around which sorry-looking huddled pockets of humanity could be found. While the private hospitals projected a certain ‘can-do’ attitude alongside their modern décor, a certain sense of hopelessness seemed to permeate the atmosphere of the state-backed institution.

It seemed that before I saw the professor, I would have to repeat all the diagnostic tests again, I believe on the grounds that the university hospital could only really verify its own results. Or you might use the word ‘trust’. I understood why, although I wasn’t particularly happy about repeating the x-rays; while the quantitative and qualitative difference between the Korean health system and the UK’s NHS has never ceased to amaze me, it’s not to say that every aspect of the Korean system is left unquestioned, and I’ve pondered the risks of potential over-diagnosis during my time here.

While I was stood at my second x-ray machine of the day, I noticed the display telling me that my full name was now ‘MA LEE KEUL’. We’d had a lot of problems trying to spell it out at the hospital’s main reception desk. My long Western name is a constant problem in Korea, my surname was gone and now ‘Ma-ri-geul’ was my full name, apparently.

Although my actual speed of progress through the system was still much faster than the NHS, it seemed I would have to return a week later for an analysis of the results and some more tests with the professor. So last Friday I returned to PNU Hospital, but this time there was more of a buzz in the air. Kim Yuna – a national heroine and feature of every other advert on TV – was skating for gold in Vancouver, and Korea was transfixed. Every TV and monitor seemed to be carrying an Olympic feed, and the huddles of humanity were now to be found gathered around images of this national event. 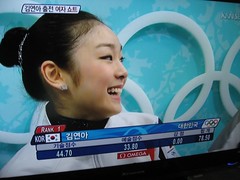 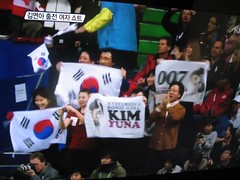 Typically my time with medical staff follows a well-worn pattern. I brief my wife beforehand, we both enter, she explains the problem, the doctor asks her follow-up questions, sometimes involving me via translation, and after much is said we leave and my wife gives me a very much shorter summary. Probably, that’s what all the information boils down to, but the experience is thus oft-rendered into an somewhat dissatisfying abstract, for which I only have myself in the shape of my lack of Korean fluency to blame.

My meeting with the professor took a different turn. After the initial introduction with my wife, the professor turned to me and asked how it would be if she spoke to me in English. That was fine with me though it’s not without risk – in my experience sometimes it’s better to have people say things in Korean so the full facts can be understood by my wife, rather than have them attempt to do the same in English and have my wife and I only receive a summary of what we might have done in the native tongue. I needn’t have worried though, the professor had worked in America and her English ability was very impressive. This meant, for the first time in Korea, that I was able to have a full conversation about a medical issue without feeling that I was losing out on the level of information I would receive in the UK. In fact, it was better than the UK, because the professor actually took the time to explain the various results to me in detail, which the NHS rarely feels motivated to do.

She suggested that I have a CT scan, but since the initial results weren’t indicating a problem, I wondered how far I wanted to go – I believed such scans carried an approximate 1-in-2000 risk of actually causing cancer (later, I read this Wall Street Journal article which suggests the figure for heart scans may be as high as approximately 1-in-600), and I’d already had a CT scan last year for back pain. I expressed my reservations and she smiled – she said she knew foreigners were often wary of such things. “Yes, we don’t like radiation very much” I replied somewhat unapologetically. I’d had to weigh up the odds and make a snap judgement. It’s fair to say I’ve probably had more than my fair share of medical problems in the last ten years, which have sometimes been investigated at great personal inconvenience and expense to little avail, although we have ruled out serious pathologies as a result. The NHS was never really interested in pursuing diagnosis beyond a certain point – whereas Korea’s enthusiasm for medical tests constantly threatens to turn my life into an episode of ‘House M.D.’, which incidentally – and perhaps not coincidentally – is quite popular here. I’m not a hypochondriac although I don’t believe in not properly investigating things – one of our friends here has metastasised cancer because she accepted her doctor’s initial assurance that she had nothing to worry about, proving that the health system in Korea doesn’t always work. For me, if serious problems can be ruled out after proper investigation I’m happy to live with what I’m left with if – on balance – it seems to represent a lower risk approach than invasive diagnostic procedures or regular radiation exposure.

On the whole, I’m sure that my attitude is not one the Korean medical profession really agrees with, and I regularly feel that I’m slipping into the role of being a strange or awkward foreigner when I express my unwillingness to follow advice or even turn up at a hospital until I’ve suffered minor problems for an extended period. I suspect that most Koreans display much more reverence towards their doctors, and perhaps we’ve lost our sense of innocence and trust in the West. But then, the rapidly growing anti-science, anti-intellectual and anti-fact section of American society demonstrates the downside of letting people with limited intelligence and no expertise or understanding in certain areas influence important decisions, and I worry that by Korean standards, I might seem like one of those people too. My degree is in Computer Science, and the few years I spent working for a medical devices company is neither here nor there. The upshot of this is that I second guess my doctors against what I read in Wikipedia, a fact that will possibly always prevent me from seamlessly integrating into this aspect of Korean society no matter how fluent my language abilities eventually become. The professor had strongly implied that whatever tests I’d had done at the private hospitals, the tests I would undergo at the university hospital would be the ones with the correct results – and as far as I believe anything I believed that. I’m not completely distrusting.

In the absence of a CT scan, the professor instead suggested I do a treadmill test, which due to its unscheduled nature, later saw me vigorously sprinting along on the machine in my jeans rather than the shorts which would have been a better option. I was told to stop if I experienced any pain, though my natural bloody-mindedness, coupled with the possibly belatedly important need to not fall into the stereotype of being a weak foreigner in front of the Koreans, meant that only a near-death experience was going to stop me.

After the treadmill I had an ultrasound. Kim Yuna was due to start her routine within twenty minutes and I was concerned the staff would miss the event, but fortunately we finished in time, and the professor invited us to watch the performance with her colleagues. It felt like the Korean equivalent of one of those moments you tell your children about – where were you when Kennedy was shot, where were you when Kim Yuna took the gold? I’m sure it will pass. The hospital seemed to come to a halt – later I read that volume on the stock exchange in Seoul dipped significantly as traders turned their attention away from their trading screens. The atmosphere was tense – quite possibly all across the country – and I felt that Korea had wound itself up to such a point that even I couldn’t bear the idea of her making a mistake. So Kim Yuna’s performance became my last heart test of the day.

Three weeks ago I visited three hospitals and had a day seemingly full of seeing doctors and having different tests, but the total bill only came to £35 ($53/60,000 won). The total PNU Hospital cost about £170 ($255/290,000 won), which puts the differences into perspective. But with luck, I should be able to reclaim about 90% of that through my medical insurance.

As for me, my problems are intermittent and difficult to diagnose, and I walked away from the hospital with no evidence of anything clinically significant in my results. But it’s altered my perspective slightly on the small private hospitals I’ve previously trustingly frequented, now that I’ve seen how things are done in the big institutions.