A few days later a package arrived from California. Not just a package, but a veritable bonanza of herbal goodness. David mailed us some Thai basil and cilantro seeds, star anise, cinnamon bark, cloves and a mystery spice package for making Vietnamese pho. Along with the package came photocopied and handwritten pointers for making Vietnamese soup and beef balls. 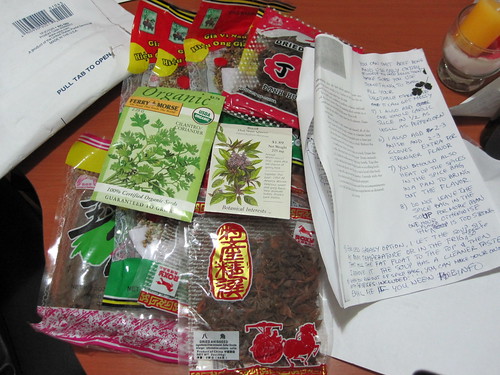 David is a person who I know almost nothing about. With no Google profile to forensically analyse, I was limited to ruminating over his email address, from which I surmised that he is a fly-fishing enthusiast. Fly fishing being another thing that I know almost nothing about.
What can I say, but a heartfelt thanks and greatly appreciated, David.
To mark this event with a meme, whenever his beef ball recipe is used in the Farrand household, we’ll always refer to them as David Hwang’s Beef Balls. With such an auspicious name, I’m sure this tale will inevitably be told at numerous potlucks in the future. 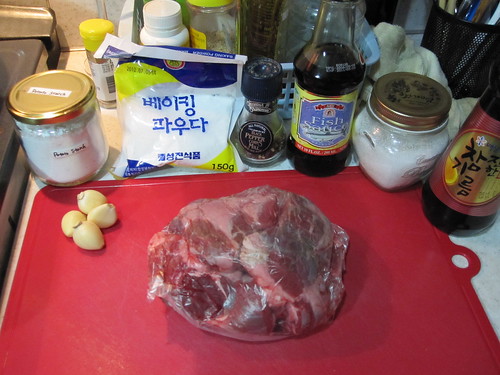 Here’s how to make David Hwang’s Beef Balls. You can get all of these ingredients in Korea pretty easily.
You need:
1/4 cup of fish sauce
1 and a half tablespoons of potato starch
1 teaspoon of baking soda
1 teaspoon of sugar
1/4 teaspoon of freshly ground pepper
600 grams of trimmed boneless beef hind shank
4 garlic cloves, crushed
1 teaspoon of sesame oil
Vegetable oil for shaping the meat balls
Food processor
Intelligent method of steaming 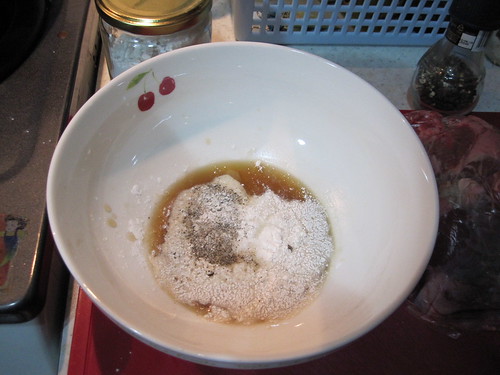 Mix the fish sauce, potato starch, baking soda, sugar and black pepper in a bowl. Slice the meat into thin strips (2mm or so) and add the meat to the bowl. 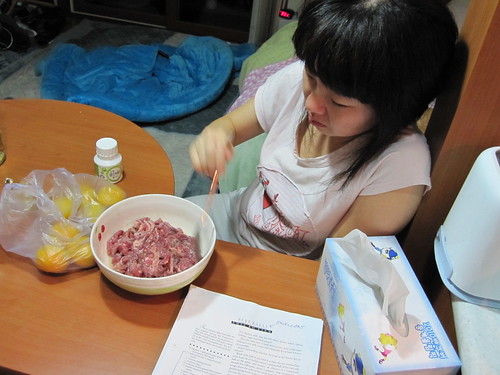 Then, if you have a wife handy, politely ask her to mix the condiments while you clean up your mess. If you don’t have a wife, you can call upon a friend or family member with reasonable stirring skills as an adequate substitute. Remember to compliment the stirrer on their technique, to boost their self-esteem.
Cover and refrigerate for at least 4 hours or overnight. 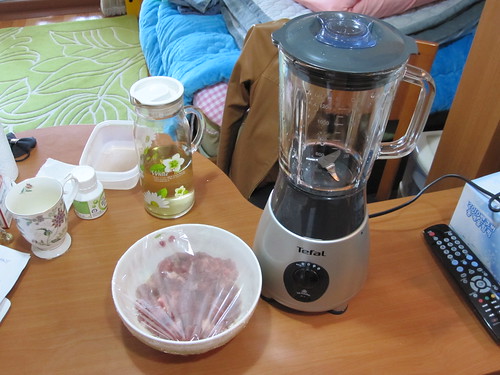 Transfer the meat to the freezer 30 minutes before adding it to the food processor. We didn’t actually have a food processor before. One remarkable stroke of luck is that Heather’s older sister sent us one in the mail, as a pregnancy gift, approximately four days before we made this recipe. If luck is a limited commodity, I’m sure we’ve received more than our fair share already.
Blend up the meat in the processor for a good five minutes. Only add small amounts at a time or it will become overloaded. Transfer the paste to a bowl and use oiled hands to craft them into smooth rounded balls. 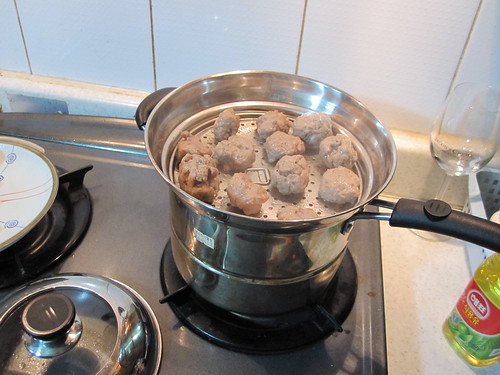 Then you steam the beef balls for around 5 minutes. When this is done, you can eat them immediately and store the remainder in the freezer for later. This recipe makes around 60 of the little critters.
It is a most excellent idea to refer to them as David Hwang’s Beef Balls when making them for yourself at home. That allows you to explain how they got their name when people ask.

If there’s one thing I enjoy, it’s telling stories while I cook. 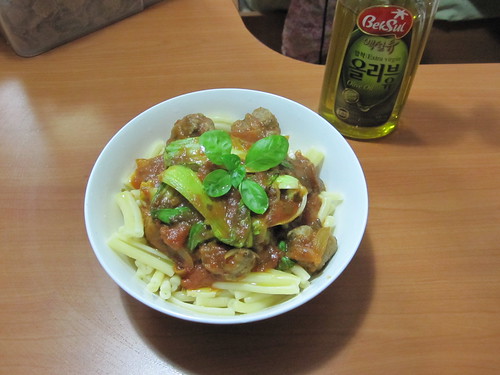 I haven’t gotten around to making his pho recipe yet, which takes a fair amount of time. In the photo above is a pasta meatball recipe I made instead. You can also eat the meatballs by themselves with Sriracha chili sauce. They taste excellent.
As I mentioned to David in my reply package (on its way David!), it’s not often these days that people are lucky enough to receive the generousity of strangers. We’d like to thank him again for his kindness. Mailing a stranger a package is a big deal, and I shall use the spices sparingly.
And David Hwang’s delicious Beef Balls to you all.