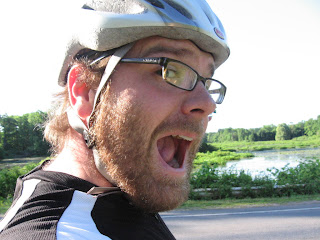 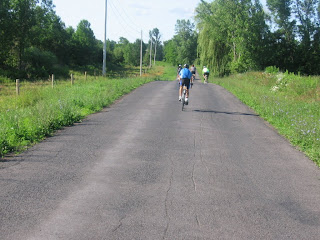 Despite not having a cyclecomputer (which actually merited another rider rolling his eyes at me), I was able to finish the first day of riding with Anchor House today without needing the SAG (support and gear) wagon to come and scrape me off the side of the road.

I must admit to not training as much as I should have. OK, I didn’t train at all, unless you count the sporadic ride to the bank or thr ough Veterans Park training. I also smoked a bunch of
cigarettes with Erin three days ago. Bad influence. Yet, despite these impediments, here I am, alive, though I wonder if I will even be able to sit on my bike seat in the morning, let alone ride another 73 miles to Ithaca, NY.

Today was a 75-mile route, from Oswego, NY, along Lake Ontario, to Geneva, NY. Someone along the way said that its actually only 25 miles from one to the other, which means we rode about 50 miles out of our way. When I got lost about 53 miles into the ride and added another five miles to my total, I wished they had just let us take the bus.

Perhaps a cyclecomputer isn’t such a bad idea, after all (he says, rolling his eyes).

I have met some good people so far and have eaten some decent meals. You see, despite riding about 500 miles in a week, no one really loses any weight on this thing. Because when we’re done for the day, the last anyone wants to do is watch calories. Though I did get the baked chicken at dinner tonight instead of the deep-fried, sausage-infused “Eggplant Luigi” tonight, which looked ridiculously good. But, I did order a tiramasu. 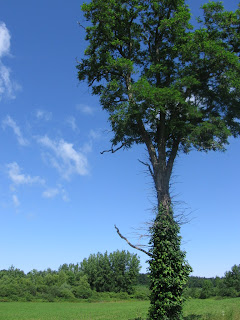