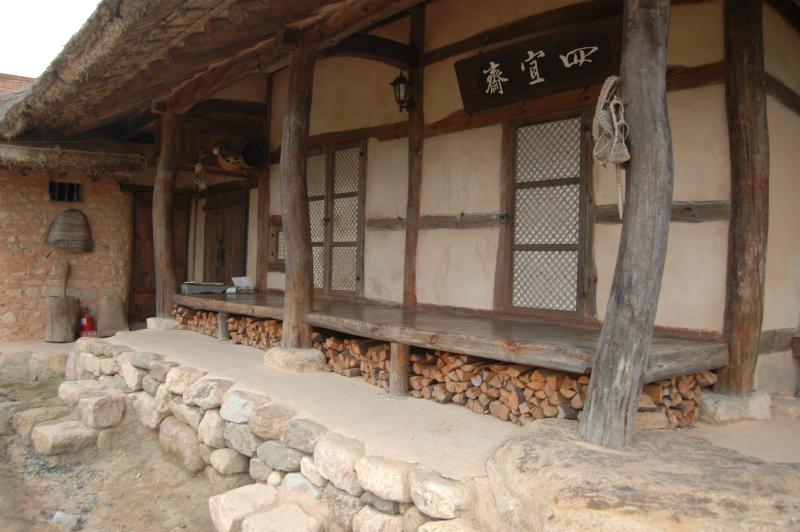 While in town for the Gangjin Celadon Festival, the Lady in Red and I decided to meander our way through the tiny county in Jeollanam-do. It’s technically an 읍 (eup, or rural county), and with a mere 41,000 people living there it’s far from densely populated. As usual, we started from the bus terminal and peeked at the tourist information / map to help us decide where to go.

While in town for the Gangjin Celadon Festival, the Lady in Red and I decided to meander our way through the tiny county in Jeollanam-do. It’s technically an 읍 (eup, or rural county), and with a mere 41,000 people living there it’s far from densely populated. As usual, we started from the bus terminal and peeked at the tourist information / map to help us decide where to go.

It turns out there is a quasi-trail linking a number of historical sites together. While they’re not the sexiest or most exciting sites in the world, it’s a good chance to get off the beaten path.

The picture above is of 사의재 (Sauijae), the first house of Dasan, or Jung Yak-yong, while he lived in exile. Born in 1762 in present day Namyangju (Gyeonggi-do), he passed the governments’ civil service exam in 1783 with the highest score. After passing a higher-level test in 1789, he worked for King Jungjo for 12 years. After the king’s death, a number of political parties backing Confucian and Buddhist beliefs banished Jung for his Silsagusi idealogy, which supported of introducing western culture to Korea. A plaque (in Korean) explains how he moved around to three other places within present-day Gangjin. 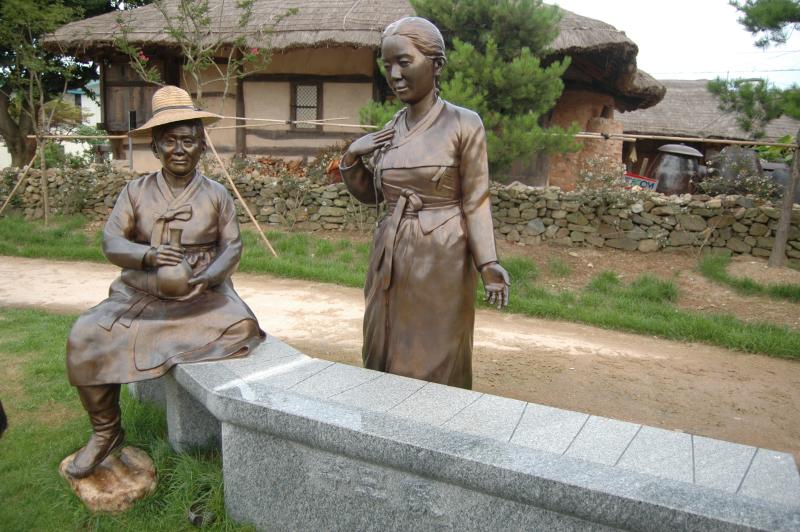 A bronze statue of Dasan and his wife.

From here we saw a pavilion and walked up to it. That led us to our next place we stopped: a brand-spanking-new war memorial: 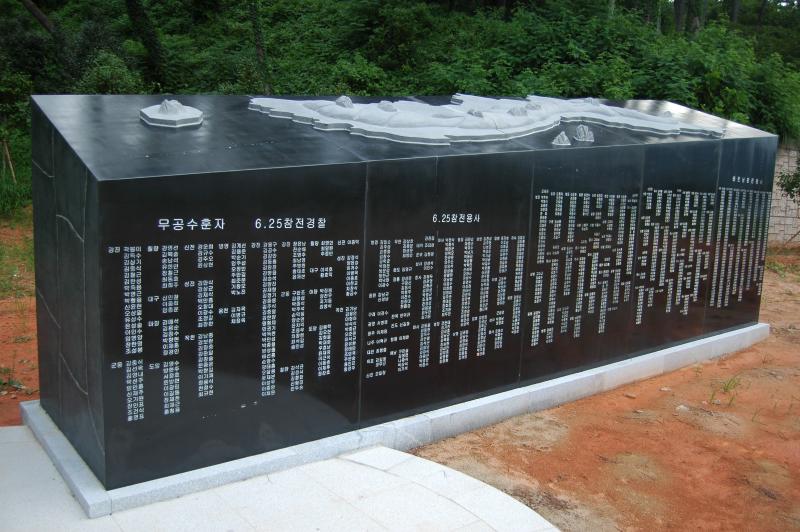 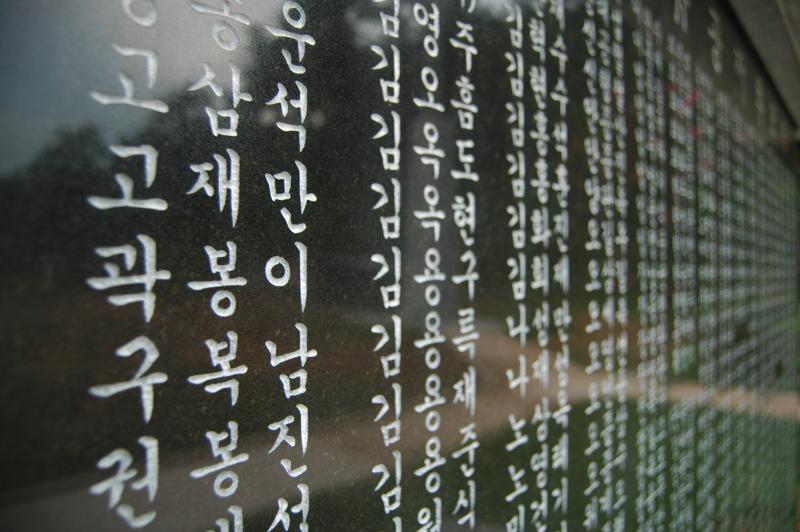 Just a few of the people from this area killed during the Korean War (the 6.25 you see). 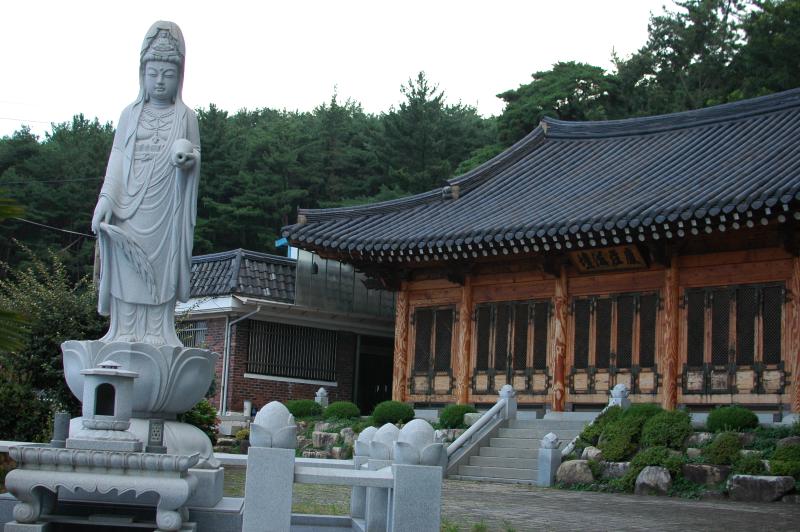 It was at this point that the signs seemed a bit confusing. They’re new, but it’s hard to match up the right place with the right name. I’m pretty sure this was 금사당 (Geum-sa-dang), or a mausoleum. The only other clues are the Chinese characters that name the buildings, and I have even less ability to read them. 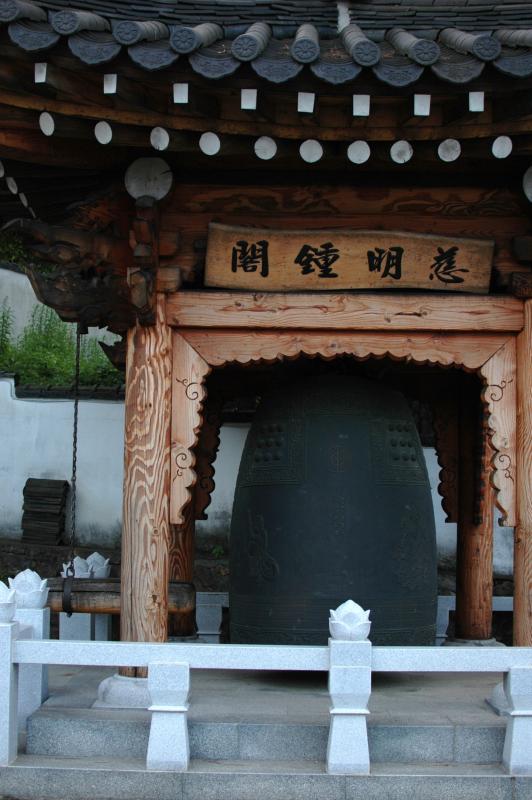 Just to show you how few tourists this place gets, the entry to the bell was completely unguarded; not even a rope prevented anyone from ringing it to sound for miles around. 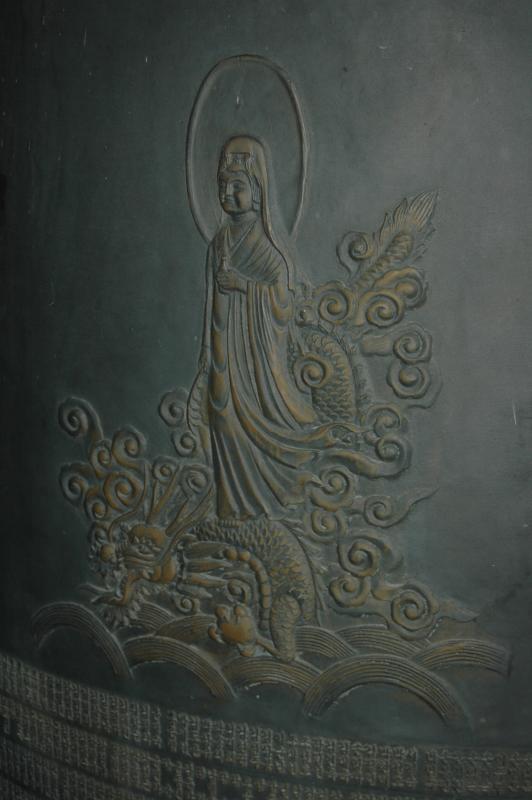 I’m always impressed by the detail in these huge and heavy bells. 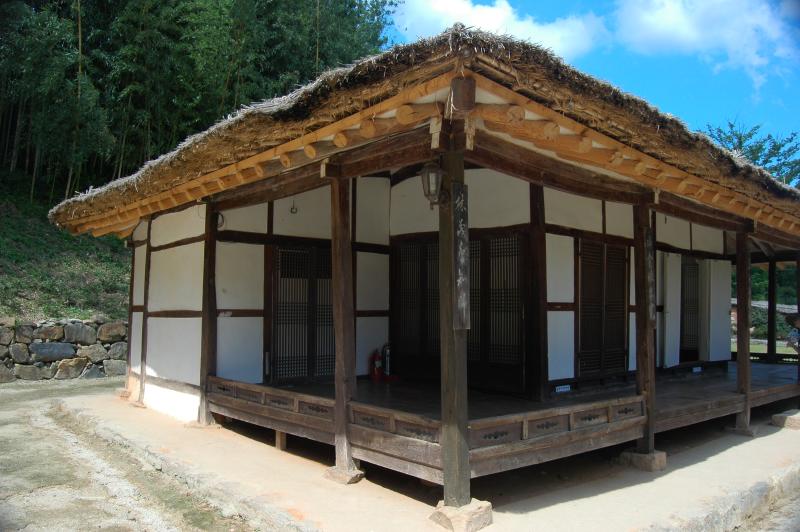 The last stop was the birthplace of ‘Yeongrang’, (영랑생가) or Kim Yun-sik. Born in 1903, he participated in independence movements in 1919 as a high-schooler. After being caught carrying an announcement of independence, he spent 6 months in jail. That didn’t seem to stop him, as he became a leader of the independent movement for the Gangjin area after 1945. He started a literary magazine called Cheongu, though he was better known for his writings in Poem and Literature. Most of his poems published in the 1930’s, many of which were focused on nature, animals, and so on. After being wounded during the Korean civil war, he passed away in 1950. The house was restored in 1992 by some of the poet’s descendants, and is a reminder that traditional Korean houses don’t always or necessarily date back hundreds of years.

If you’re coming to the area and have some time to kill, these sights are all within a short distance of each other and the bus terminal. Make this a stop along the way towards somewhere else – there’s not much else to check out in this tiny town.

Directions to Gangjin: Buses headed directly to Gangjin leave from Seoul six times a day, and take about 4 1/2 hours to arrive. Alternatively, take a train from Yongsan station to Gwangju (9 times a day) and catch a frequent intercity bus to Gangjin from there. Once in Gangjin, turn left out of the bus terminal and head up the hill. At the T 400 meters away, turn right and look for the brown sign pointing left to Yeongrang’s birthplace.