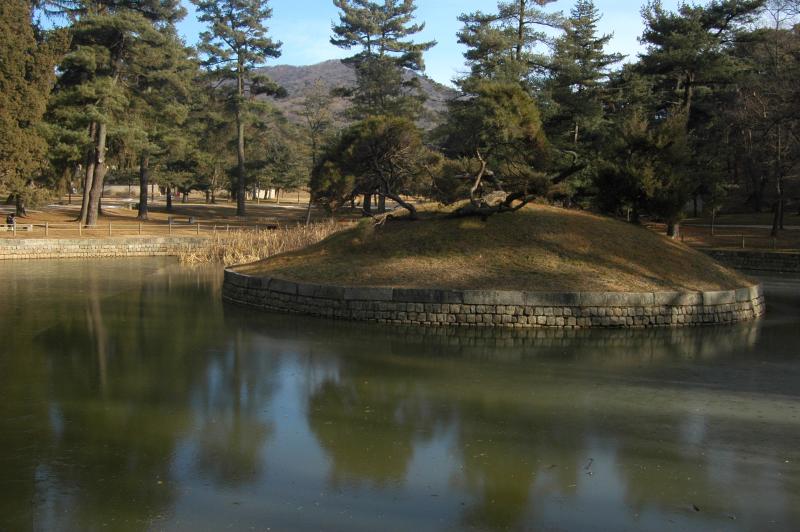 As with many of the other Joseon Dynasty tombs, Hongneung and Yureung are somewhat off the beaten path. Although they’re relatively close to present-day Seoul, they often require a bit of a bus ride to reach. Thankfully, this one’s pretty easy to get to – and a few bonuses while there make the site that much more interesting.

Chronologically speaking, Hongneung and Yureung represent the last two tombs of the Joseon Dynasty. Even as the Joseon Dynasty is sometimes thought of as ancient history, it’s worth noting that the last person buried here was relatively recent – Empress Sunjeong in 1966.

As with many of the other Joseon Dynasty tombs, Hongneung and Yureung are somewhat off the beaten path. Although they’re relatively close to present-day Seoul, they often require a bit of a bus ride to reach. Thankfully, this one’s pretty easy to get to – and a few bonuses while there make the site that much more interesting.

Chronologically speaking, Hongneung and Yureung represent the last two tombs of the Joseon Dynasty. Even as the Joseon Dynasty is sometimes thought of as ancient history, it’s worth noting that the last person buried here was relatively recent – Empress Sunjeong in 1966.

The pond (above) is the first real sign that things are different here. Featuring a circular pond and a round island in the center, it’s a break from the older Eastern thought. It’s just one element of an altogether different place. 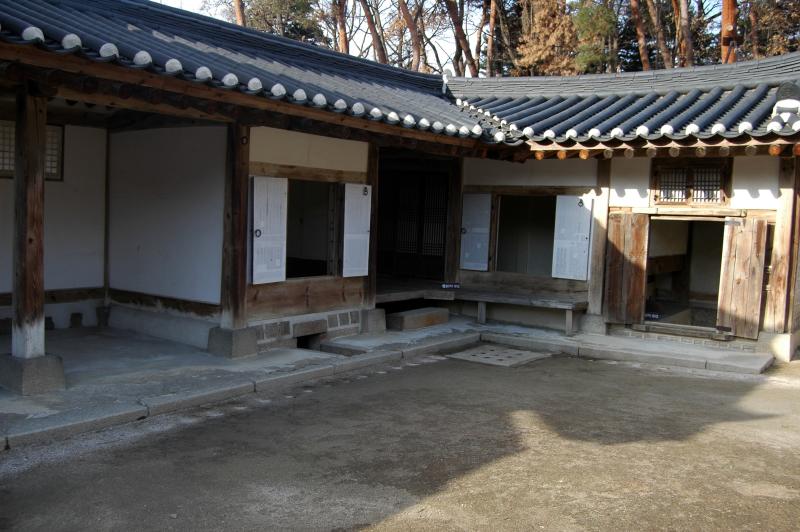 A look inside the tomb keeper’s house, or a 재실 (jae-sil) – much larger than others of its kind.

These two tombs represent a definite break from other Joseon Dynasty tombs – and for good reason. In 1897, King Gojong declared Korea to be the Great Han Empire – effectively breaking off their tributary ties with China and making him Emperor Gojong. In making his empire, the organization of tombs and where the stone statues went changed significantly. It was also a short-lived empire – after the Eulsa Treaty was signed in 1905, the Japanese forced him to abdicate in 1907. The Japanese then put his son Emperor Sunjong in his place. Sunjong sat in the big chair for three years before the Japanese annexed Korea in 1910. 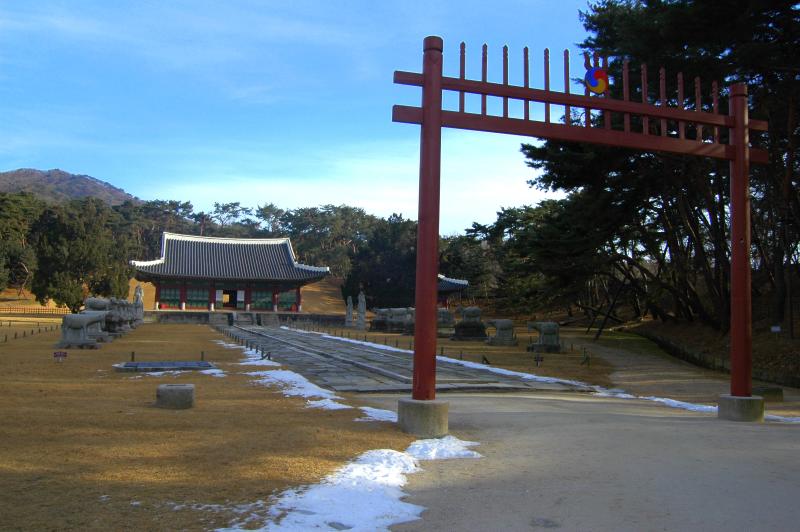 Although the Great Han Empire was short-lived, the tombs are awesome. In the foreground is the same 홍살문 (hong-sal-mun, or the red spiked gate), while the background features the 침전 (chim-jeon, which translates to royal bedchamber hall). What’s different here are those stone statues between A and B. Put that thought away for right now – we’ll look at them a little closer in a minute. 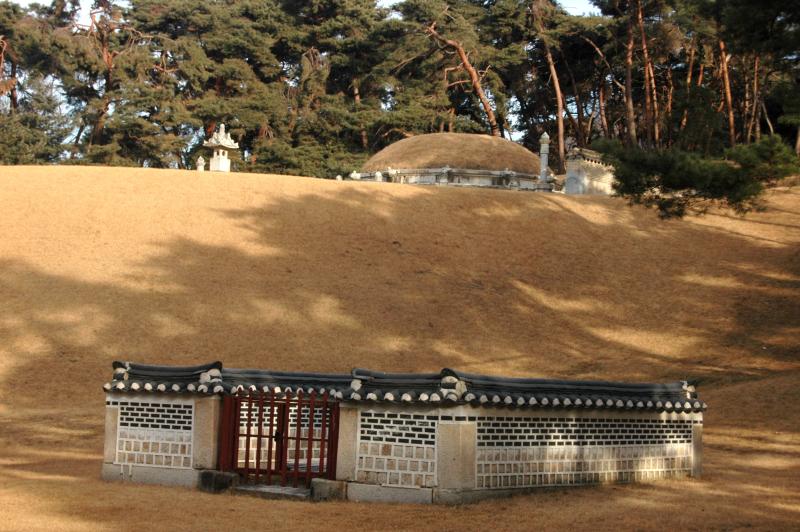 The tomb itself is up on the hill, while the royal well (어정, or eo-jeong) is in the foreground. Note the relative lack of statues – on earlier tombs they’re up here. 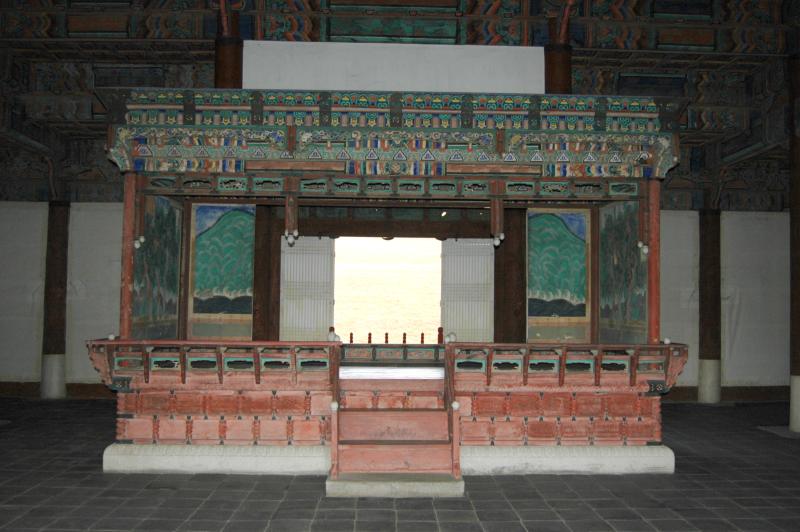 The inside of the 침전 (chim-jeon) – not unlike some of the palaces. 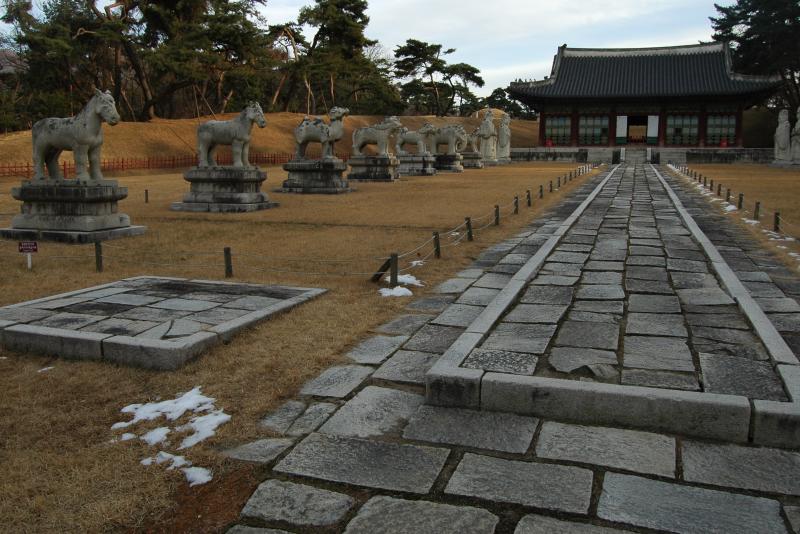 Moving on to Yureung – the only Joseon Dynasty tomb that holds three people under one mound. Emperor Sunjong served as the last Emperor of the Great Han Empire, while Empress Sunmyeong became Princess Imperial in 1897 and passed on in 1904. Empress Sunjeong, who lived through the Japanese occupation and the Korean war, became the last person to be buried at a royal Joseon Dynasty tomb in 1966.

The stone statues (in order) are two horses, a camel, a mythical haetae (like a lion with a horn in the center of its head), a lion, an elephant, and a girin (a mythical animal symbolizing capable and talented people). Their counterpart is directly across from them on the other side of the path.

It’s here where you might be walking around, appreciating the nice scenery, and mentally making plans for whatever may come next. These are, after all, the two tombs shown in the map…

Shown in a small box of the brochure’s map are two more tombs – of princes! – but no clear indication of how to get there. After asking at the front gate, we learned the open-to-everyone path. Instead of heading into the walled area, go around it. It’s not a short walk, and from most indications we were the only tourists around at the time. The locals use it as a walking / jogging / dog-walking trail, though there are the sights around: 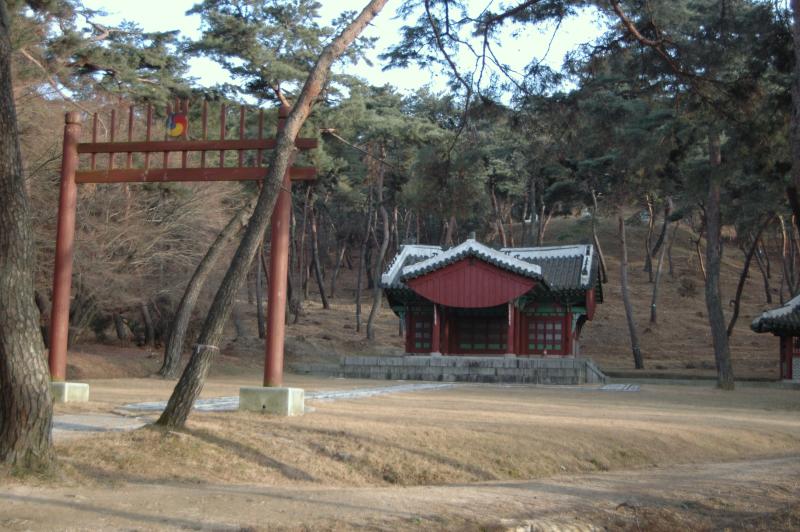 Presenting Yeongwon – the tomb of Crown Prince Uimin and Princess Masako (AKA Princess Bangja), Joseon’s last crown prince and princess. Born in 1897 to Emperor Gojong and Lady Eom, Uimin was taken to Japan at 11 years old, given a Japanese education, married Princess Masako / Bangja of the Japanese royal family, and became a general in the Japanese military. There’s no indication on the tourist signs or Wikipedia that he ever fought Koreans on behalf of the Japanese, but when Korea became an independent country following World War II, Uimin was refused entry. Then-president Rhee Syngman feared Uimin’s popularity, even though all royal titles were abolished at the end of World War II. It wasn’t until 1963 that he returned to Korea, and remained bedridden at his home in Changdeokgung (Changdeok Palace in Seoul) until his death in 1970.

His Japanese wife, who traveled with him back to Korea, is a fascinating story. After Uimin died, Princess Masako / Bangja devoted herself to educating people with mentally and physical handicaps. She founded two schools to help people with handicaps adapt to society, and was adored as the ‘mother of the handicapped in Korea’. After her death in 1989, her Japanese family has continued to support the charities she started. 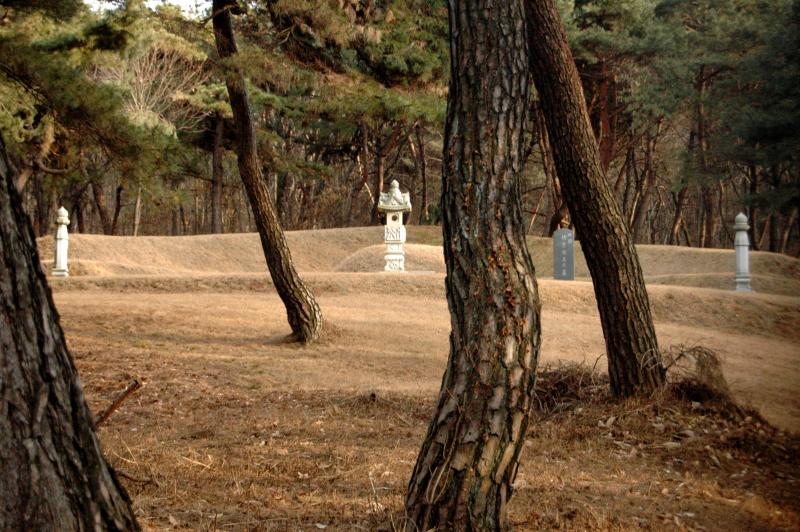 An even more recent epilogue to this story is the tomb of Prince Yi Gu. King Gojong’s grandson and the son of Crown Prince Uimin and Princess Masako / Bangja was born in Tokyo in 1931. Living a life quite unlike his royal predecessors, he studied in the USA and worked as an architect in New York. In 1963, he returned to Korea and lectured on Korean architecture while living at Cheongdeokgung with his parents. After his airline business went bankrupt and he was forced to divorce his wife by his parents, he eventually died of a heart attack in 2005. It’s here where it seems silly to mention his posthumous title in this day and age, but “Prince Imperial Hoeun of Korea” is what was decided.

The two royal tombs are worth seeing on their own, but the story of the more recent princes and princess makes it almost irresistible. If you’re up for a day trip out of Seoul, this is a great candidate for something not high on most tourists’ lists.

Ratings (out of 5 taeguks): How do I rate destinations?
Ease to arrive:

If taking a bus, get off ONE STOP AFTER Geumgok station, 홍유능앞 (Hong-yu-neung-ap). Turn right at the intersection by the bus stop, walk 100 meters, and look to the left for the parking lot. Walk through the parking lot to the entrance; 1,000 won admission, open 6am – 6:30pm (March – October) or 6:30am – 5:30pm (November – February). Ticketing stops an hour earlier either way.

For the tombs of Prince Uimin (called Yeongchin on the map) and Prince Yi Gu, walk AROUND the walled-in tombs and follow the trail. They’re easy enough to spot through the trees, although fences prevented us from getting a closer look during my visit. Free admission, hours not specified, though there were few lights along the trail.