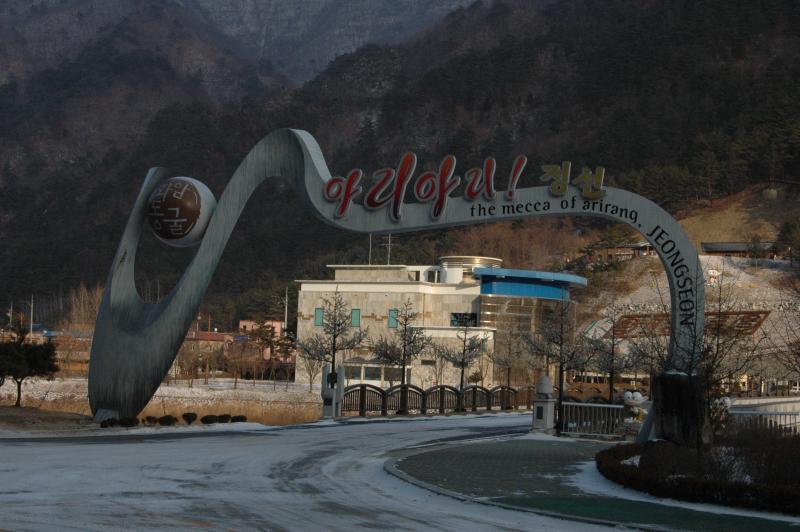 Author’s note: A version of this article appeared in February 2010’s Groove Magazine.

To say Hwaam Cave (화암동굴) is out of the way is an understatement. While few natural subterranean structures are located near subway stations or major bus terminals, this one seemed seriously out of the way. Once we arrived and got to appreciate the area, however, the trip was well worth the time.

Buy an admission ticket, then decide whether you want to ride the monorail to the entrance of the cave (2,000 won) or walk 700 meters uphill:

Author’s note: A version of this article appeared in February 2010’s Groove Magazine.

To say Hwaam Cave (화암동굴) is out of the way is an understatement. While few natural subterranean structures are located near subway stations or major bus terminals, this one seemed seriously out of the way. Once we arrived and got to appreciate the area, however, the trip was well worth the time.

Buy an admission ticket, then decide whether you want to ride the monorail to the entrance of the cave (2,000 won) or walk 700 meters uphill: 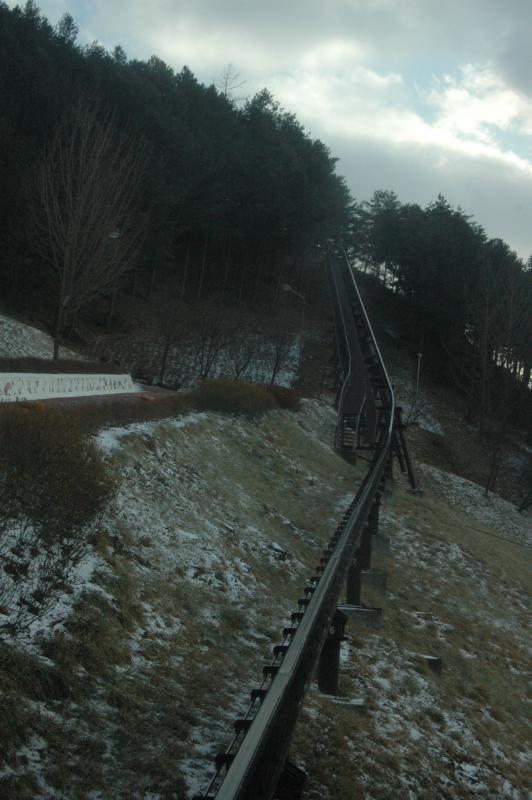 If you’re feeling a little worn out from your bus ride to the cave, take the monorail and get to the good part – the hike is uphill and not especially interesting.

Not pictured is a sign just outside the entrance warns you to use the bathroom nearby – the last one for 1,803 meters or an hour and a half. Apparently, nature doesn’t provide any while in the cave, and no indoor plumbing exists once inside. 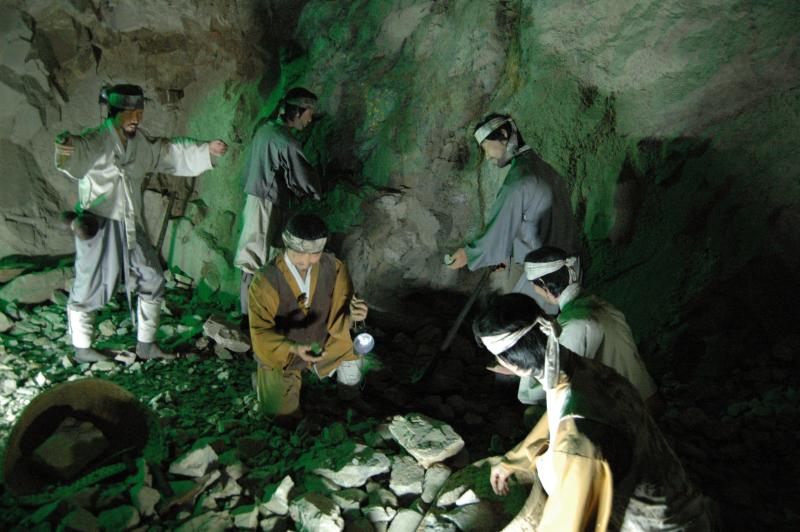 Once inside the cave, you’ll find several sections to walk through. The first one, about the cave’s history, uses several animatronic displays show people working in the caves. Hwaam Cave used to be a gold mine that was commercially operated from 1922 to 1945. It was the nation’s fifth-largest goldmine at one point; after stalactites were discovered, it eventually became a tourist destination. Quite a few original tools and equipment are set up, along with an old-school rock drill you can try out – a great photo opportunity. 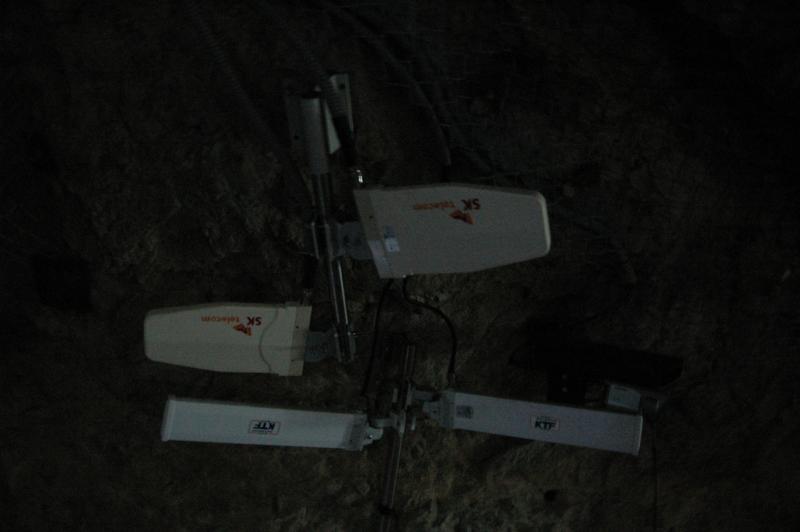 No matter where you go in Korea, you’ll always have a cell phone that works – even in a cave in the middle of nowhere. 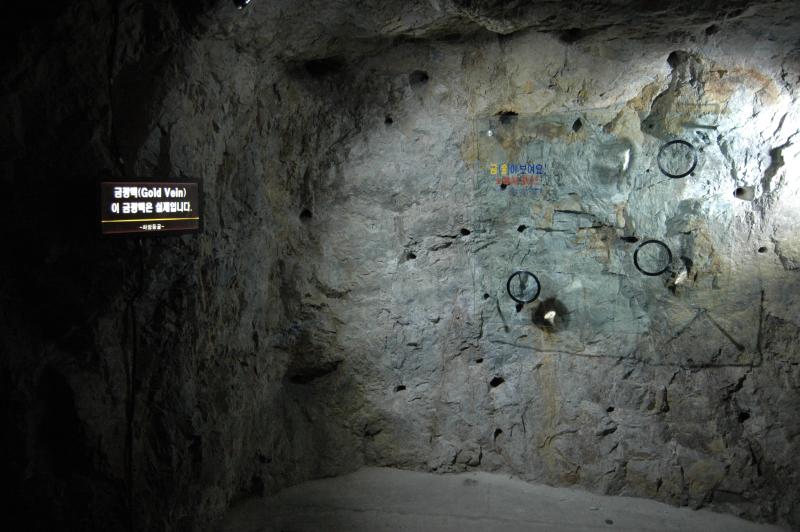 Some gold veins are still visible, and can be seen with the help of magnifying glasses. While no one will be scraping gold flecks out from behind the protective glass, it is a little surprising that there’s still visible gold left.

The next section will simply be known as ‘The Stairs’: 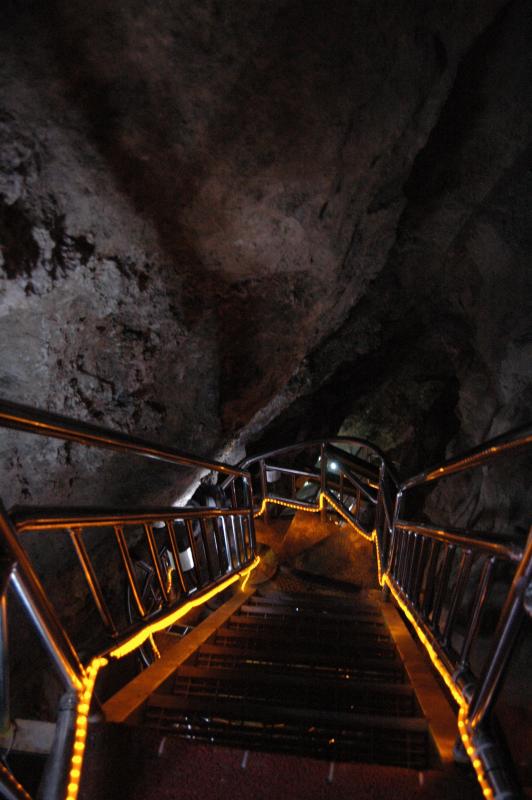 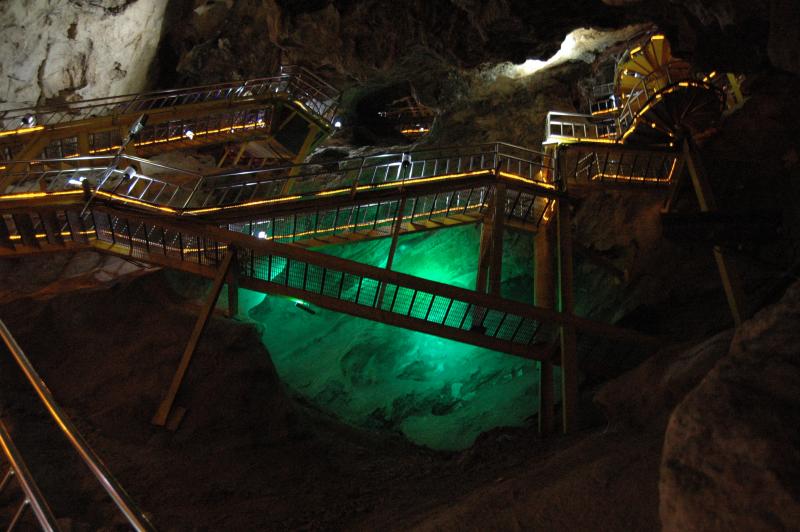 To clarify the perspective, you’re looking almost straight up. There are two staircases at the top, both leading down and to the left, then going off-picture and reappearing in the lower-left-hand corner. Keep your eyes for formations that look like fire, dinosaurs, and turtles. 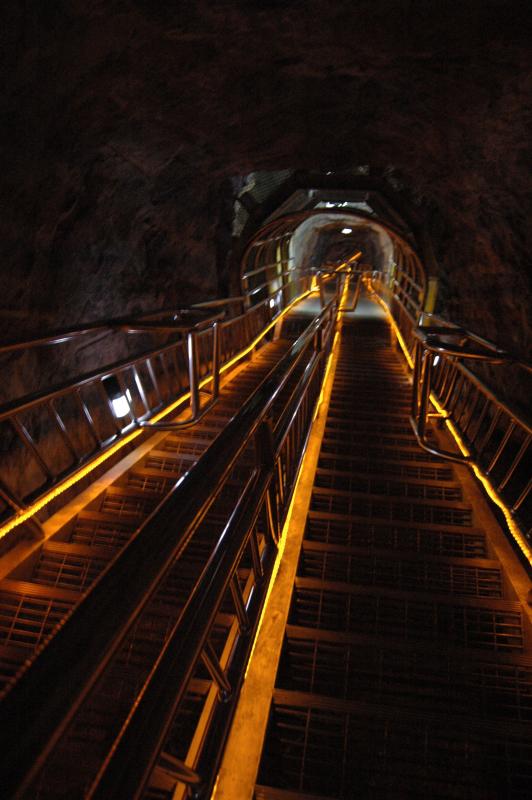 Down a longer set of stairs – some odd barriers are designed to keep you from falling down the entire 200 meter or so run. The views from these stairs are spacious, but not especially striking.

The next section is geared towards any younger travelers with you: 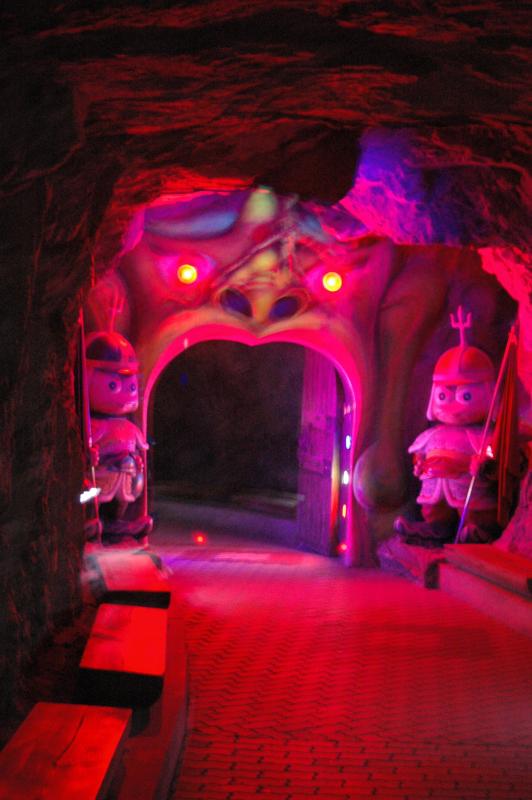 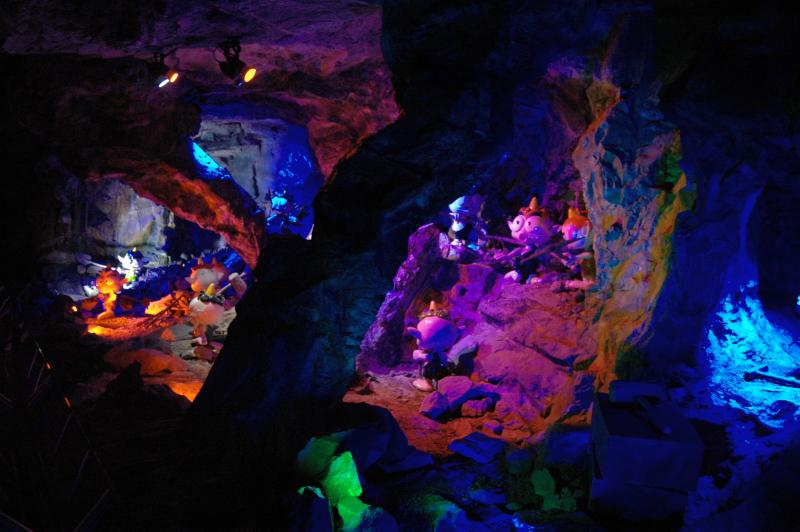 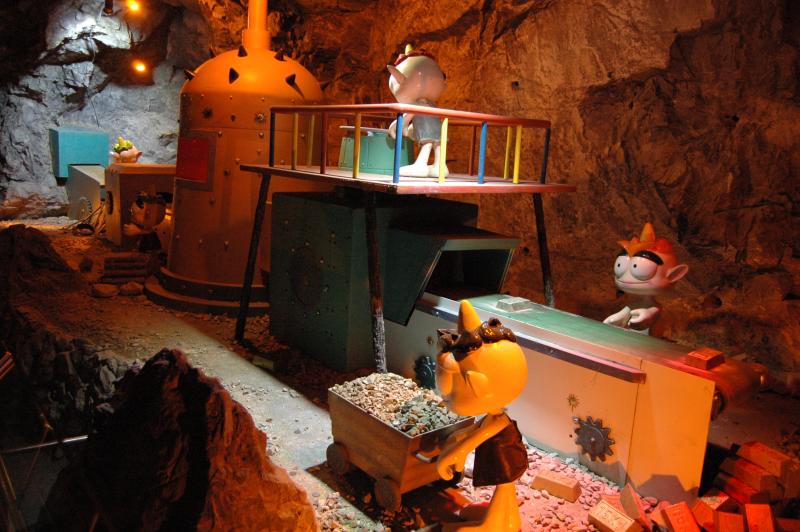 Because every cave has tiny little goblins mining for gold, right? Some fantasy cartoon characters more suited for a younger audience are shown ‘digging’ and ‘mining’. 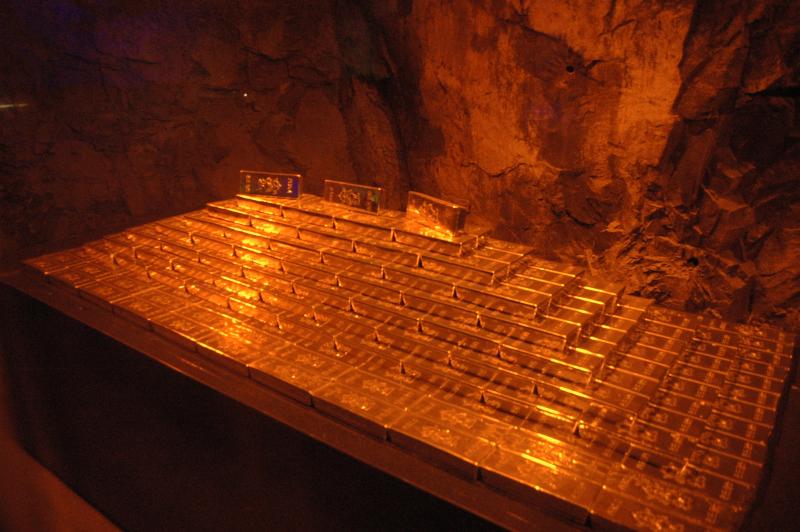 The next section features more about gold – and one exhibit shows quite a bit of the stuff (this can’t be real… can it?) 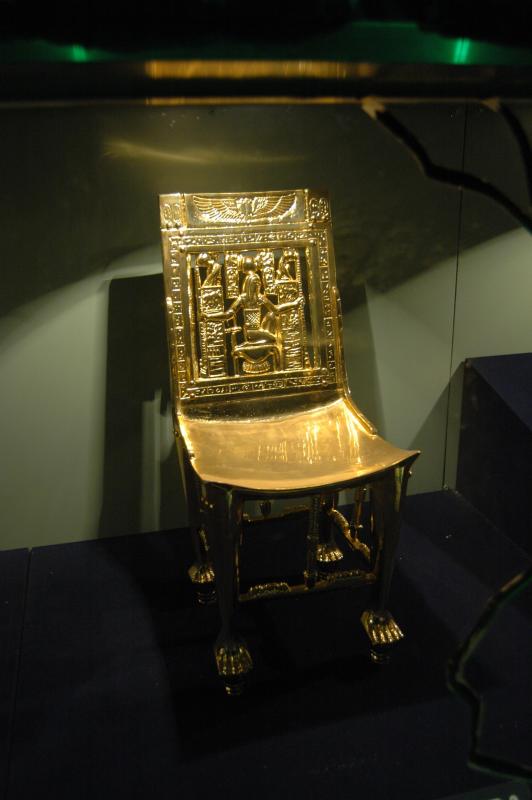 This is certainly real – a golden chair dating back to circa 1361 B.C. Egypt. Gorgeous.

The final section – and the highlight of the cave – the caves’ stalactites and stalagmites, wisely displayed with just enough light to enjoy them without losing your night vision. At 2,800 square meters large, it’s a chance to see many different characteristics within one relatively small area, preserved and mostly kept far enough away from curious hands. 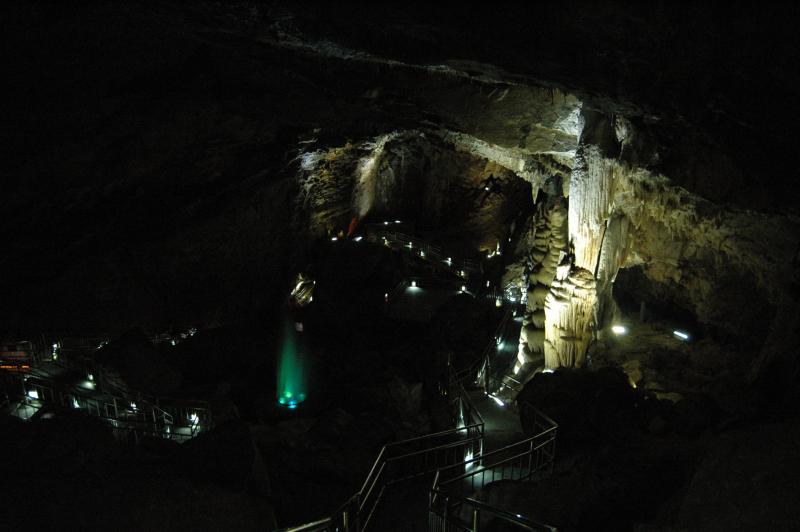 The green flame in the middle is actually a fountain that sports a light shifting through the color spectrum. Elsewhere, the stairs are adequately lit with lights that smartly point down to help you keep your night vision. 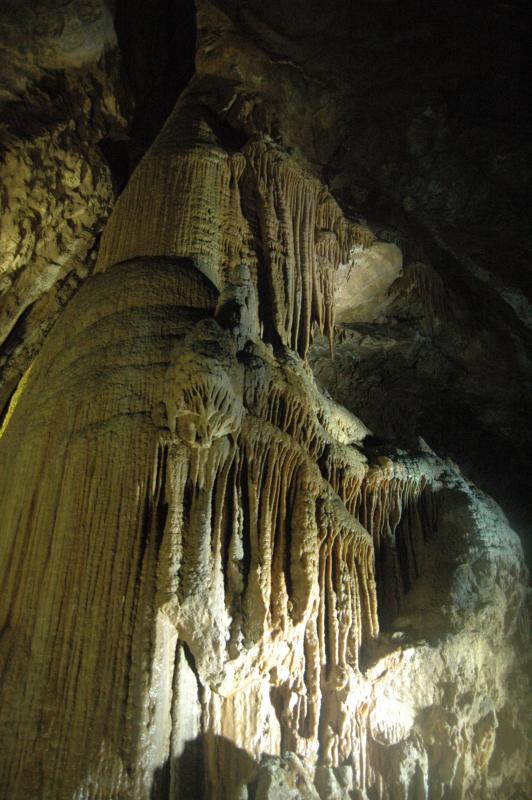 Many of these stalactites and stalagmites are still growing – the supposed rate of growth being 1 centimeter per 100 years, or about 4 inches per millennium. 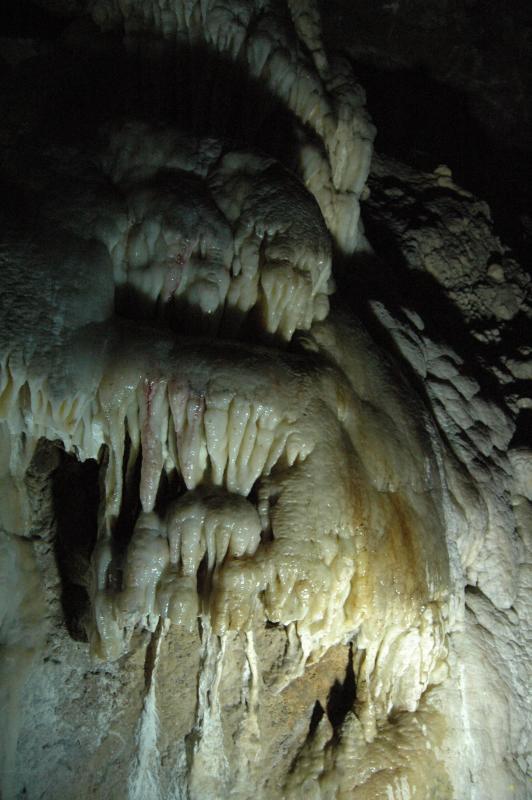 Anyone else see a mouth in this picture? 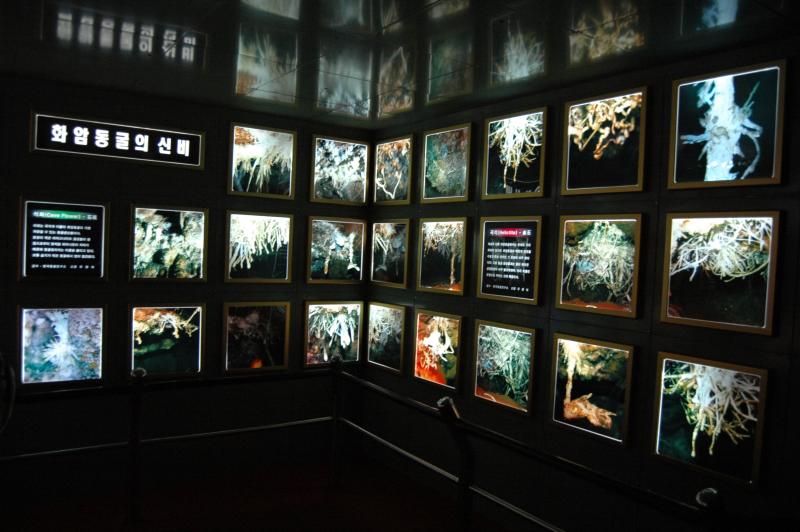 A photo gallery built within the larger cave, but with a fake wall to make this room feel smaller.

Although few explanations are in English, the size and beauty of Hwaam Cave will make you forget to look. Take at least an hour and a half to enjoy the sights; two hours if you have kids with you or are taking lots of pictures.

Directions to Hwaam Cave: Take a bus to Jeongseon – from Seoul’s Gangbyeon bus terminal (Gangbyeon subway station, line 2), 9 buses make the 3 1/2 hour trip every day. Once in Jeongseon, a local non-numbered bus travels from the terminal and stops in front of Hwaam Cave (look back at the first picture for the entrance to expect). That bus ride should take about 25-30 minutes and take you down a windy mountain road before arriving. Admission is 5,000 won, while the monorail costs another 2,000 won.