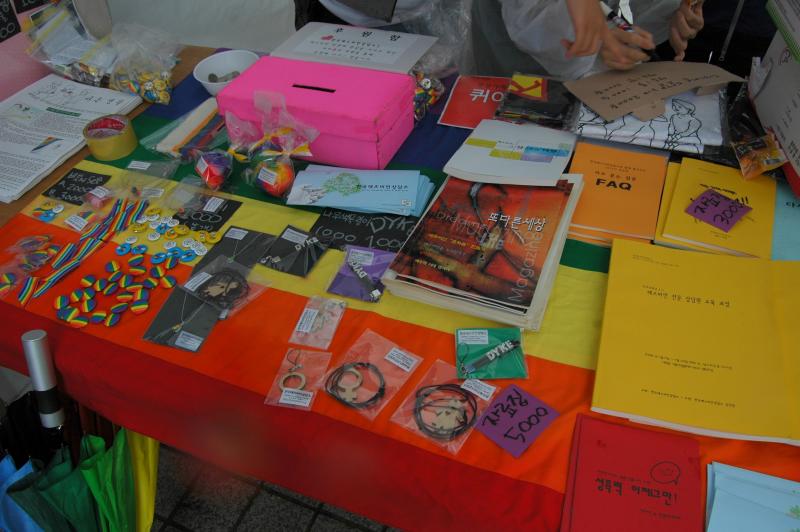 Author’s note: In order to take photos at this event, I was required to sign a pledge promising to keep people anonymous. In compliance with that pledge, I have blurred out faces or selected pictures that did not show people’s faces – homosexuality in South Korea still carries a harsh stigma, and I will not intentionally ‘out’ someone on this blog.

Author’s note: In order to take photos at this event, I was required to sign a pledge promising to keep people anonymous. In compliance with that pledge, I have blurred out faces or selected pictures that did not show people’s faces – homosexuality in South Korea still carries a harsh stigma, and I will not intentionally ‘out’ someone on this blog.

The 11th Korea Queer Culture Festival was an excellent chance to socialize and join forces with the GLBT population in Korea. While not only for the GLBT community, the event attempted to give some mainstream attention to an otherwise fringe minority. To that end, a number of organizations came together to promote their mutual interests. 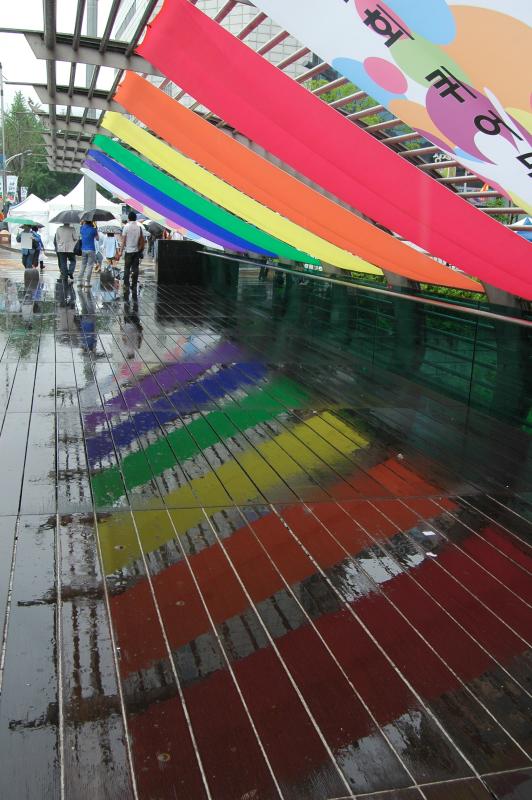 Held in the same location as last year’s event – along Cheonggyecheon stream in downtown Seoul – the area offered plenty of room for booths giving away information or selling paraphernalia. 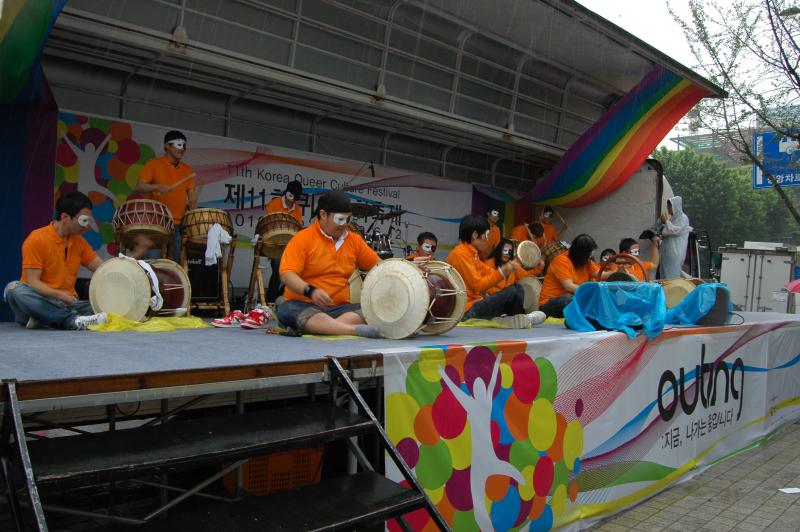 The stage, however, was the main attraction for most people. A group of Korean drummers took the stage during one less rainy session – a nice sound, and a reminder that musical talent isn’t limited by one’s sexuality. 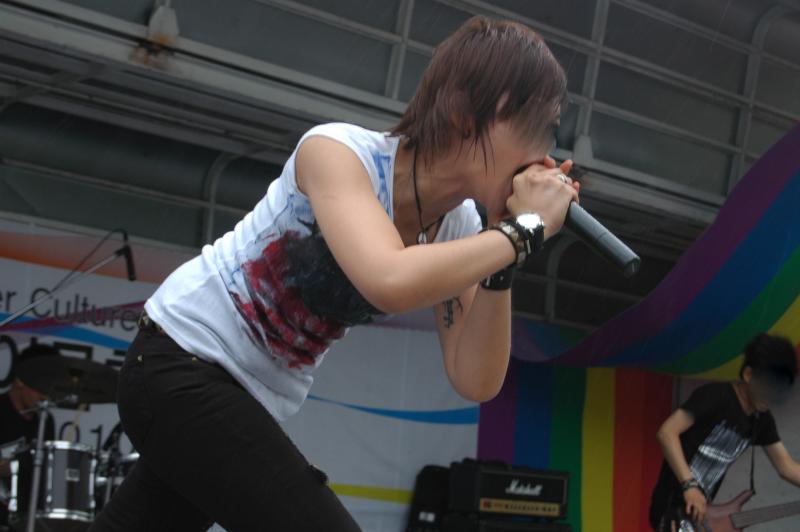 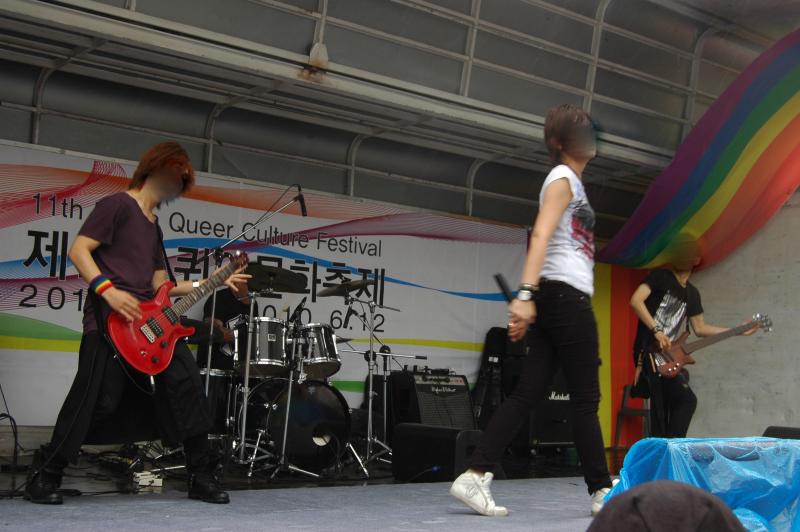 This gal could rock. She fronted the hard-rock quartet that played twice – once earlier in the afternoon, and again shortly before the parade. It’s not too often you hear female singers scream – but she did them well. 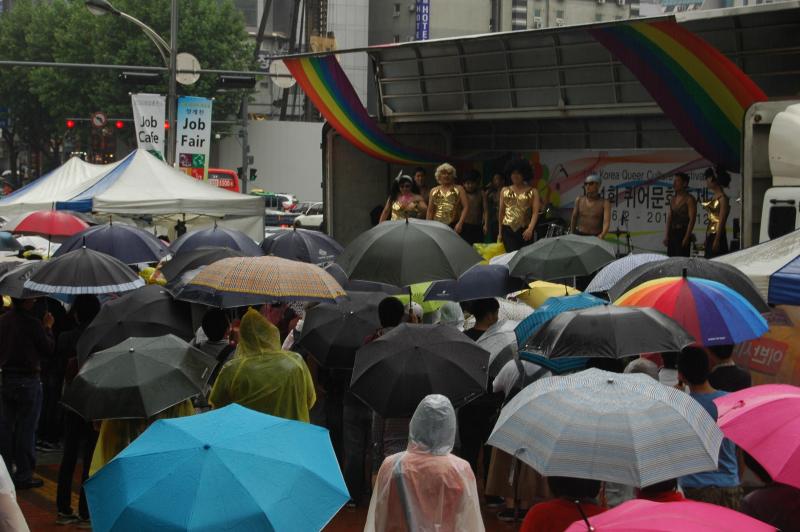 A singing and dancing number – cute, but the crowd had their attention on trying to stay dry amidst the rain. Quite a few people made their way inside a nearby building (not pictured) to lounge, pick up a raincoat, or just drink some beer.

The rain was a downer, but the show went on. With few one notable exception, most of the speeches were done in Korean; the sizable foreigner crowd ended up tuning much of it out. 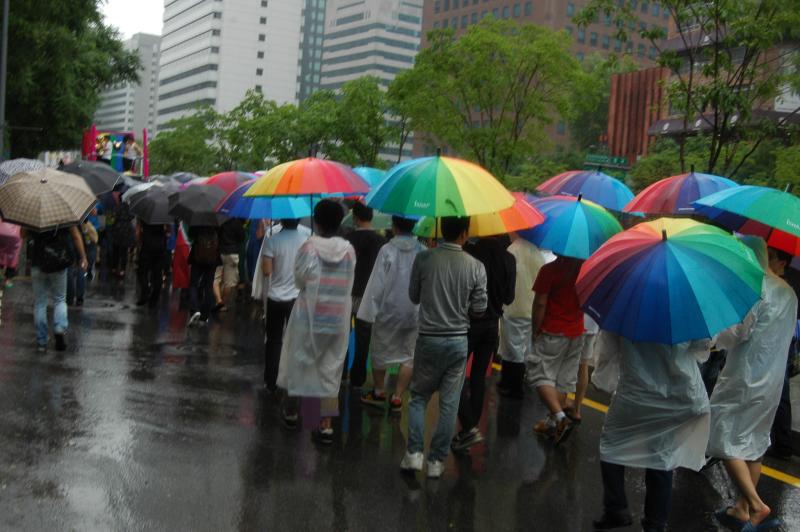 As it was last year, the parade was the highlight. Going down the street next to Cheonggyecheon and making a U-turn around the ubiquitous spiral was long enough to attract quite a few eyeballs towards the festivities. 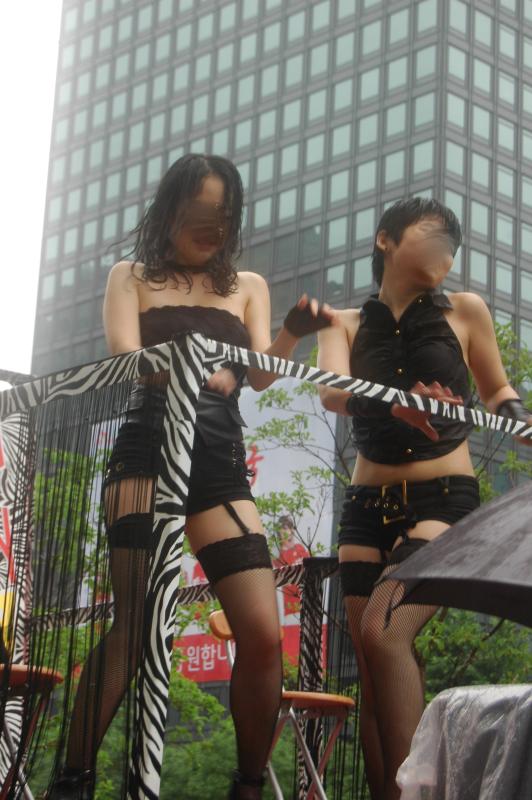 Easily the highlight of the parade – dancing to everything from ‘Lady Marmalade’ to a number of other classics, these two kept the crowd following them the whole time. 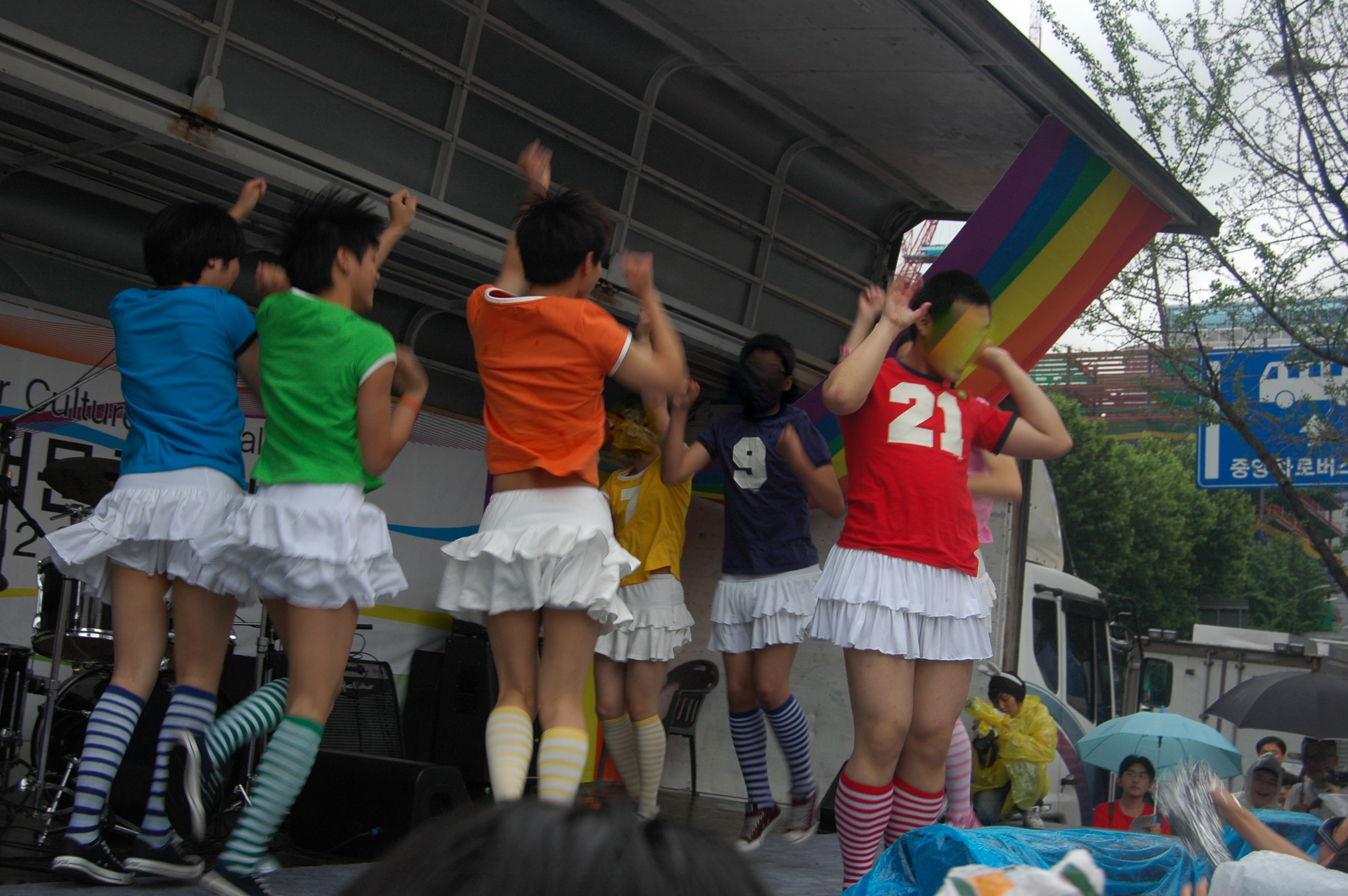 Once back at Berlin Plaza, a few more song and dance acts – nothing like seeing boys in cheerleading skirts dance to K-pop numbers.

There’s something to be said in taking pride in one’s self, whether you live a mainstream life or anything but. Indeed, the main message conveyed was that of pride – but what are you taking pride in? One’s personal choice of lifestyle? I remain surprised that the message chosen was not one meant to further acceptance or limit discrimination. To be fair, the annual event may be viewed as a ‘coming together’ of many organizations focused on the same general goal; the theme of ‘pride’ may be the one that best focuses the myriad groups.

For more information about the GLBT community in Korea, see the KQCF’s English language page for links and sponsors.