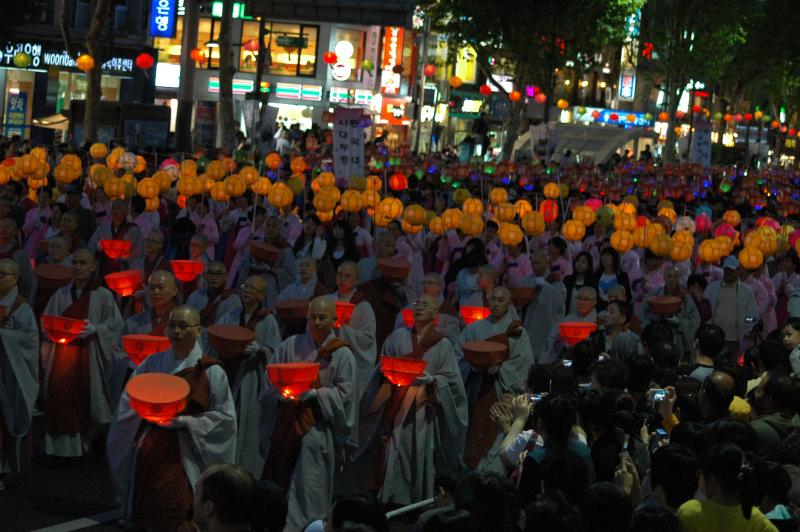 As promised, the Lotus Lantern Festival Parade – part one of the festival is here if you missed it. The Lady in Red and I found some seats on an underground market entrance; unless you’re in the front row you’ll need to be above the standing crowd. 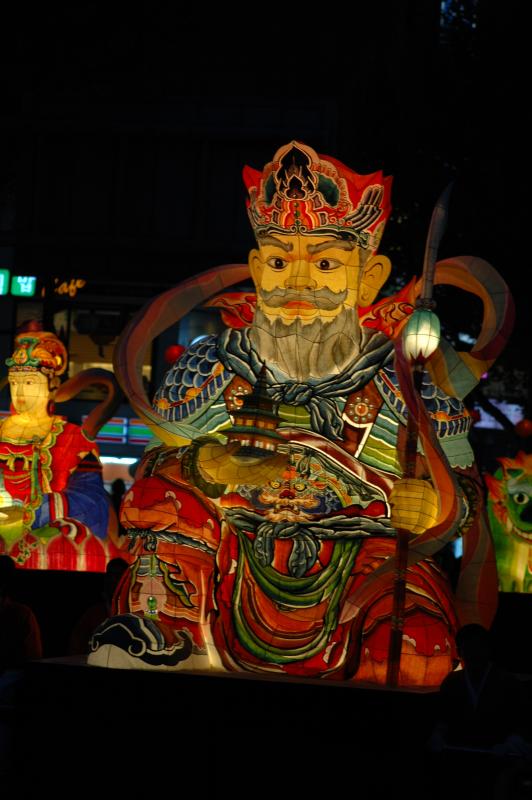 As promised, the Lotus Lantern Festival Parade – part one of the festival is here if you missed it. The Lady in Red and I found some seats on an underground market entrance; unless you’re in the front row you’ll need to be above the standing crowd.

The first thing to be aware of is the enormity of the crowd – you’re competing not only with locals, but with the sizable foreigner crowd as well. The second thing to be aware of is the huge number of parade walkers – although the most interesting exhibits are often the lanterns, watching legions of monks, nuns, and so on reminds you of how large this parade really is. 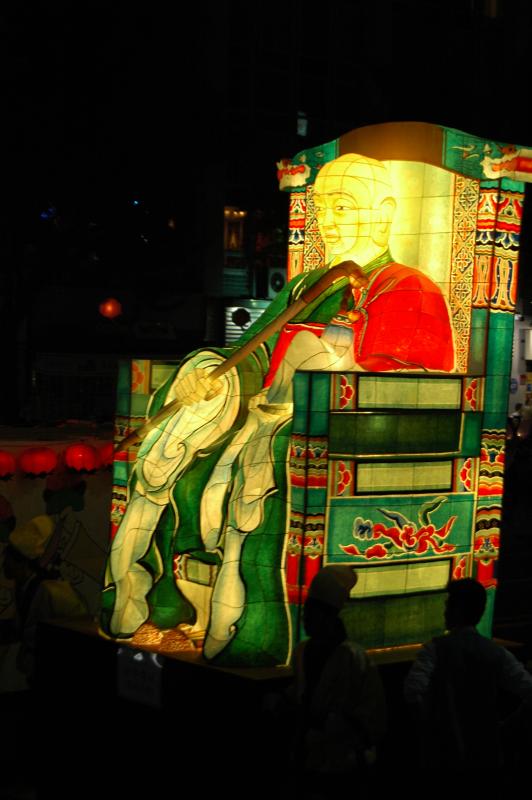 Buddha on a throne. 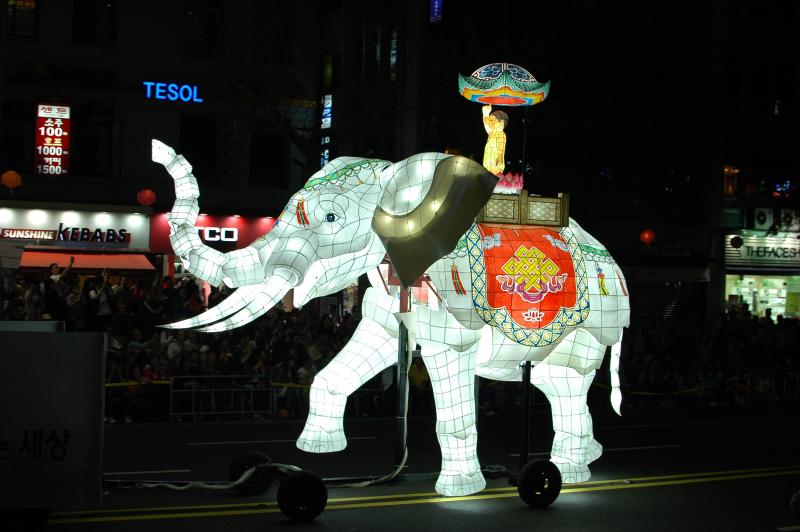 More than a few white elephants made an appearance, courtesy of different temples. In case you weren’t a Buddhist Studies major, a white elephant is a symbol of mental strength and have the power to produce rain. See this academic work for plenty more. 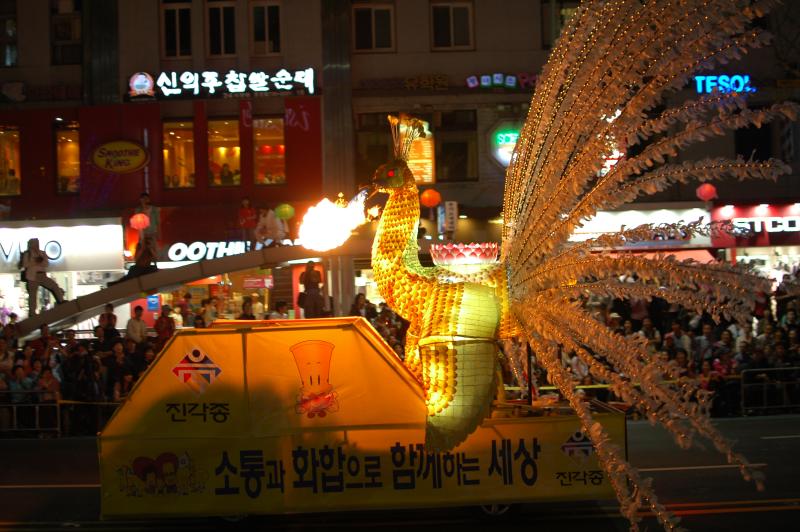 FIRE! From a peacock? 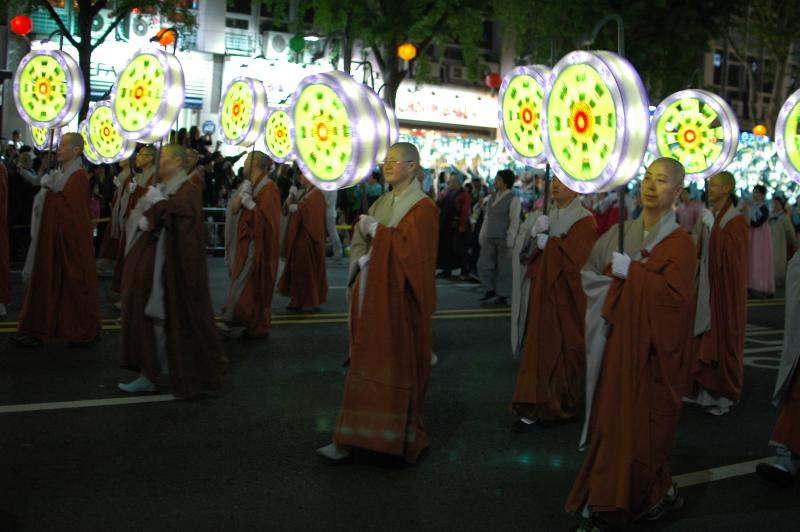 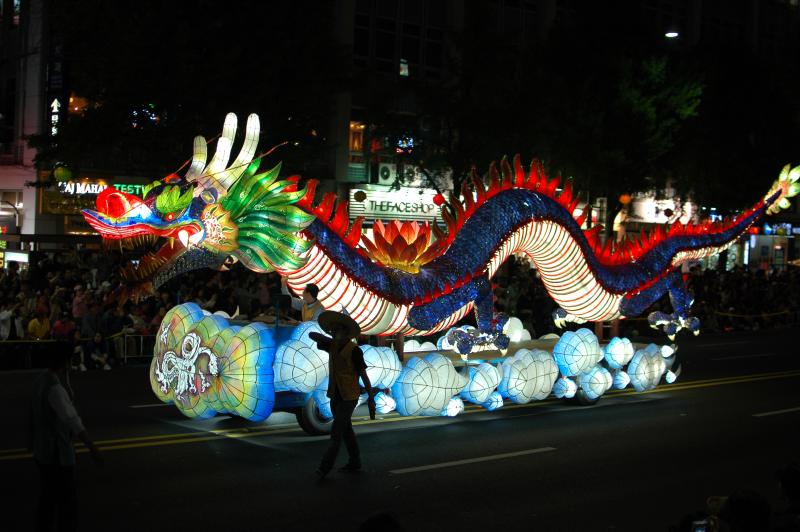 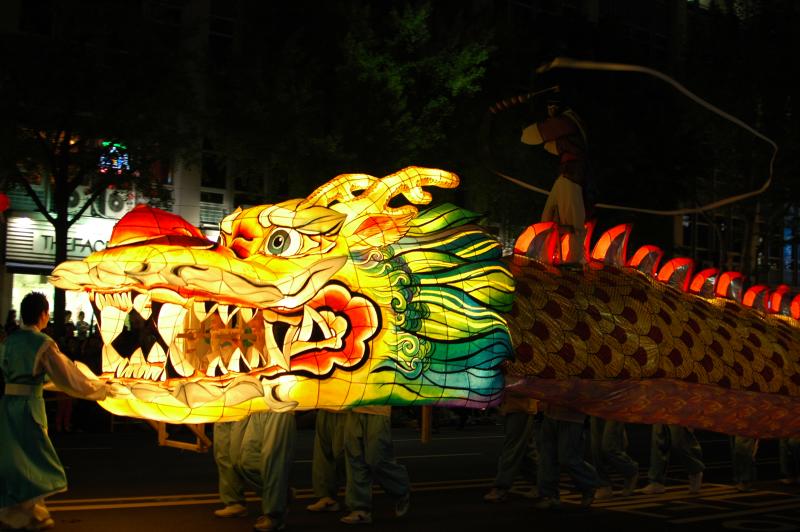 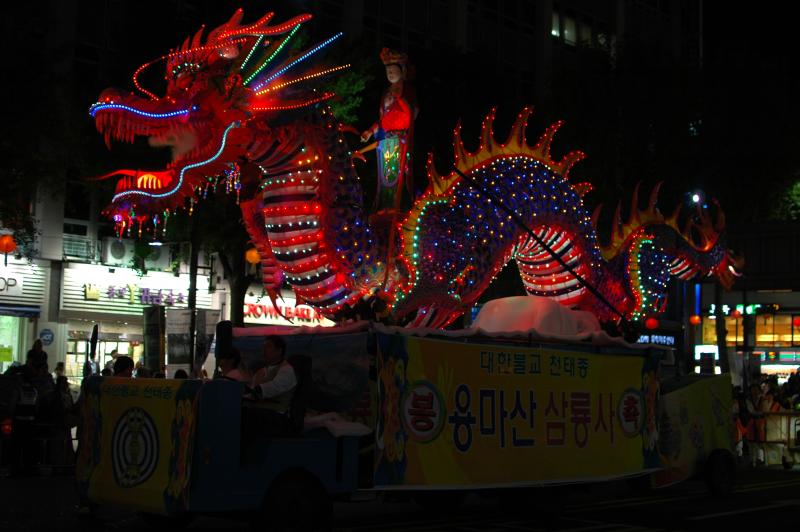 Dragons are shape shifters, able to transform at will, from as small as the silkworm to a giant that fills the entire sky. Dragons are depicted in one of two colors, green or brown. The green, or azure dragon of Buddhism ascends into the sky at the spring equinox; it represents the light’s increasing power in springtime and the easterly direction of the sunrise. The brown dragon is the autumn equinox, when it descends into a deep pool, encasing itself in mud until the next spring, but its spirit is still with the practitioner bringing wealth and health. The pearls, or jewels clutched in the claws of the dragon represent wisdom and health. The dragon can control the weather by squeezing the jewels to produce dew, rain or even downpours when clutched tightly. The dragon is the vehicle of Vairochana, the white Buddha of the center or the east. 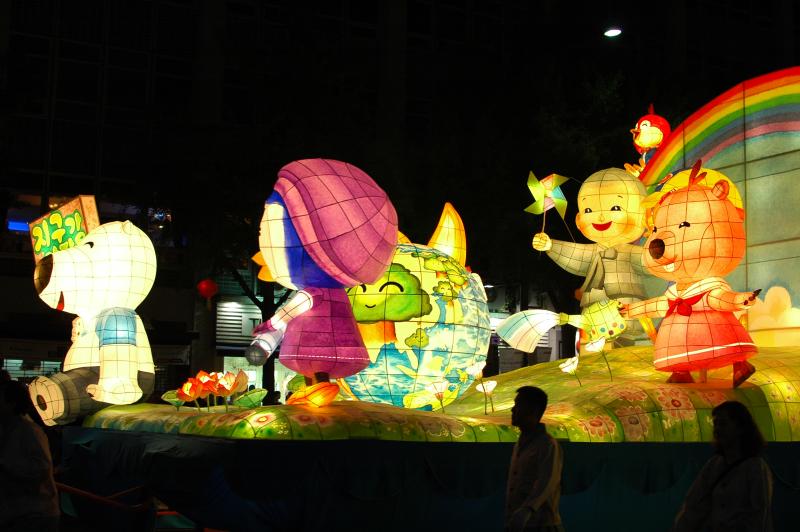 Nothing like cartoon characters and the baby Buddha on the same float. 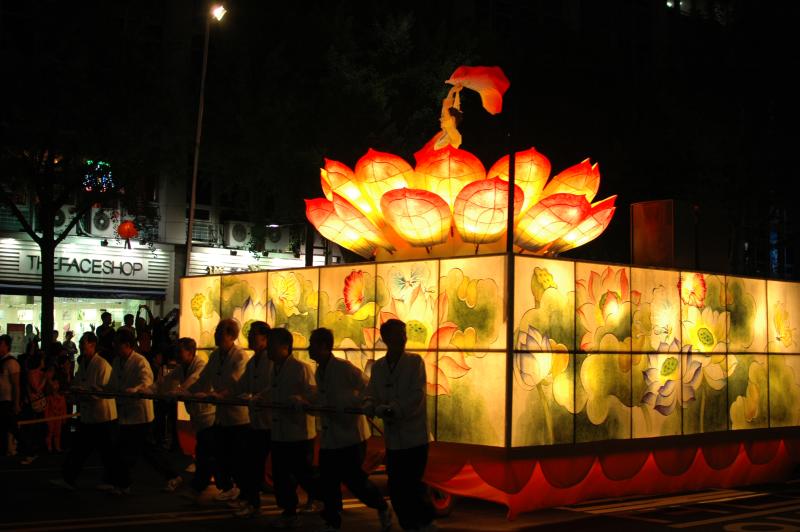 It takes quite a few people to pull some floats. Note the graceful dancer on the lotus flower. 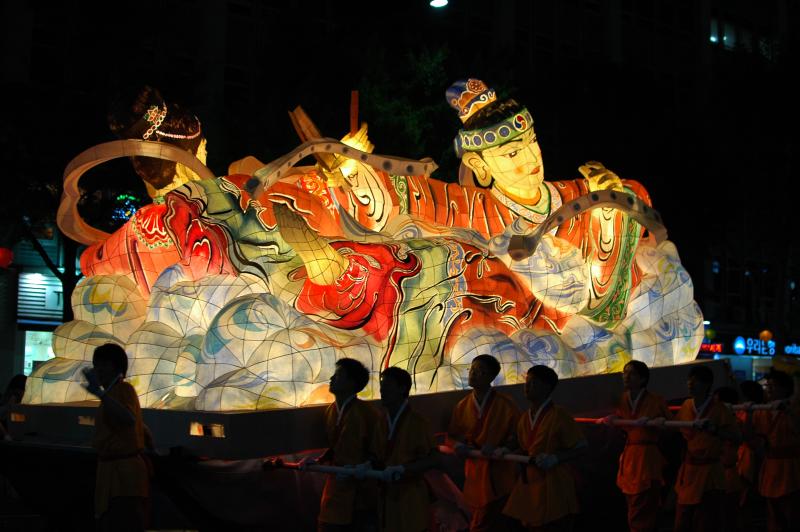 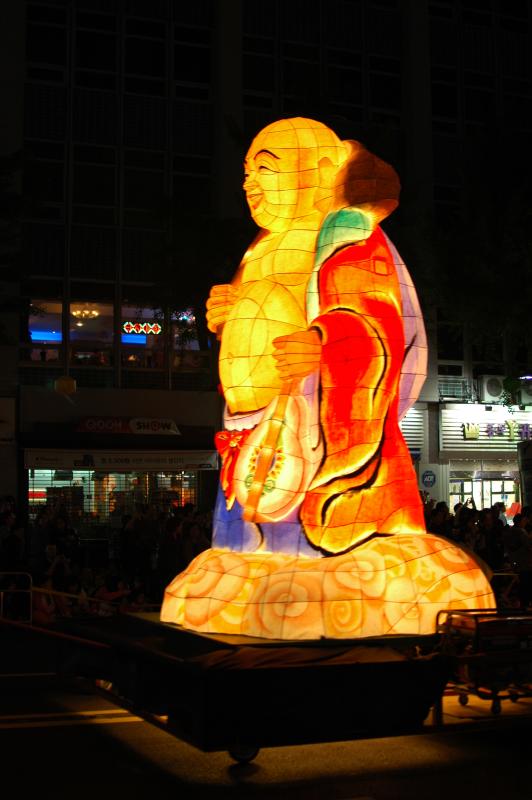 It’s kind of a shame that the ‘big belly Buddha’ is one of those images a lot of people get when they think of the Buddha.

After an hour and a half of lanterns and endless thousands of people walking down the street, the parade ended and the closing ceremony began. That was our cue to head for the subway. Along the way, we ran into Roboseyo and ZenKimchi, who were also enjoying the parade elsewhere along the route. We meandered down towards Tapgol Park, where a number of lanterns lit up the darkened park: 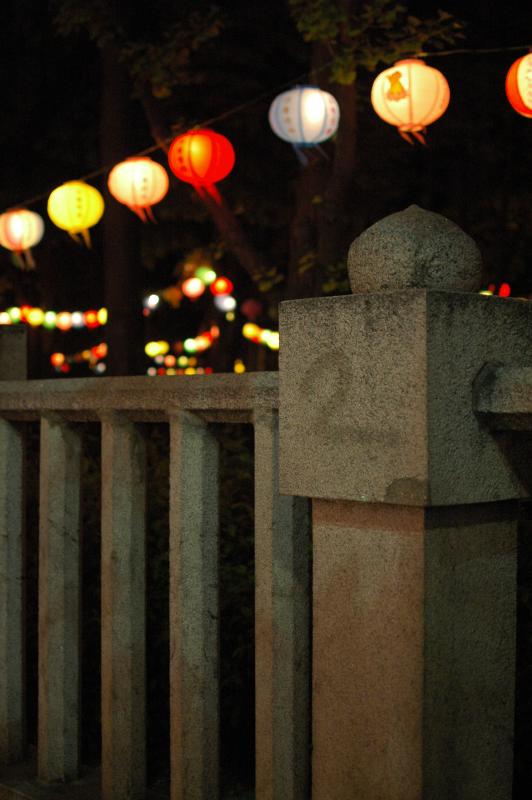 My dear readers, this parade is highly recommended as one of the few events Seoul puts on that’s worth attending year after year. The afternoon festival is nice, if increasingly touristy, but the parade continues to shine.

Ratings for the event (out of 5 taeguks):