WARNING: This post is rated NSFW (Not Safe For Work) and for adults only – if on a work computer or around kids, PLEASE PLEASE PLEASE hit the ‘back’ button on your browser before scrolling down. If you’re not around kids and are comfortable with seeing anatomically correct statues in various, er, adult positions, then continue on. You have been warned. 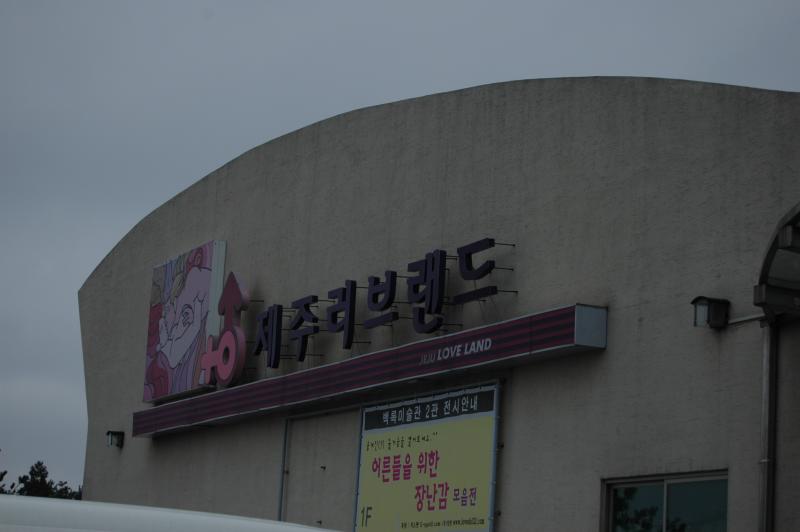 WARNING: This post is rated NSFW (Not Safe For Work) and for adults only – if on a work computer or around kids, PLEASE PLEASE PLEASE hit the ‘back’ button on your browser before scrolling down. If you’re not around kids and are comfortable with seeing anatomically correct statues in various, er, adult positions, then continue on. You have been warned.

If Loveland isn’t the most controversial tourist destination in Korea (the Demilitarized Zone, or DMZ, being the only other possibility worth mentioning), I’m not sure what is. Plant what amounts to a sex park on the largest island of a traditionally conservative country and see what kind of reaction you get.

Having a sex park on Jeju actually does a bit of sense after a history lesson. Jeju-do (Jeju island) has served as a honeymoon destination for Koreans since the Korean War. Some marriages were arranged by parents, meaning there was a bit of awkwardness of trying to bed this new spouse they may have just met. Also, Koreans weren’t allowed to leave the country until the early 1990’s meant ‘getting away’ was going to Jeju instead of Thailand. According to Wikipedia and Der Speigel, some hotel employees served as ‘professional icebreakers’ (read: marriage consummation helpers) while hotels offered ‘entertainment packages’ to help couples relax and, um, get things started.

First planned in 2002 and opened in November of 2004, 20 Hongik University students contributed sculptures and other artwork to the site in an effort to celebrate sex and the human form. While most pieces certainly qualify as art, remember the entire park is about sex. If it’s any consolation, admission is limited to those 19 years of age or older; kids or the underaged have an inoffensive play area to enjoy while the adults go sightseeing.

This is your final warning – if kids are around or you’re uncomfortable with seeing the human form displayed a frank fashion, click your ‘back’ button or go here to Google something else. 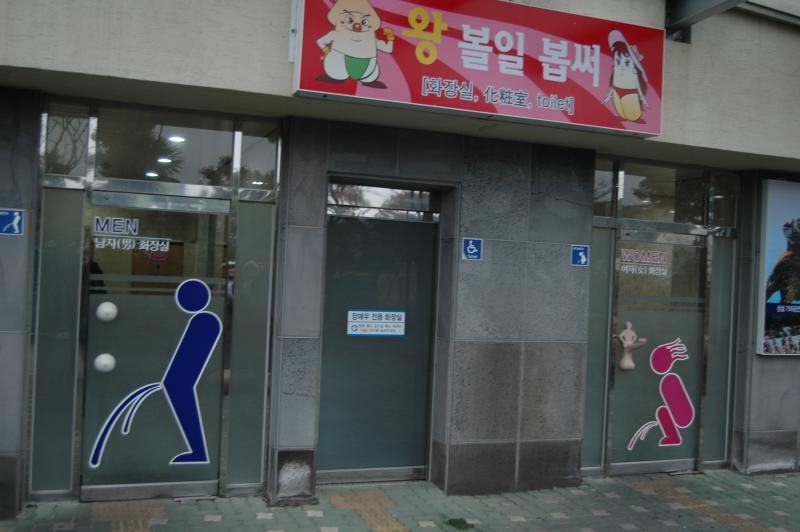 One of the more unusual displays introduces itself shortly after arriving. Note the door handles. 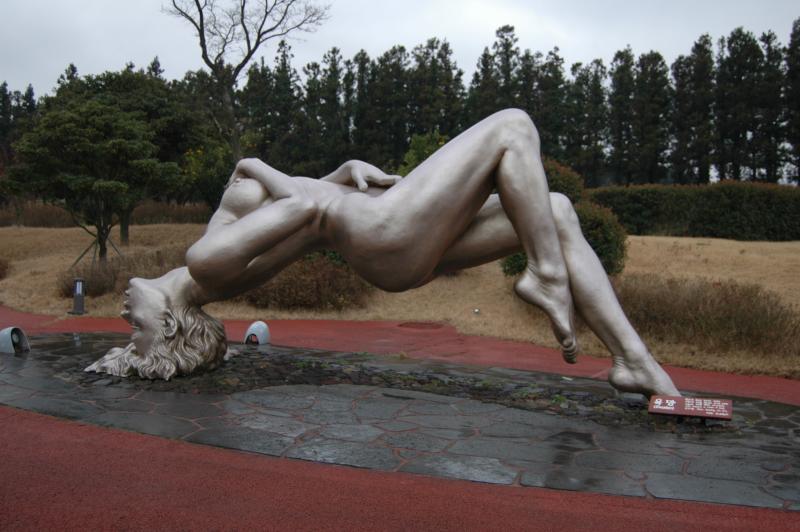 Entitled 욕망 (Desire); most sculptures have stood (or arched their back) through all four of Korea’s distinct seasons, and didn’t show any wear or tear. Unfortunately, most descriptions are in Korean, but they’re not really needed. You get the idea. 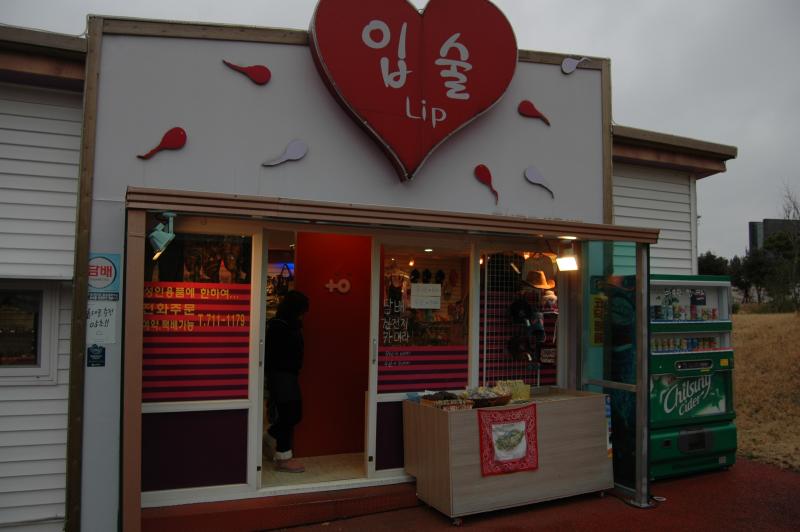 A souvenir store early on in the park – a little disappointing that they sold little of ‘racy’ value. 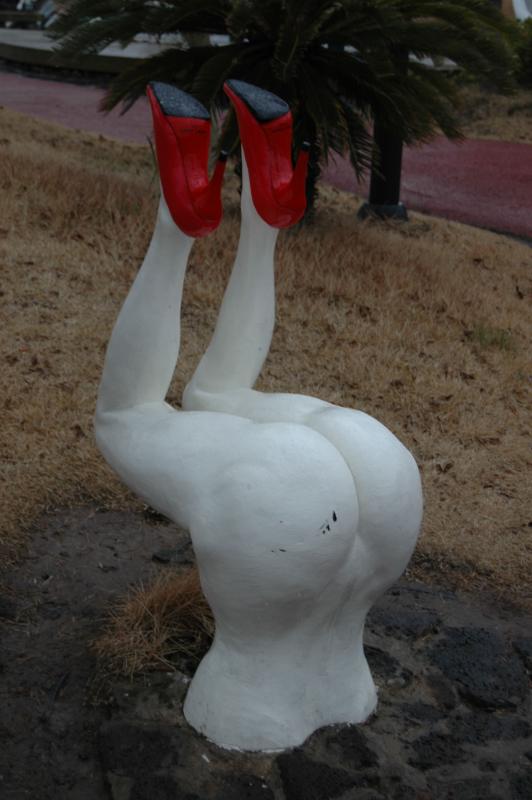 Entitled 하이힐 (High Heel) – I’m rather surprised I didn’t see anyone posing with (or on!) the statues. 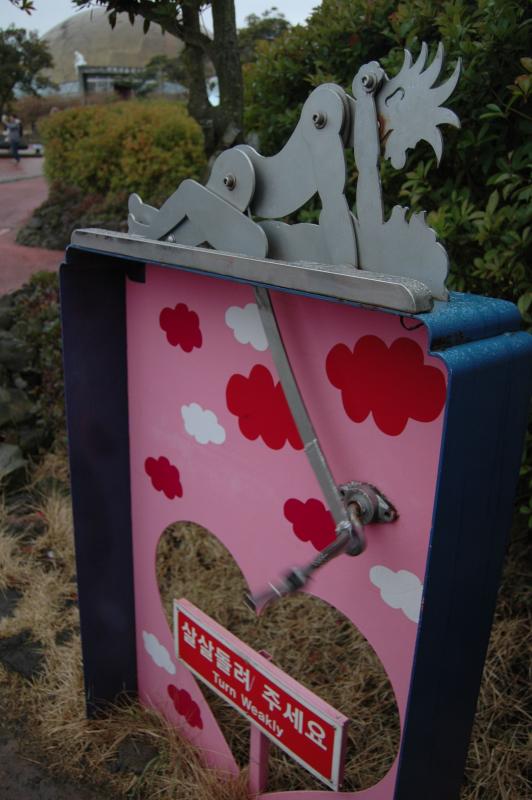 Turn the handle and watch the… er… motion in the ocean. 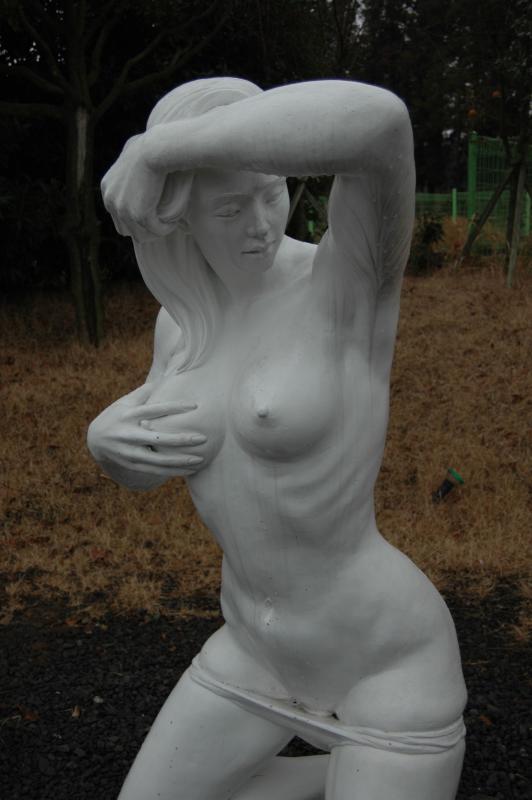 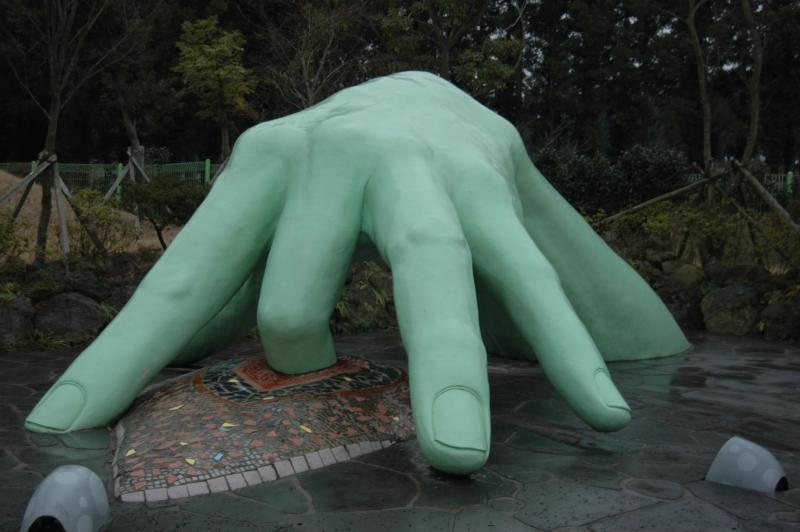 I didn’t get this one at first… but then again, I’m a guy – I don’t finger myself too often. 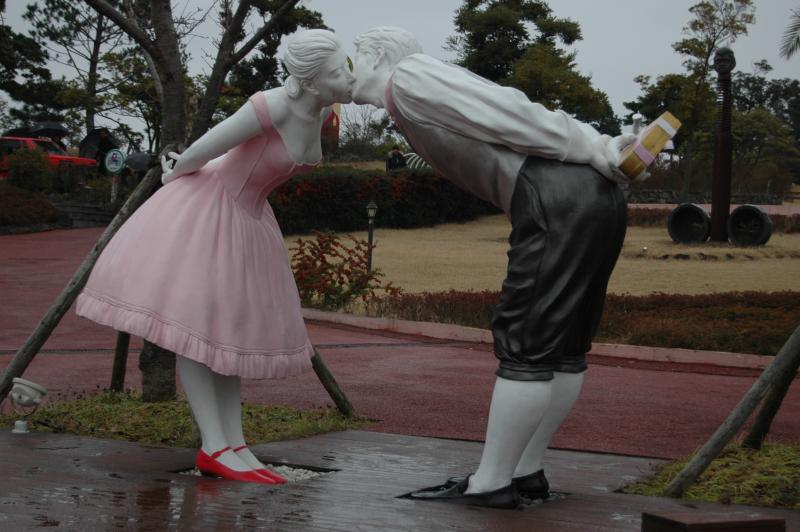 One of the few (mostly) safe-for-work photos I was able to take. Just ignore the phallic symbol in the background and it’s cool. 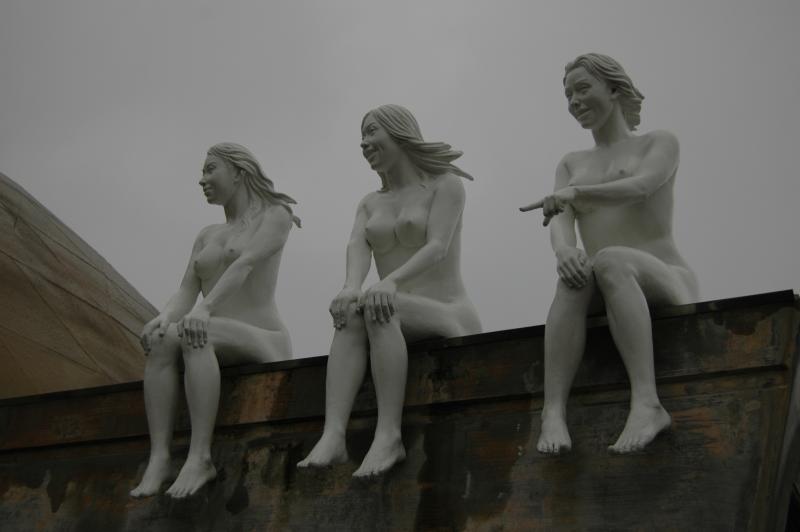 Entitled 미녀삼총사 (The Three Musketeers of A Beauty), these three ladies were sitting on the top of the next building looking down at the crowd. Must be cold up there… 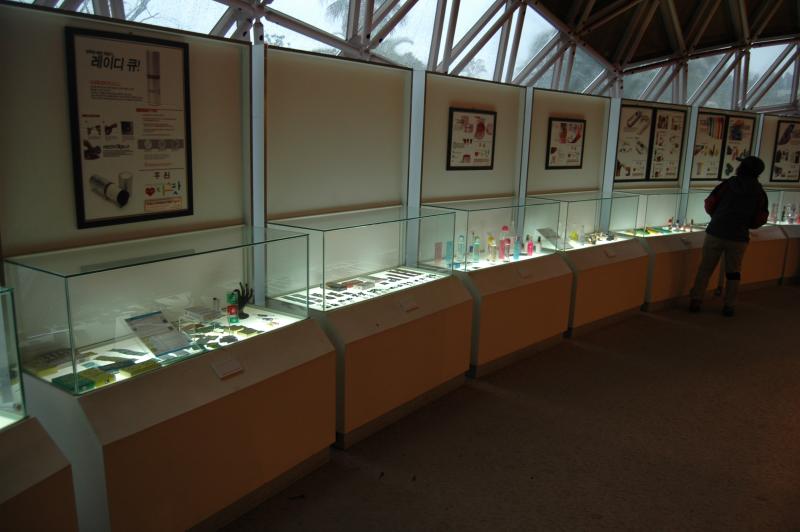 Collections of toys greeted you, along with the introductions (Korean only) to them. More than a few Korean ajummas seemed puzzled when passing by these devices, as if pleasuring yourself was somehow dirty or wrong. 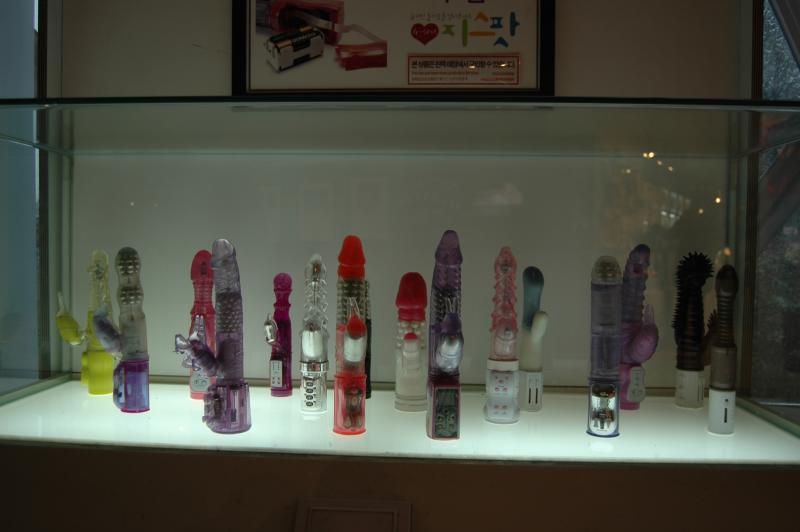 Some toys needed no introduction, however… 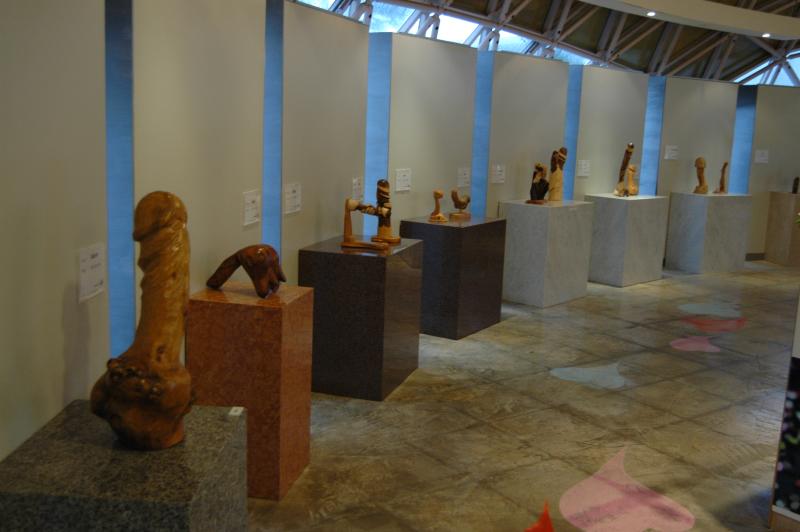 The same ajummas seen puzzled by the vibrators were quite animated over these phallic symbols. Why? Who knows… 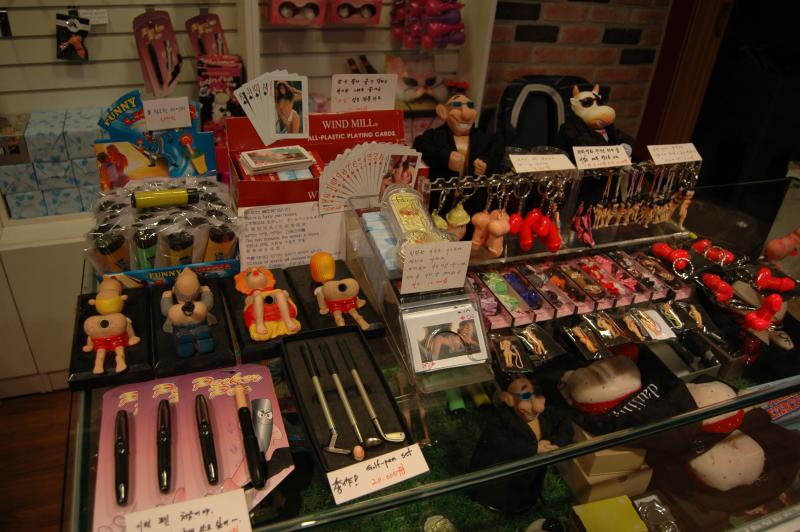 While not quite a perfect substitute for a Hustler store in the U.S., it’s one of only a handful of stores I’ve seen selling sex-related products in South Korea. 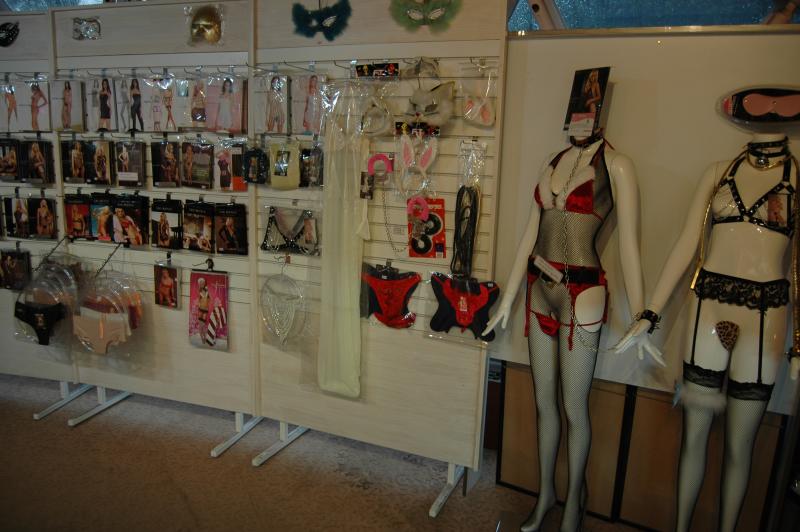 Quite a large selection – bring your adventurous partner and have some fun.

We headed up to the second floor, where a number of displays awaited us: 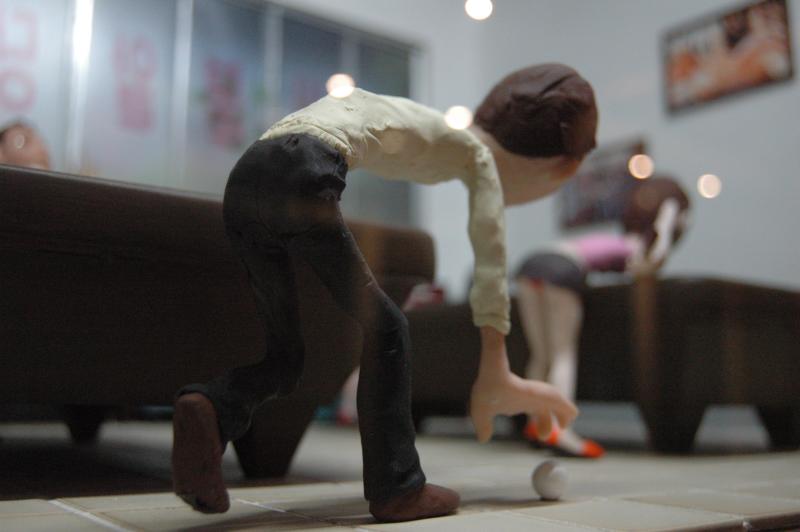 So that’s why the girls always win in pool… Other displays included couples fornicating in different rooms of the house and an after-dinner party that seemed straight out of an American anti-sexual-harassment video (not pictured). 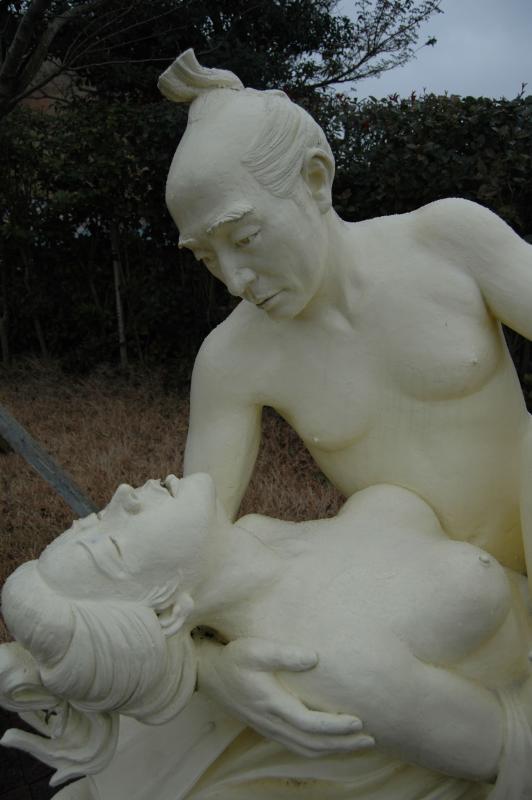 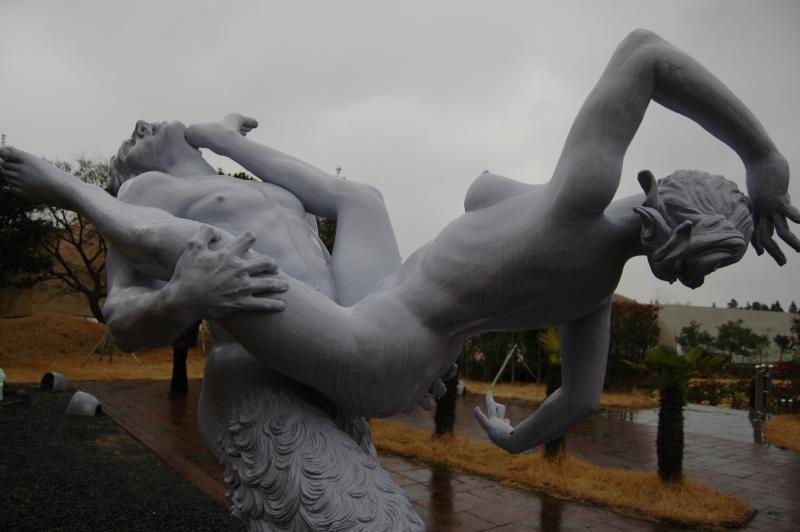 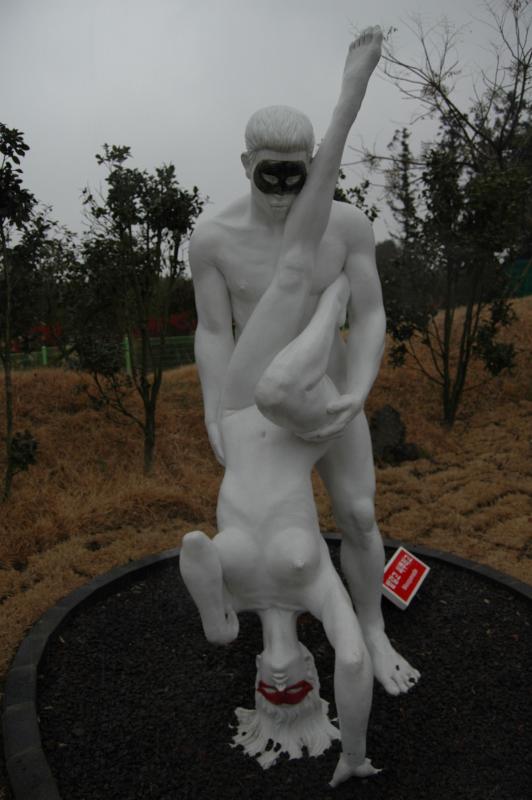 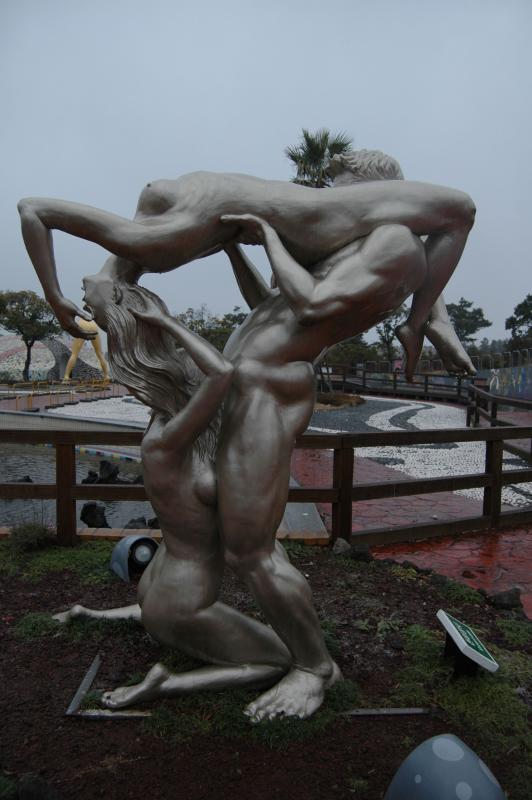 Gotta love the muscle definition on the male figure. 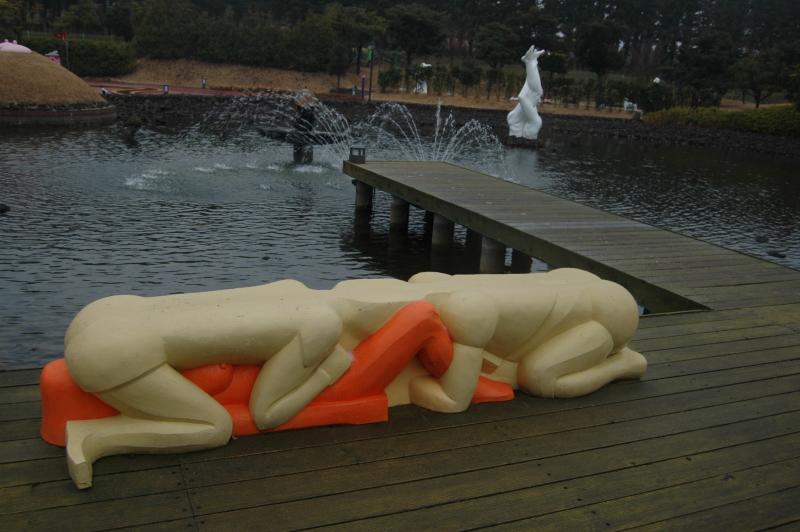 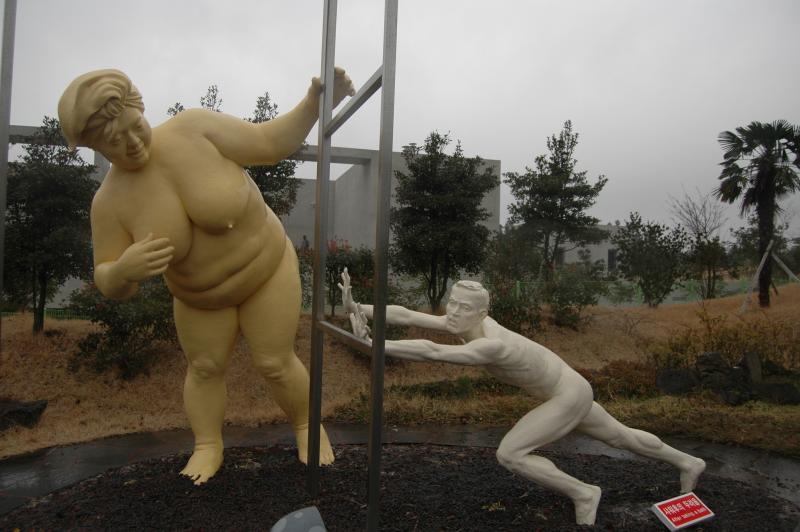 Entitled 샤워후의 두려움 (After taking a bath), this was one of a few different sculptures featured a very skinny man attempting to get away from the obese woman. Supposedly this has something to do with an ajumma trying to fill her voracious appetite, trying to pull her ajosshi husband back to her. 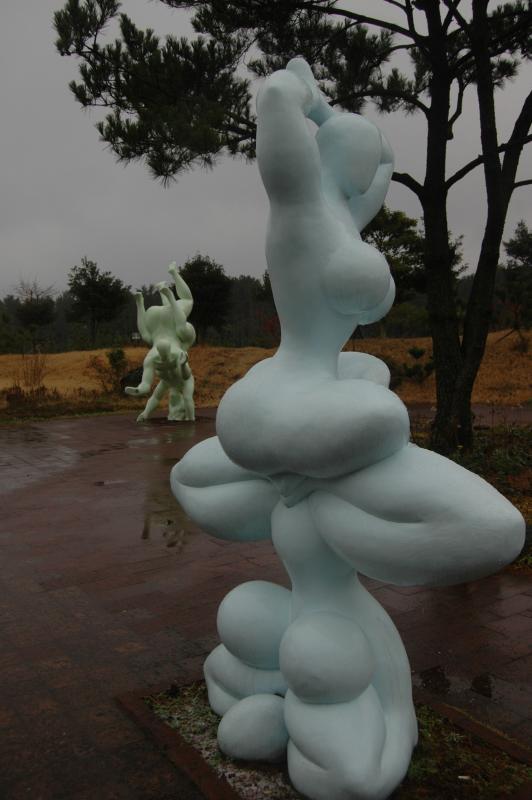 A couple (but only a couple) were on the more abstract side – interesting, and by this point figuring out what was what wasn’t too difficult. 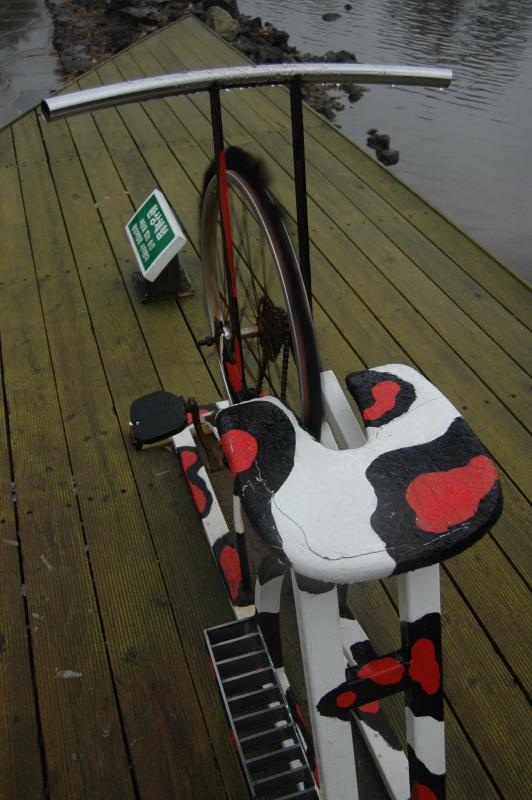 Ladies and gentlemen, you’re a smart crowd. I won’t offend your intelligence by explaining what pedaling this device may accomplish. I would say that it is outdoors, and probably not clean…

While Loveland is certainly not like the rest of Korea (Gangwon-do’s Penis Park in Samcheok being a rare exception), it’s highly recommended and worth a visit if planning a trip to Jeju. Few of the Koreans I saw seemed shocked by the encounter – presumably you know what the place is about being setting out on the trip to get here. Come with an open-mind, an adventuresome partner, and a willingness to experience art; two out of three isn’t bad either.

Directions to Loveland: Loveland is located 10 minutes from Jeju International Airport – a taxi will be the fastest and easiest option. If part of a group tour, let the bus driver get there. Taking a local bus is also an option – from Jeju’s airport, walk 200 meters to the Daho Village (near Goryeo Gas Station), then take bus 38 or 887 to Halla Hospital. Transfer to bus 1100, and get off at the Livestock Farming Complex. Like I said, take a taxi.