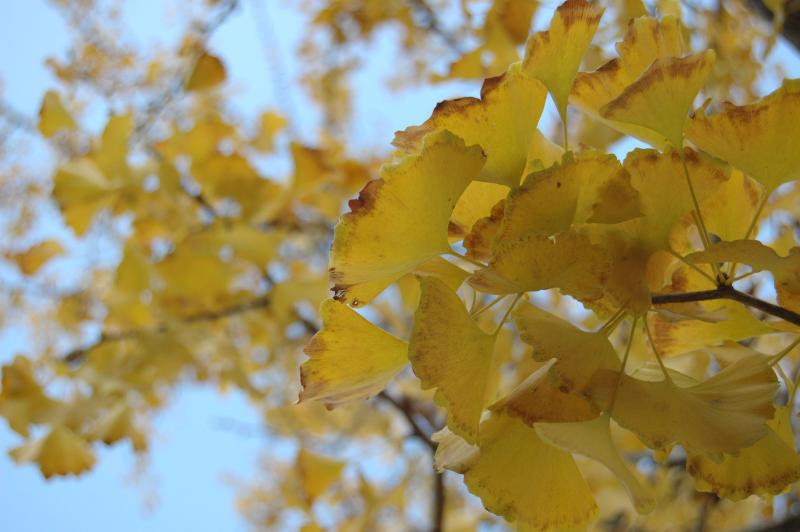 The ginkgo leaves surrounding Osaka Castle and park welcome you. First built in 1496 by a high-ranking monk, Osaka Castle has seen about as much warfare, destruction, and reconstruction as most Korean palaces. Today’s incarnation of the eight-story castle serves as a museum to the centuries of history stored within the area.

The ginkgo leaves surrounding Osaka Castle and park welcome you. First built in 1496 by a high-ranking monk, Osaka Castle has seen about as much warfare, destruction, and reconstruction as most Korean palaces. Today’s incarnation of the eight-story castle serves as a museum to the centuries of history stored within the area. 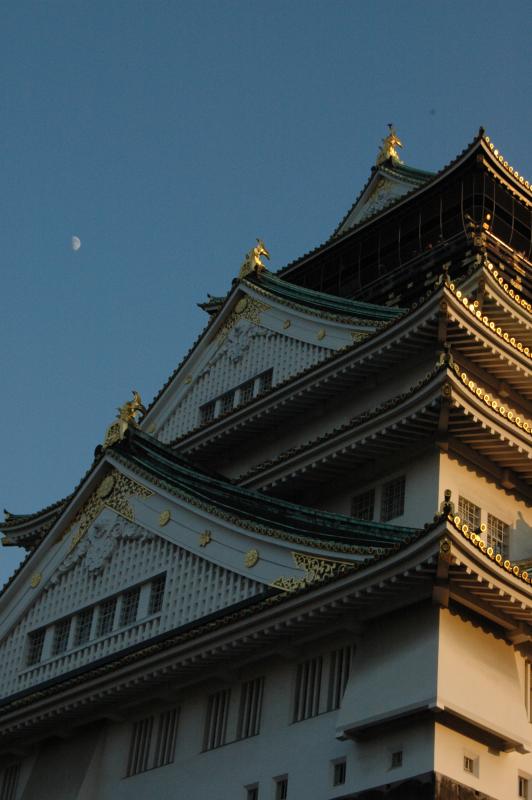 Alternating between galleries and exhibition halls, it’s definitely tourist-friendly. With signs in several languages and most descriptions / explanations in English, it’s considered one of the ‘must-see’ destinations in Osaka. 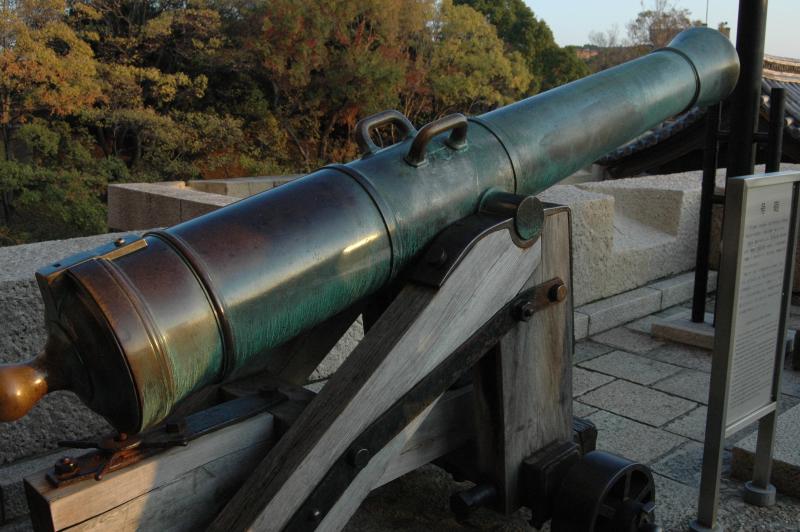 Used as a signal gun or a noon marker before folks had cell phones or watches, this muzzle-loaded cannon fell into disuse sometime during the 1920’s, although the sign doesn’t admit a reason. Originally manufactured in 1863, the cannon produced a blast three times a day for several years before switching to a noon bang (or don, in Japanese). 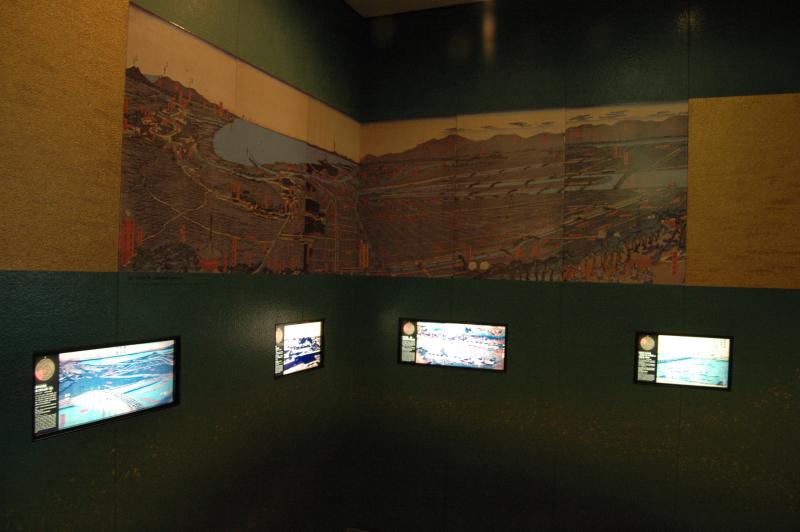 As you might have guessed, this castle has been reconstructed many times. The result is that nothing (or almost nothing) is extant from the original building. Start by taking the elevator to the fifth floor, then climb the ‘up’ stairs to the eighth and top floor. Although the videos played only Japanese, the English text describing the scenes was more than enough. 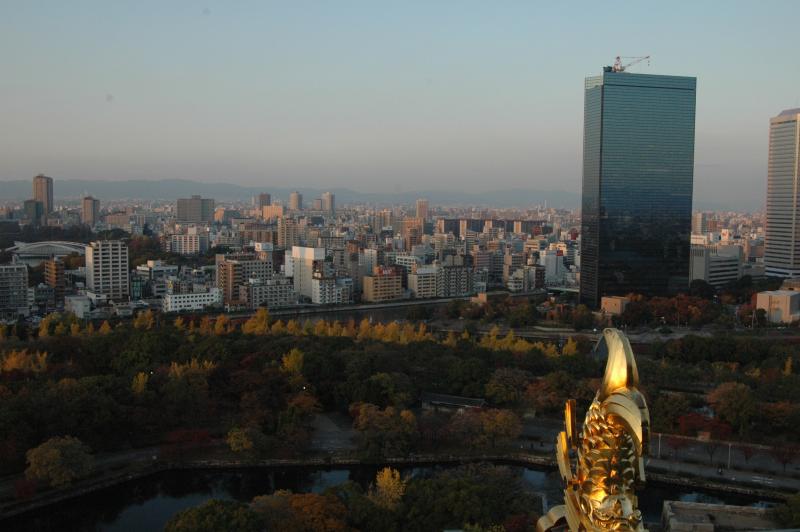 From the Observation Deck on the 8th floor looking out at the city – quite nice. 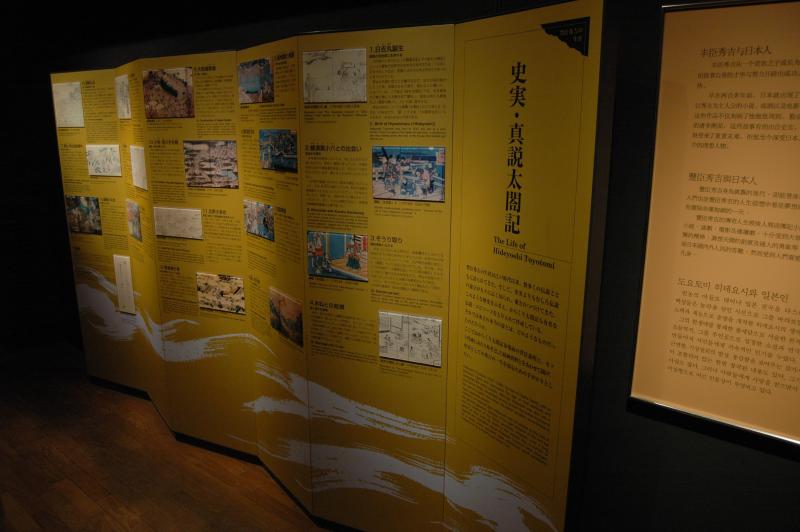 An entire floor is dedicated to Hideyoshi Toyotomi, who built the second incarnation of Osaka Castle. He’s also credited with unifying the nation under his leadership in 1590, and Osaka Castle was his stronghold until he died in the Summer War in Osaka (1615). 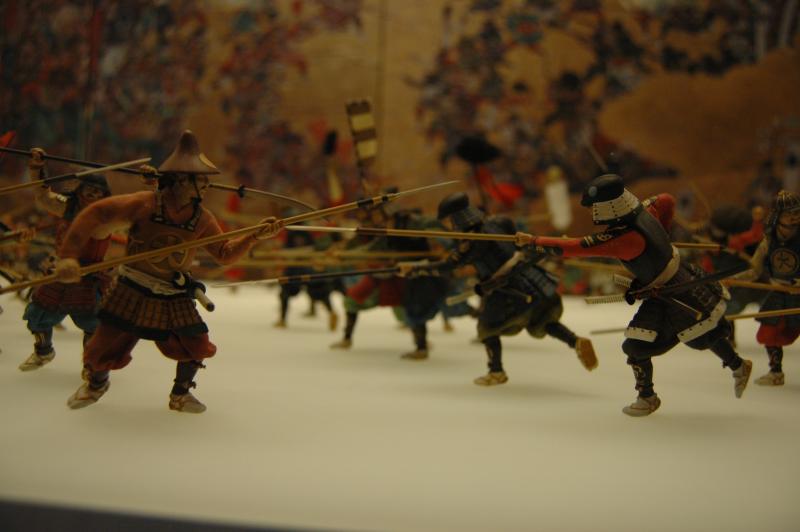 I love miniatures – especially when they’re so intricately detailed and tell an interesting story. This particular scene uses hundreds of miniatures to depict a battle in the Summer War of 1615, when the castle was overtaken by Tadanao Matsudaira’s troops. 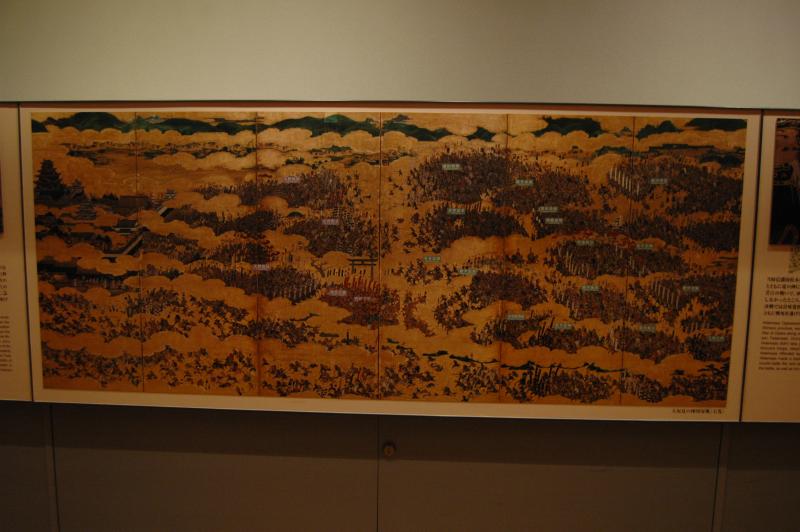 An incredibly detailed folding screen, showing the same war as before. The screen depicts over five thousand people, some of which can be identified. Talk about having a photographic memory…
No pictures are allowed on the third and fourth floors, which feature rotating exhibits of relics and artifacts. During my visit, there was plenty of original art of documents, a few of which showed lists of ranking. The third floor shows a recreation of Hideyoshi Toyotomi’s Gold Tea Room, where everything was supposedly gold coated or plated. 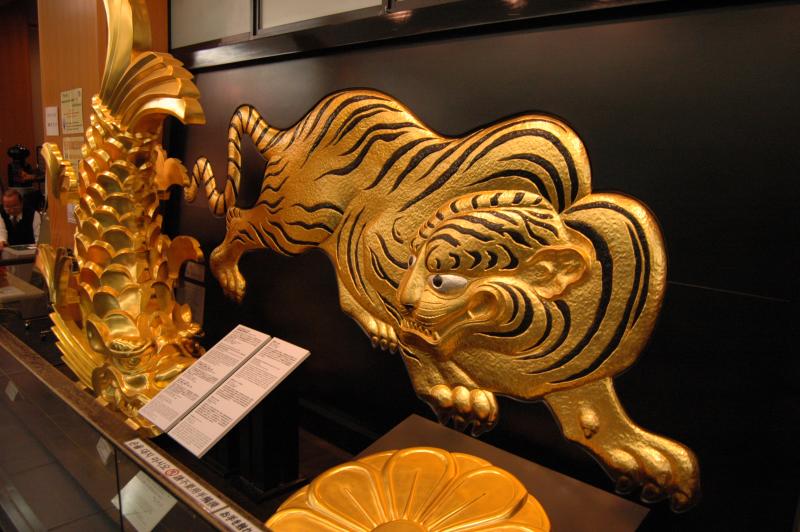 On the second floor, there’s plenty of information about Osaka Castle itself – and a few other replicas worth seeing. The ‘tiger watching the game’, called a fusetora, decorated the second incarnation of the castle during Toyotomi’s reign, and was brought back as part of the current incarnation. On left, the shachi-gawara, or ‘the roof tile in the form of a legendary dolphin-like fish’, is a little harder to make up than you might think. 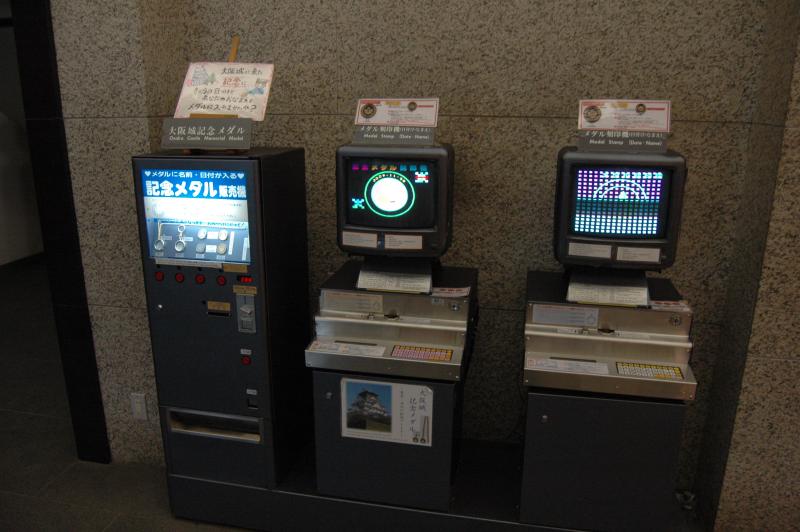 Just outside the souvenir shop on the first floor, you can get a medal stamp made with your name on it. As futuristic as Japan seems to be, they still use these DOS-like computers in one of their largest tourist attractions? 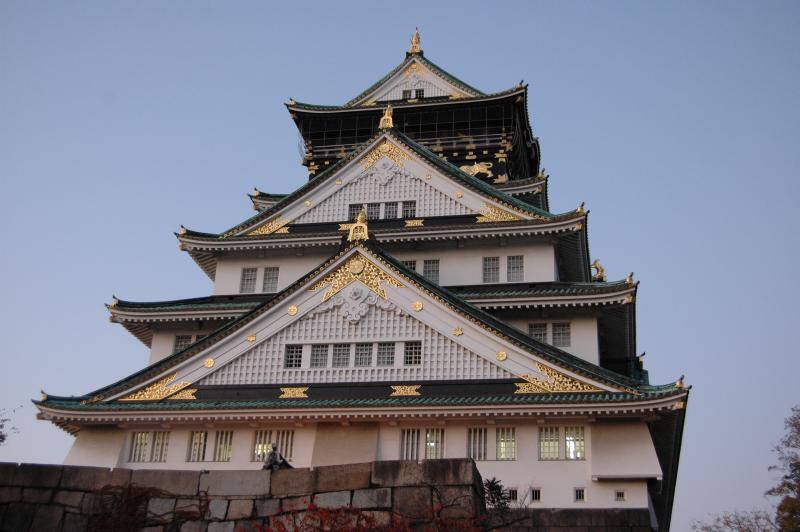 A final look at the castle before moving on – definitely a sight. 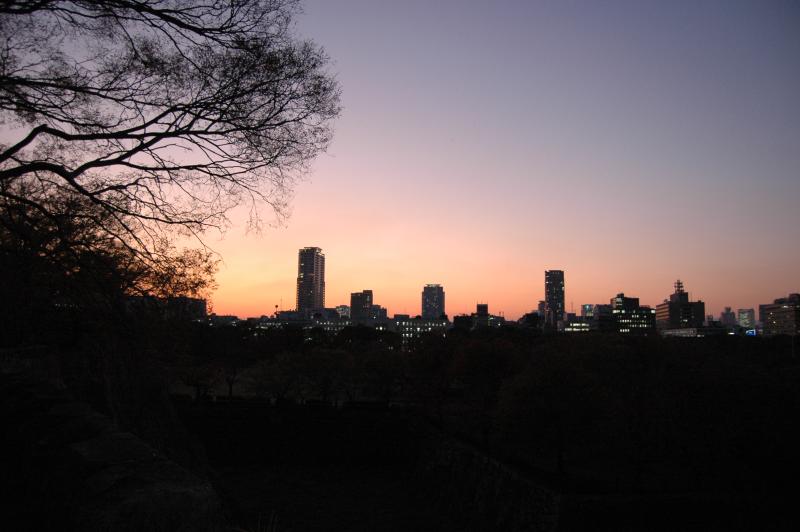 I can’t think of a better ending.
Although tourist-friendly, Osaka Castle gives a lot of details – almost too many. It’s certainly not a sight one can rush through and expect to comprehend the story. Take at least a couple hours to thoroughly enjoy the sights. The park that surrounds the castle is also worth strolling through in the spring or fall; during the winter it might be worth skipping in favor of someplace warmer.
Ratings (out of 5 taeguks):
Ease to arrive:

Directions to Osaka Castle: Take the Tanimachi or Chuo line of the Osaka subway system to the Tanimachi 4-chome station. Take exit 1B to street level, then walk about 250 meters. Look for it on your left, just past the Osaka Museum of History. Many other subways have stops, including the Mido-suji line (the Yodoyabashi station), the Tanimachi-suji line (the Tenmabashi station), and the Nagahori-tsurumiryokuchi line (the Tanimachi 6-chome station) are just a few. Open 9am-5pm; last admission at 4:30pm; admission 600 yen. Handicapped accessible via elevator. Learn more information at www.osakacastle.net.