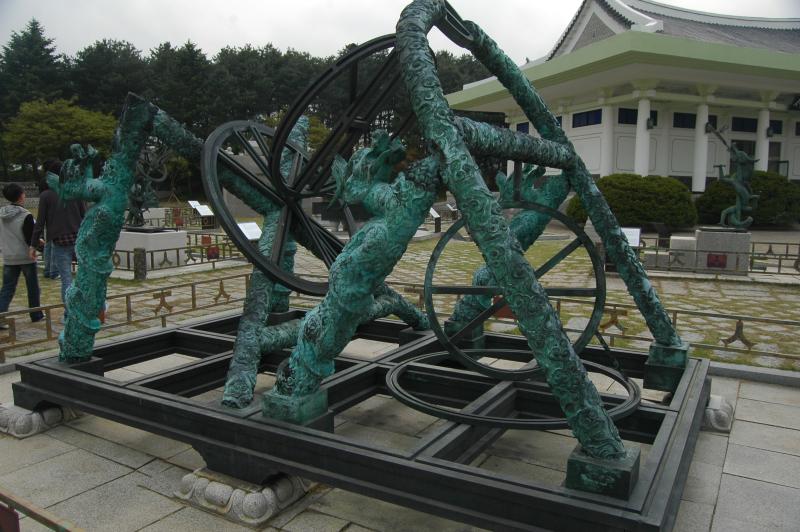 With a little help, the tomb of Korea’s greatest leader could rise to become a great tourist destination. Most of the pieces are already here – good English explanations, interesting things to see – but one issue makes the place less than tourist-friendly.

With a little help, the tomb of Korea’s greatest leader could rise to become a great tourist destination. Most of the pieces are already here – good English explanations, interesting things to see – but one issue makes the place less than tourist-friendly.

I traveled to Yeoju specifically to see this tomb, so my expectations were a bit high – this is King Sejong after all. The man’s resume is extensive – creating the Korean alphabet that’s still used today, a celestial globe, a sundial, a water clock, and a rain gauge all happened during his reign. Even today, he’s still thought of as the highest-regarded king of the Joseon Dynasty. 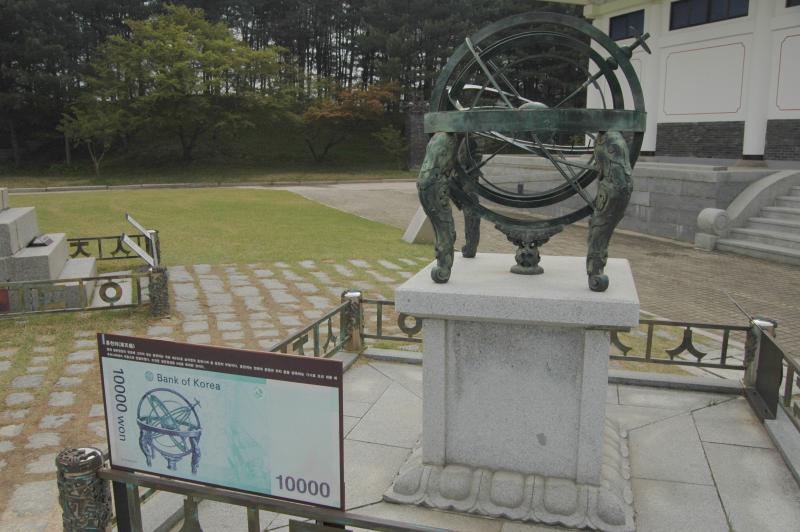 Pay 500 won to get in – you probably paid more for your last bottle of water – then explore the front yard. It’s filled with exhibits of scientific discovery, and there’s more than enough English explanations to help you understand. One highlight is the honsang, or celestial globe. Although the original hasn’t survived, it was designed to correspond with the earth’s rotation and show the movement of stars throughout the night. At almost twice the size of the original, the recreation displays the 1,464 stars engraved on the bronze surface.

Another highlight, the honcheonui, (above) is a celestial globe like the one on the 10,000 won bill. While an original example from 1669 rests at the Korea University Museum, this recreation is significantly larger – all the better to see. 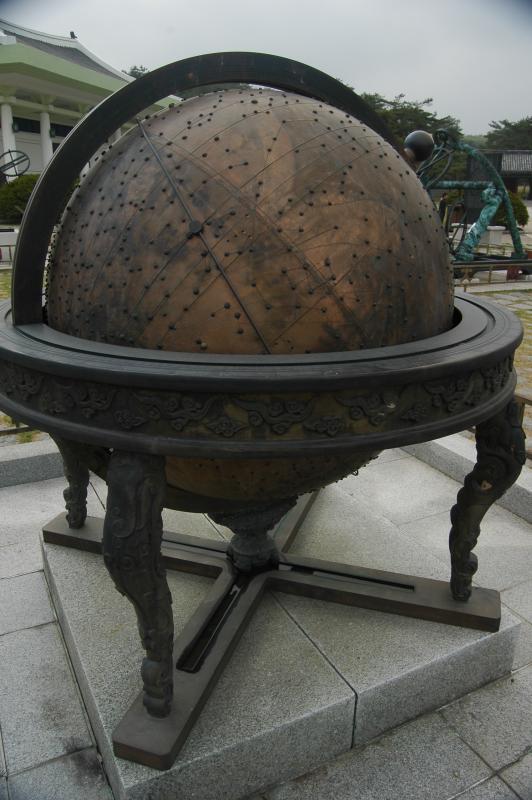 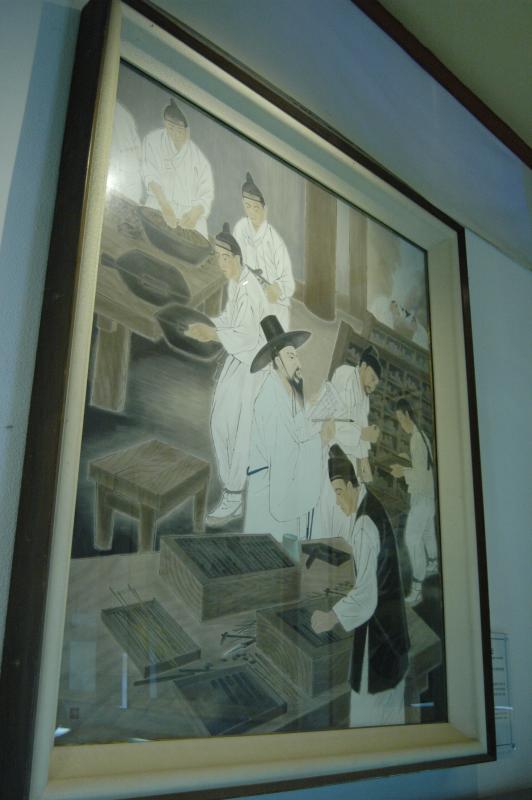 The museum is nice – after being built in 1977, it displays a number of paintings and replica weapons. The musical instruments are enjoyable, although they’re understandably kept behind glass to prevent people from playing them. One highlight is a painting demonstrating Sejong’s good ear, identifying the errant tone on a 12-stone chime (above). 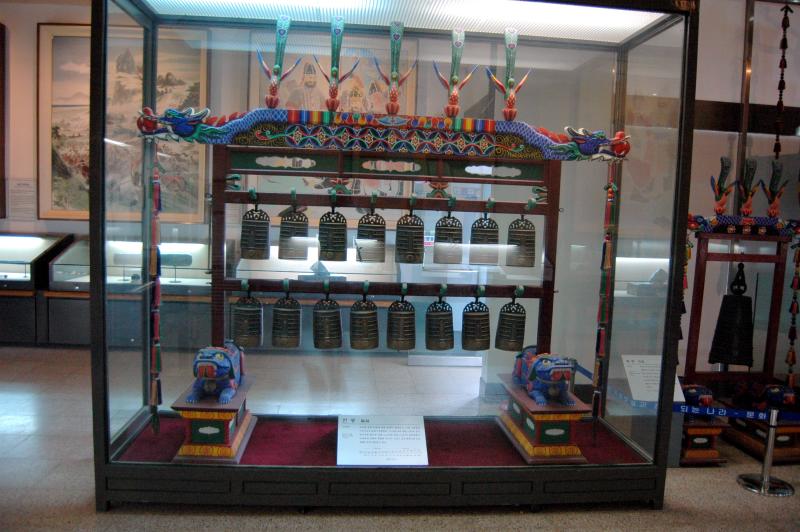 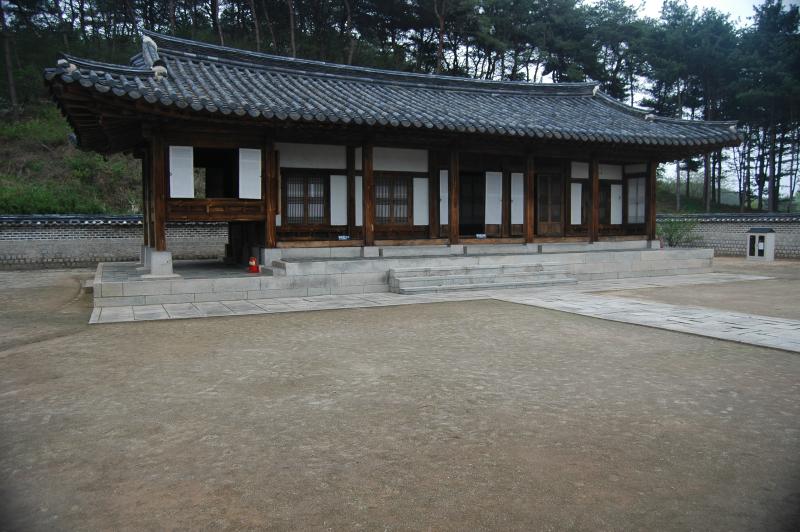 Take a quick look at the jaesil, where royal officials prepared for the memorial ceremonies. Pass through the hongsalmun, the red gate signifying the sacred area. As you might expect, the tomb itself is the main attraction.

When it comes to Joseon Dynasty tombs, the smallest details seem to have the biggest importance. Just outside the hongsalmun is a bridge called Geumcheongyo, literally ‘Forbidden River Bridge’. This bridge crosses a stream called Eogu (literally, ‘royal channel’) or Geumcheon (literally, ‘forbidden river’). According to feng shui principles, water prevents progress from fierce land energy coming from mountains. 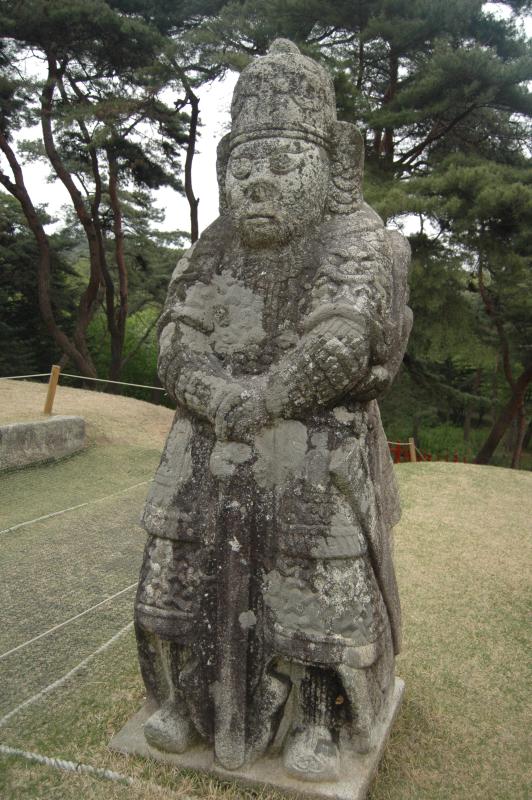 One of the many stone figures guarding the tomb. While much of this tomb is comparable to other Joseon-dynasty tombs in Korea, Sejong’s features stairs allowing for a closer view of the statues. Respect the rope, and resist the temptation to get too close – these are the real deal here. 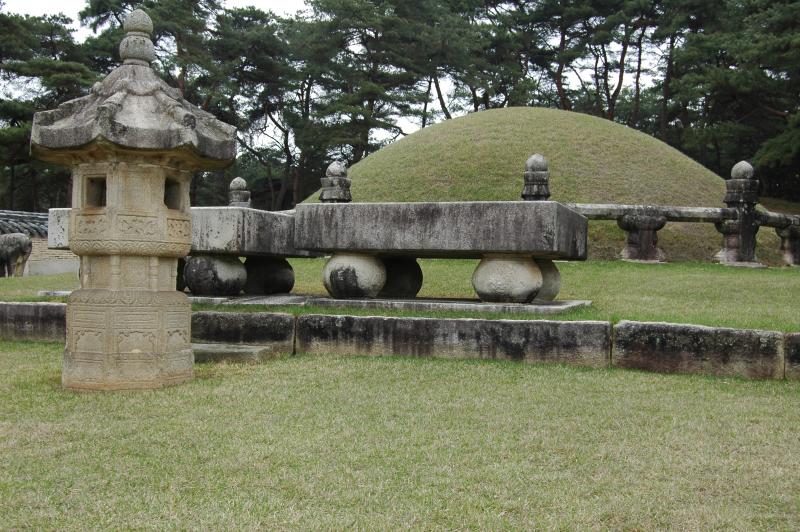 Sejong’s tomb holds both Queen Soheon, who passed away in 1446, and King Sejong, who passed away in 1450. Originally buried in Heon-reung (present-day Seocho-gu in southeast Seoul), a number of misfortunes happened after Sejong’s death, which prompted a discussion of moving the tomb. A proposal was accepted to move the tomb nearby Bukseongsan, but there was a problem – two other tombs of high-ranking government officials also existed. In pure kingly fashion, King Yejong “suggested” that the son of Yi Inson (a Third State Councillor) move his father’s tomb to make room for Sejong. While excavating his father, he found a message encouraging him to fly a kite, cut the string, and dig the tomb where the kite fell. What the Kimchi? Yi Inson’s tomb was moved 10 li (about 4 kilometers) and Sejong’s tomb was moved to Yeoju in 1469. The town ended up receiving a promotion to a city as a result. 5,000 laborers, 150 artisans, and 20 days later, the tomb was completed.

It’s a relaxing outing, and a wonderful piece of history to take in. The biggest issue comes in getting here – only three buses a day stop here from the bus terminal. It’s a bit confusing because it’s not far from the bus terminal and it seems relatively popular. My best guess is that people generally own cars, or rent them if coming from out of town. If you miss the last bus, ask the ticket office to call a taxi for you, or hike out to the main road to hail a taxi (about a 5,000 won ride back to the bus terminal).