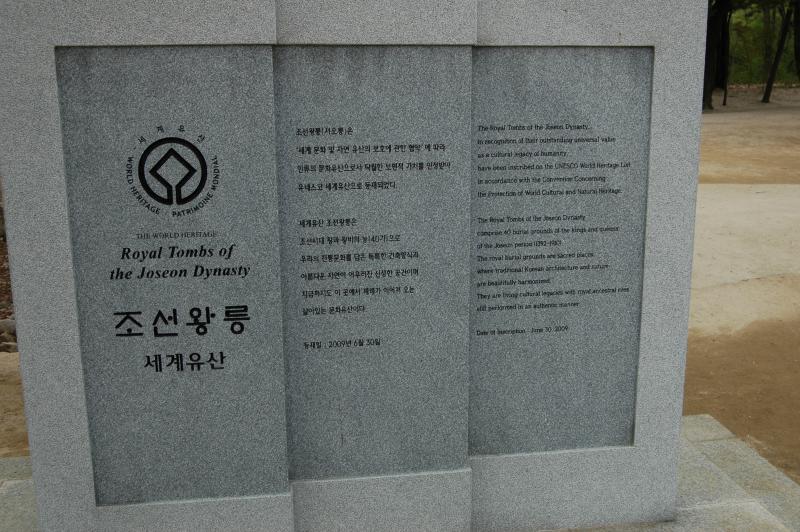 Just across the Seoul border rest some once-royal dead people. UNESCO certified as being significant to world culture, these western (서, or seo) five (오, or o) tombs (릉, reung or neung) are the original remains of Joseon-dynasty royalty. At over 1,600,000 square meters, there’s plenty of room to meander and enjoy the area – and these days there’s more than five tombs to see.

Just across the Seoul border rest some once-royal dead people. UNESCO certified as being significant to world culture, these western (서, or seo) five (오, or o) tombs (릉, reung or neung) are the original remains of Joseon-dynasty royalty. At over 1,600,000 square meters, there’s plenty of room to meander and enjoy the area – and these days there’s more than five tombs to see.

As elsewhere in Korea, these tourist-friendly tombs are proud of their recently awarded UNESCO status. Brochures have been changed, a stone monument has been added near the entrance, and some signs have been upgraded or updated. While all the tombs have English signage telling a little about the person, the tour guide is the person with more information. There’s plenty of intrigue and drama that makes for so many Korean TV shows set centuries ago. 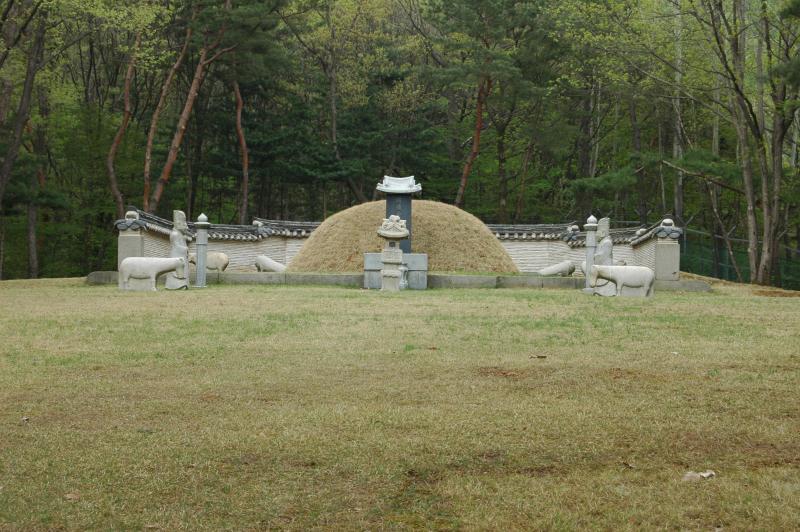 The first tomb you’ll see is Sugyeongwon – permanent home to Lady Yi, the concubine to King Yeongjo. Originally buried in Seodaemun-gu in Seoul, her tomb was moved here in 1968. 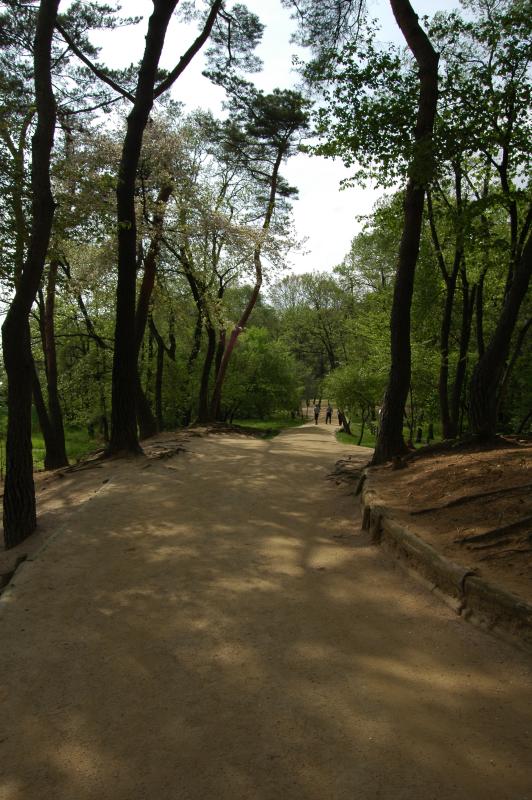 The path to see all five tombs clocks in at about 2.1 kilometers, although two additional walking trails through the relatively unspoiled area exist as well. One is just over a kilometer, while the other is just under two kilometers. Both are closed loops that rejoin other trails, so you won’t accidentally stumble into the next city over. 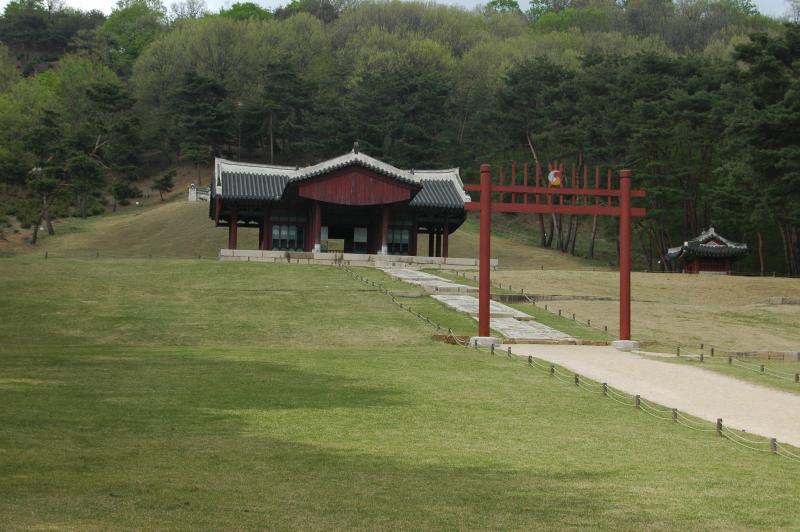 The tomb of Ingneung holds a Queen of the same name, and was the first queen of King Sukjong. At the tender age of 10 she became a Crown Princess; at 13 she became a Queen. Royalty apparently wasn’t for her, as she died at 19 years old in Gyeonghuigung. 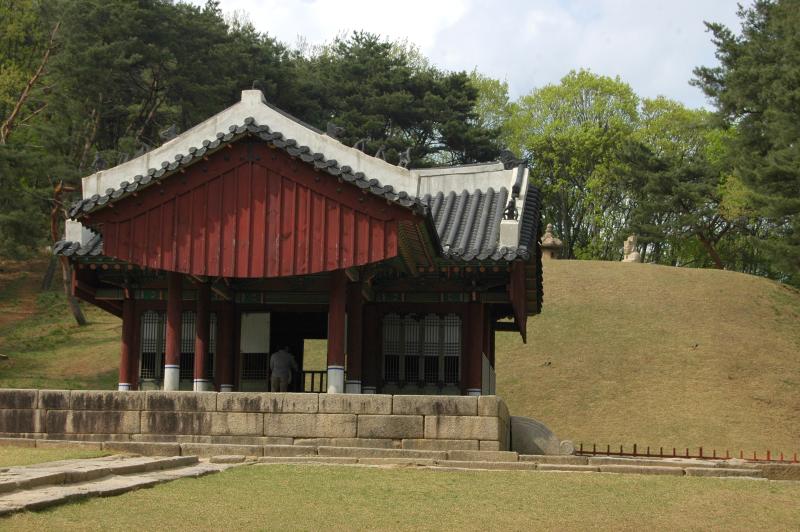 Sunchangwon holds a pair of royalty – Crown Prince Sunhoe (who died at 12 and never held the throne) and his wife, Lady Yun. As compared to those tombs of actual kings and queens, they are understandably small – but as they were royalty, are accorded a much higher status than the peasants of the time. 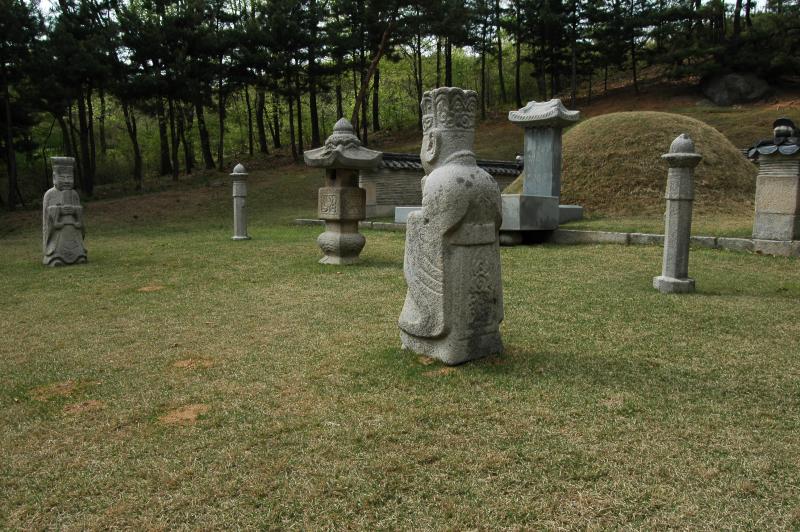 Gyeongneung holds a royal pair on two different sides. Deokjong, the eldest son of King Tejo, and Queen Sohye. Deokjong became a Crown Prince when his father received the throne, and fathered a son that eventually ascended the throne. That son, Seongjong, gave his father the posthumous title of Deokjong and his mother the posthumous title of Queen Sohye. After his death in 1457, Deokjong’s tomb was the first buried in this area. 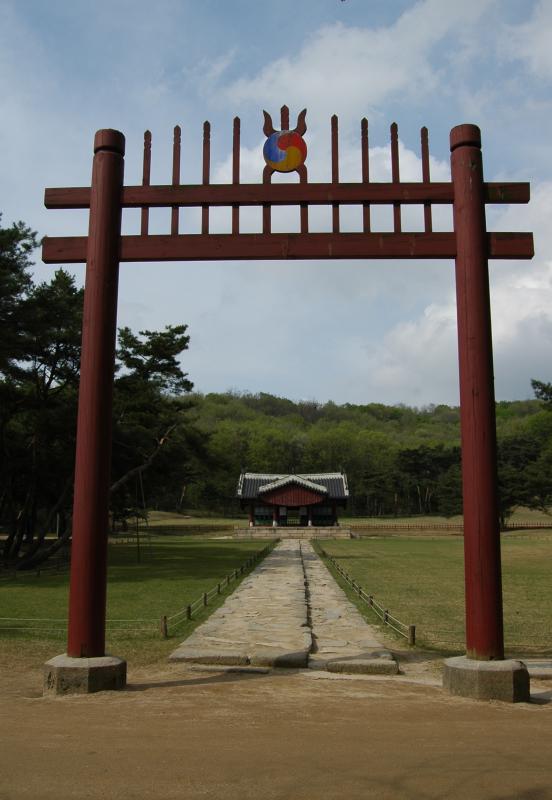 Daebinmyo holds an intriguing story of royal backstabbing. Jang Soui (?-1701) started off as a concubine to King Sukjong. Sukjong’s Queen Inhyeon failed to produce a son (like it’s her fault), so this lady-in-waiting helped him out. In 1688, Prince Yun was born. After Yun was made a Crown Prince, Jang Soui received a promotion to Royal Concubine. King Sukjong went so far as to remove Queen Inhyeon from her position, electing to make Jang Soui his Queen. Later on, he regretted this move, and poisoned Jang to kill her. Nothing says ‘I love you, come back’ like poisoning the competition. The tomb was moved here from the city of Gwangju, Gyeonggi-do in June of 1969. 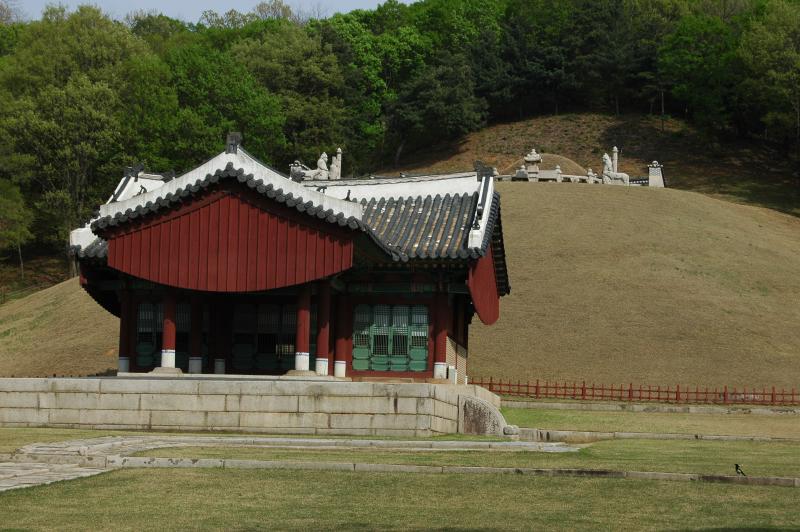 Hongneung is the tomb of Queen Jeongseong. Unlike other queens, she didn’t become a queen in her teenage years – rather, the ripe age of 32 years old, when King Yeongjo ascended to the throne. After being a diligent and humble queen for 34 years, she passed away childless in Changdeokgung. The king actually saved a space of real estate right next to her, but the politics changed against him. King Yeongjo is currently buried with his second queen in Dongguneung, another cluster of tombs east of Seoul. 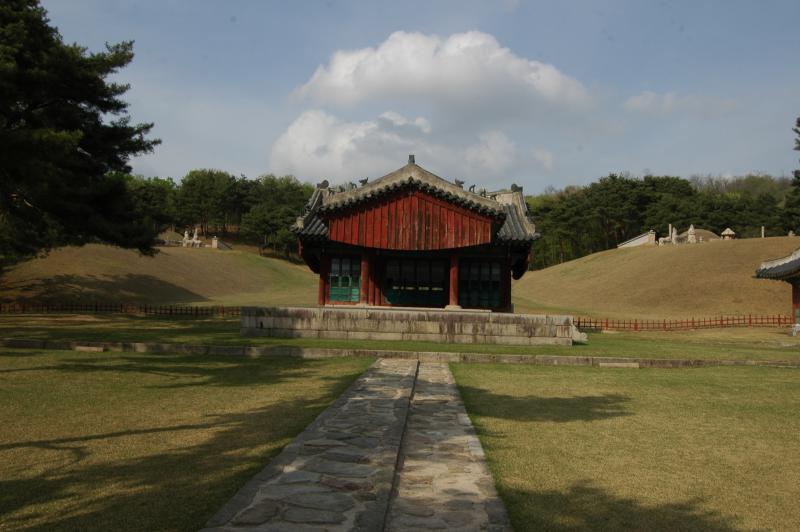 Changneung holds one of the older royal couples. King Yejong became Crown Prince at seven years old, but had to wait until he was 18 to become King. After being King for 13 months, he passed away. Queen Ansun, however, lived on for three more decades as a queen, passing away in 1498.

While the Joseon Dynasty tombs are very similar-looking, the stories of the royalty buried inside are what draws people to them. Bring a picnic if you want to enjoy the pleasant area, and allow at least two hours for a good visit; more if you pack a picnic. Wear good walking shoes – the walk is not hard or strenuous, but this is not the place to break in new shoes.

Directions to Seooreung: take line 3 of the Seoul subway system to the Nokbeon station. Take exit 4 to street level, then walk to the SECOND bus stop and transfer to 702A or 9701. 702B will NOT get you there. Get off at the Seooreung stop (서오릉입구 – Seooreung ipgu, or entrance). Take the first right and walk about 100 meters, passing several restaurants along the way. Bear right, then look up for the wall and signs. 1,000 won admission. Open 6am-6:30pm March-October, 6:30am-5:30pm November-February (last ticket sales one hour before closing time).