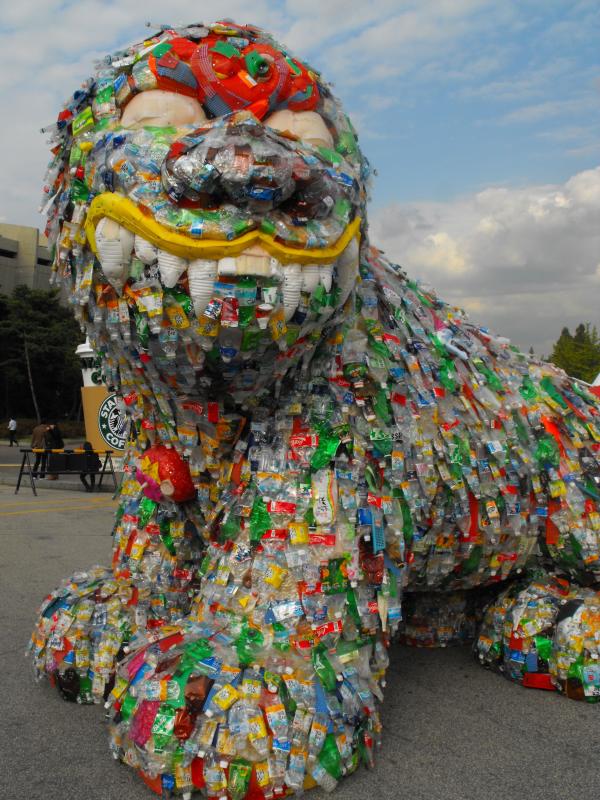 After last year’s interesting exhibitions, the Seoul Design Olympiad is back for another year. Going through the 9th through the 29th of October, you’ll have plenty of time – and two more weekends – to check it out. Despite the brouhaha about the name, this year’s entrance is sponsored by the Haechi – that lovable mythical creature that Seoul is using as their new trademark. Although the exhibition above consists of flattened plastic bottles – I can’t make this up – it’s certainly one of the more interesting displays. That’s saying something, considering there’s a conference, exhibition, competition, and festival all happening around the area.

Get your drinks, snacks, and souvenirs before walking in – there’s few other places to grab them once you’re inside. Pass by the heat-sensing camera (thanks H1N1 / swine flu) and take a look at the view: 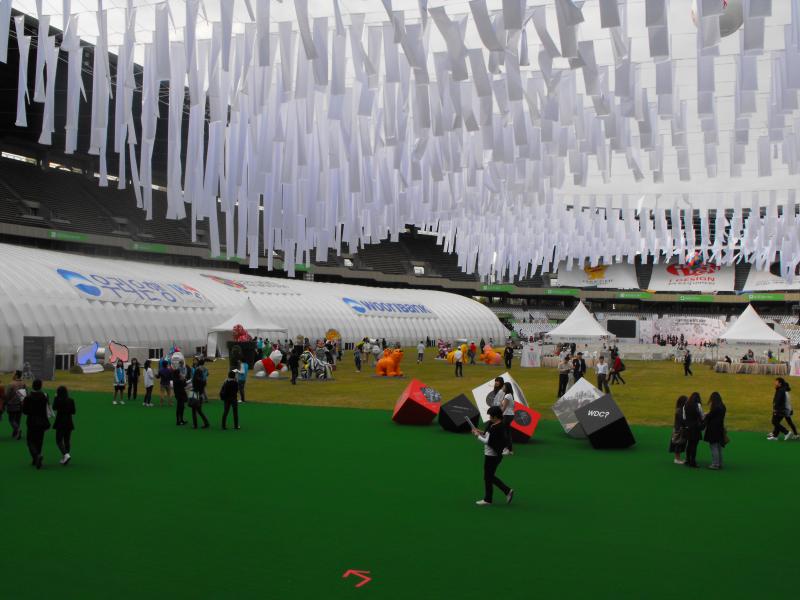 Inside Jamsil Sports Complex – the track and field stadium used during the 1988 Olympics, and within a stone’s throw of the nearby baseball stadium. Peek back into the ring surrounding the field to see some of the early designs: 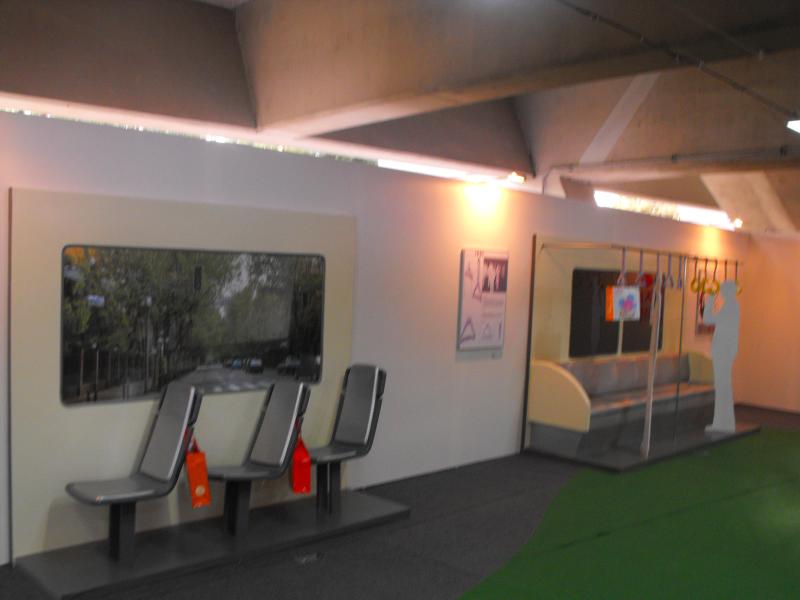 If you consider that design is a fusion of art and function, consider these two exhibits, under the title ‘Women-Friendly Seoul’ – each featuring handles for one’s shopping bags. Handy, maybe – but perhaps a little annoying on a crowded bus or subway car?

The large map from the friendly counter gave a few different options on what to see, depending on your interests and how much time you had. I opted for the longest route to try and see it all – there were a few shorter routes mentioned, but the natural place to start is one of the long silver tubes. As you enter the tube on the left from the main entrance, the first stop is a gallery called ‘Oldish Romantic Market’: 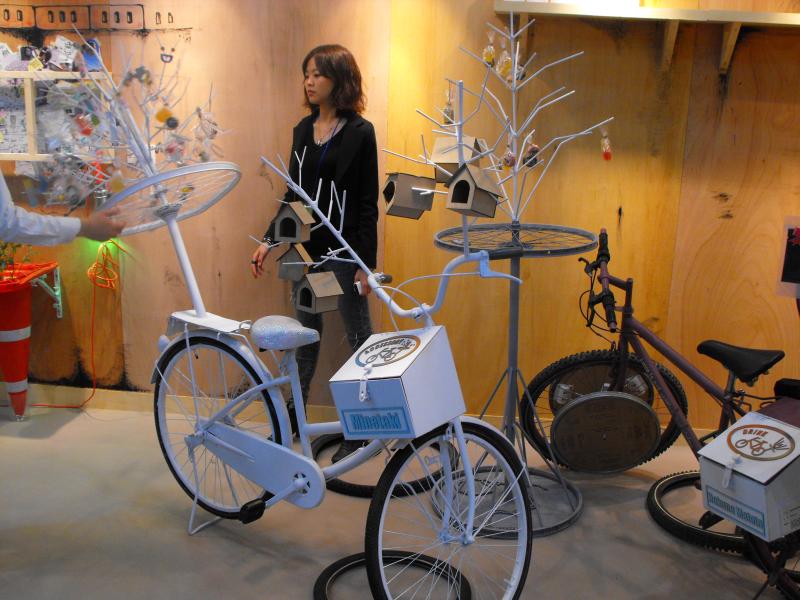 Um, yeah, not sure what to make of this – it looks functional enough, but the wheel hanging from the back would probably move around too much. 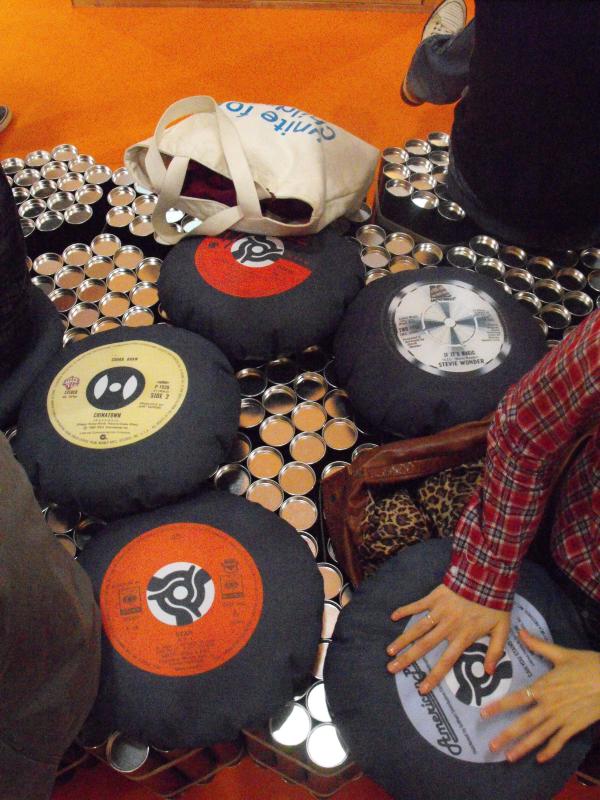 Seat cushions in the shape of records – those old black vinyl things that contained music.

Within one football-field-sized silver tube were several different areas, some focused on exhibition and others focused on selling stuff. Each section has a fairly grand-sounding name (the World Design Market, the Seoul Designers’ Mart, the Design Supply Mart), but you can easily figure out what’s for sale and what’s for seeing. 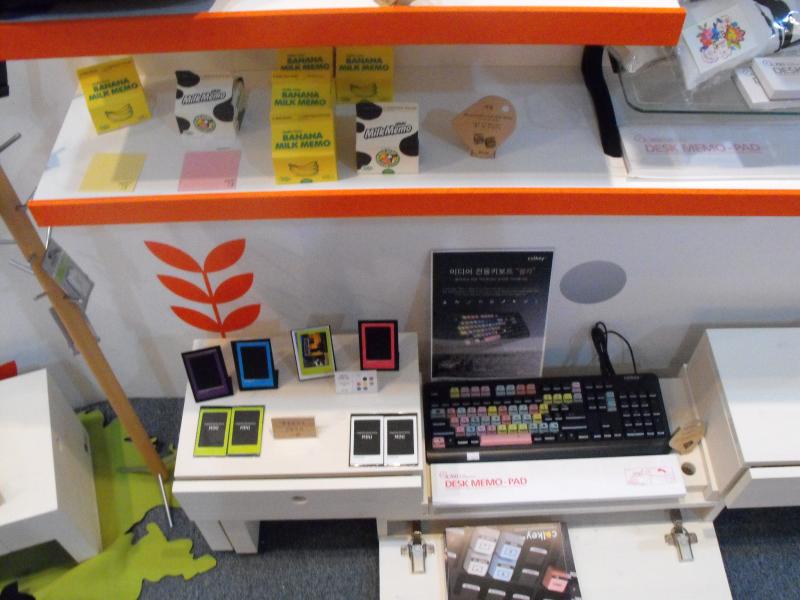 While some design stuff is great for cutesy purposes, some, like the keyboard for Photoshop or other photo-editing purposes, serve a more practical purpose. 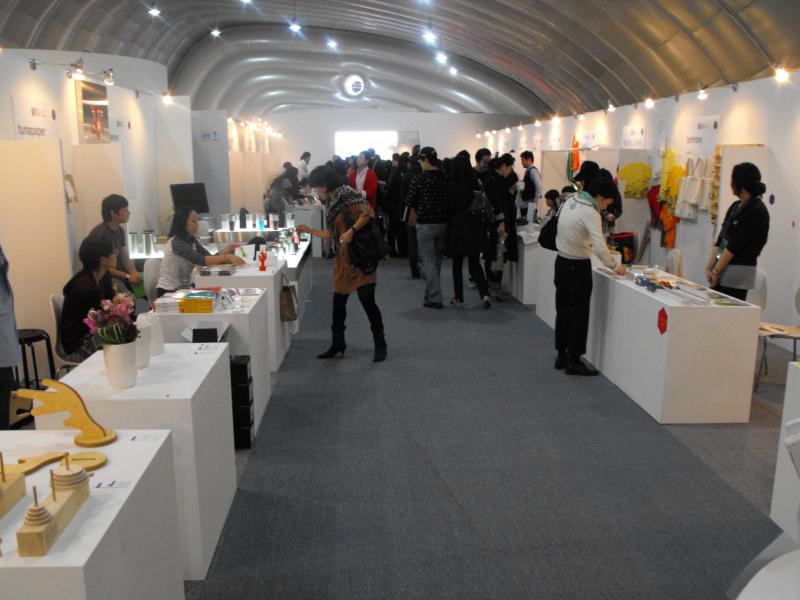 A great chance to meet and talk to a few amateur designers – only a couple of which were non-Koreans. What impressed me most was the professional packaging and design of a product, even if created by companies still newly in business. 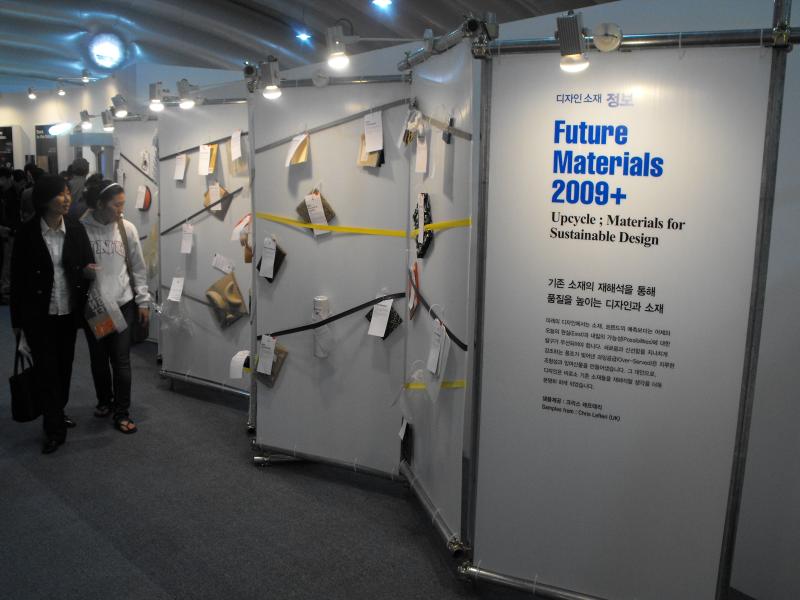 Another gallery of sorts – this time with more of a ‘touch and feel’ sort of opportunity. An exhibit from England shows off dozens of different recycled materials – all useable in industrial or commerical products. While I’ve heard of a few, most are presumably used behind the scenes or without much fanfare. Not pictured is a fairly stiff fabric using fiberoptic fibers in it. 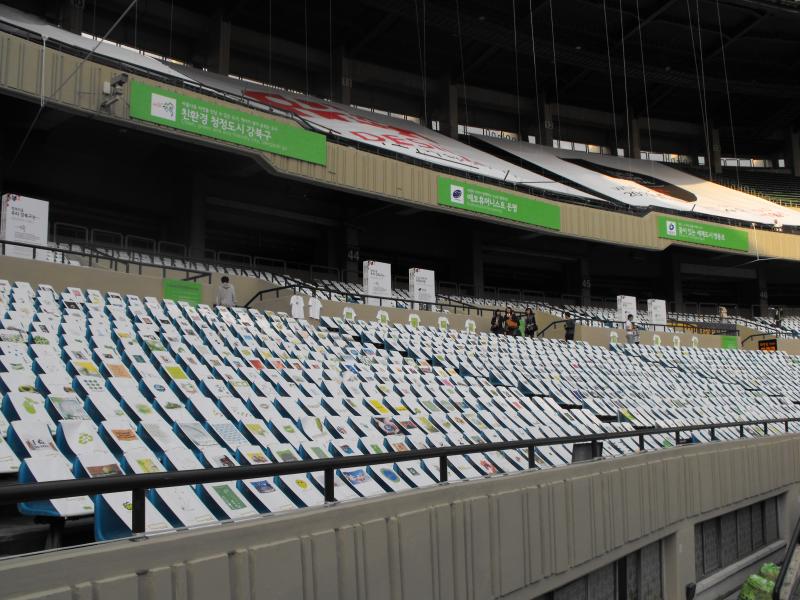 Back outside and taking a look around – many of the tens of thousands of seats in the lower level have a card or something within their section. Each of Seoul’s 25 gu, or district, had a section to decorate on their own environmental or green themes. Each of the white cards you see holds a different design, for what it’s worth. 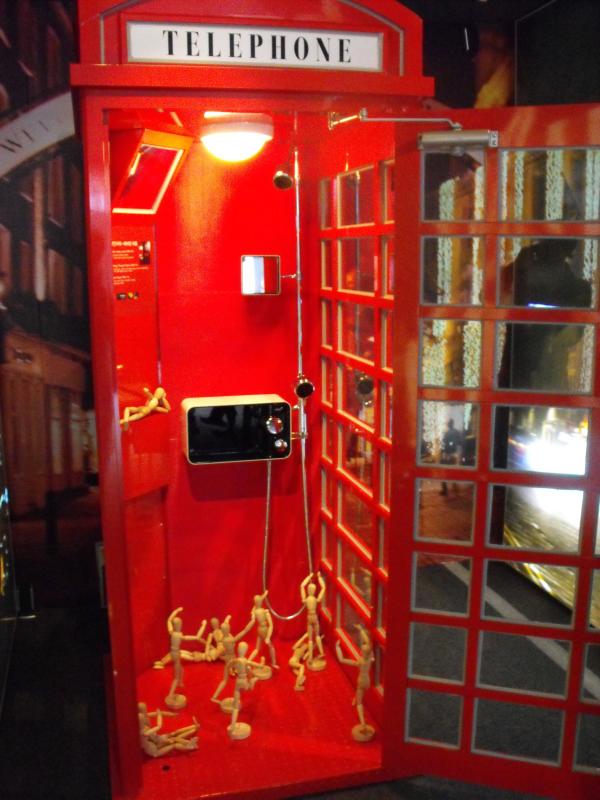 A shower within a telephone booth? Suurre, why not? While just for display only, this display of design did win some design contests for the presenters.

Entering the second silver tube across the field – the first area being an exhibition of awards given by INDEX. The area is split up into five sections, representing five different ways of improving life through better design (Body, Home, Work, Play, Community). 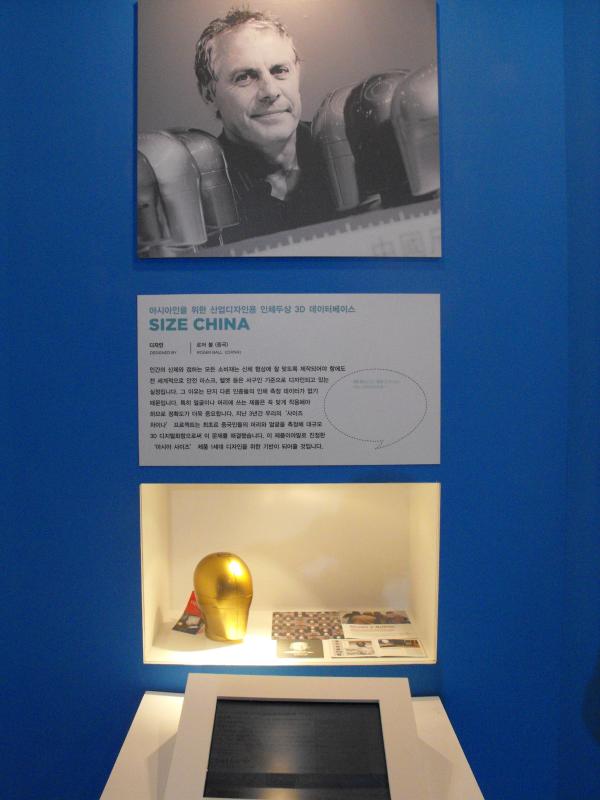 Unfortunately, displays only offered text descriptions in Korean. While some exhibits showed articles or other publications of their business in English, most were a little tough to figure out without some help. 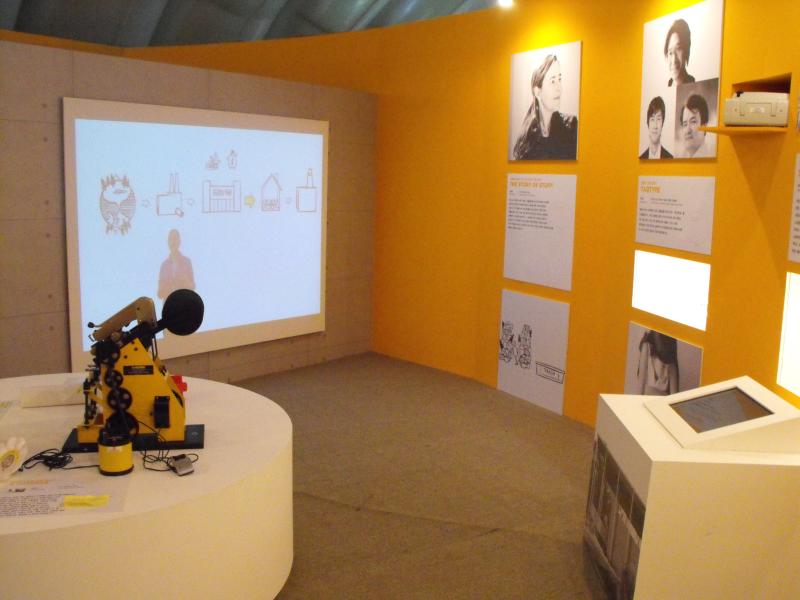 The term ‘design’ in the Work section can be taken to include a video submission and a book (not pictured). 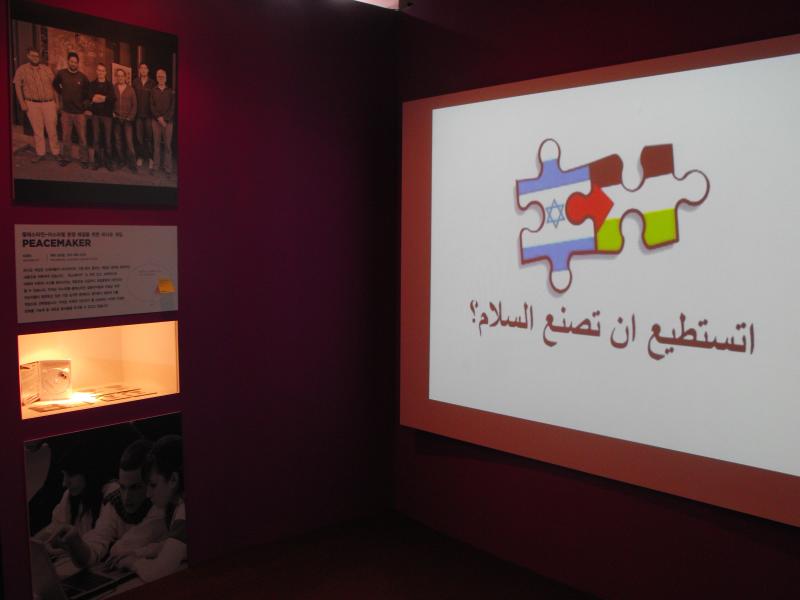 It also includes computer games, as in the case above (a computer game called Peacemaker offers us the above video loop).

A little while later, the highlight of the tube (and the exhibition) presented itself: 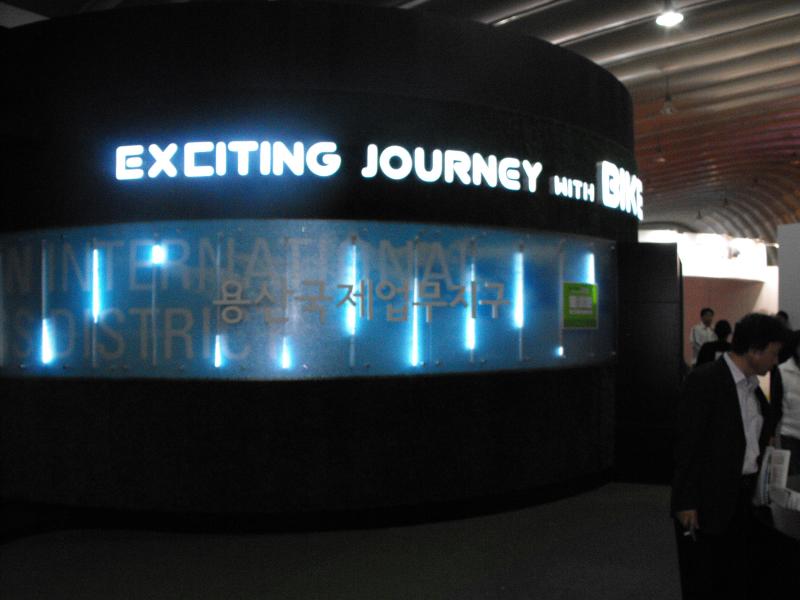 A 4-D ‘biking experience’ – put on some glasses and strap yourselves in. While only 5 of the 15 viewers actually get to pedal the sitting bikes, the strangely helicopter-like ride is great. If you get to pedal, strap in tight – it’ll throw you around. 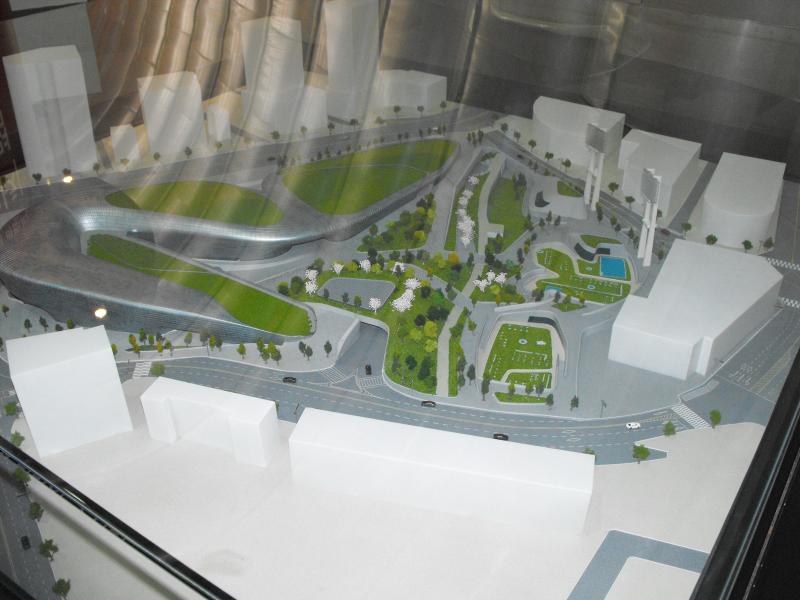 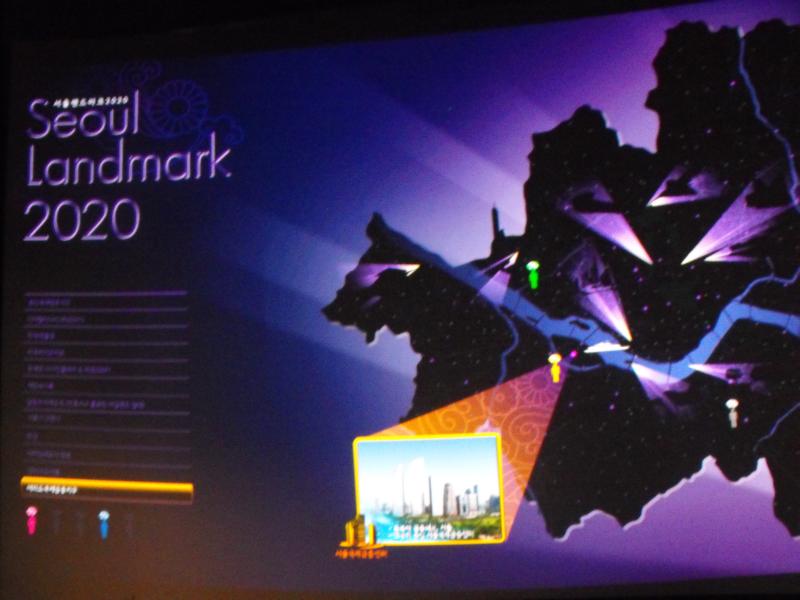 A chance to learn more about Seoul’s grand plans to bring all the buildings currently being planned / developed to completion by 2020. The Seoul of 11 years from now will certainly look a lot different than it does now – for most foreigners, however, bear in mind that the future Seoul can only be seen in Korean.

The final area offers a view of cultural design in everyday life: 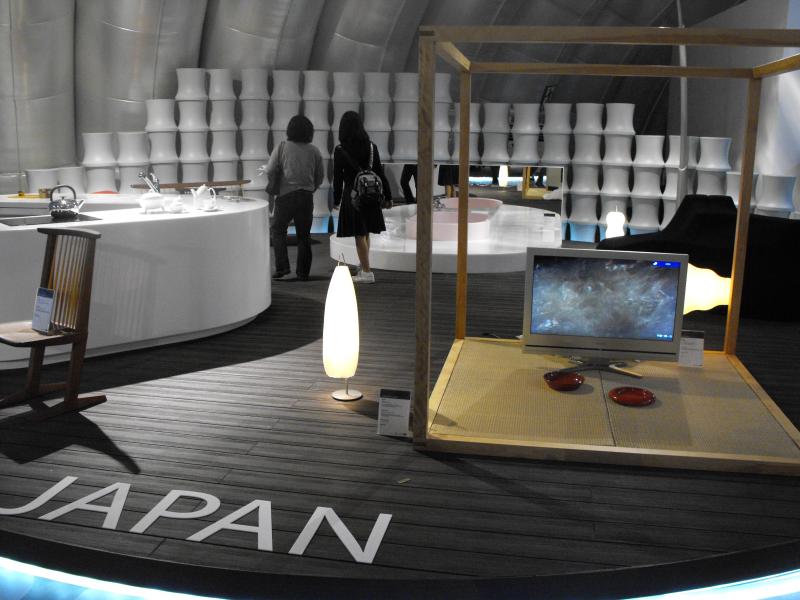 Consisting of galleries from Japan, Korea, and China, there’s plenty of design to be seen. It’s a shame that you can’t see things up close and personal – the ‘keep off’ signs kept people off the wooden platform.

From here, the tour takes a turn into and around the stadium’s inside. First exhibition up: Architecture, a Users Manual. 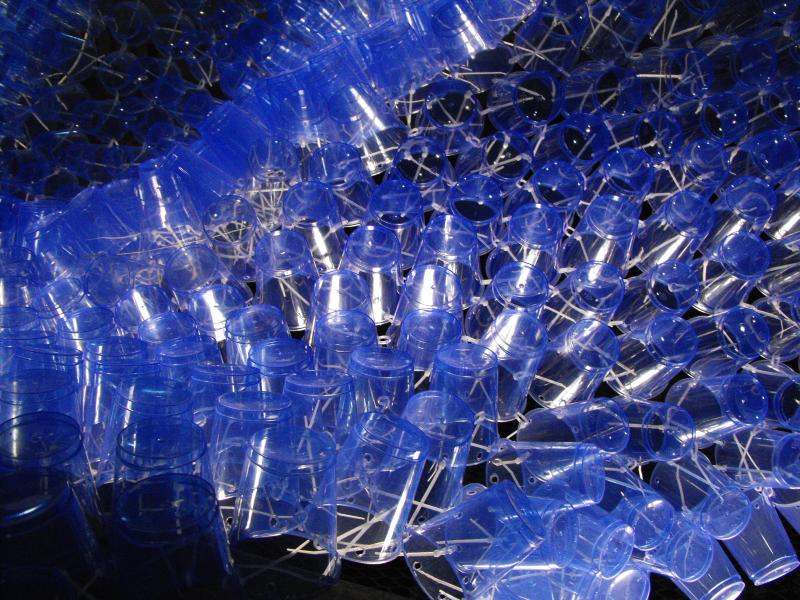 Most of the ‘architectural’ pieces felt more like installation art, but they all challenge your current ways of thought through – you guessed it – design. Entitled ‘Cupscape’ by Chun Eui Young, the cup-and-string construction hung from the roof perhaps 10 meters from the ground.

The next section is an area offering ‘World Design Cultures’ – a chance to see nine different cultures view of design. While a few simply had galleries for display, others offered quite a bit for sale: 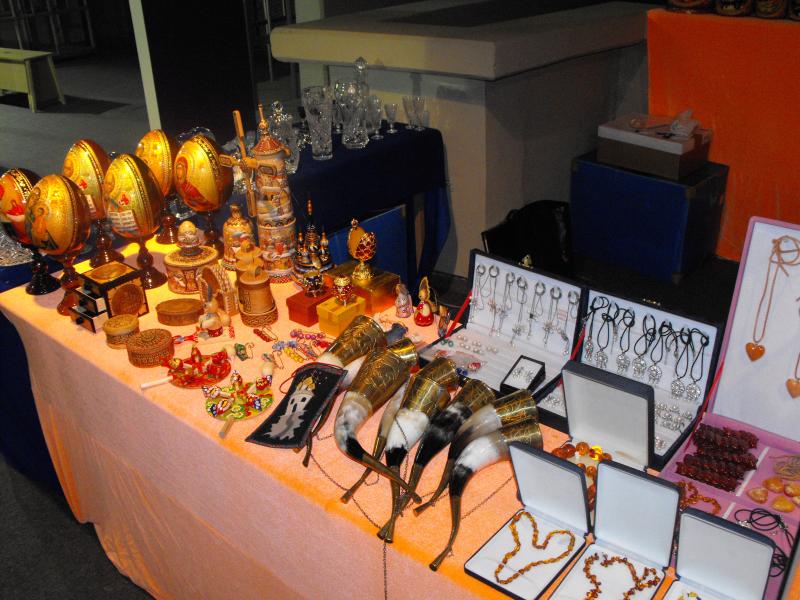 Russia – everything from the nesting eggs to the rams horns. 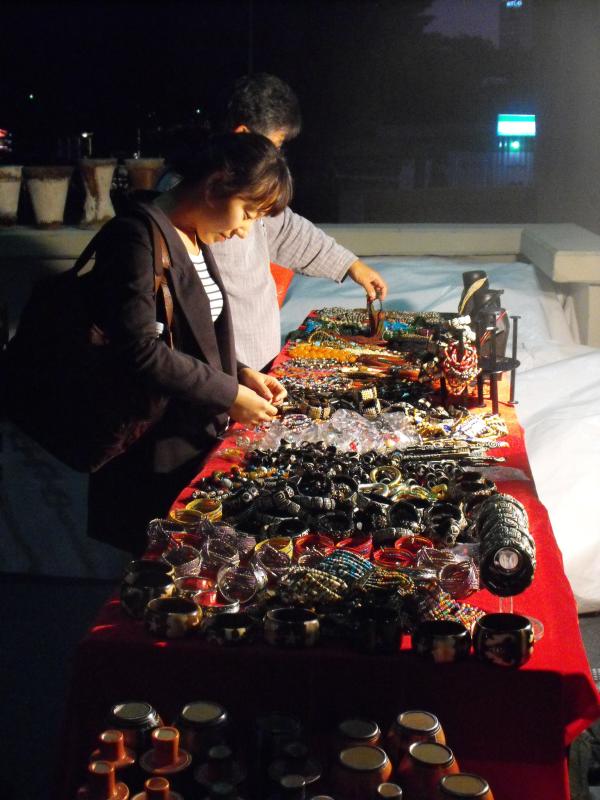 It’s a bit dark in here – which might possibly explain the lack of people around. If you persevere, you’ll be rewarded with a chance to buy some various souvenirs from Africa.

A few other sections are also around, including (but not pictured) the Korea Package Design Award. Yes, really. I’m waiting for you to stop laughing. Can we move on now? Thank you. 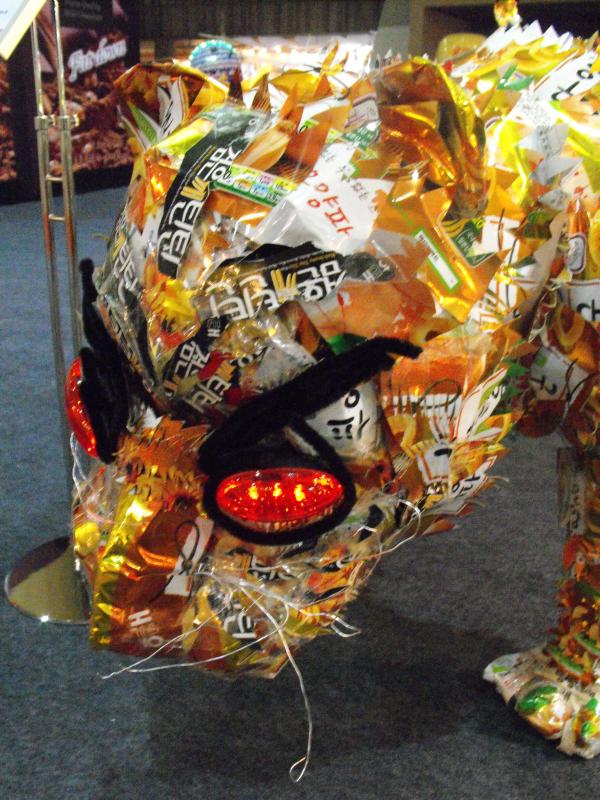 Yep, this animal’s made of ramen wrappers. Definitely an odd mosaic, but by now you’ve gotten used to seeing odd things.

The last section of the day before calling it a completed circle: the winners of the design contest: 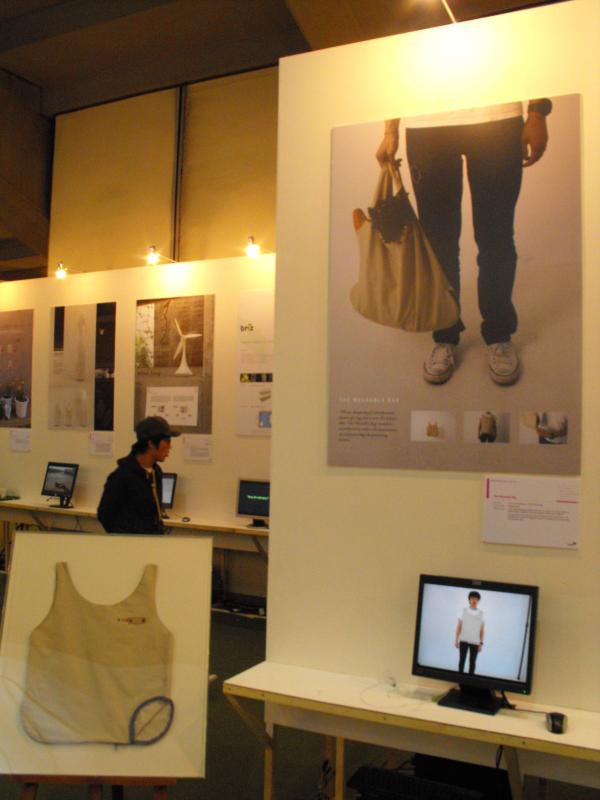 Combining both practical and possibly artistic, the t-shirt that doubles as a bag would definitely be something I’d buy. 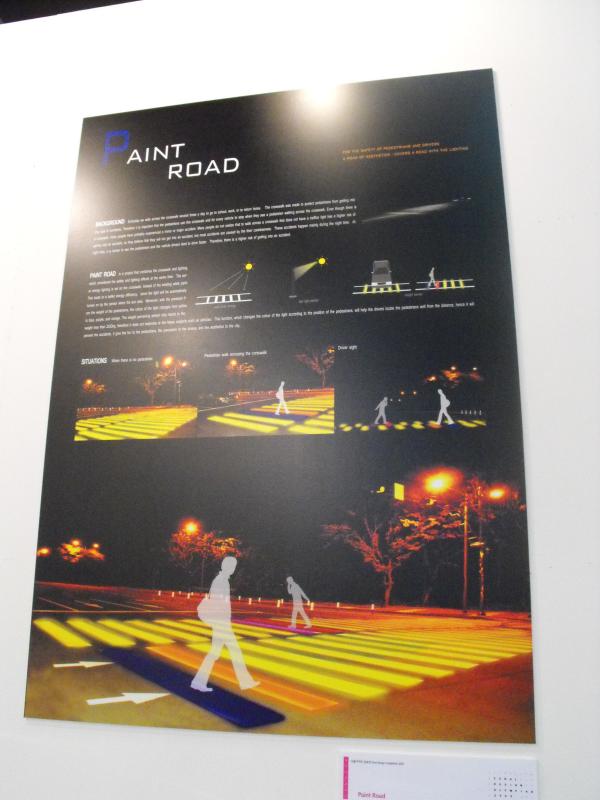 Like several other winners, ‘Paint Road’ combines two devices or ideas and merges them into something new. The concept of a crosswalk lighting up as it’s stepped on is certainly novel – and might cut down on Korea’s pedestrian vs. car problems (or at least a few excuses). 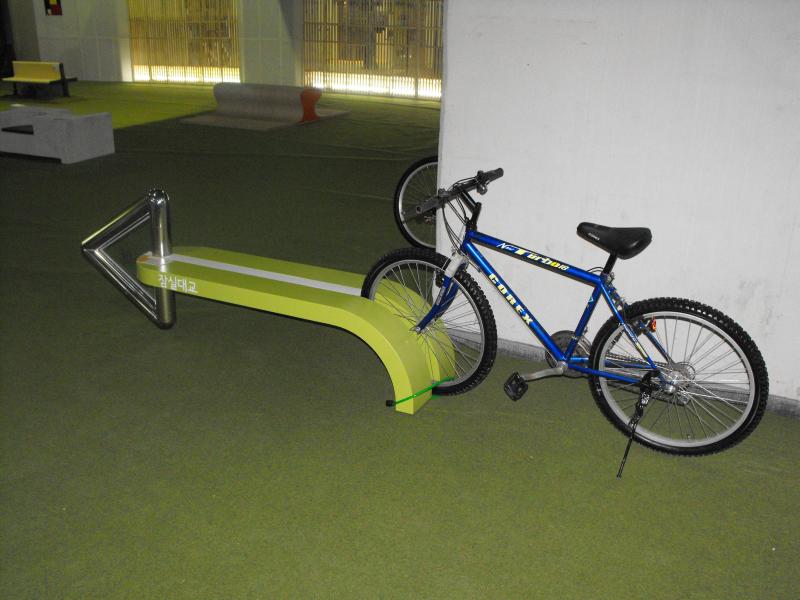 One interesting competition – the bench competition. Yes, people design them to serve a creative process as well as a practical one. This one offers a secure place to lock your bike and get some rest at the same time. While ‘short list’, ‘bronze prizes’, and ‘silver prizes’ have been awarded, I never found the gold prize(s) amongst the twenty or so around.

Expect the Seoul Design Olympiad to take a full day of walking, enjoying, and sometimes puzzling over a few exhibits. If there’s a creative bone in your body, consider this event a place to be inspired. Art meets function in many ways, some more practical than others – but mostly interesting to see.

Quantity of things to see: