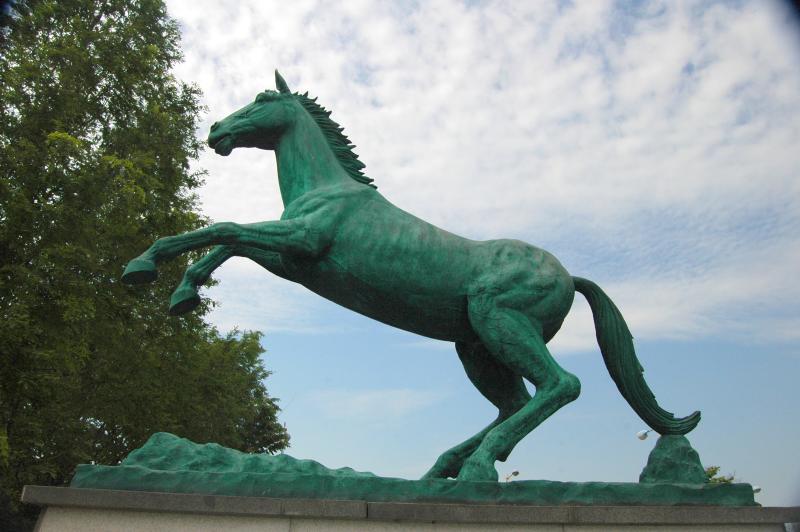 Whether you’re a seasoned bettor or just coming out to watch, Seoul Racecourse Park has a little bit of something for everyone. The park itself focuses on the racecourse, but the infield offers enough room for things that have nothing to do with horses. Even with a race going on around you, you’re not likely to see much of it because of everything else around.

Whether you’re a seasoned bettor or just coming out to watch, Seoul Racecourse Park has a little bit of something for everyone. The park itself focuses on the racecourse, but the infield offers enough room for things that have nothing to do with horses. Even with a race going on around you, you’re not likely to see much of it because of everything else around.

The history of Korean horse racing clubs dates back to 1922, when the Chosun racing club was first established. The Sinseol-dong racecourse (where the Seoul Folk Flea Market currently resides) was moved to the Ttukseom area in 1954. When Seoul was awarded the 1988 Summer Olypmics, a new site needed to be constructed for the games; after the Olympics, the Korean Racing Authority began work to make it into a racecourse. A Jeju racecourse opened in 1991, and one in Busan opened in 2005. While these other two venues haven’t appeared on my radar, I may have to check them out next time I’m in the area.

If you’re looking for some betting action:

Step 1: Get into the park – An 800 won admission fee gets you into the park, the grandstand, and the rest of the grounds. There’s plenty to see whether you’re interested in the racing or not. 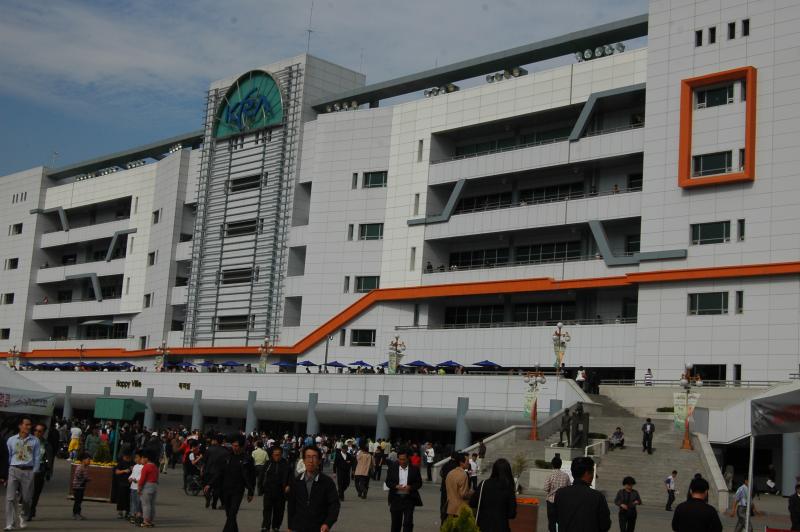 For most people looking to wager some money, this is the place to start – although you’ll already have seen a few screens like these: 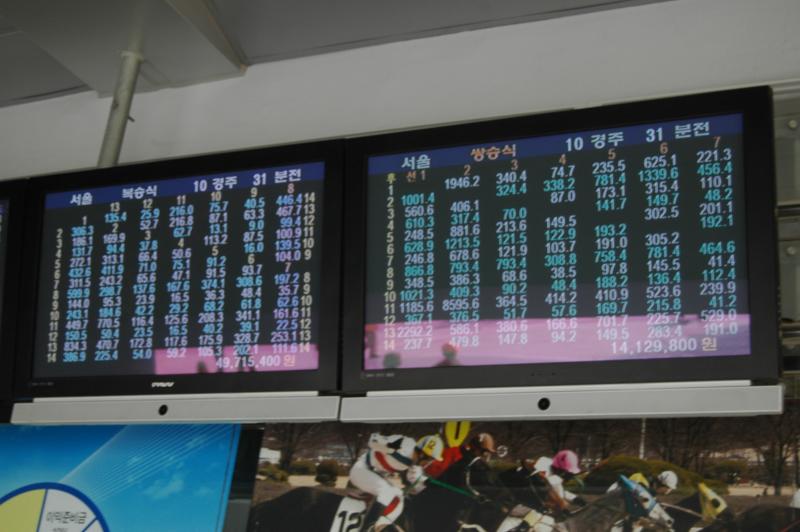 Those are odds you’re looking at – if it looks like Greek, I feel your pain. Surely basic bets don’t require a Master’s in Statistics, right? It should be noted that odds are not shown as “5:2” or “10:3”. This is Korea, home of precisely followed schedules and computers. All bets assume a bet of 1 – thus what you might know as “5 to 2” is simply reduced to 2.5; “10 to 3” is reduced to 3.3. The screens cycle through several types of odds – the ones above show Quinella odds for two given races at two different racetracks. In the upper-right-hand corner, 10 경주 means it’s the 10th race of the day, while 31 분전 means there are 31 minutes until betting closes. The race starts just after that. 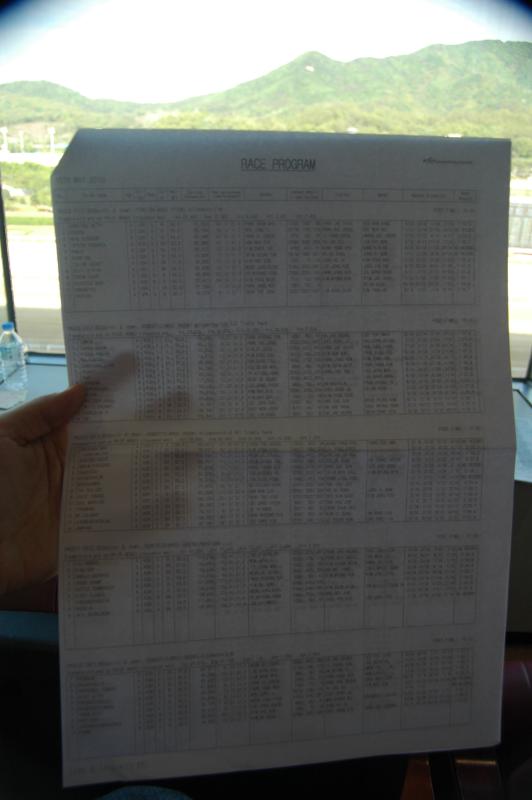 Step 2: Head up to the fourth floor. That’s where you’ll find a lounge that’s open to foreigners. While it’s no longer just for foreigners, it’s a comfortable room with a nice view. Ask for a racing guide from the staff. You can receive an English-language printout of the horses racing that day (above) and an English-language brochure explaining how to bet. While it’s a fraction of the information available to locals, it’ll be more than enough for you statisticians to crunch. Between these stats and the ever-changing odds, there’s almost too much to keep track of. Just remember, the horses don’t know the odds. 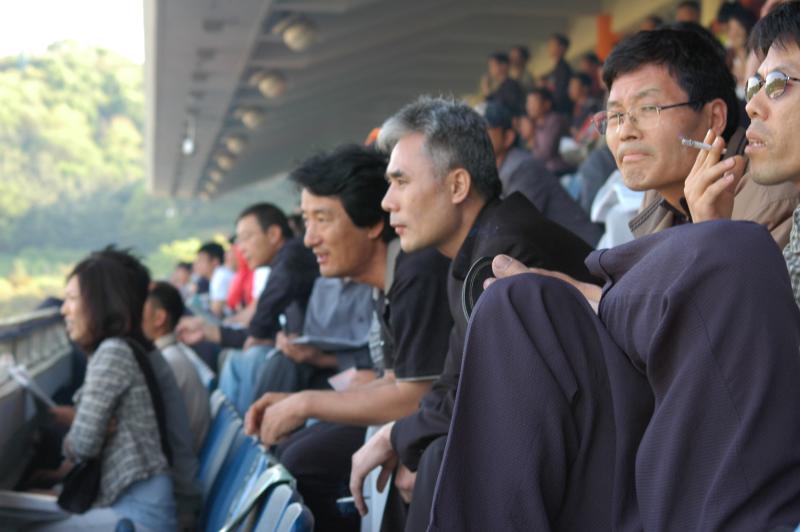 The older male demographic is well-represented in the stands. While a few older women were around placing bets, younger people were few and far between.

Step 3: Obtain a betting slip – boxes of them are affixed to every pillar and wall at eye level. Get a couple just in case you change your mind, or want to bet on more than one race.

Step 4: Fill it out – here’s the trickiest part. It’s a ‘bubble-in’ sort of grid not unlike a standardized test, and will be read by a computer as such. The first row of boxes asks for the location – it’ll always be Seoul, unless you manage to find your way to the Busan or Jeju tracks. The second section indicates the type of bet – to win, to place (1st thru 3rd on races with more than 8 horses), or a number of more exotic bets like Quinella, Exacta, or Trio. From there, bubble in the horse or horses you’re betting on (more than one bet per slip is possible). Finally, choose a betting amount – from 100 won to 100,000 won per bet. 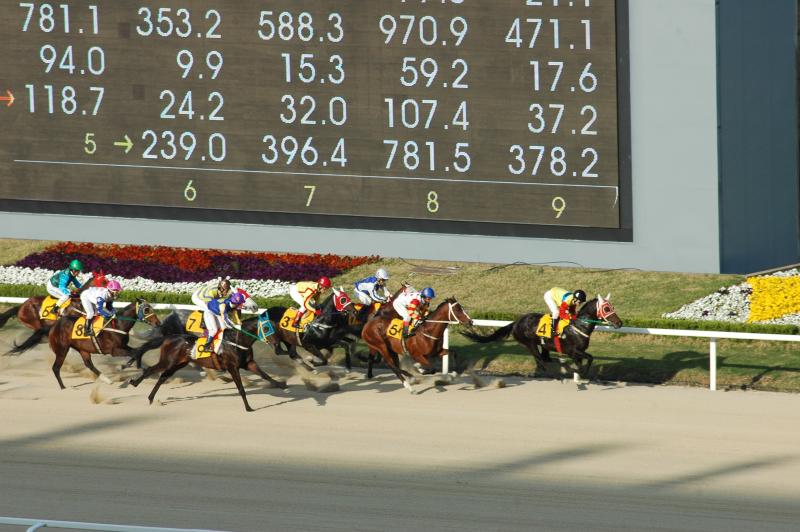 Step 5: Make your bet. On the 1st, 2nd, or 3rd floors there are plenty of humans to take your money and betting slip. On the 4th floor the humans are around to give you a voucher. This is how the machine knows how much money you’re betting. Go to a window staffed by a human and hand over some money. Either way you’ll receive a white receipt showing your bet.

Step 5a (if using a machine): Insert your money voucher (arrows first), then insert your betting slip (arrows first). Note that the amounts on the two slips have to match – if your voucher is for 10,000 won and you’re only making a 5,000 won bet it’ll report an error. The machine reads the papers, then shows a confirmation of your bet. Hit the green button to receive your bet receipt, then head back to your seat. 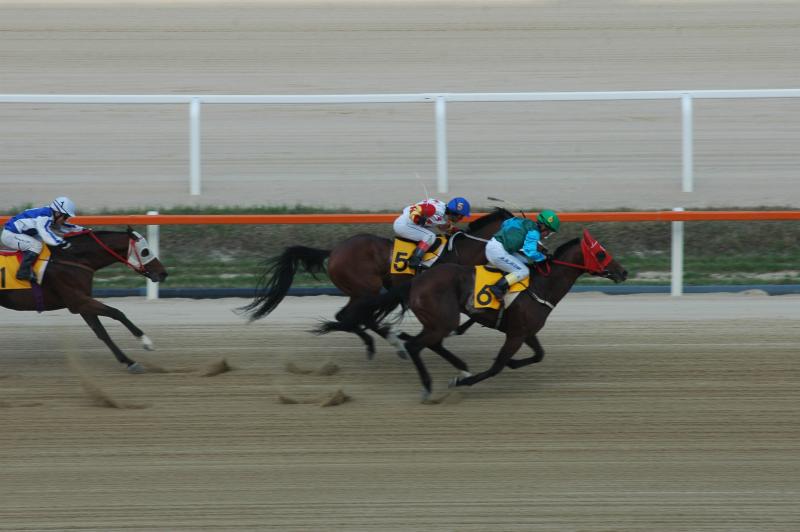 Step 6: Win. Celebrate. If you lose, go back to step 3 and try again – you’ll have time before the next race.

Step 7: Collect your winnings – head back to the window with a human and present your winning ticket(s). After the tickets are scanned the cashier will pay you (the odds are frozen just before the race begins). 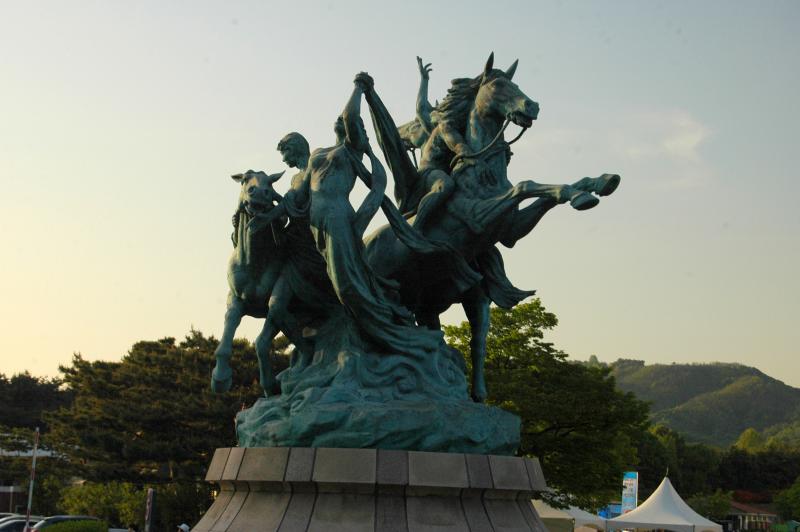 While it’s a worthwhile day, you have to choose between paying enough attention to bet and seeing the park. There’s enough park to see that it could easily take up your whole day, while getting the hang of placing a bet can take a couple tries. If you show up early enough (first race is usually around 11:00-11:30am), you can get in a few races and see the park in one day. Not counting any night races, you’ll be leaving the area around 7pm with plenty of time to get some dinner or go elsewhere. Check out the park if you’re on a date; check out the horses if by yourself.

Directions to Seoul Racecourse Park: Take line 4 of the Seoul subway system to the Seoul Racecourse Park station. Take exits 1, 2, 3, or 4 to street level. It’s essentially the only thing around, so follow the crowd. Admission: 800 won; first race is usually around 11am and last race is usually around 6pm. Races are on Saturdays and Sundays only. The infield closes after the last race, so enjoy the park during the afternoon before the races end. July and August offers some night racing; for more information, check out a blog about Horse Racing in Korea.