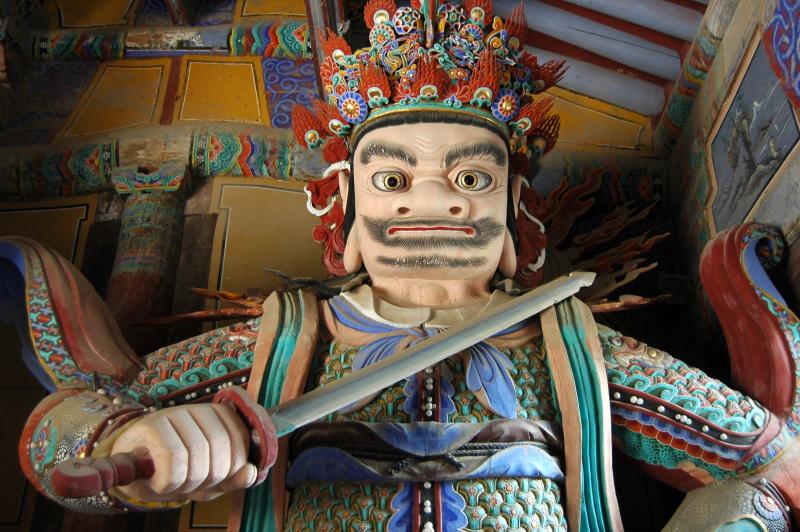 Above: 증장천왕 (Jeungjang cheonwang), or the deva of the south gate, guarding with a dragon.

Above: 증장천왕 (Jeungjang cheonwang), or the deva of the south gate, guarding with a dragon.

Author’s note: a big shout-out and thank you to Sherwin from gyeongjublog.com for showing the Lady in Red and I around. Another shout-out of appreciation goes to Dr. David Mason, an expert on sanshin and professor of Korean tourism at Kyung-Hee University, for adding some details not found on the temple’s grounds.

Considered one of the three sambo, or three treasures within Korean Buddhism, Tongdosa (통도사, 通度寺) is famed for holding the sarira (사리라 or 舍利) of Buddha himself. This is as close to a relic of the Buddha as you can get. It’s buried under tons of stone and dirt, so there’s no chance of looking at it directly. Whether you believe there’s a genuine relic of the Buddha or not, there’s still plenty to see – and plenty to merit make a special trip out.

Turn the time machine back to 638 A.D. to start our story. Jajang-yulsa, a Buddhist monk and Vinaya master, was practicing asceticism during a trip to China. While there, he received a bone and surplice (a ceremonial robe) of Buddha’s from Munsu-bosal, the bodhisattva of wisdom. (Wikipedia says Jajang also brought back a begging bowl.) After returning to present-day Youngchuk mountain, he had the relics enshrined at Hwangryong-sa, a nine-story wooden pagoda, and Geumgang-gyedan at Tongdosa in 648 A.D.. Since there is (supposedly) a real part of the Buddha here, it’s the only temple in Korea that doesn’t have a Buddhist image in the main building – the representative Buddhist altar is engraved in the main building. 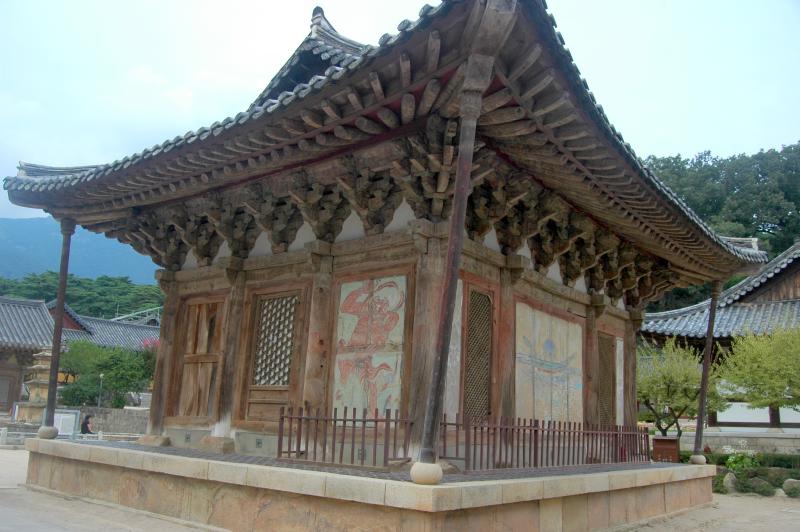 There’s plenty of history these walls have seen – especially the walls of 긍낙전 (Geungnakjeon). Built to house the Amitabha Buddha, it was originally constructed in 1369, towards the end of the Goryeo dynasty. This building is positioned to the west to make worshippers face that direction. Being the eternal tranquility of paradise, it’s the second most common shrine in Buddhist temples, next to the main hall itself. As with many other Buddhist temples and buildings, Geungnakjeon has been reconstructed several times. The structure you see above dates back to the early 1700’s, which explains the paint job. 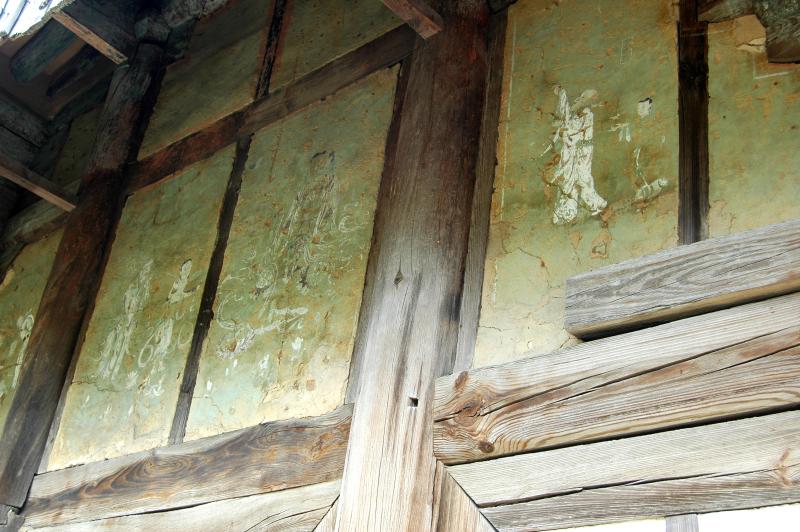 The outer wall of 영산전 (Yeongsanjeon) – the shortened name for the mountain where Sakyamuni Buddha resided and taught for the longest period of time. Worshiping here has the same effiency as meeting the Buddha in person. The original construction date is unknown, but Zen Priest Songgok supposedly patched things up in 1704. 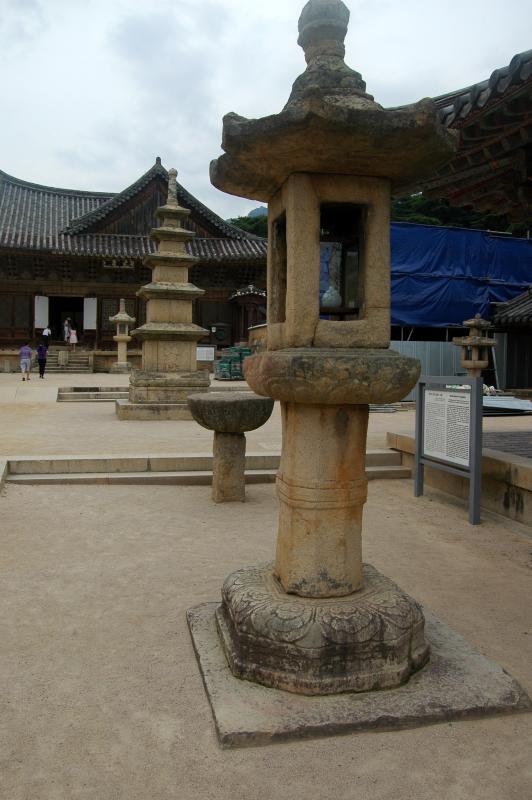 Not too many things can last for a thousand years – but this stone lantern certainly appears that way. Its age can only be guessed at, but the early Goryeo period (10th or 11th century) is the likely time period. It’s purpose was to light both the physical way and to show the truth of Buddha’s teachings. Lanterns are placed next to pagodas, and the pair rest in front of the aforementioned Yeongsanjeon shrine. 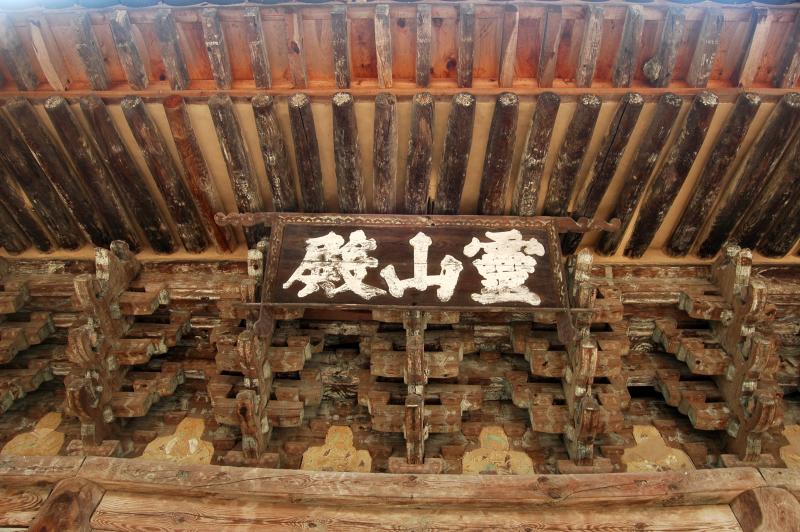 The wood remains, although time has taken a toll on the paint. Not to worry, fresh paint lovers: not pictured nearby are the quarters for templestayers – fresh paint and wood awaits. 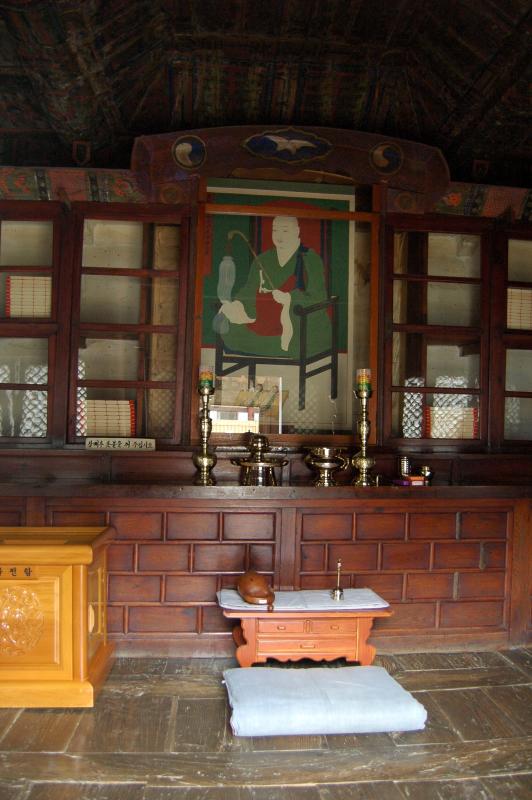 Both tourists and faithful followers made it difficult to take pictures without people in the shot. This shrine is dedicated to a sanshin, or mountain spirit, although there was no information about who this was on the temple grounds that I saw. I’m grateful to Dr. David Mason for indicating that this is the Josa-dan or Altar for the Founder. The painting is of master Jajang-yulsa, the aforementioned founder of the temple in 643. 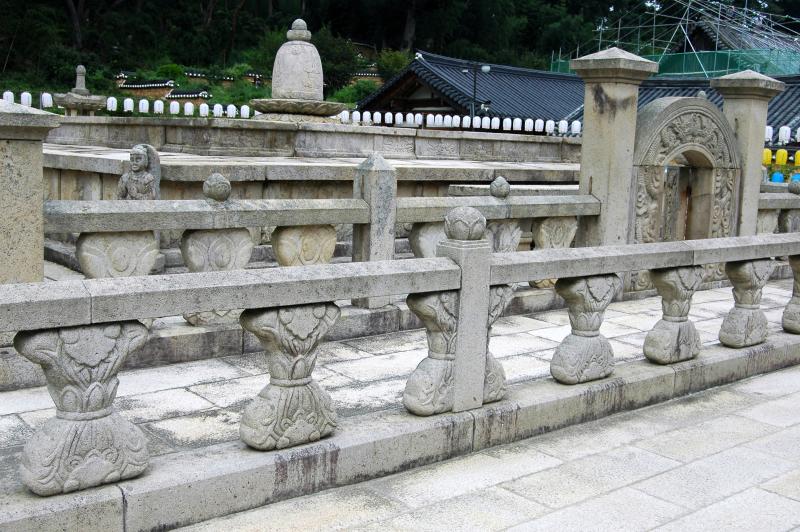 Time for the pièce de résistance: Buddha’s teeth, knucklebone, “skullbone [sic]”, and a sarira, according to an English sign on the main shrine’s back wall. That sign also details the many reconstructions:

Although the sign doesn’t elaborate what was destroyed or reconstructed, it’s a wonderful history that should be disseminated in more places. Dr. Mason indicated this was called the Geumgang-dan or Diamond Altar, and was one of the five places in which Jajang enshrined the relics of Sakyamuni buddha that he got from Wutai-shan. Master Jajang made the rule that every man who passed the training and was taking the vows to be a Korean Buddhist monk had to do so in front of this altar — it’s the national site of monastic investiture. 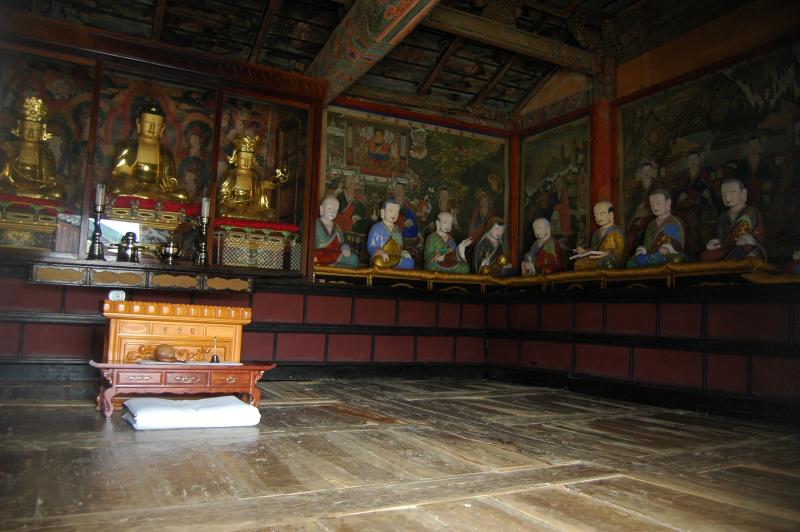 Eungjinjeon – also known as Nahanjeon and dedicated to the 16 disciples of Buddha. The shrine was originally built in 1677 by Buddhist Priest Ji Seom, and has been renovated several times with no specific dates given. 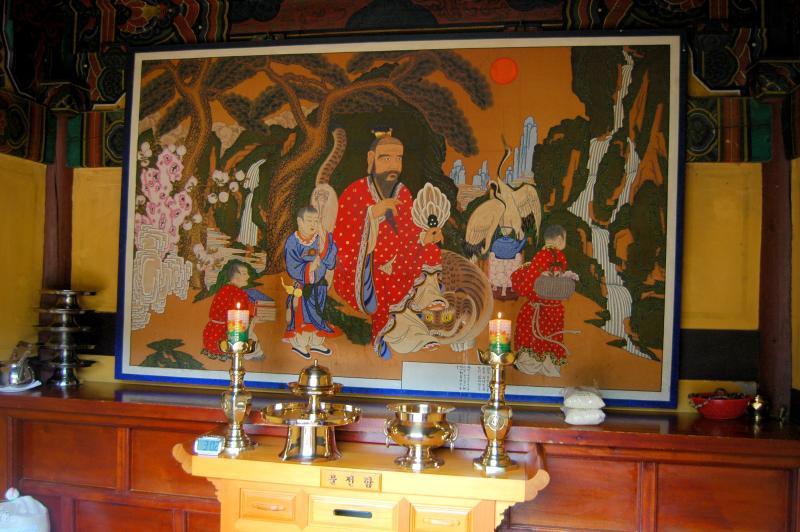 Another mountain spirit – another name not mentioned on any tourist signs… Dr. Mason indicated that this painting represents the san-shin of the mountain he represents – in this case, the Yeongchuk-san san-shin. 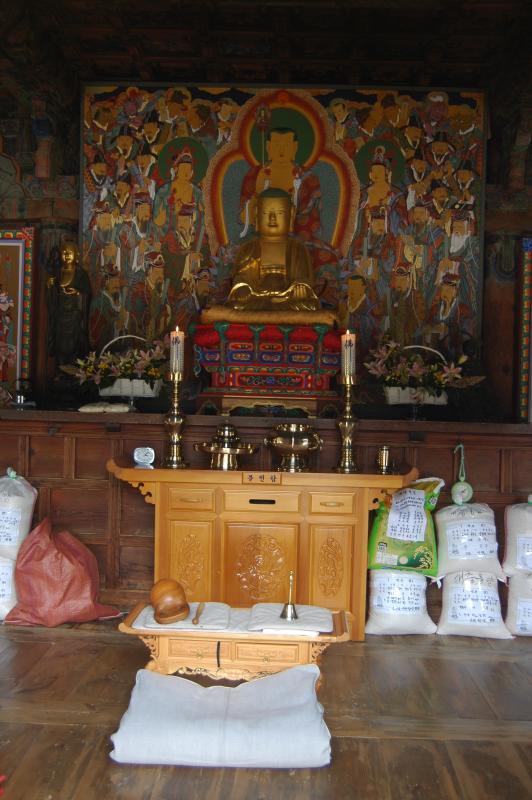 Myeongbujeon – referring to the afterworld or hell. It has also been called the Jijangjeon because hell is presided over by the Jijangbosal (Ksitigarbha Bodhisattva). People come here to pray to Ksitgarbha (who postponed becoming a Buddha to help all sentient beings in the living world, the netherworld, and the six worlds in-between) for the rebirth of their ancestors in paradise. 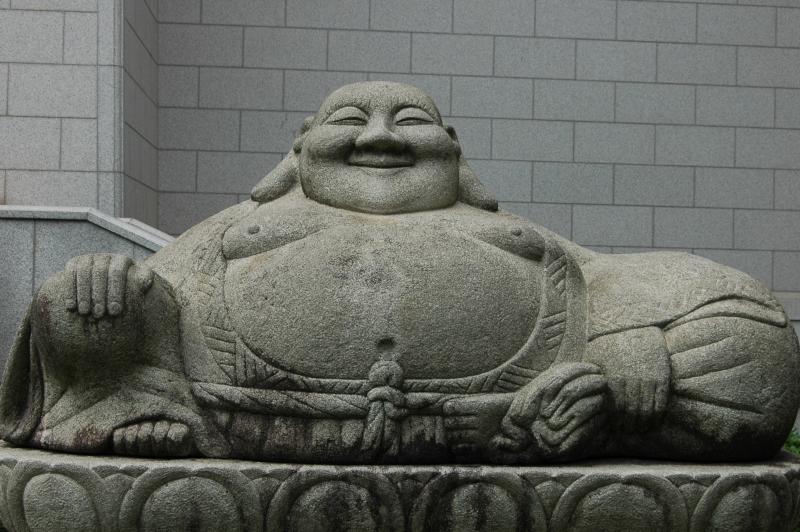 Perhaps a Buddha more people are popular with – this modern stone creation sat next to a wonderful-looking museum. Next trip, perhaps.

There is easily enough to keep you busy for an afternoon – definitely not a temple you can zoom through. Plan to spend at least two hours around the temple grounds, and another hour in the museum. A restaurant by the parking lot offers some basic Korean foods; while nothing fancy, it will fill you up until you can get something more substantial later.