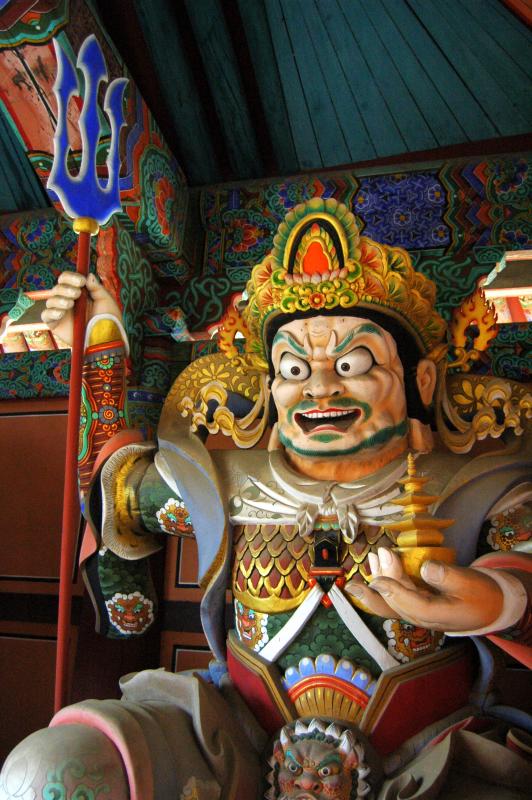 This deva carries the pagoda in one hand and a deadly weapon in the other – bow to all four, including 다문천왕 (deo-mun-cheon-wang) before passing through.

Yongjusa (용주사, 龍珠寺) is unique among Korean temples for having a 홍살문 (hong-sal-mun), or a gate typically found at the entrance of a royal tomb:

This deva carries the pagoda in one hand and a deadly weapon in the other – bow to all four, including 다문천왕 (deo-mun-cheon-wang) before passing through.

Yongjusa (용주사, 龍珠寺) is unique among Korean temples for having a 홍살문 (hong-sal-mun), or a gate typically found at the entrance of a royal tomb: 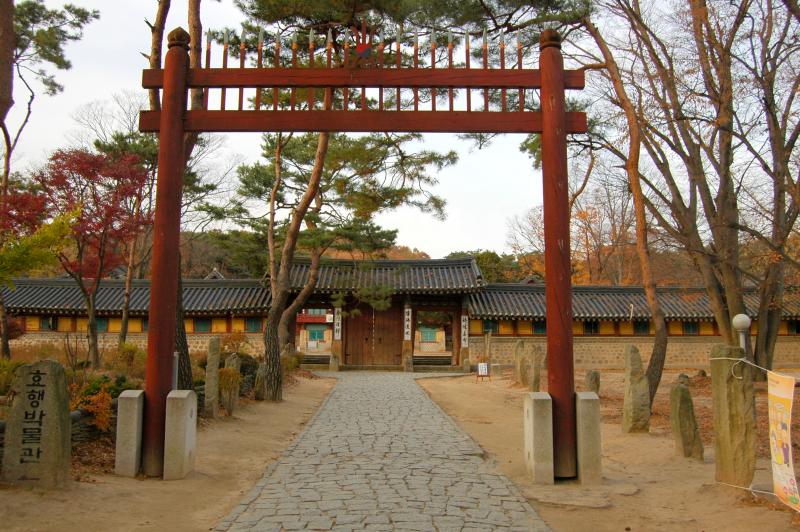 Originally built in 854 A.D. and named Garyangsa, it was known for being surrounded by beautiful mountains and crystal-clear waters. The mountains are still around, although the city of Suwon is creeping up on the temple’s door step. Destroyed by the Manchu during their second invasion of Korea, Joseon-Dynasty King Jeongjo (r. 1776-1800) moved his father’s remains (Crown Prince Sado) to this area and rebuilt the temple to pray for his father’s soul. He must have been stuck for a name, but it came to Jeongjo the night before the temple was completed. The king dreamed of a dragon with a magic gem in its mouth, flying to the heavens. That gave him the name for the new temple: ‘Yong’ (dragon) ‘ju’ (magic gem) ‘sa’ (Buddhist temple).

But, Chris, why didn’t Crown Prince Sado get buried in a royal tomb like all the other Joseon-dynasty kings? I’m so glad you asked. According to one official tourist website, he was. The tomb was called 현륭원 (Hyeol-lyung-won), and Yongjusa was built near the tomb to protect it. In 1899, Crown Prince Sado was posthumously named Emperor Jangjo by then-Emperor Gojong, and that’s when the tomb received an upgrade to befit the posthumous leader. Today, the tomb is known as 융능 (Yung-neung), and is a 20 minute walk down the road from Yongjusa. The tomb of King Jeongjo and his wife is named 건능 (Geol-leung), and is part of the same area.

Still with me here? The good news is that you need not know any of this to come to the temple – or the nearby tombs. While much of the basic information is available in English, the rest remains in Korean. 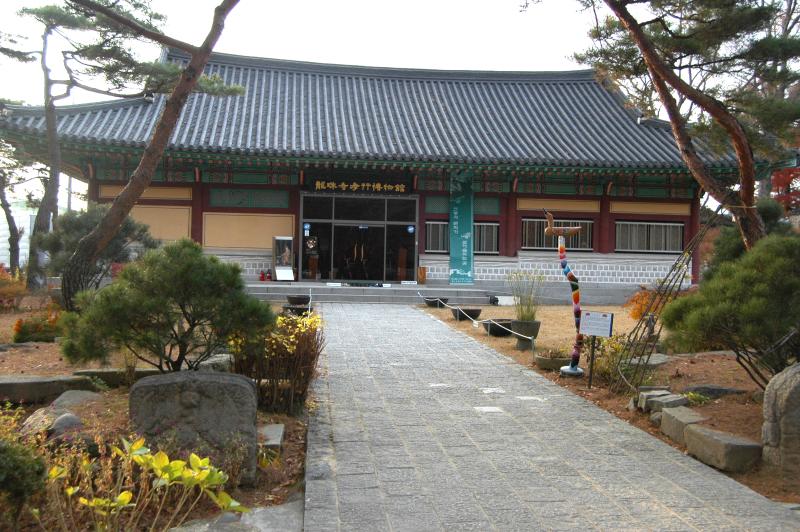 A nice museum of the kings lives is part of the temple grounds. Explanations are primarily in Korean, and photos aren’t allowed inside (thus the lack of photos here). After taking off your shoes, you’ll have the opportunity to see some engravings of the 부모은중경 (bu-mo-eun-jung-gyeong) – a book written by King Jeongjo 0n the subject of filial piety and respect for your parents. There’s also some 19th century Buddhist flags and several Tangible Cultural Properties inside. Give it a good 20 minutes to explore before venturing onward. 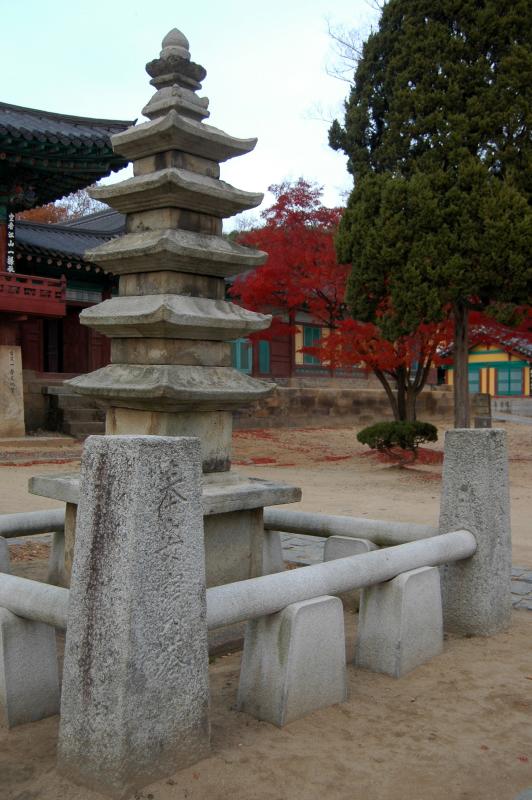 A five-story stone pagoda (석탑), which stands in front of the 2nd main gate. 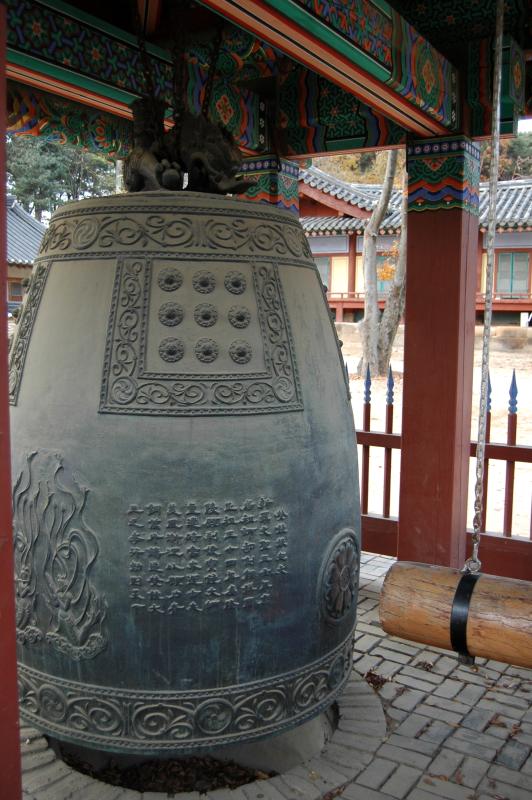 One of three bells like it in the country, this bronze bell was cast in 854 AD for the original temple. We’re talking 1,500 kilograms heavy, a depression in the bottom to ensure reverberation, and a dragon motif in the Goryeo-dynasty bell. Gorgeous. 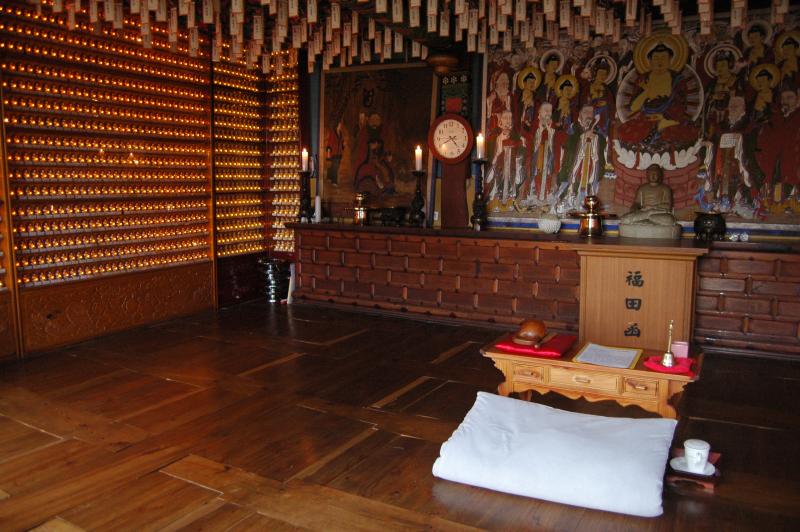 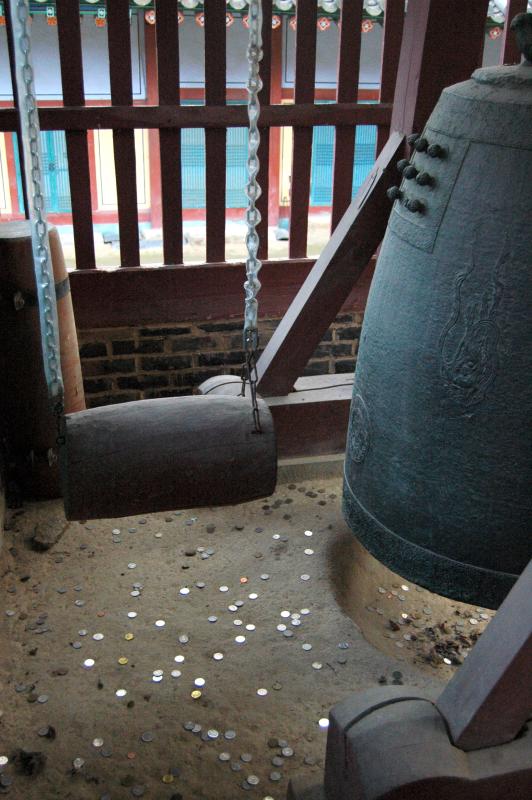 The Sacred Bell of Yongjusa – and a National Treasure to boot. This bell is called 범종 (Beom-jong), or the bell of truth. Hearing this bell can supposedly help you escape from all evils; that, perhaps, is the reason for all the coins. 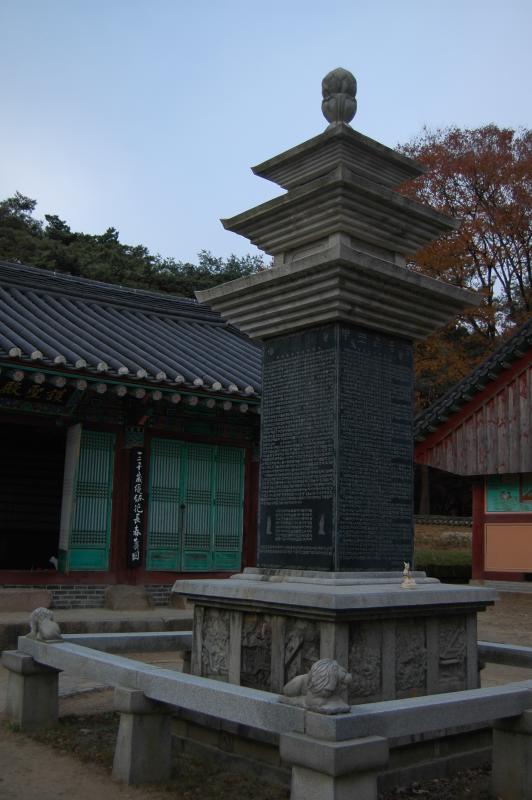 This pagoda contains the 부모은중경 (bu-mo-eun-jung-gyeong) sutra – the filial piety works that Jeongjo either wrote or was inspired by. This pagoda rests in front of 호성전 (Ho-seong-jeon): 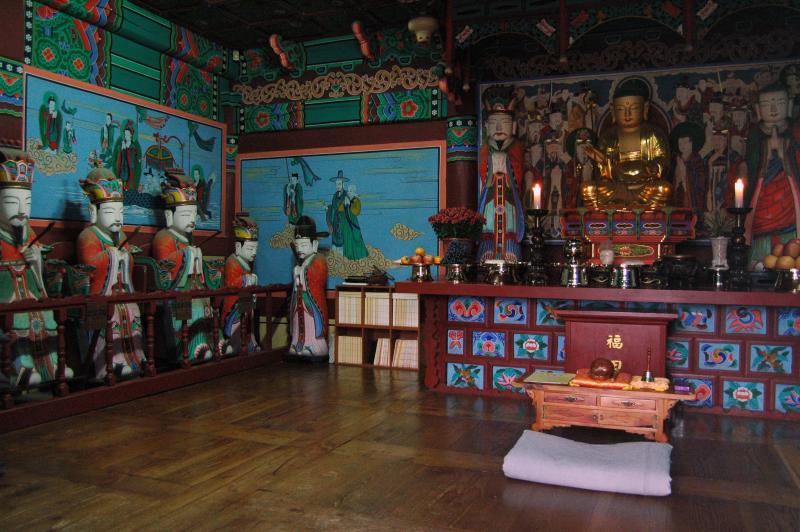 I’m not quite sure who the statues represent – any thoughts? 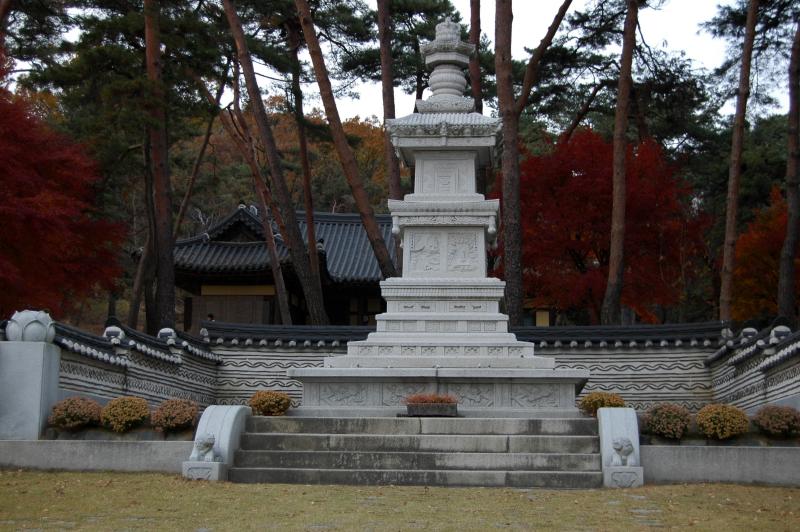 A newer looking pagoda (전강대종사, jeon-gang-dae-jong-sa), along with a mysterious building that could only be accessed by a blocked path.

It’s worth noting that this is one of the most reverent-feeling temples I’ve had the privilege of visiting. It’s far enough away from the main roads and tall apartment buildings that you’re unlikely to think about them while enjoying the area. That the reverent were seen in honest meditation put the rest of the crowd in much the same mood. Although many of the filial piety messages were not in English, it seemed to resonate with many of the locals that visited the place. It’s worth a visit if you’re fine with getting off the beaten path, and

Directions to Yongjusa: get to Byeongjeom station on line 1 of the Seoul subway system. Take exit 2 to street level, then walk to the road and look to the right for the bus stop. Get on bus 34, 34-1, 44, or 50 and ride it to the Yongjusa bus stop – it should be about a 10-15 minute ride. Admission 1,500 won; open 8am – 7pm (ticket office closes at 6pm-ish). For more information, see one official tourism page or the official temple website (Korean only).

Help me win some euro in a new travel contest – vote for my idea of a wiki-sourced public transportation system!, or make some money with your travel blog.