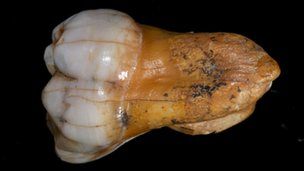 Props to SGU for reminding me of this remarkable scientific discovery, which just might be MY “Science Story of 2010″. What I’m referring to is the discovery of a single finger bone from an ancient human not descended from either modern homo sapiens or homo neanderthalensis, but possibly living contemporaneously with both.

If further work does support the initial conclusions, the discovery would mark the first time that an extinct human relative had been identified by DNA analysis.

Props to SGU for reminding me of this remarkable scientific discovery, which just might be MY “Science Story of 2010″. What I’m referring to is the discovery of a single finger bone from an ancient human not descended from either modern homo sapiens or homo neanderthalensis, but possibly living contemporaneously with both.

If further work does support the initial conclusions, the discovery would mark the first time that an extinct human relative had been identified by DNA analysis.

It would also suggest that ice-age humans were more diverse than had been thought. Since the late nineteenth century, researchers have known that two species of Homo — Neanderthals and modern humans — coexisted during the later part of the last ice age. In 2003, a third species, Homo floresiensis, was discovered on the island of Flores in Indonesia, but there has been no sign of this tiny ‘hobbit’ elsewhere. The relative identified in Siberia, however, raises the possibility that several Homo species ranged across Europe and Asia, overlapping with the direct ancestors of modern people.

The Siberian site in the Altai Mountains, called Denisova Cave, was already known as a rich source of Mousterian and Levallois artefacts, two styles of tool attributed to Neanderthals. For more than a decade, Russian scientists from the Institute of Archaeology and Ethnology in Novosibirsk have been searching for the toolmakers’ bones. They discovered several bone specimens, handling each potentially important new find with gloves to prevent contamination with modern human DNA. The bones’ own DNA could then be extracted and analysed.

When the finger bone was discovered, “we didn’t pay special attention to it”, says archaeologist Michael Shunkov of the Novosibirsk institute. But Pääbo had established a relationship with the Russian team years before to gather material for genetic testing from ice-age humans. After obtaining the bone, the German team extracted the bone’s genetic material and sequenced its mitochondrial DNA (mtDNA) — the most abundant kind of DNA and the best bet for getting an undegraded sequence from ancient tissue.

After re-reading the mtDNA sequences an average of 156 times each to ensure accuracy, the researchers compared them with the mtDNA genomes of 54 modern humans, a 30,000-year-old modern human found in Russia and six Neanderthals. The Denisova Cave DNA fell into a class of its own. Although a Neanderthal mtDNA genome differs from that of Homo sapiens at 202 nucleotide positions on average, the Denisova Cave sample differed at an average of 385 positions.

The differences imply that the Siberian ancestor branched off from the human family tree a million years ago, well before the split between modern humans and Neanderthals. If so, the proposed species must have left Africa in a previously unknown migration, between that of Homo erectus 1.9 million years ago and that of the Neanderthal ancestor Homo heidelbergensis, 300,000 to 500,000 years ago.

In addition, a tooth found in the Denisova cave raises the possibility of a connection between Denisovans and modern-day Melanesians.

Earlier this year the team showed that the mitochondrial DNA from the finger bone displayed an unusual sequence, suggesting that it came from an as yet unknown ancient hominin form. Using techniques that the researchers developed to sequence the Neandertal genome, they have now sequenced the nuclear genome from the bone. The researchers found that the individual was female and comes from a group of hominins that shared an ancient origin with Neandertals, but subsequently had a distinct history. They call this group of hominins Denisovans. Unlike Neandertals, Denisovans did not contribute genes to all present-day Eurasians. However, Denisovans share an elevated number of genetic variants with modern-day Papuan New Guinean populations, suggesting that there was interbreeding between Denisovans and the ancestors of Melanesians.

In addition, a Denisovan tooth found in the same cave shows a morphology that is distinct from Neandertals and modern humans and resembles much older hominin forms. Bence Viola, a scientist at the Max Planck Institute for Evolutionary Anthropology comments: “The tooth is just amazing. It allows us to connect the morphological and genetic information”.

And, this is consolation for research, that East Asia is probably not the site of canine domestication.

“Dogs seem to share more genetic similarity with Middle Eastern gray wolves than with any other wolf population worldwide,” said Robert Wayne, UCLA professor of ecology and evolutionary biology and senior author of the Nature paper. “Genome-wide analysis now directly suggests a Middle East origin for modern dogs. We have found that a dominant proportion of modern dogs’ ancestry derives from Middle Eastern wolves, and this finding is consistent with the hypothesis that dogs originated in the Middle East.

Previous genetic research had suggested an East Asian origin based on the higher diversity of mitochondrial sequences in East Asia and China than anywhere else in the world. (Mitochondria are tiny cellular structures outside the nucleus that produce energy and have their own small genome.) However, that research was based on only one sequence, a small part of the mitochondrial genome, Wayne noted.