This is probably the best view you can get of North Korea if like me you’re too much of a wuss to go in on an organized tour.﻿ 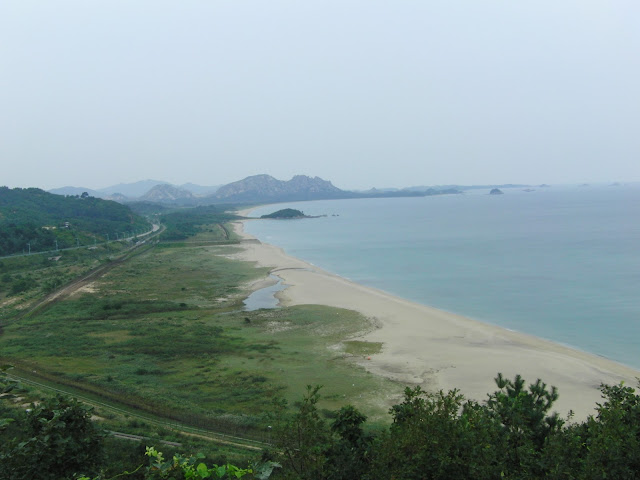 This is probably the best view you can get of North Korea if like me you’re too much of a wuss to go in on an organized tour.﻿

As part of our road trip we visited the most northern tip of the east coast. Positioned there is the Goseong Unification Observation Centre. This is mainly an observation platform with a small exhibit about the North and the politics surrounding the divide. It was built in 1983 and from here you can view Mount Geumgangsan and Haegeumgang as well as some nearby islands.
Driving on the road towards the north we passed lots of concrete structures sat either side of the road. 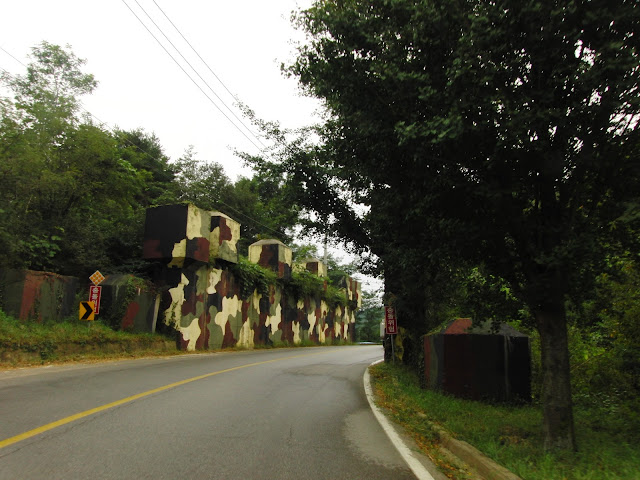 I wasn’t too sure what the purpose of them were at first but a little Google search helped me out. They are positioned there so that in the event things turn sour (more sour) between the two countries they can be pushed over onto the road. The two structures will interlock and create a road block to prevent an easy route into South Korea for the North’s artillery vehicles. 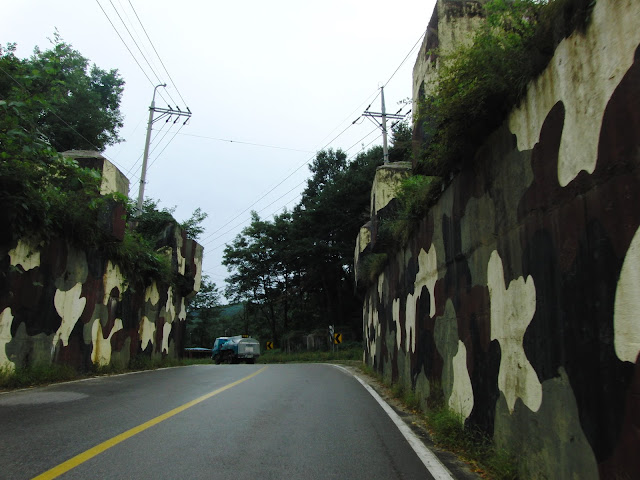 We passed several of them, all a strange and eerie reminder of the tensions that exist between the two countries. I certainly hope it’s never necessary for them to need to be used!
To enter the area you’ll need an entrance form and sign to place in your car window. 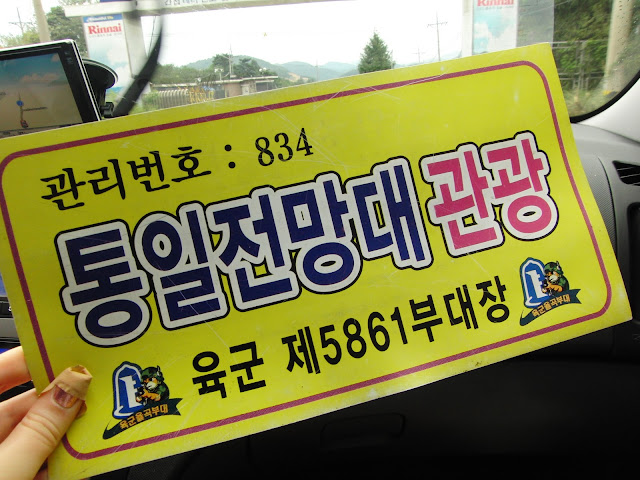 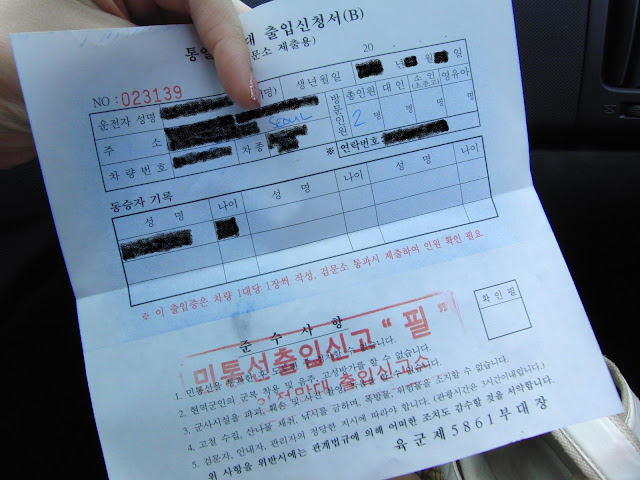 We weren’t aware of that so we reached the checkpoint and had to go back to get it. If you’re driving there then watch out for signs to a small place called the ‘Tongil Security Park’ where you need to stop and get the relevant forms. It’s on the left side of the road.

When you pull into the area it’s rather unclear where you should go to get the form. There is a tourist information point but when we visited the person working there spoke no English.

There is a building housing small souvenir and snack food stalls. The place to get your form is inside there.

﻿﻿After we’d gone back and managed to work out where to get the entry permit we headed back along the road to the check point. 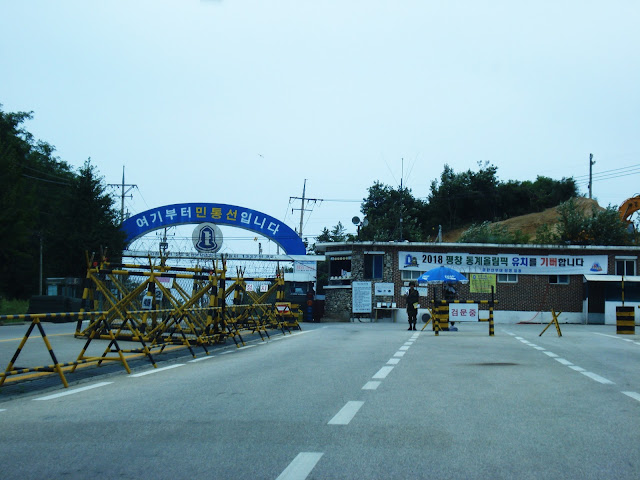 Once inside the area there wasn’t a great deal you could see from the road. There seemed to be some construction of new roads leading north as though the South is preparing the infrastructure just in case of a sudden reunification. There is also a DMZ museum but we didn’t visit that.

We soon arrived at an area where the road ended. There was a distinct lack of signage or directions in English and we really weren’t too sure where the unification centre was. Although there wasn’t a great deal of people about that day we managed to watch a Korean couple, who we’d spotted getting the forms at the same place as us, head off up a hill. We figured there couldn’t be a heck of a lot of other places they were headed to, so we followed them.

When we got to the top we had a wander around and took in all the views. The place itself was deserted but seemed to have been designed to cater to crowds of people. I actually read that the centre has had over 28 million visitors which was hard to believe on this particular day.
﻿ 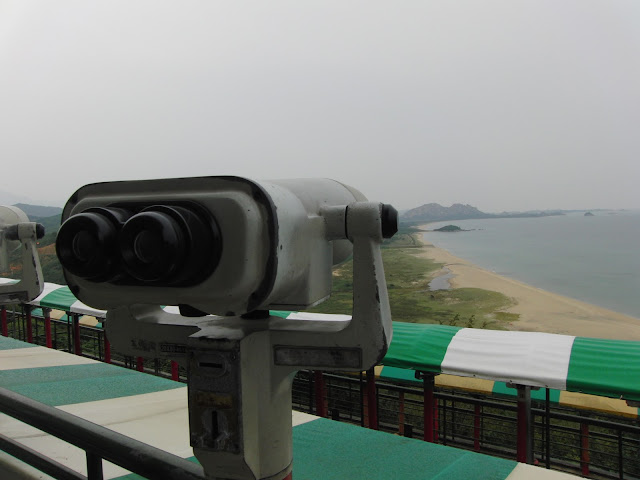 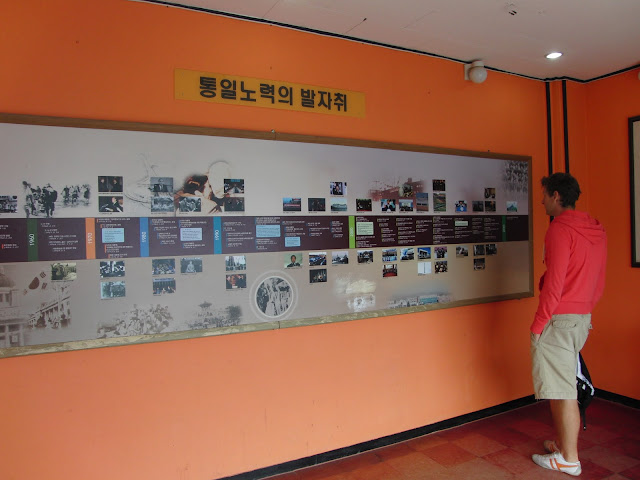 Inside the building they have a small exhibit about North Korea and from what I could assess the history of the divide. Sadly there is nothing written in English though. 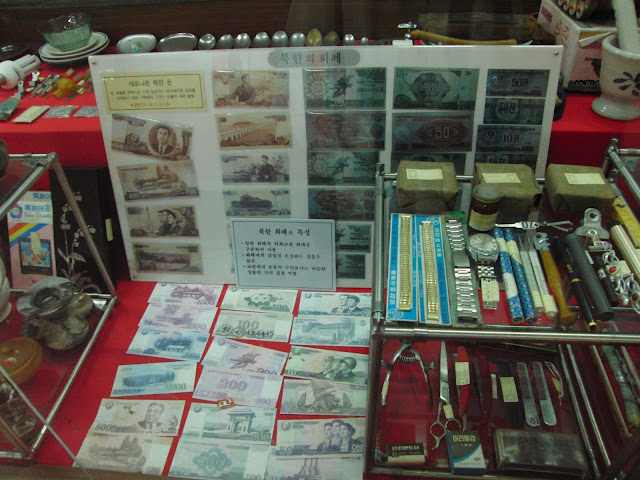 I found it fascinating to see the items on show and looking towards the north really made me consider the sad reality of the situation with North Korea. Although it wasn’t simple to reach it is a great place to have visited and I would highly recommend you pay it a visit if you’re able to.
﻿If you don’t have a car then the easiest way to visit the unification centre is by an organized tour bus. You can find more information about tours and the Unification centre itself by visiting the official website.
Unification Observatory website.
If you would like to visit as an individual then you can find information of how to get there at the Korea Tourism Organization website.
Information :