Thursday was a sad day as I bid goodbye to an old friend, one that had been loyal, devoted, unpretentious for almost six years. 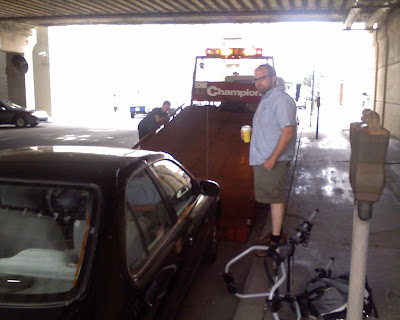 Thursday was a sad day as I bid goodbye to an old friend, one that had been loyal, devoted, unpretentious for almost six years.

She was a good car, she was. And what she lacked in style in life, she made up for in her death. It was on Thursday afternoon, following a trip to the Mutter Museum in Philadelphia with Re., that we returned to my faithful 1996 Nissan Sentra down the road at a metered parking space, only to find she would not start. She would not start, she would not start. And time was running out on the meter, which charged 25 cents per every TEN MINUTES.

We called E., who was home and lived nearby, who drove over to this heavily trafficked roadway and sidled up to the Sentra in a vain attempt to jump it. With that option taken off the table, we pooled together our quarters, dimes and nickels, and fed the evil meter until 8 p.m., when it would be free to park until the next morning.

When me and Re. got back to the car in the morning, the tow truck had not called yet so we fed the evil meter another 75 cents and went for breakfast at Au Bon Pain. Hey! I know I try to align myself as some sort of eat local dork or something, but man, that was a good breakfast sandwich. Shitty coffee. It’s in the yellow cup I’m holding in my hand in the picture above. Yuck.

So, the tow guy calls me and we head back JUST DOWN THE ROAD. As we turn the corner, what do I see but a large, imposing black woman in a Philadelphia Parking Authority uniform walking away from my car, having left me the THIRD ticket I have received in Philly in the last, what, three weeks? I swear, from a distance, she lookalikeaman.

The tow guy came, hitched my car, and off he went. Forever. And ever. 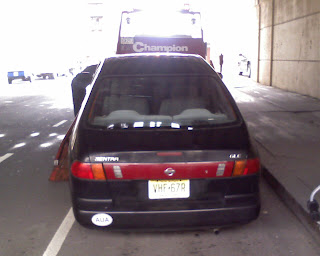