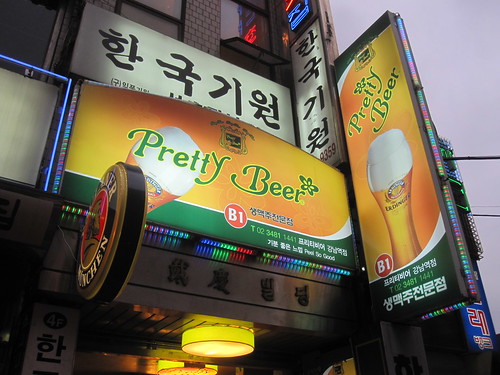 Konglish doesn’t necessarily refer to the strange pronunciation of English words, but more of their amusing application.
While there’s never any consumer backlash in this country, it’s amusing to think about what would happen if an Australian pub were named Pretty Beer.
Hypothetical Australian mobile phone conversation (in heavy Australian dialect):
Steven: “G’day Bazza! Didja wanna getta schooner before hittin’ the can mate?”
Barry: “Crikey Steve-O! Ah gee, well me sheila’s at the footy, so where ya drinkin’ mate?”
Steven: “A waterin’ hole called, er…  Pretty Beer.”
G’day: Colloquial Australian greeting
Schooner: 285 – 415ml of beer, depending on which state of Australia you’re in
Hitting the can: Going to sleep
Mate: An associate or friend
Crikey: Exclamation of surprise
Sheila: A female
Footy: Australian rules football (match)
Watering hole: A place to drink
*Also note the peculiar metamorphosis of names when referring to friends. 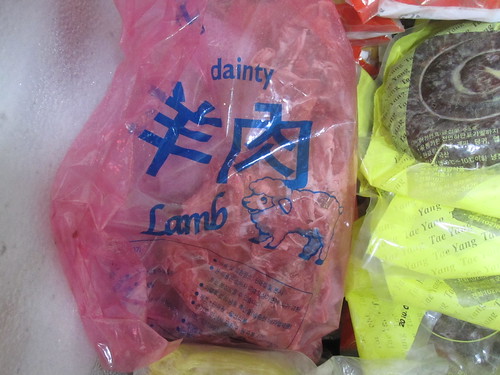 The name of this product is ‘Dainty Lamb’. It’s a bag of deep frozen lamb chops imported from China. Dainty is a quaint little word that unfortunately appears to be disappearing from the teenage lexicon. It means delicately charming, or exquisite.
It won’t be long before we have a brand called Delicately Charming Lamb in direct competition with our old Dainty friends. 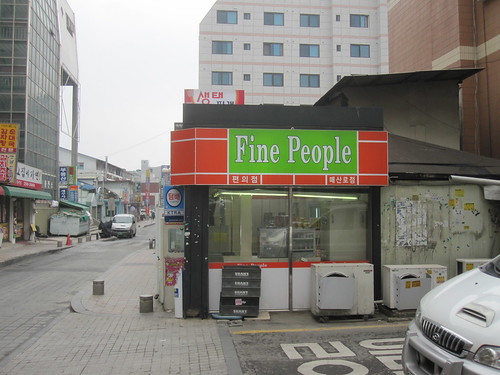 And if you don’t need any Dainty Lamb, how about some Fine People? This is a convenience store in Suwon, and a great location for a group photo. 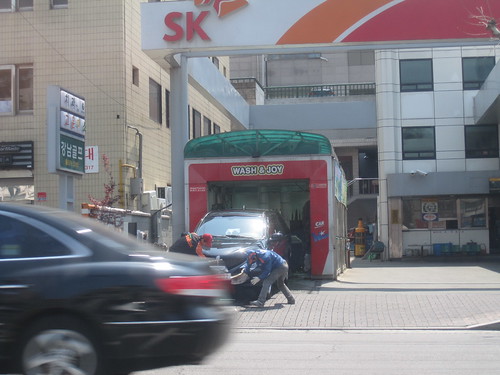 I snapped this one while in a taxi. Above the exit to the carwash it says ‘Wash and Joy’. Considering that they offer both for $10, could it be false advertising?
Well, you never know until you’ve tried. 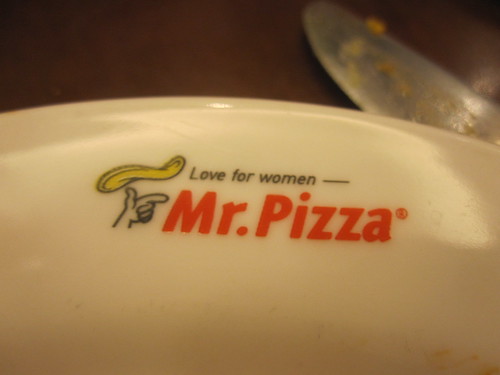 And one of the weirdest things I’ve seen is Mr Pizza’s motto: Love for women.
Mr Pizza is a large franchise chain here in Korea. Can anyone fathom the logic behind this one? The general public here don’t seem to notice. 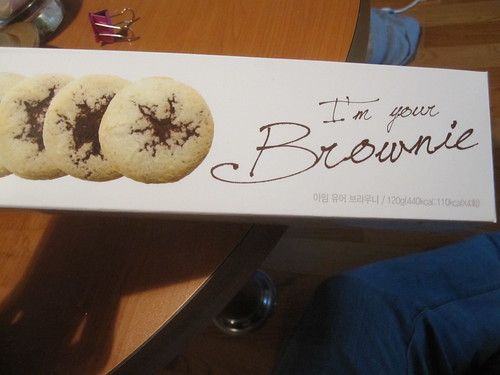 These “I’m Your Brownie” biscuits are better than my old favourites, called Binch. “I’m Your… 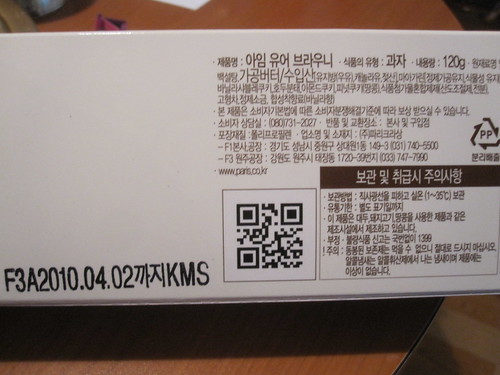 On the back of the packet it has a convenient Korean transliteration of I’m Your Brownie into ah-eem-yu-oh-beu-ra-oh-knee. But more interestingly, what’s that odd little boxed graphic down the bottom?
That, readers, is the newer form of bar code developed by GS-1, the international authority on bar code standards. You can often see them on airport boarding passes, but they’re starting to appear in other places. Alphabets are inefficient methods of communicating numerical information, and while barcodes are better, they only allow single lines of information. GS-1 has developed this series to convey more information to a scanner using less space. As well as product information, they also contain the ‘sell-by’ date, and are supposed to alert the cashier if customers buy a product that has expired. Looking at the design, I guess that the three outer boxes are for orientation, while the remaining pattern consists of binary information running in two dimensions.
Pretty nifty eh?