In Korea, mobile phones are called ‘핸드폰’, or ‘hand-phones’, and it seemed that now I was living in Korea I had to have one. The search began soon after my arrival. It proved to be a monumentally frustrating experience, so a friend loaned me an ‘old’ Samsung SPH-M4655 as an interim measure. I carried it around for a while, but found it slow, and the on-screen keyboard was too frustrating for my main intended purpose, which was making various notes while I was out, such as Korean words I saw and their translations.

In Korea, mobile phones are called ‘핸드폰’, or ‘hand-phones’, and it seemed that now I was living in Korea I had to have one. The search began soon after my arrival. It proved to be a monumentally frustrating experience, so a friend loaned me an ‘old’ Samsung SPH-M4655 as an interim measure. I carried it around for a while, but found it slow, and the on-screen keyboard was too frustrating for my main intended purpose, which was making various notes while I was out, such as Korean words I saw and their translations.

I wanted a smartphone with a keyboard, but as I visited one store after another a depressingly familiar pattern began to emerge. Again and again I was told that ‘nobody’ really uses phones with physical keyboards. Sometimes the store was large or varied enough to have a selection – but the selection was, without exception, either the Sony Ericsson Xperia X1, the Samsung Omnia Pro B7610, or the LG KE850 aka the LG Prada Phone. There was nothing else, and maybe I shouldn’t have been surprised, because no matter how many hundreds of stores there can be in one area – and there are – it doesn’t take long to realise that they all carry the same stock, and most of the stores are basically the same. KT, SK Telecom and LG Telecom. The lack of diversity extends to the network providers, who are… KT, SK Telecom and LG Telecom. Now you begin to see the problem. Here are three mobile phone stores, for example, opposite each other on a road, all selling the same phones for the same networks: 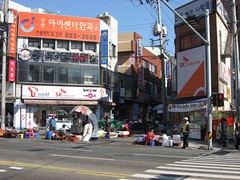 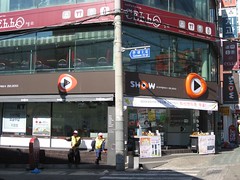 And it became more surprising, because if I had any ideas about cheap and ubiquitous mobile Internet access, which I definitely listed as a nice to have, I could forget it. The limitations, complications, and charges per gigabyte (Gb) were simply so far off the scale with KT and SK Telecom that they were out of the question.

For example, with SK Telecom there are four ‘different kinds’ of ‘Internet’ access:

So, when you take out your phone service, you first have to decide what kind of ‘Internet’ access you want – Free, Nate, June, or Real. After this, you then need to decide on your data allowance. There are three types of data allowance package:

This might be confusing enough, but with the exception of ‘Data Perfect’ it’s the additional above-quota charges which can really provide the sting in the tail. Additional data usage is charged at approximately 1.8 won per kb (although the precise amount depends on the tariff you are on), which means around 1,843 won per Mb. So running just 100Mb above your quota would land you with an additional bill of 184,300 won (£95/$159). And people do, so there are a considerable number of horror stories and tales of woe on various Korean message boards about people receiving absolutely huge phone bills. Suffice to say, one of the first things a lot of people seem to do with their new phones – is disable 3G and their data services to ensure that they never accidentally use it.

Fortunately, it seems the Korean Government decided the mobile network operators were deliberately making life difficult for people and they ordered them to switch to clearer service offerings. Which is just as well, because having worked through all this trying to make sense of it, I felt like giving up entirely and buying the cheapest phone on the market for the occasional call. The upshot of the Government intervention is that from this month, SK now have the following packages:

By comparison, LG Telcom appeared to be a much better system – charging 6,000 won (£3.10/$5.18) per gigabyte under the old system, which seemed much more reasonable. I was minded to choose LG Telecom as my provider, but there was another complication – we couldn’t get a smartphone with a keyboard on LG Telecom, not even LG’s Prada Phone, although LG were happy enough to sell us numerous phones from their bitter rival, Samsung. LG produce a number of phones with a keyboard, but not for domestic consumption, and not on their own network. I came around to the idea that this was why their mobile Internet access was comparatively cheap – it wasn’t something you were probably going to be using a lot with the phones they did support; once you pulled up an on-screen keyboard the amount of space to view what you were doing was typically so small it was extremely off-putting, and far from a genuine browsing experience as far as I was concerned. So it seemed I could forget about having mobile Internet access with the kind of phone which would make it worthwhile.

And what of KT and SK Telecom? Well, they were more than happy to sell me the LG Prada Phone for almost 1,900,000 won (£1,000/$1,644), and it is a very nice device, but there was no way I was going to spend around 1.2 million won just for the word Prada written on an electronic device. If I wanted to advertise the lack of meaning in my life I could write a blog, I don’t need to advertise it in public with my choice of phone. And since their mobile data charges were so expensive, it took away some of the purpose of having a device designed to provide a more interactive Internet experience.

Besides which, I didn’t really like the Samsung Omnia’s keyboard, which seemed to defeat the purpose, and the feedback I got in the stores on the Xperia X1 was far from positive, with one assistant going so far as to tell us that they were withdrawing it from sale within their chain of stores due to the huge number of after-sales faults it developed. Allegedly. I couldn’t help wondering if it suffered from a very common but somewhat hard to define fault that blights a range of items in this country, including the Sony Bravia screens which are often to be found forlornly in the corners of some of the electrical stores – that of being ‘Not Korean’. Certainly, while the phone isn’t perfect, the Korean Xperia experience seems hard to resolve against the Western one.

So I gave up, and bought a Samsung SPH-M4800, which ironically isn’t very far away from where I began with the borrowed M4655. It has the questionable virtue of having a tiny Blackberry-style keyboard on the device which makes it possible to write slightly faster than the hardened text junkie can with predictive input, but I guess it’s enough for me to wander around Busan writing down notes and words in Korean and English. Of course, the device uses Korean Windows Mobile 6.1, which makes navigating around its unfamiliar interface somewhat challenging, even though I’ve been using Korean Windows XP on my desktop and NC10 netbook for some time now. It is at least, quite fast, unlike the M4655. 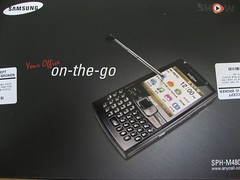 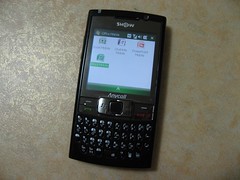 If the whole phone buying experience was ultimately very disappointing from a form and function perspective, there was at least some good news. The price was 70,000 won (£40/$66) on a 24-month 10,500 (£5.40/$8.85) per month contract with and a 60,000 won (£31/$51) charge if I cancel before the end of the contract. Assuming I don’t cancel, this puts the total cost of ownership at 332,000 won (£170/$279), which I didn’t think was too bad for a Windows Mobile-based smartphone which can be synced to my desktop and automatically hold my calendar, contacts and Word files with lists of Korean vocabulary and phrases. In fact, a friend of ours who’s thinking of going into mobile phone retailing when he graduates picked out the deal for us, and seemed to think it was a good one, so I just went with it. Maybe two years from now, I can find a smartphone with a keyboard which can be used for cheap Internet access in this country.

Shortly after I bought the M4800, the same friend who’d picked out the deal bought an Xperia X1, so perhaps I’m not the only one who thinks that physical keyboards have a future.