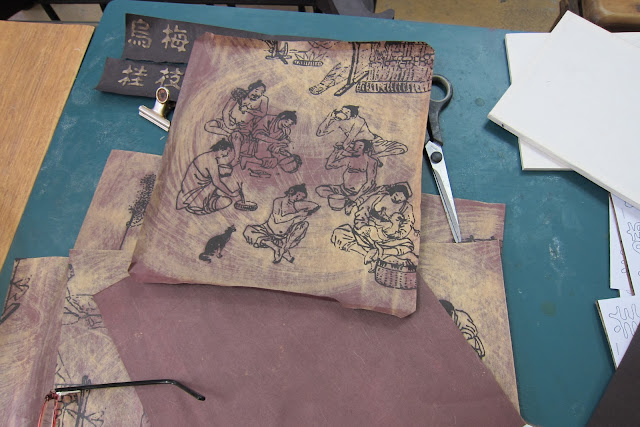 Hanji class on Friday had me covering the doors of the cabinet with this hanji paper which will be the inside. 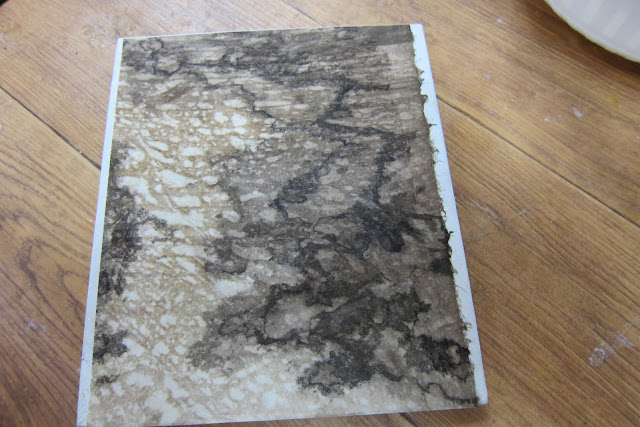 And this paper on the outside of the doors.

Hanji class on Friday had me covering the doors of the cabinet with this hanji paper which will be the inside.

And this paper on the outside of the doors. 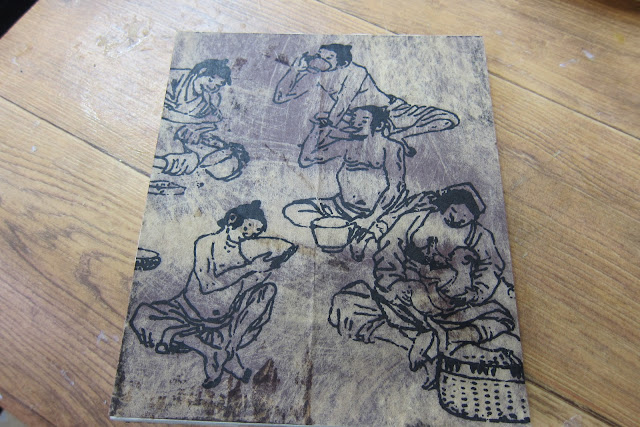 This is what the inside of the door looked like when I was finished. 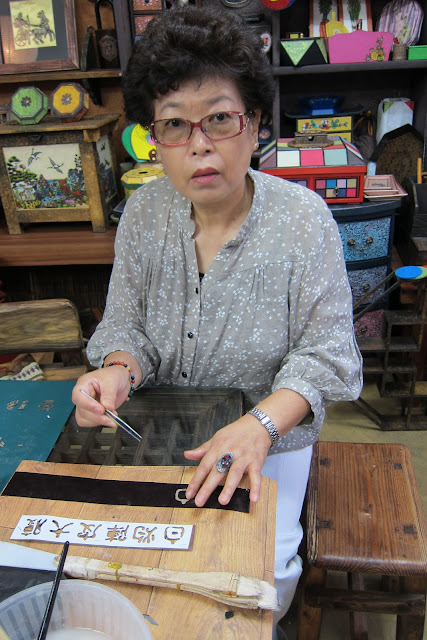 Guess who showed up late in the afternoon?  My favorite hanji classmate.  She had been missing in action for about two months.  She was doing exhibitions and other things that had kept her away from hanji. 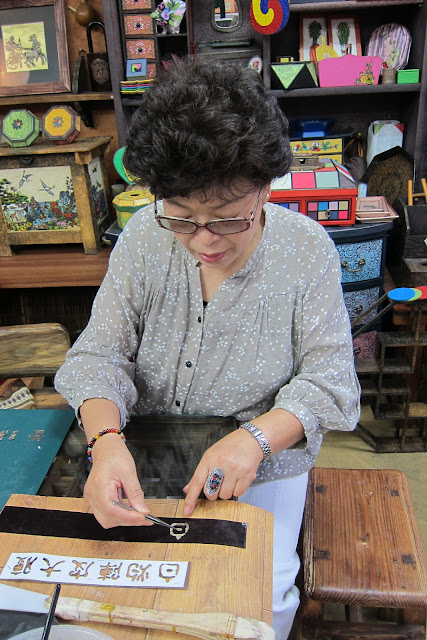 So of course, she saw I was struggling with putting the chinese characters together once I had cut them up so she sat down beside me and glued them in place for me.  She is a sweetie! 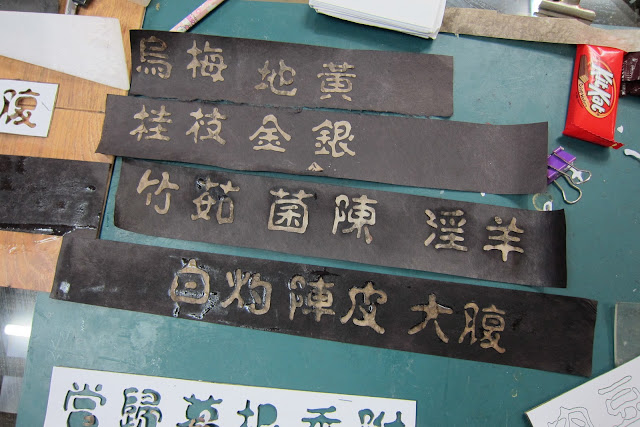 Here’s what she had finished for me by the end of class. 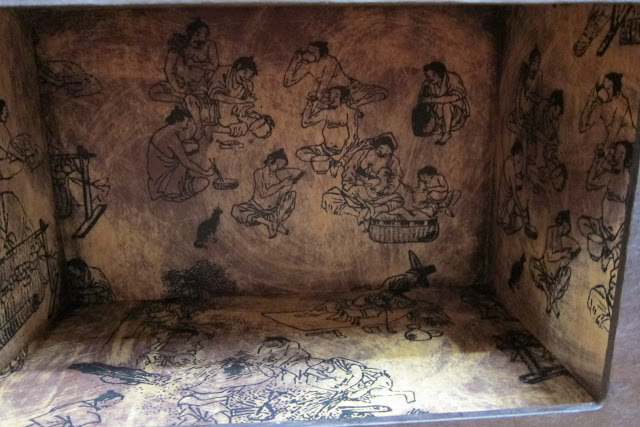 I also covered the inside of the cabinet center with the this hanji paper.  It looks awesome.  I must say the day ended much better than it had began.

We were up late Thursday night and I was need in sleep when our intercom starting buzzing at 7 am.  I jumped out of bed and ran to it to find that it was the management office button that was buzzing.  I pressed it and immediately heard a man’s voice saying “Yeoboseoyo.”  I answered in English and he rattled off a bunch of Korean to me.  I told him that I didn’t know in Korean and that I was an American.  He talked for a few more sentences and poof he was gone.

I was awake by that time and then the same thing happened again at 7:20 am.  The management office doesn’t open until 9 am and our relocation agency that would help us in these situations also does not open until 9 am.  He called a total of four times with me wondering if the building was on fire or the elevator didn’t work.  I even called Rocketman which is what I do in these cases and he didn’t have any solutions either.

Then at 8 am, the doorbell rings and I can see it’s a security guard at my apartment door.  I was still in my pj’s so I ran into the bedroom to throw on some clothes.  Meanwhile, he starts pounding on my door scaring me half to death.  I grab my cellphone and call Rocketman and I tell him to grab the nearest Korean co-worker.  So I have a Korean on the line when I open the door.

The guard starts talking and I hand him my cellphone.  He explains to Rocketman’s co-worker that there have been complaints in my building about the intercom not working properly and that someone would be coming to the apartment to look at it.  Rocketman’s co-worker explains that to me and we hang up.  The security guard puts out his hand to shake mine which I have never had a Korean do and when I placed my hand in his, he proceeded to crush my fingers in a deathgrip.  I jerk my hand from his yelling, “OUCH” and off he went.

But now I am steaming and when 9 am rolls around I call Jennifer at our relocation agency who is also a dear friend.  She is shocked and can’t believe what happened.  She calls the management office who was unaware anything had taken place and they would call her back after investigating my complaint.  Jennifer told me it would probably be sometime that afternoon.

Jennifer called me about a half hour later and the management office had said that the guards had denied every contacting me.  She insisted that it did happened and to get to the bottom of it.  They called her back saying that now the guard did admit calling me at 7 and several times but he denied ever shaking my hand.  He insisted that never happened.

By then my other Korean friend, Hannah, called to say hi and I gave her the whole story.  She was beyond angry and called Jennifer who than called the managment office and gave them an earful.  Hannah and Jennifer also gave me an earful about opening the door even if it was a security guard.  To be honest, but that time I wasn’t thinking clearly and with him pounding on the door, I really thought he probably had a master key and would come in anyway.  I have heard of this happening to many over here.

It ended with a big apology from the management office (so what) and a promise from me to Jennifer that if ANYTHING strange happens during her non-working hours to call her no matter what.  She says she always has her phone on and with her.

The thing that made me the most upset was not the early hour wake up calls but that fact that he lied about it and repeatedly.  It stupid, just admit you made a freaking mistake.  The managment office said I should never had gotten notified that early unless there was a fire or another serious emergency just like I thought.  But lying is something I hate most and to be basically called a liar myself still has me upset today.  While would I lie?  Really, come on we are all adults and make mistakes.  This was also coming off of my 5 hours perm the night before so I was not in the best of moods anyway.

But hanji class magically made me forget all I had experienced the past few days.  I love how crafting can do that for you.  It really does for me and I’m thankful I have it in my life.  We ended up having a fantastic weekend which I will blog about tomorrow.  We got to meet Sarah’s SeJin!!!