Although geologically stable with no traces of volcanic murmurings today, the Korean peninsula was once a tectonic hotbed of activity. The remaining legacy of that era is a nation criss-crossed with mountain ranges to such an extent that only 2% of the country has sufficient lowlands to support permanent crops. 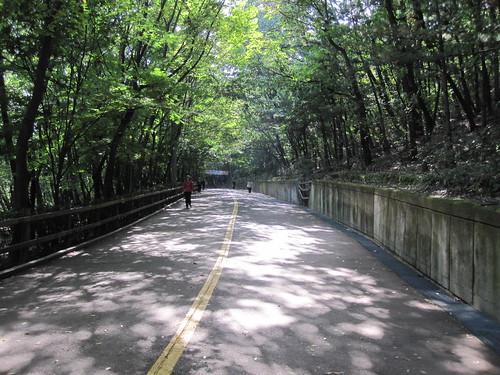 But for the common plebs who hold less interest in such non-newsworthy affairs, this just means that there are lots of mountains to climb.

Although geologically stable with no traces of volcanic murmurings today, the Korean peninsula was once a tectonic hotbed of activity. The remaining legacy of that era is a nation criss-crossed with mountain ranges to such an extent that only 2% of the country has sufficient lowlands to support permanent crops.

But for the common plebs who hold less interest in such non-newsworthy affairs, this just means that there are lots of mountains to climb. 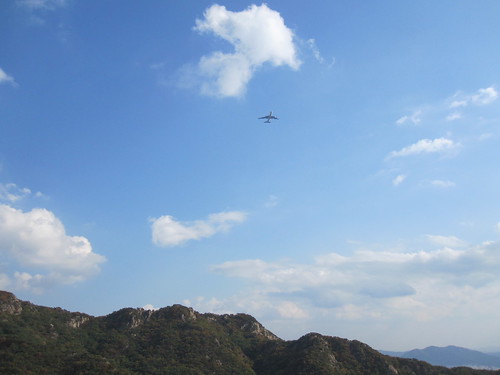 Our professor, like most Koreans of the sterner generation, often sings the praises of a good hike in the mountains. I myself quite like hiking also, having done a fair bit of it in the Flinders Ranges as a young lad. It’s a good way to catch up on conversation, in between gasps of mountain air. 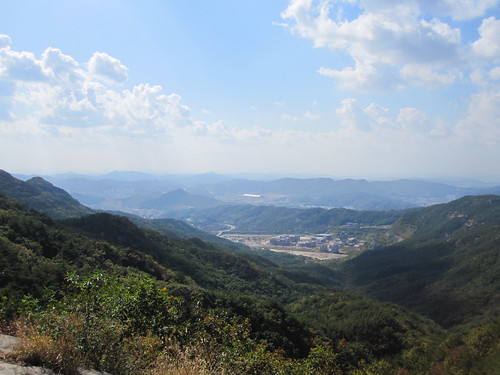 Gwanaksan is the mountain lying behind the Seoul National University campus. It’s name literally means ‘Mountain of the Hat-Shaped Peak’, because a gwanak is a traditional Korean hat that apparently Gwanaksan resembles. Although it lies right in the middle of metropolitan Seoul, the urban sprawl has gone around, instead of over it. 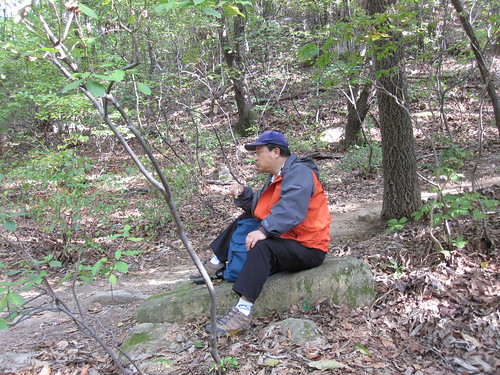 Here’s Professor Ingyu Hwang, having a rest before contemplating a dash to the summit. He’s an interesting chap, although in Korean culture I wouldn’t be allowed to refer to him as a chap or a fellow or any such word. Professors in Korea are revered as superior forms of the human condition, a cultural curiousity I have yet to fully acknowledge. 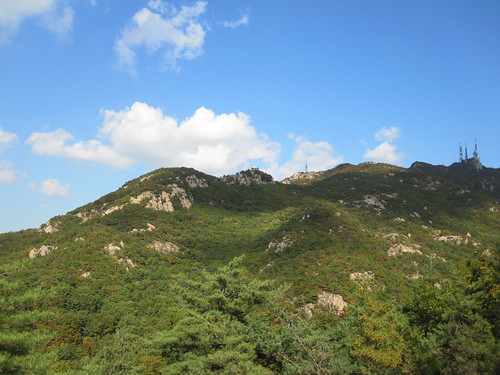 The weather was starting to get a little chilly, but the views were worth getting out of bed for. These photos are much clearer than my eyesight was on the day. I’m often spending the days staring at tiny tubes filled with liquids and writing miniature labels on things, so my eyesight is going a bit funny. I’ve gotten so used to writing small labels, I can put a whole bunch of information on the lid of an Eppendorf tube, which is only slightly larger than a pea. 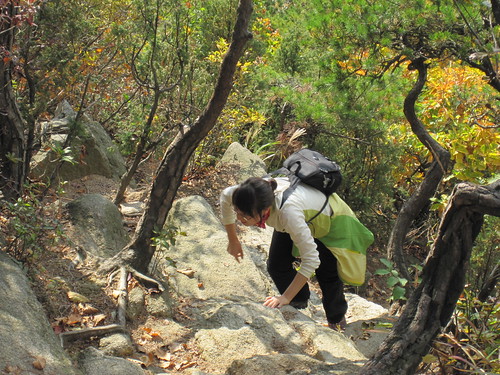 Here’s Se-Kyung, scrambling her way up the precipice. Se-Kyung is a pleasant lab member who is only 2 weeks away from graduating in her masters degree. Masters degrees in Korea are two years, while PhDs are usually at least four. 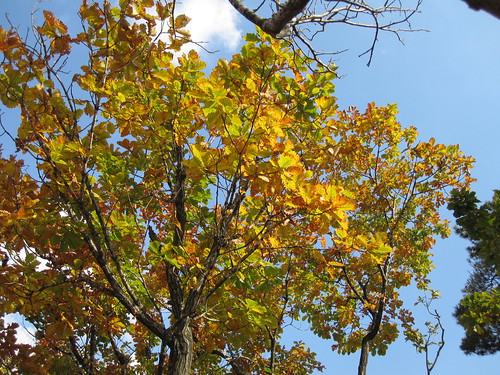 Because I spend a lot of my time cutting up leaves and putting them on microscope slides, I tend to view the autumn colours a little too analytically. The same problem occurs when I eat leafy salads – I become fixated on the vein patterns. I also once knew a dental student called Tina, and I always wondered if she couldn’t help but indulge in a brief inspection whenever someone smiled at her.

In Korea, they call the condition ‘job disease’. 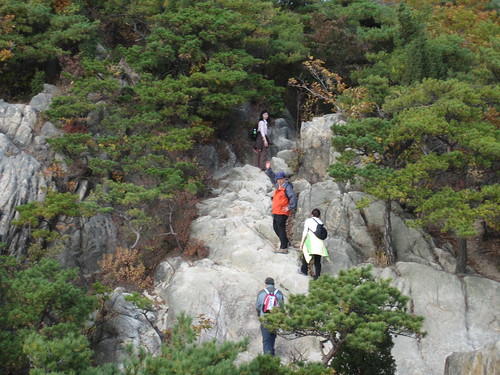 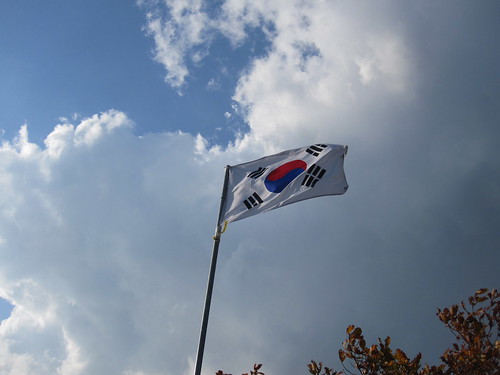 And after hiking for 3 hours we found a nice little taegukki at the top. I’m a fan of the Korean and Australian flags, because there’s a lot happening on them. Some flags only have a couple of different colours, or a stripe. Which is fine, also. 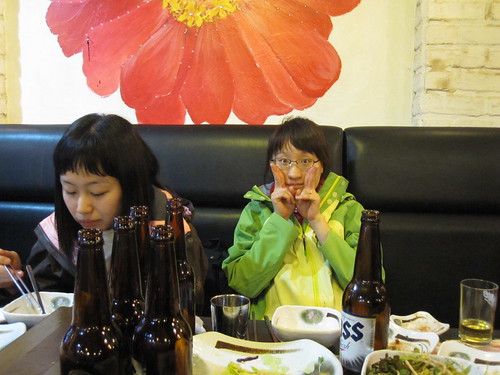 After a day up and down the mountain, we went to Bangbae district to eat barbecued beef. Whenever I take a photo of Se-Kyung, she either tries to avoid the camera, or does a little pose like this. It’s an amusingly cartoon-like quality. 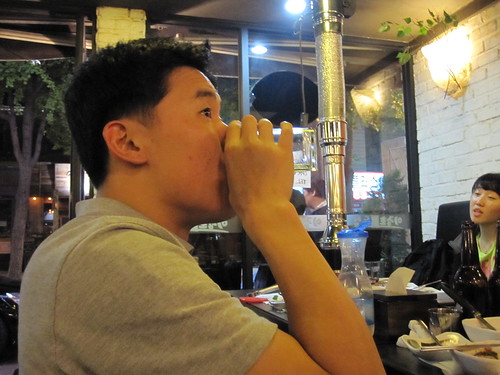 These days I’m not drinking nearly as much as I used to, which is a good thing. Long gone are the days when I could drink on a Monday and sleep it out on the Tuesday. But I’m saving up all of my sobriety for when I graduate, and then I’m going to drown four years of undervalued labour all at once. I look forward to seeing you at the bar when it happens.