The funny thing about travelling is that you often end up making short-lived acquaintances with local people. Then when you look back on your photos after returning home, you remember some of them and think “Hey yeah, that person was pretty friendly.” 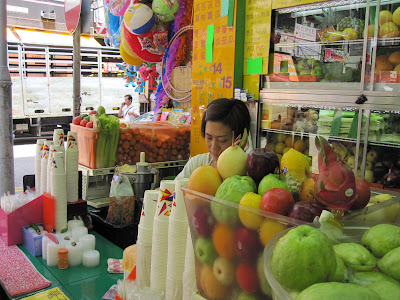 If I ever return to Hong Kong, I’ll track down this juice-lady again. Although she only met us briefly, she recognised us when we came on the second day and gave us a broad smile.

The funny thing about travelling is that you often end up making short-lived acquaintances with local people. Then when you look back on your photos after returning home, you remember some of them and think “Hey yeah, that person was pretty friendly.”

If I ever return to Hong Kong, I’ll track down this juice-lady again. Although she only met us briefly, she recognised us when we came on the second day and gave us a broad smile.

When I really think about it, I probably wouldn’t mind quitting my Ph.D, opening a small juice shop and earning an honest living while giving nice smiles to strangers.

Why does life need to be more complicated? 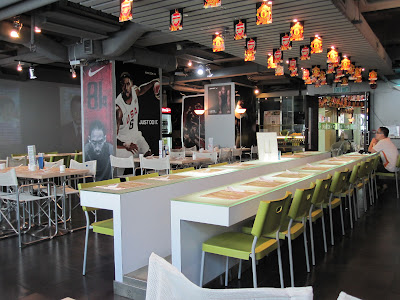 Heather and I found a ‘Sports Restaurant’ in busy Kowloon, which looked a little out of place and inquisition got the better of us. Turns out there were hardly any customers and it had a theme of ‘Sports and Food’. Apparently the owner thought that eating in a place with lots of pictures of sweaty basketballers might catch on. 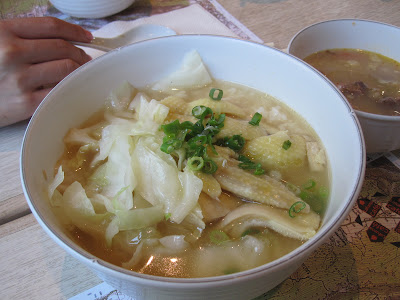 I’m a big fan on Hainanese Chicken Rice, which you can get in Adelaide Chinatown for $5. It’s basically a steamed chicken served on flavoured rice with a side dish of excellently balanced ginger and garlic sauce. The sauce goes together with the mild chicken flavour in a heavenly way.
Having not found it in Korea after 3 years of searching, I quickly ordered something that looked similar on the menu. Heather can speak Chinese quite fluently, but when reading a Chinese menu, she often ends up saying something like “Umm… this one is some kind of chicken. And this one is beef.”

What ended up coming out was instead Hainanese Chicken Soup. Not quite the same, but we were still distracted by the confusing mixed sports theme anyway. 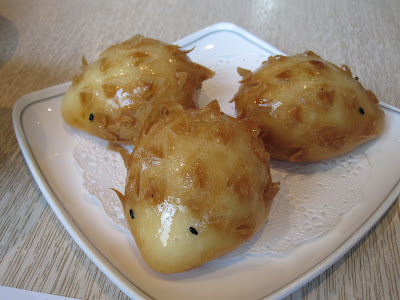 We pointed at some other enticing hieroglyphs on the menu, and out came these little fellows. They were crispy fried and had a sweet filling. 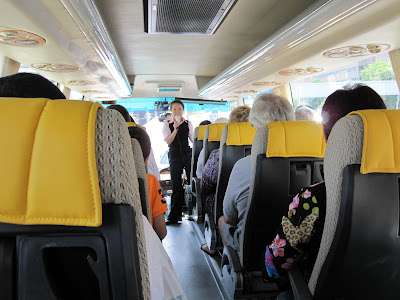 It’s always nice to do your own thing when sightseeing, but the downside is that you might miss some of the major attractions. We decided to go on a guided tour for a day and it turned out to be pretty good.
This lady stood in the aisle of the tour bus and commented continuously on Hong Kong customs and culture while we drove around the city. She told us that Hong Kong gets 28 million tourists per year. That’s a lot of photos.

You could probably collect them all and photosynth them together. 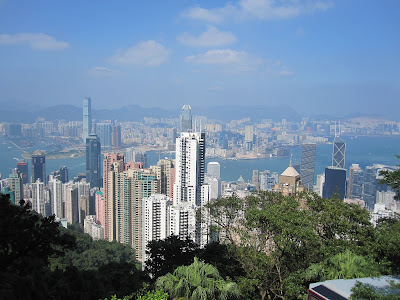 And then there’s Victoria Peak. It’s the highest point on Hong Kong Island and you can get to the top by tram, bus or the longest covered escalator system in the world. Out of all the views I’ve seen in my life, viewing from Victoria Peak on a clear day would have to be one of the most stunning. 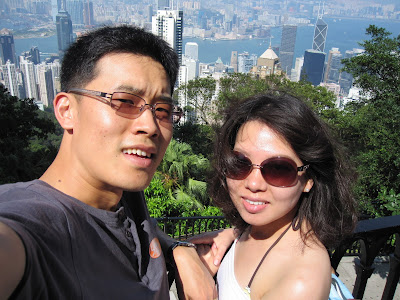 It’s virtually impossible to come here and not take a photo of yourselves. 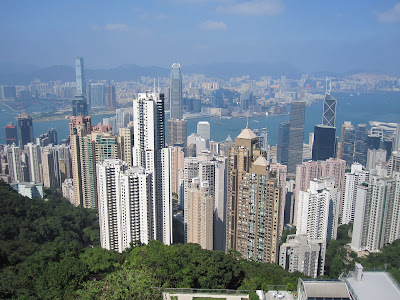 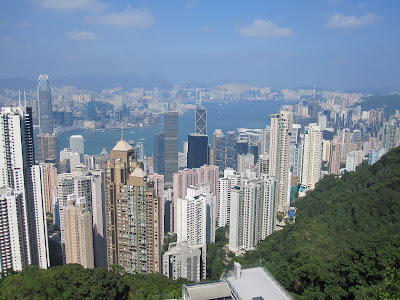 The Hong Kong government decided that the view of the harbour was too picturesque to disturb with bridges, so they didn’t build any. The only cross-harbour traffic is via ferries and three large tunnels that go under the water. Now there’s some inspirational city-planning. 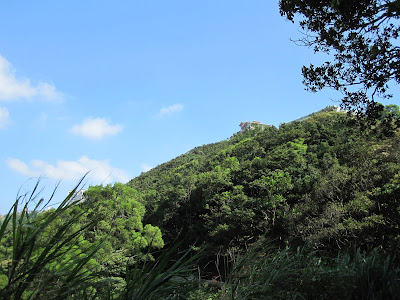 The hills of Hong Kong Island contain some of the most expensive real estate in the world, and therefore attract some of the richest people in Asia. One of these includes Stanley Ho, a billionaire who had a virtual monopoly over gambling in Macau for a good 40 years. Later we found out from our Wikipedia-like tour guide that Mr Ho has a number of estates in the area.

I’m guessing he only bought them so that he can casually say to his friends over drinks “Oh, Victoria Peak… that old place? Yeah I think I’ve got a few mansions up there.” 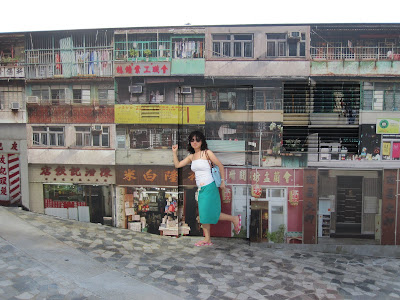 At the top of the peak are a few shops and restaurants. But they are really small, because the altitude up here makes the people grow shorter. Look how big Heather is in comparison. 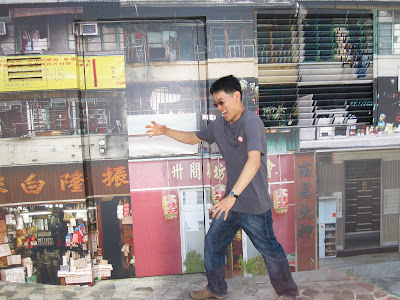 Seeing so many matchbox houses and fleeing masses below me, I couldn’t help but release the carnal Godzilla monster within me.

The photography on the walls was actually put there to cover the ventilation system of an underground building. 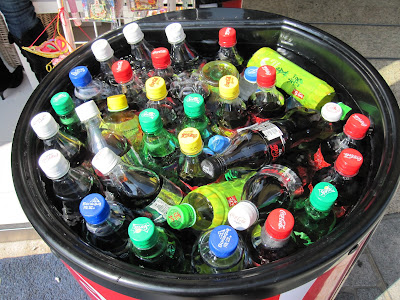 Even though I don’t drink Coke, there’s something comforting about seeing familiar brands for sale overseas. It’s that same old feeling everytime: “Hey, they sell that here too!” 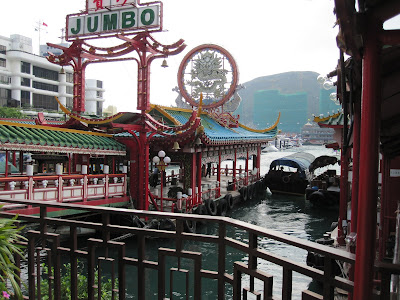 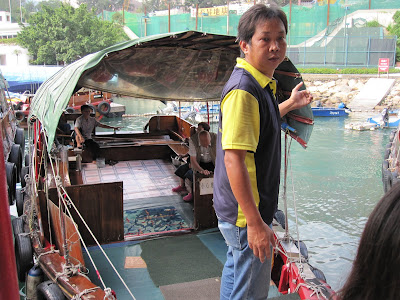 Next up on the tour was a boat ride on the other side of the island. They often have small printing on tourism brochures saying things like “Optional boat ride will cost an additional HK$55, which is not included in the tour fee.”
Finding out about these things later doesn’t disturb me too much, but it is rather difficult to skip out. And then you end up spending more on a tour which at first seemed such good value for money. 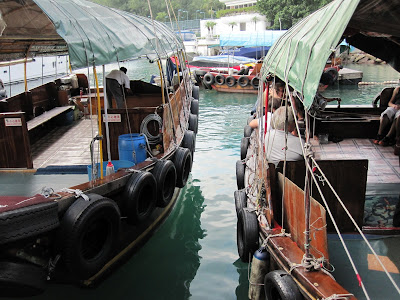 The boats were comfortable enough, and I’ve always liked the idea of reusing car tyres as bumpers. Makes them look friendly.

I wonder who the first person was that thought of it. And I bet you his drinking buddies never believe him. 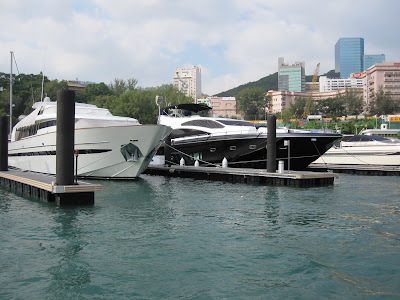 That white yacht on the left is none other than Jackie Chan’s. My claim to fame now is that I’ve seen it.

So I guess that gives you the ability to say that you’ve read the blog of a guy who’s seen Jackie Chan’s yacht. 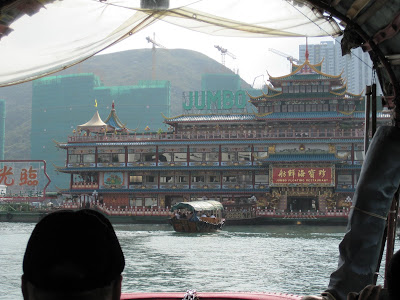 This is the Jumbo Floating Restaurant, a renowned fine-dining destination on the island. Tom Cruise once ate here. 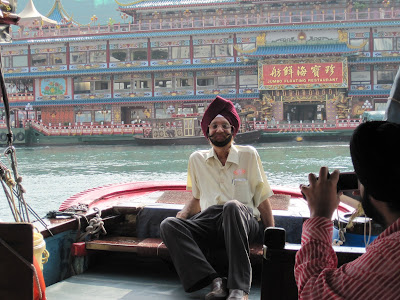 More intriguing to me than the fact that I had just seen the Floating Restaurant That Tom Cruise Once Ate At – was this friendly Sikh. We never found out his name, but he spent the day smiling at us and generally contributing to a friendly atmosphere amongst foreigners. 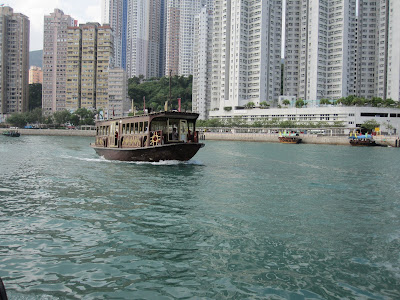 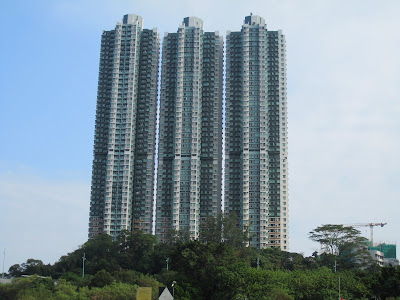 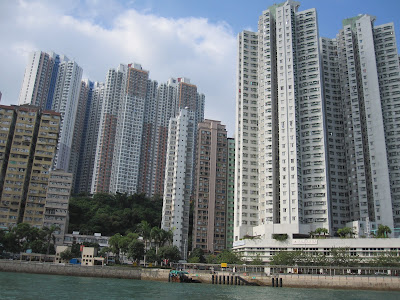 We chugged along the canals for a good 30 minutes. High rise apartments are often aesthetically displeasing creatures, but I still find something oddly compelling about them.

Monuments to the monotony of the middle class. 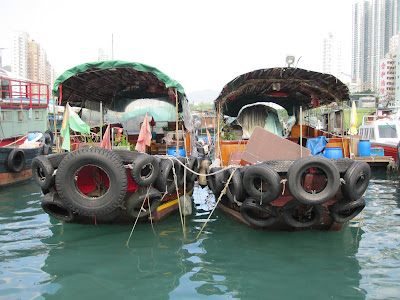 Some of the fishermen in the canals live on their boats in moored groups. Wi-Fi access is sweeping the population. 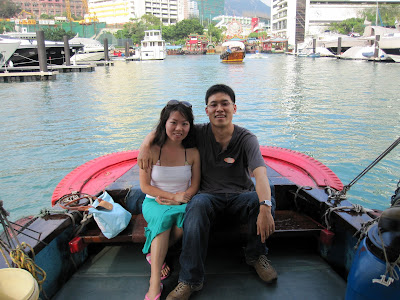 Here’s us, smiling for the blog readers. 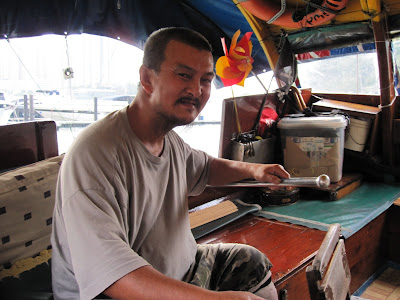 This was our boat operator, who could speak very basic English. As we were passing fishing boats along the way, he would point and say things like “Look. See. Fishing.”
Short, sweet and effective.

Oh and also, I hope you’re enjoying the Wikipedia-style links I’m including this time around. Not sure if I’ll keep it up though.