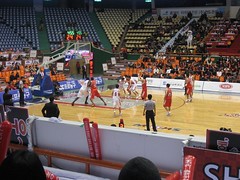 I’ve never been to see a basketball game before; it’s not very popular in England. So I jumped at the chance to see a game in Busan last Saturday afternoon, where judging on the crowd turnout, it isn’t very popular either. Which is a shame, because while it doesn’t have the epic feel of 30,000 people crammed into Sajik Stadium for a baseball game, being seated closer to the action allows for a much more personal experience.

I’ve never been to see a basketball game before; it’s not very popular in England. So I jumped at the chance to see a game in Busan last Saturday afternoon, where judging on the crowd turnout, it isn’t very popular either. Which is a shame, because while it doesn’t have the epic feel of 30,000 people crammed into Sajik Stadium for a baseball game, being seated closer to the action allows for a much more personal experience.

The game we’d decided upon was local team from the Korean Basketball League (KBL), Busan KT Sonicboom (formerly Busan KTF Magic Wings, formerly Busan Korea Tender Maxim, etc.) versus Seoul SK Knights at the Sajik indoor stadium (‘사직체육관’). In addition to this representing Korea’s two biggest cities, as the names and ownership suggest, it also represented Korea’s two biggest telecoms companies – KT and SK. Quite what the significance is of associating a mobile phone company with the name ‘Sonicboom’ is anyone’s guess, but I feel it’s telling me to hold their handsets further away from my ears in future.

On arriving and passing the Swine Flu body heat detection units at the entrance, we were handed uninflated clapper tubes which we proceeded to try and blow up with decreasing levels of success while we waited for the rest of our friends to arrive. A Sonicboom employee eventually took pity on me and gave us a hand pump. There were mumblings of positive discrimination within our party in the belief that had it not been for their embedded foreigner, no help would have been forthcoming. We were soon providing a service to others while the somewhat disturbing looking Sonicboom mascot hovered around nearby. 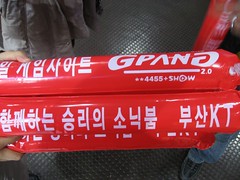 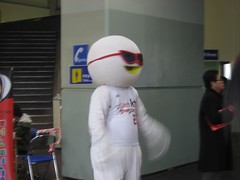 Our friends were barely in time, meaning as we hurriedly entered the indoor stadium the national anthem was already playing. There was much covering of breasts with hands. Around fifty police stood proudly to attention in the corner of the stadium. Later I began to wonder if there was around one officer for every five people, because most of the seats were empty. Despite this, as we reached our seats there appeared to be a couple of people in them, and as ticket seating numbers were compared and our squatters evicted, a Korean fan in the row behind us implored us to sit down, although unfortunately for him my companions were occupied and I tend to filter out Korean unless I’m concentrating. He finally broke into an English “Please sit down! Please sit down!”, proving that despite the hagwon educations, most Koreans actually can speak some English in an emergency.

While the attendance was uninspiring, we were sat in the most populated area of the stadium – and apparently what we lacked in numbers, we more than made up for in volume. In fact, during the game, the ‘Please sit down!’ guy behind us yelled his lungs out in a way I haven’t heard since I last watched a samurai epic. Just to make sure though, we had our very own crowd motivator who would dance around in front of us holding various signs imploring us to chant players names and words at appropriate moments – 디펜쓰! Defence! (Or Dee-pen-sue rather, which is shorted simply to a repeating chant of ‘Dee-pen!’). Unfortunately, inspiring and entertaining as this was in its own right, these antics did obscure some of the early action. 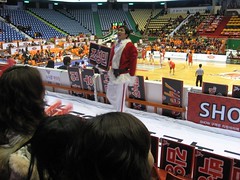 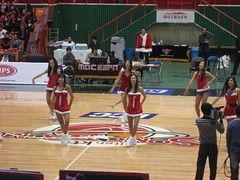 Busan began to trail Seoul by several points, and the lead showed every sign of widening, but this did nothing to dent the enthusiasm inside the stadium. Our motivator bravely worked his way out into the venue’s hinterlands, and even danced with the worryingly young-looking cheerleaders in santa uniforms at half-time. Sponsor Outback Steakhouse threw vouchers into the crowd and Papa John’s went one better by handing out pizzas. I didn’t know they had Papa John’s in Korea – now I know there’s one in Seomyeon I feel a pilgrimage coming on. Contest winners were invited to shoot hoops for prizes, but nobody won the motorbike. Inevitably, there was ‘kissing time’ – where – hopefully – a couple in the audience would be singled out to kiss for the benefit of the stadium screen. Given the lack of people, there seemed quite a high chance of being picked – the foreigner’s curse in Korea – so my wife put her Swine Flu mask on in the hope that it would be too cruel of them to choose us in those circumstances. 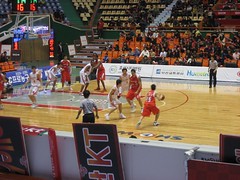 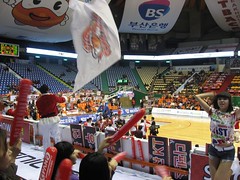 As the time ticked away and Seoul’s victory seemed more certain, our motivator returned with a cheerleader who’d had a change of outfit, although I was even less sure about this than the previous one. With 22 seconds left on the clock, a rapidly improving Busan unexpectedly took the lead by a point and held it. The crowd noise reached a crescendo as Seoul missed their last shot, and I may have contributed to it.

I ended up feeling a little sorry for all concerned. The game was exciting and the atmosphere good, leading to an experience I’d certainly like to repeat. But if this turnout was the best a city of 3.6 million could muster, one must conclude that the people here don’t seem terribly interested. I’m told there was a time ten years or so ago, when it enjoyed a brief heyday, but people moved on – possibly as they did with football (soccer) after the World Cup was held here. If it’s still here in future, we’ll be back – although given how often teams change their names here – the Busan team will probably have a new title next time we’re here.