No, not because the dancer is 29 year-old Park Ga-hee (박가희), by coincidence leader of the girl band After School (애프터스쿨) whose songs I am translating at the moment. And not because she is by no means just another manufactured K-pop idol either, once literally penniless on the streets of Seoul after running away from home. Hell, not even because of her great body.

Rather, it’s because she’s sweating.

No, not because the dancer is 29 year-old Park Ga-hee (박가희), by coincidence leader of the girl band After School (애프터스쿨) whose songs I am translating at the moment. And not because she is by no means just another manufactured K-pop idol either, once literally penniless on the streets of Seoul after running away from home. Hell, not even because of her great body.

Rather, it’s because she’s sweating.

Yes, sweating. Because as I first highlighted over 2 years ago, Korean women generally prefer passive means of losing weight to active ones like exercise. Indeed, even the ones that do attend gyms rarely seem to exert any actual effort while they’re there, and I’ve seen less than a handful dripping with sweat while on a treadmill.

A gross over-generalization? Actually, I very much hope so, and admittedly not having gone to a Korean gym myself since 2004, then I’d be happy to learn that things have changed since. But my post did seem to strike a chord with readers’ own experiences back in 2008, and in turn the underlying attitudes to exercise that they demonstrated were corroborated by one of the few English language studies of the subject: “Content Analysis of Diet Advertisements: A Cross-National Comparison of Korean and U.S. Women’s Magazines” (Clothing and Textiles Research Journal, October 2006), by Minjeong Kim and Sharron Lennon. With apologies to long-term readers for my frequent references to it, but it’s worth (re)highlighting some parts here to remind ourselves just how unique the Fat Down (팻다운) commercial really is:

In his study with Korean female college students, Kim (1998) found that a predominant portion of respondents engaged in dieting for appearance rather than health, and a majority of respondents had previously engaged in dieting. The most common method of dieting was to restrict caloric intake, whereas a similar study with American female college students found that exercise was the most common dieting method among American women (Grunwald, 1985). (p. 350)

Granted, those are old studies, but then ponder the fact that one question I posed to my university students for their final vocal tests this week was “What are your plans for the summer?”, and fully 20 out of 55 of the women said they would be dieting to wear a bikini on the beach. Which not only surely reflects an obsession in itself, but notably none said merely “losing weight” either, and definitely not “exercising” or “working out” (by way of comparison, 1 out of 65 guys said he would be working out). Hence the tests took rather longer than expected, as I felt compelled to step out of my remit as an English teacher and point out that none of them needed to lose weight whatsoever, that Korean women were already the slimmest in the OECD, , and that could they at least consider maybe exercising rather than dieting?

And there are plenty more anecdotes like that available in that post from 2008. But I like to be above passing on mere anecdotes these days, so consider some of the empirical evidence provided by Kim and Lennon instead:

The percentage of diet ads in relation to total ads was far greater in Korean women’s magazines than in U.S. magazines. (p.357)

A current article in one Korean newspaper (“Half of High School Females Are Not Qualified,” 2002) reported that more than half of Korean high school women suffer from an anemic constitution caused by malnutrition because of dieting. Also half the prospective blood donors from several high schools were not qualified because of deficiencies in nutrition. (p. 357)

Content analysis of the types of diet products/programs indicated that there are a variety of diet products easily available in Korean magazines….Diet pills, body attachments such as a diet belt, and oriental diet herbs were three of the more frequently advertised diet products in the Korean magazines sampled. However, none of them was reported as being clinically approved….Korean magazines promote more passive diet methods than active diet methods. Ads for passive diet methods such as diet pills, massage, aroma therapy, diet crème, or diet drinks that one must take, put on the body, or smell to lose weight were more prevalent than diet ads requiring one’s active participation such as exercise equipment or aerobic videotapes. Passive dieting ads reinforce the idea that buying a product will solve weight problems with no effort on the part of the user. (p. 358)

See here, here, and here for examples and further discussion of such advertisements, and you may also find these electric breast massagers and apple-hip seats interesting. Meanwhile, shame again on the Brown Eyed Girls…but please don’t take this post as an endorsement of Fat Down myself: I know nothing about it, and certainly do not know its ingredients or effectiveness. As you can see above though, I do at least recall that Jung Da-yeon (정다연) also endorsed it, a woman in her early-40s who became famous a few years ago for being a momjjang ajumma (몸짱아주마), literally a “good body married woman”.

Update – Related, I like the no-bullshit attitude of this advertisement for a cosmetic surgery in yesterday’s Busan edition of Focus newspaper (p. 6), which reads: “How much will you have to drink before you’ll get a V-line?”, a reference to this drink’s supposed ability to give you that face shape. 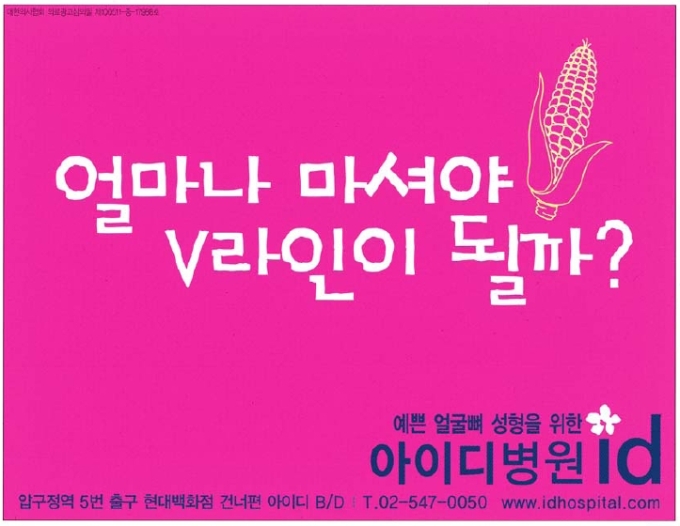