“Don’t you miss your family? Aren’t you homesick?” These are in the top 10 of questions everyone over here asks me, and while it’s nice to know someone is concerned about my well-being, it makes me wonder if I’m the odd one out for not being homesick. This isn’t new; I’ve been wondering about this same topic almost since I first arrived in Korea.

“Don’t you miss your family? Aren’t you homesick?” These are in the top 10 of questions everyone over here asks me, and while it’s nice to know someone is concerned about my well-being, it makes me wonder if I’m the odd one out for not being homesick. This isn’t new; I’ve been wondering about this same topic almost since I first arrived in Korea.

“Now, in the “Counseling Booklet” that Epik has provided me with, they give a very thorough explanation of the various phases of culture shock. The first phase? The “Honeymoon Phase”. The booklet describes this time as “the period just after arrival in a new country…everything appears to be exciting and novel. The individual rarely finds any problems with the new country and may feel euphoric. Many people believe that the new country is flawless.” Ever since I read that passage last week, it’s been floating around in the back of my head. Is my love affair with Korea going to fade into the more negative aspects of culture shock? Am I just romanticising things that, in a few months, I will realize I secretly hate?”

Well, I’m coming up on three years, and while the honeymoon phase is over, I can honestly say that I don’t often feel homesick, and when I do, it’s not crushing. Instead of ruining my day, it can be an almost enjoyable melancholy or nostalgia. Anyways, since I know that homesickness is a problem that many people deal with, I thought I’d write about my own experiences and how I fend off homesickness. Now, I can’t say if any of these will be helpful for you, or even possible, but this is how I, personally, stay so positive in Korea.

My life since middle school has been a long string of getting out of wherever I was. Getting out of middle school, getting out of high school, out of my hometown, and finally out of Seattle, where I went to college. Why a person might not enjoy life in a small town is pretty obvious. With a graduating class of 100, it didn’t leave many options as far as friends went, and with a dwindling population and zero job prospects outside of barista, drug dealer, or starving artist (or the triple threat combo) …well, I didn’t waste any time shipping my own self off to college.

After graduating from the University of Washington with a BA in English and the newly kindled desire to teach, I made the big dumb mistake of taking a year off to “rest”. Seeing as neither me nor my parents are independently wealthy, I couldn’t just sit around for a year reading Marvel comics and drinking coffee, as much as that appealed to me. I needed a job, and with a degree in English from a great school, I was able to get a totally relevant job in the service industry. By relevant I mean totally irrelevant and by service industry I mean a tiny cafe that made crepes. As I was one of the only employees not in school at the time, I ended up going months without a full day off, working 50-60 hours a week, and still barely having the money to cover rent and life expenses. Minimum wage is just so awesome like that.

I was, in a word, miserable. It doesn’t help that the weather in Seattle shares most of its characteristics with a damp sock. Even when things are going well in your life, unless you really enjoy overcast gray weather, it’s hard to stay positive during the interminably long Seattle winters. And springs. And falls. And sometimes it stays cloudy even though summer, because the other 9 months just weren’t enough!

What I’m saying is, probably the biggest reason for my lack of homesickness is that…well…there honestly isn’t much for me to miss about home. Yes, I miss my friends and family, but with things like Skype and Facebook and Kakaotalk and email, it’s easy to stay in touch on a level that keeps me from feeling the distance. Maybe this isn’t the best kind of advice to give, since it boils down to “hate your home” and I know that’s not something that most people are going to be able to do. I guess I’m just lucky to have had such a terrible time before I moved.

As they say, idle hands are the devil’s…instruments? Playground? Idle minds are the devil’s gymnasium? Look, I’m no expert in old sayings but you get what I mean. I think one of the biggest challenges, especially when you first move to a new place, is keeping yourself busy. Everything is going fine, you’re feeling good, and then suddenly the weekend comes and you’re on your own for two whole days. Personally, I start to feel down in the dumps when I don’t have a lot to do, no matter where I’m living, but I feel like this is something that really matters for people who are trying to live in a foreign country. It’s easy to feel isolated, and if you’re just sitting around in your tiny apartment, that isolation only intensifies. So, instead of spending the whole time laying on your bed watching the English language movie channel and moaning about how much you miss your family/Taco Bell/good cheese, get your butt outside and do something!
“But I don’t know Korean!”
No excuse! Just go for it! Want to order food? Just point at something and hope for the best. Ursula the seawitch had it right: never underestimate the importance of body language. When I first got to Korea I was limited to “Hello” and “Thank you” as far as speaking went, but I was still able to joke with a coworker about mosquitoes, entirely through sound effects and acting.

This bit of advice is harder to follow the smaller your town is. Life in the middle of Seoul is about as similar to life in the rural country village as my students are to actual humans. Which is to say, not at all. But hey, this country is tiny. Do some traveling! Explore your (albeit) tiny town! Take up a hobby. Join a gym and get super buff (then teach me your secrets).

Lastly, and this is advice for pretty much everyone in any type of situation, try to find the positive part of what’s happening to you. Bad thing will happen. Annoying things will happen. That’s to be expected. Taxi drivers will try to cheat you on your fare. Classes will be changed and cancelled with no notice. Your coworkers will be passive-aggressive. Your students will make you cry. That’s normal, and it sucks.
But the way I see it, focusing ONLY on the things that suck just makes them seem bigger. I really like the way Simon, from the Eat Your Kimchi folks, puts it in a blog post about staying positive:

“I could be upset about dealing with our landlord, buuuut I have a soft kitty here[…]I could be upset that a project I had been planning fell through, but look at that sunset. Once you realize that all things are of equal significance[…]then the playing field is levelled. Good experiences and bad experiences have the same weight, so why not put my energies into experiencing the positives?”

I’ve always hated the saying “it takes more muscles to frown than to smile” because a lot of time, it’s utter BS. Sometimes it’s hard to smile. Sometimes pipes burst or cars break down or things just Go Wrong for seemingly No Reason. There’s nothing you can do about that. It already happened. The best thing to do is to find the part of your day that didn’t suck. Was there one funny thing a student said? Did you eat the most delicious strawberry ever? Did your mom send a photo of her new poodle? Focus on that. It takes practice, but trust me, it works out better in the long run.

I think this kind of thinking is especially important when you’re living in South Korea, and probably any foreign country. Sorry Korea, but you’re pretty…racist? I hate to pull out the R card, so maybe we can stick to xenophobic? Unaware that there are other types of people out there and that’s okay? Whatever you want to call it, it’s hard to be the one different person in a sea of similarity. I never realized how diverse the US was until I moved to Korea. As an American over here, as any type of foreigner I’m sure, it’s easy to feel victimized or singled out. Any negative experience can be viewed through the lens of “it happened to be because I’m not Korean.”

Sometimes, that’s true. Other times, it’s not. All I ask is that you take a second to consider if the taxi driver didn’t stop for you because he hates Americans, or if maybe he just didn’t see you. And even if its the former, will knowing that somehow make you happier? Personally, I know it won’t. Even if I have to lie to myself once in a while, I’d rather assume the best in order to feel better, instead of assuming the worst and getting bitter. 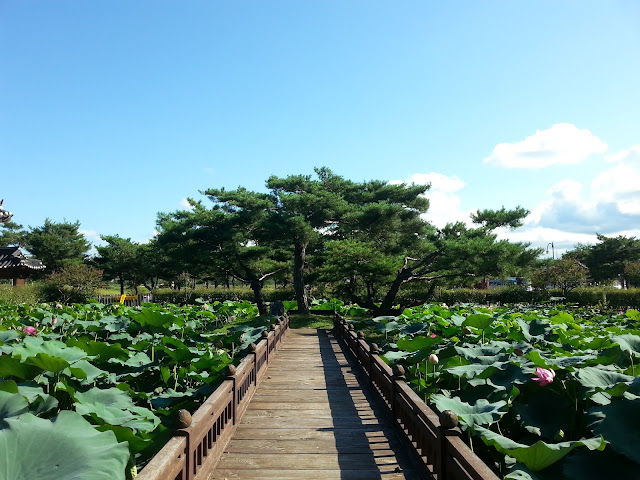 So go out and enjoy life. Experience things, and when you miss friends and family back home, go do something interesting so you’ll have the best stories to tell them when you meet again. Why do you think I’ve had so many adventures?