Korean culture is on the rise: worldwide music and pop culture success, rapid economic growth and some of the world’s biggest and most relevant companies have put Korea on the map in a big way!

As the world becomes more connected to Korea through pop culture and the economy, the Korean language will become increasingly important.

And the best way to start learning Korean is to learn to read Hangeul, the Korean alphabet.

That’s where this post comes in. It teaches you how to read the Korean alphabet!

Did you know that there are fewer Korean characters than there are letters in the English alphabet?

Korean has 14 vowels and 10 consonants.

Korean culture is on the rise: worldwide music and pop culture success, rapid economic growth and some of the world’s biggest and most relevant companies have put Korea on the map in a big way!

As the world becomes more connected to Korea through pop culture and the economy, the Korean language will become increasingly important.

And the best way to start learning Korean is to learn to read Hangeul, the Korean alphabet.

That’s where this post comes in. It teaches you how to read the Korean alphabet!

Did you know that there are fewer Korean characters than there are letters in the English alphabet?

Korean has 14 vowels and 10 consonants.

Unlike Japanese or Chinese, which have thousands of characters and each can have 10, 15 or more strokes, the most complex Korean character has only five strokes.

On top of this, Korean has a grammar structure that can be mastered by understanding some basic rules.

This makes Korean a great language for rapid learning, and it all starts with knowing the Korean alphabet – the basic building blocks of the language.

This post makes use of psychological techniques which are designed for more rapid encoding and memorization of the characters.

It covers the how, what and why of the Korean alphabet, and it is the only guide of its kind.

Go through at a brisk pace, but ensure proper encoding and memorization along the way. This post is actually a snippet of a full “cheat sheet” guide we have created called the 90 Minute Challenge. 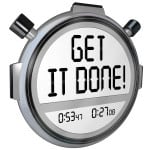 At the end of the entire challenge, the ultimate test is being able to read nine words in Korean. If you like this preview, you can sign up to get the full challenge for free.

Are you ready to get started? Let’s do this thing!

The Korean language has both consonants and vowels just like English.

Let’s learn the consonants to start.

First, let’s take a look at the English alphabet. Instead of looking at the actual letters, let’s just look at the sounds they make.

In doing so, we can find the closest equivalents in Korean so that we can start to make associations.

The rest of the sounds exist in the Korean language; however, the Q, W, X and Y sounds:

So let’s take these letters out too.

Finally, let’s remove the English vowels, since we are first focusing on the consonant sounds.

How many are left in red?

But we can group C and K together, since in English, they make the same sound.

Let’s take a look at those 12 first. Since we’re learning a new language and have never seen these shapes before, it will be very difficult for us just to memorize them. Therefore, we need to ‘link’ them to something already in our minds in order to create an association.

Let’s do this using a visual learning technique to associate the new characters with pictures and sounds we already know.

The first letter of the English word in the picture has the same sound as the Korean character.

This will help to start to create the associations.

The character ㅂ, which has a sound similar to B in English, looks like a bed with a post at either end.

Make this association in your mind. Write it down and commit it to memory.

Likewise, the character ㄷ could be seem as a doorframe or the panels on a door. Correspondingly, this character makes the sound D.

The Korean character ㄱ has the appearance of a gun and sounds similar to an English G. The same goes for ㅎ(H), which looks like a man with a hat, and ㅈ (J) which could be seen as a jug with a spout at the top.

Next is the character ㄹ, which has 5 strokes and could be compared to the rungs of a ladder. Its sound is most similar to an English L and can be made the same way by pressing down with your tongue.

Finally, there are the characters ㅁ, ㄴ, and ㅅ, which have the sounds M, N and S respectively.

The ㅁ is a sqaure box like a message on a phone or a piece of mail.

The ㄴ points up and to the right like a  compass pointing to the north (and the east at the same time).

The ㅅ is like a seashell or clam, having only two strokes which slightly overlap. 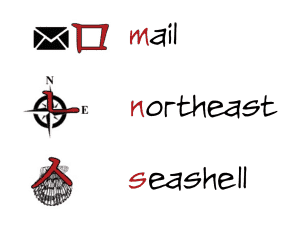 Now, let’s take a look at four of the sounds we just learned.

What if we made them stronger, aspirating as we spoke them? What sound would we then make?

For B, a more aspirated sound forcing out more air would make P sound. How about D? It would result in a T sound. “T”. Try it now.

And G? A “K” sound, like a C or K. In English, these two sounds are very similar. Try saying “I’ve got a cot” five times.

The C is really just an aspirated G.

Finally, if you aspirated a J, it would result in a “ch” sound. Try saying “cheap Jeep” several times and you’ll notice how similar the sounds are.

Let’s match up the non-aspirated English sounds with their aspirated sound pairings.

See how similar these sounds really are? 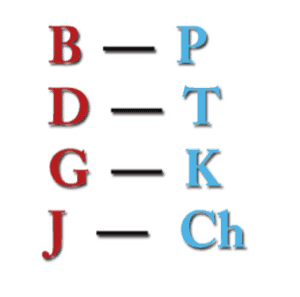 When we do the same in Korean, we’ll see some visual similarities in the characters, which can help greatly for memorization. 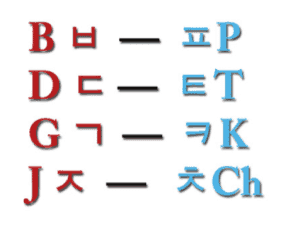 It’s almost as if all we did was add a small line to each consonant to create the aspirated equivalent.

The next four Korean characters are called the aspirated consonants, and are similar in sound to their non-aspirated counterparts.

Let’s make a visual association as well to really drill them in.

The ㅋ (K) could be compared to a key, while the ㅌ, which has a “T” sound, could be associated with teeth (like the ones in your mouth or the teeth of a fork).

Remember math class? I hope so!

What’s that number? Pi! And the Korean character with a similar sound to P looks very similar to the symbol for pi. That makes it easy to remember.

So there we have it. That’s how you learn the Korean alphabet!

But we said there were a total of 14 consonants in Korean, so what are the last two?

One of them is special, because it doesn’t have a direct equivalent to an English letter. Instead, it represents a sound in English.

ㅊ, the character representing the “ch” sound in English (“choose”), looks like a church with a steeple at the top. We can associate it this way, or remember it as an aspirated J (ㅈ) and add an extra line.

You’re already more than halfway toward learning the characters! We wanted to make things super easy for you to print out and study so we’ve created an easy download for you to continue the 90 Minute Challenge toward learning how to read in Korean!

By finishing the Challenge, you’ll be able to read 9 words in Korean within the next 45 minutes, plus you’ll learn an easy technique to learn the rest of the vowels!

To get your 90 Minute Challenge “cheat sheet,” head on over to the sign-up page and we’ll email it over to you ASAP!

That’s all there is to it! We wish you the best of luck in the Challenge, and don’t forget to post your time for a chance to win a scholarship to our paid program!

What do you find most challenging about learning the Korean alphabet? Let us know in the comments below!