Recently, I quit my job as an English teacher and decided to study Korean full-time as a university student.  I had forgotten what it was like to live without a steady income and it didn’t take me long to realize that my habits of frivolous spending had to come to an end. For good.

You see, when you live in Seoul, especially if you’re teaching English, it’s easy to throw around money and not even realize you’re spending it.  Between nights out bar hopping in Hongdae, dinners at upscale restaurants in Itaewon, daily morning coffee at Starbucks, and shopping dates on Garuso-gil, it’s not difficult to blow half of one’s salary in just a few weeks.  Of course, since most English teachers do not pay rent or car insurance or any other “grown up” bills that they would otherwise pay in their home countries, saving money isn’t much of a challenge, either.

Recently, I quit my job as an English teacher and decided to study Korean full-time as a university student.  I had forgotten what it was like to live without a steady income and it didn’t take me long to realize that my habits of frivolous spending had to come to an end. For good.

You see, when you live in Seoul, especially if you’re teaching English, it’s easy to throw around money and not even realize you’re spending it.  Between nights out bar hopping in Hongdae, dinners at upscale restaurants in Itaewon, daily morning coffee at Starbucks, and shopping dates on Garuso-gil, it’s not difficult to blow half of one’s salary in just a few weeks.  Of course, since most English teachers do not pay rent or car insurance or any other “grown up” bills that they would otherwise pay in their home countries, saving money isn’t much of a challenge, either.

Still, for those looking to stretch their dollar- err, won- in one of the world’s most expensive cities, there are some surprisingly easy ways to live more frugally.  It’s just a matter of knowing where to go and how to shop.  Below, I’ve listed some of the ways that I’ve learned how to save money on food, clothing, and entertainment while living in Seoul. 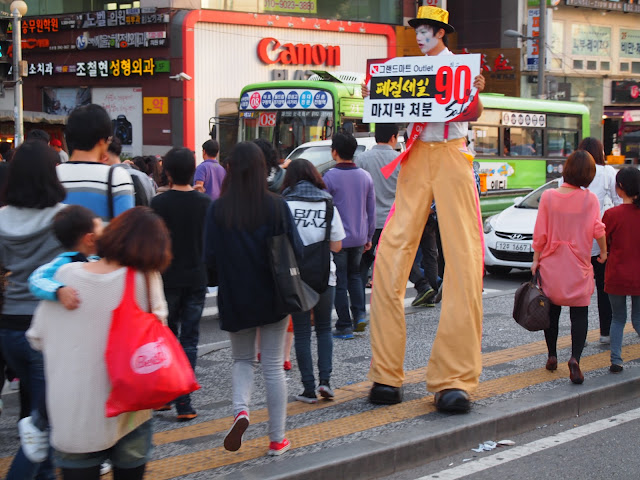 It’s common knowledge that Korean food is significantly cheaper than Western food in Seoul.  But what many don’t know is how cheap Korean food can actually be.  While the average Korean restaurant will set you back about 5,000 won ($4USD) for a main dish and a few sides, university cafeterias offer very basic lunches that include rice, soup, and some veggies for as little as 1,800 won ($1.50USD).  At Sogang University, you can “upgrade” to the professor’s lunch that includes a buffet meal and dessert for just 2,000 won more.  The best part is that you don’t have to be a student to take advantage of these cheap meals.  Just locate your nearest university and grab a spot in line to fill your belly for mere pennies.

When cafeteria food won’t cut it, consider trying out your own cooking skills at home.  Prepare a weekly menu ahead of time and stick to buying only the ingredients that you need.  When you do go grocery shopping, consider buying produce from traditional markets instead of supermarkets or department stores.  The prices are usually a fraction of the cost when you buy locally, and vendors will often give you freebies if you’re a loyal customer.  The fact that you’re helping to preserve the country’s market culture is an added bonus.

There is one exception, however.  Just before closing time (around 9-10 p.m.), supermarkets and bakeries will often have last-minute sales on perishable items that need to be sold before they spoil.  Keep in mind that these foods can be frozen or eaten as a late-night dinner or snack.

Although many people (including myself) require a daily intake of coffee, it can be ridiculously expensive to make visiting cafes part of your everyday routine.  Coffee shops in Korea are far more expensive than those in most Western countries.  Instant coffee, on the other hand, is dirt cheap and can be found just about anywhere in convenient little packets to throw in your bag or keep in your desk at work.

If going to a cafe is necessary, avoid chains and stick to local ones.  Almost all cafes offer some sort of stamp card system so be sure to pick up one of their cards and get it punched on each visit to earn free coffee.  Many restaurants in Seoul offer similar programs to ensure repeat visits, so be sure to ask for one on your first visit.  You won’t be the only one; many Koreans have separate wallets for their stamp cards.

Reluctantly, I have resisted the urges to go shopping over the past year and have instead forced myself to wear what I already own.  Sometimes, though, occasions arise that demand a new outfit or pair of shoes.  In these cases, I often head to the university neighborhoods, where cheap clothing stores can be found on just about every corner.  Ehwa Women’s University and Hongdae are two of the most popular areas for shopping for affordable, trendy wear.  Shirts start at 5,000 won ($4USD) and shoes at 10,000 won ($8USD). 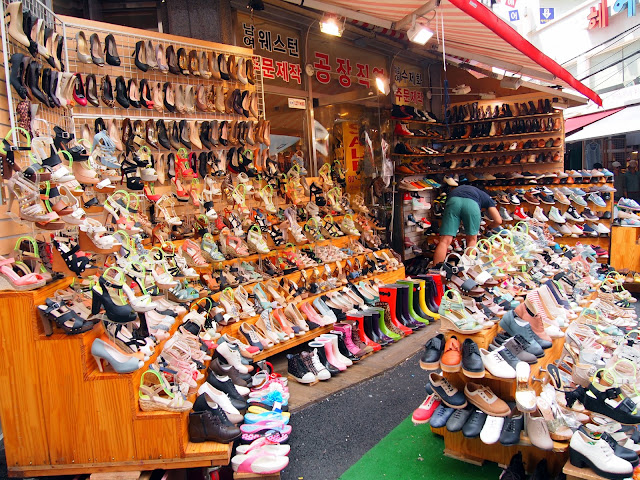 Dongdaemun Market is a bit pricier, but caters to a wider variety of ages and styles, rather than just focusing on trends for twenty-somethings.  Here, shoppers can browse the multi-story buildings and haggle for bags, shoes, and outfits for every occassion.

For toiletries, the franchises Olive Young and Watson’s are excellent places to find good deals.  It’s uncommon to not find some sort of sale on any given trip to these beauty and health shops.  Although normal prices might be somewhat steep, 1+1 sales are the time to rack up on vitamins, shampoo, soap, and deodorant.  It’s smart to check these chain stores frequently for sales on your favorite products.

The competition between Korean cosmetic shops is extremely competitive which is great for the consumer looking for a steal, as there are almost always promotional sales going on.  Look for the shop girls shouting or for the numerous posters in the windows to find out what the daily deals are.  In addition, you can get free samples when you make purchases from these shops (or agree to take a look around). 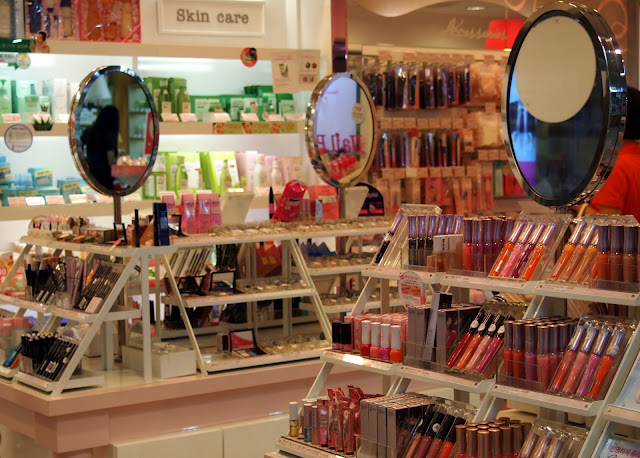 Customers can sign up for free membership accounts at these cosmetic shops to accrue points with each purchase and to be notified via text message of membership days, when products are sold at up to 50% off their normal price.  Shop employees in tourist areas like Itaewon and Myeongdong often speak some English and can assist you when applying for these free programs.

Saving money doesn’t have to mean sacrificing fun. In fact, it’s important to get out, let your hair down, and meet new people from time to time.

If you’re a film fanatic and a morning person, you can take advantage of matinée discounts, which are usually around 5,000won for the first-screening of the day, which is usually before 11 a.m.  Some theaters offer additional promotions on certain days of the week.  Cinecity in Cheongdam-dong hosts a lady’s day on Mondays in which women can purchase tickets for half of their original cost.  All can take advantage of the 50% discount at this venue on the company’s brand day, which falls on the 11th of every month.  Again, don’t forget to rack up on those points. 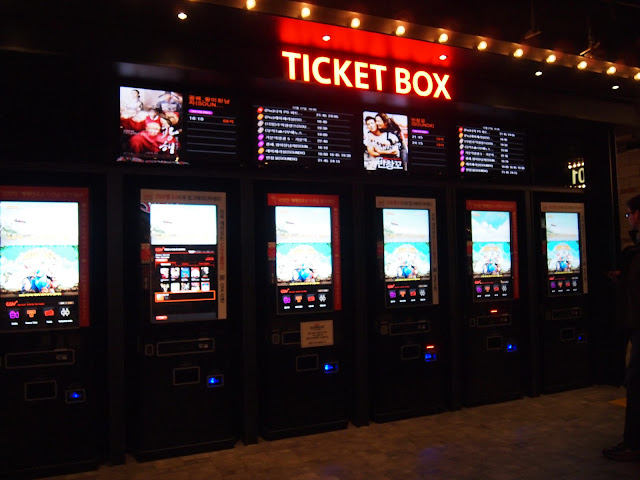 For those looking to watch live performances like Nanta, Miso, and Jump, Rush Ticket offers last minute discounts of up to 70% on performance tickets. The tickets can be purchased only on the day of the show. The tickets are available at KTO’s Tourist Information Center, where visitors can also get tourism-related information and additional discount coupons for products and services offered throughout the city.

If you’d rather hit the nightlife districts, be sure to study up on (and memorize, if possible) Seoul’s happy hour offers, mostly available in Itaewon.  At all other times of the day, it’s best to head back to those university neighborhoods.  Shinchon and Hongdae are both great spots for a cheap night out, but Konkuk University (Geondae) is a lesser-known area packed with cheap pubs and bars and is definitely worth a visit. If you look around, you’re likely to find bars selling draft beer for 3,000 won ($2USD) and cocktails that start at 5,000 won.

Taking taxis can quickly turn a cheap night out into an expensive one, so consider taking the newly implemented late-night buses that include Hongdae, Jongro, Shinchon, and Dongdaemun on their routes.

Finally, there are plenty of things to do in Seoul that are absolutely free.  Explore the hiking trails of nearby Dobongsan or Bukhansan.  Wander the art galleries of Samcheongdong.  Visit the city’s free museums.  Take a walk or shoot some hoops on the Han River.  Find something that you like doing that won’t drain your funds so that you can actually enjoy your time living in Seoul.  After all, saving money shouldn’t feel like a chore.  It should feel like a choice, and a rewarding one at that.  Happy saving!

Do you agree with the suggestions above? How do you save money in Seoul?  Add your own advice in the comments section below.