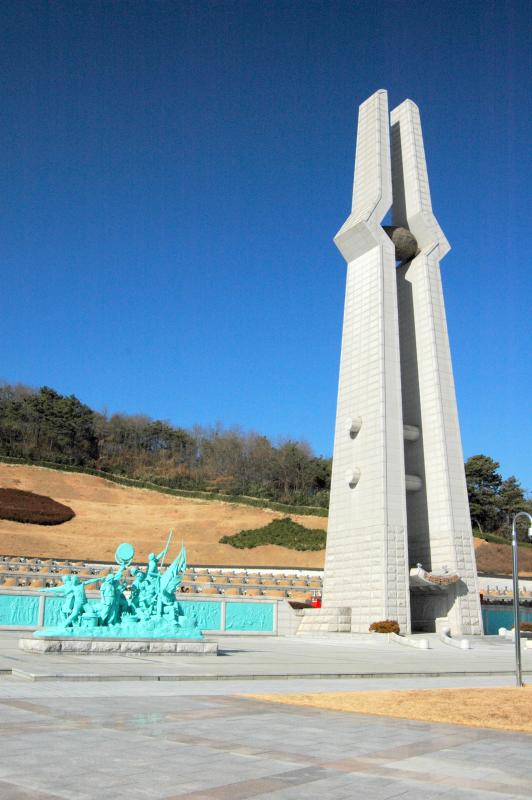 The 5.18 Memorial Cemetary (국립 5.18 민주묘지, guk-rib min-ju-myo-ji) is a reminder of how much a city – and a country – can change in a short period of time. It’s also a reminder of how new Korea’s democracy is. Lest anyone think Korea hasn’t learned from their history, let this be a place to remind them of.

Since literally hundreds of books – and an excellent Wikipedia article – have been written on the Gwangju democracy movement, let’s keep this a short and simple summary of the events at hand.

The 5.18 Memorial Cemetary (국립 5.18 민주묘지, guk-rib min-ju-myo-ji) is a reminder of how much a city – and a country – can change in a short period of time. It’s also a reminder of how new Korea’s democracy is. Lest anyone think Korea hasn’t learned from their history, let this be a place to remind them of.

Since literally hundreds of books – and an excellent Wikipedia article – have been written on the Gwangju democracy movement, let’s keep this a short and simple summary of the events at hand.

Korean president Park Chung-hee was assassinated on October 26, 1979, leaving then-Prime Minister Choi Kyu-hah as Acting President. Martial law was declared, and Choi had little control over South Korea’s army. On December 12, 1979, Chun Doo-hwan and other military officers pulled off a coup d’état. In April of 1980, Chun was promoted to director of the KCIA, or Korea Central Intelligence Agency. By then, student groups and professors supportive of democracy had begun gathering in force to protest the martial law and demand freedom of the press, among other things. On May 15, 1980, 100,000 participated in a protest outside of Seoul Station. Two days later, martial law was expanded to the entire country, political activity was banned, the press was further restricted, and universities were closed.

On May 18, 1980, students gathered outside of Cheonnam University in Gwangju. Around 10am, around 200 students and 30 paratroopers began to clash. The protest moved downtown and grew in size. By May 20th, there were 100,000 protesters, and an unknown number of them were killed around Gwangju station. A local TV station building was burned down after misreporting the news out of Gwangju, while hundreds of taxi drivers supported the citizens by taking some to the hospital or blocking the soldiers’ way. The next day, the protesters had raided nearby cities for weapons, which caused the military to retreat.

On May 22nd, the military had retreated to suburban areas, blocking all routes and communication out of Gwangju. A couple of committees were formed by the civilians of Gwangju, advocating peace and negotiating for the release of people that had been arrested. The military prepared to attack on May 26th, and at 4am the next morning, five divisions converged on the protesters. It’s fairly safe to say there were plenty of dead people.

While the Gwangju rebellion didn’t directly bring democracy to South Korea, it fueled further movements that eventually led to the modern-day democratic country that the world knows today. After South Korea’s first democratic elections in 1987, the National Assembly had a public hearing; in 1996, the politicians responsible were indicted, although their punishments were pardoned the following year. May 18th was made an official holiday in 1997, and the 5.18 Memorial cemetery was made a national cemetery in 2002. 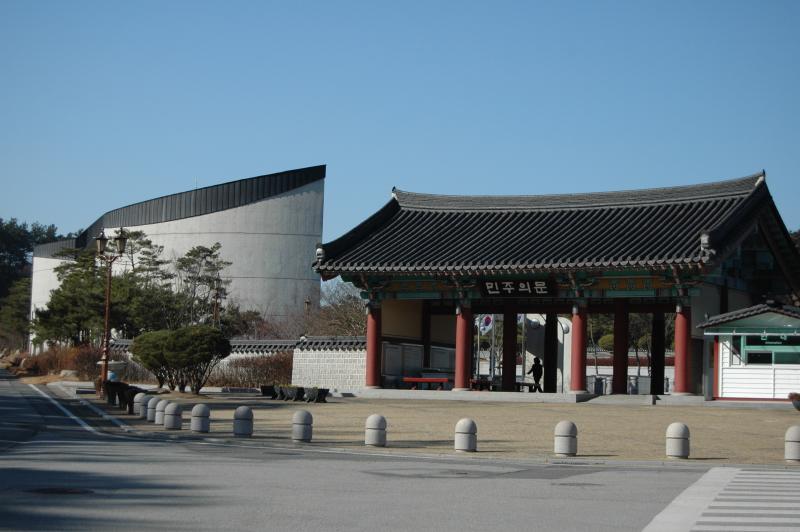 The modern incarnation of the cemetery is tourist-friendly, and an excellent primer to the events. Our tour guide, a friendly Korean women in her twenties gestured us into a video viewing room, where we would watch a thirty-minute documentary. That English-language video uses the available video from the event – this was 1980, not 1880. If there’s one thing you can say about some of Korea’s destinations, there is definitely an order to the way things are meant to be seen. 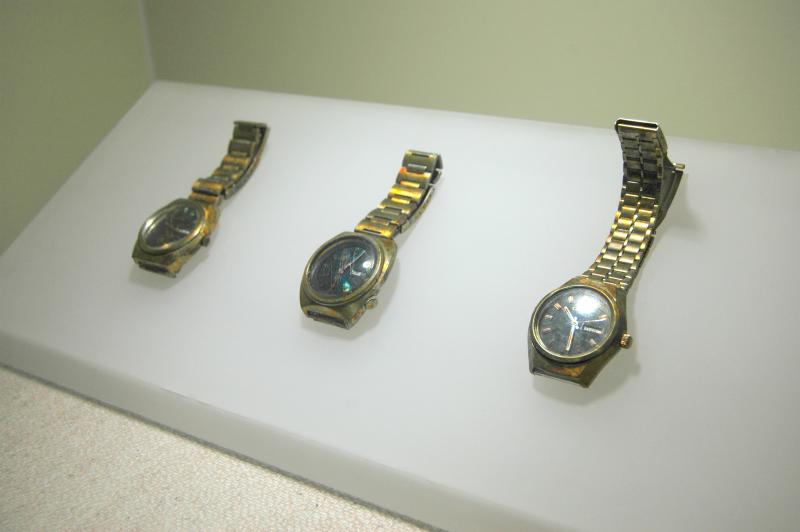 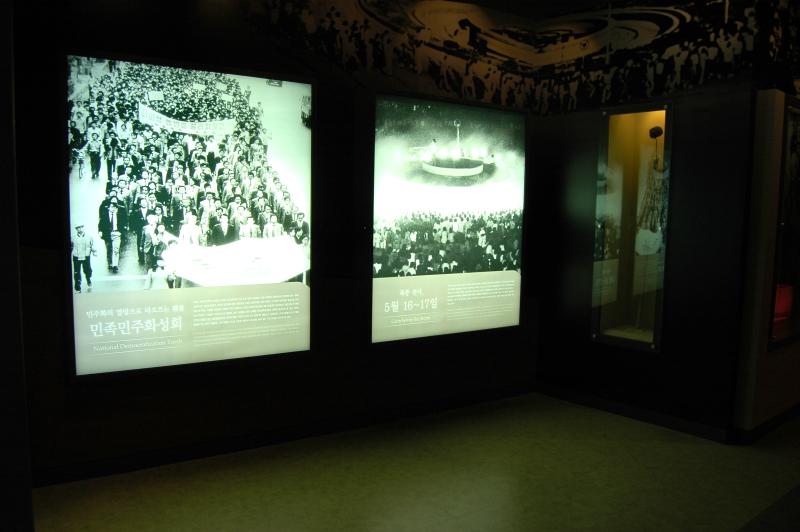 Upon entering the exhibit part of the museum, you’re struck with the relics of the event – stopped watches, a blood-stained 태극기 (tae-geuk-gi, or Korean flag), and a torch that led the protestors’ way. While there isn’t much to engage your other senses, the visual aspect, accentuated by the vivid colors on the second floor, are enough to prepare you for what’s next. 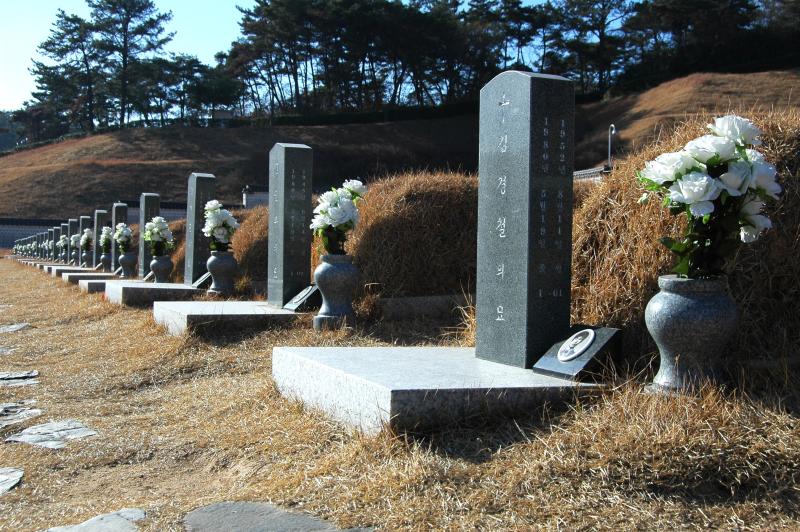 Once properly made aware of how and why these people died, it’s time to appreciate the people resting here. The official or exact death toll remains in dispute, but the May 18 Bereaved Family Association reports 165 dead and 65 missing, while the May 18 Memorial foundation reports there were 4,141 wounded. Hundreds of people are buried in this newer cemetery, immortalized with a black-and-white school-yearbook-like photo. 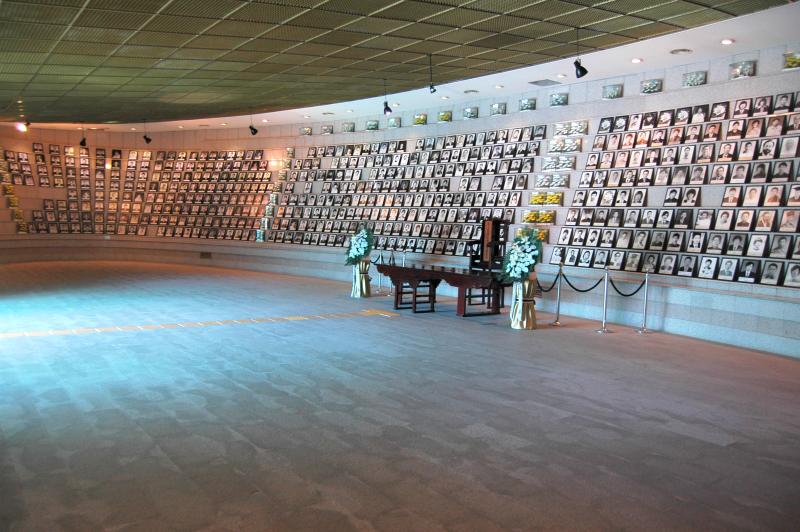 Speaking of photos, there are hundreds of them here. This basketball-court-sized hall was perfectly still, and was as solemn as the tombs themselves. Just like the cemetery, there is ample room for future honored additions; indeed, photos have been added as recently as last month and continue to be added. 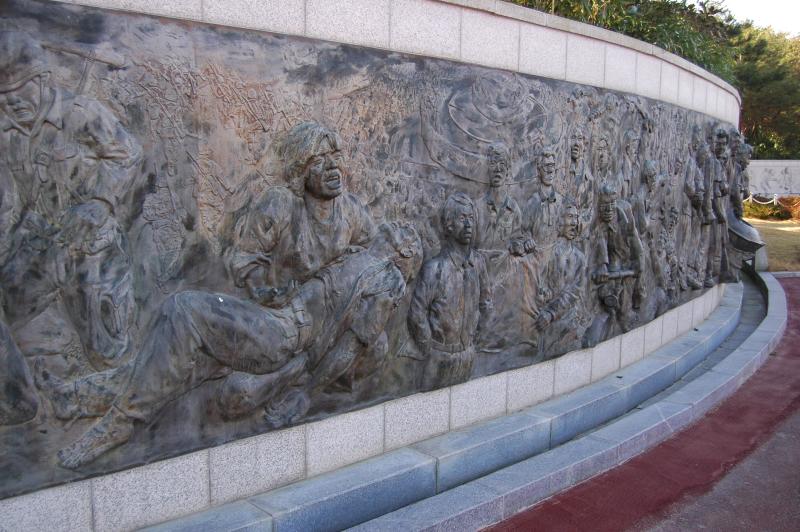 Beyond the cemetery and photographic memorials, a series of seven bas-reliefs show the history of civil disobedience or resistance. The symbolism is easy enough for the average tourist to figure out, and is a reminder that fighting for freedom is far from a single part of Korean history. 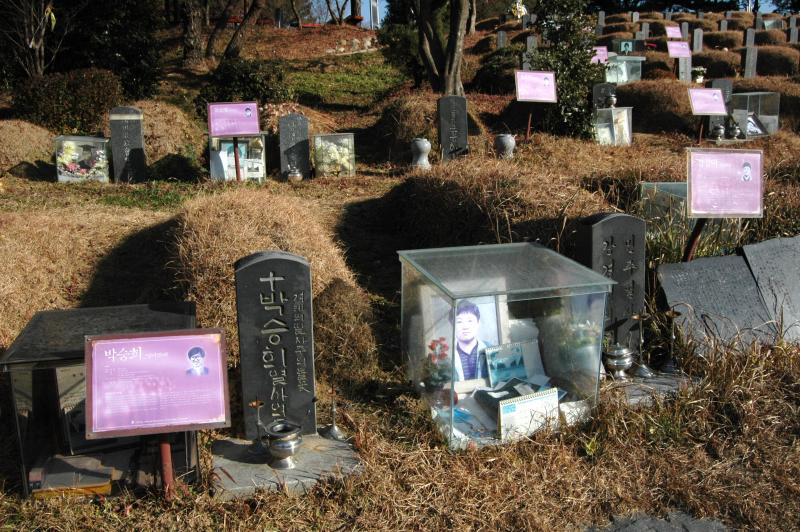 To continue exploring the history of this movement, walk across the street to the old cemetery or across town to the 5.18 Liberty Park / Memorial Culture Center. The former is the original resting place of the victims, while the latter is a recreation of a military police compound. A number of related sights are around Gwangju, although it does begin to feel like you’re getting beat over the head by then.

As we walked around the park, we couldn’t help but notice a group of young Koreans, dressed in prison clothing yet walking with a smile on their face. They were actors, having finished their shots for their day, yet seemingly happy at getting their story out for the world to see. Here’s hoping Korea’s present and future leaders remember that Koreans will fight to be free, and don’t take oppression laying down. 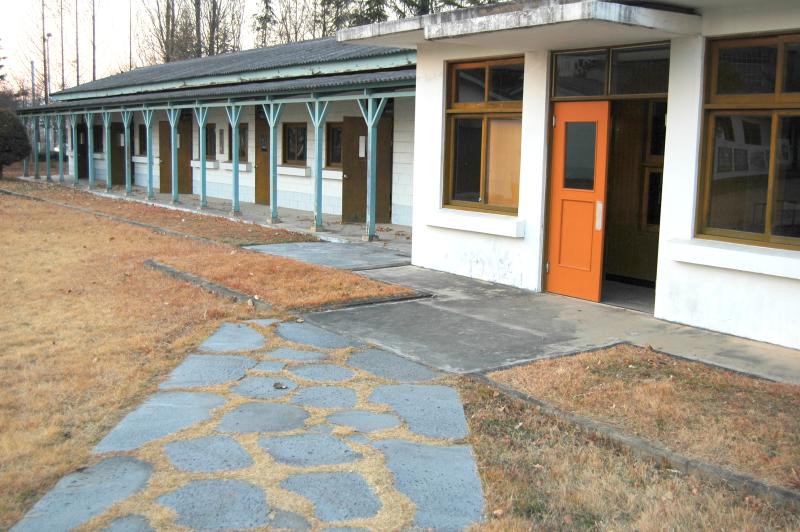 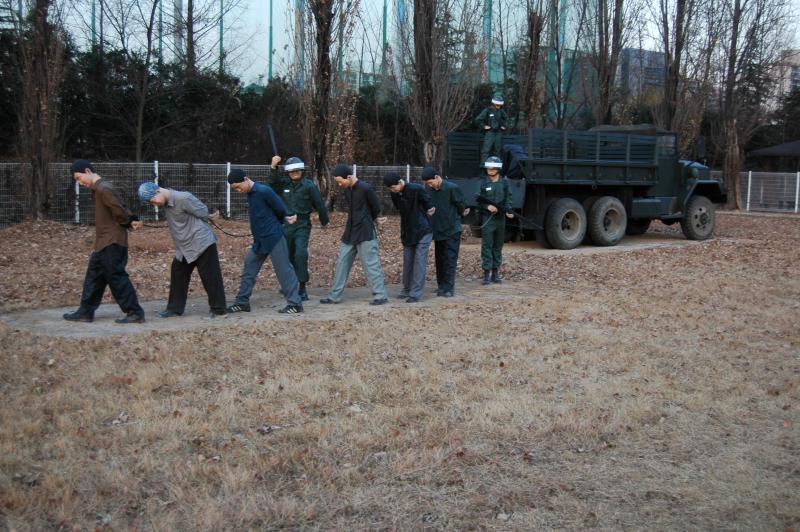 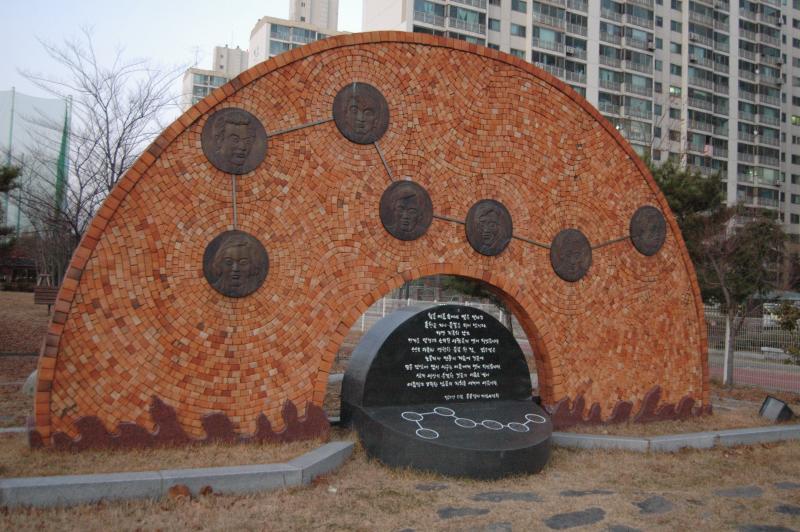 Ratings (out of 5 taeguks): How do I rate destinations?
Ease to arrive:

Author’s note: A version of this article is published in January 2011′s issue of the Groove.

Directions to 5.18 Memorial Cemetery: Get to Gwangju – from Seoul’s Yongsan station, every class of Korean trains make the trip. Once at Gwangju station, walk out to the main road, turn right, and head towards the bus stop. Take the appropriately-numbered bus 518 (comes every 25-30 minutes) north to the cemetery – it’ll sound like 국립 5.18 민주묘지 (guk-rib min-ju-myo-ji). Free admission; hours not specified.

Directions to 5.18 Memorial Park: take line 1 of the Gwangju subway system to the Kim Dae-Jung Convention Center station. Take exit 5 to street level, then walk straight and pass the KDJ Convention Center. Cross the street, then turn right and walk about 100 meters to the park entrance. Free admission; hours not specified.