My Japanese adventure started in Osaka. We arrived early in the morning after taking the over night ferry from Busan which proved to be a really nice way to travel. Although it isn’t a fraction as quick as the two hour flight from Tokyo Narita airport to Busan’s Gimhae airport, the 18 hour ferry ride was a nice way to catch up on some much needed sleep after Christmas.

My Japanese adventure started in Osaka. We arrived early in the morning after taking the over night ferry from Busan which proved to be a really nice way to travel. Although it isn’t a fraction as quick as the two hour flight from Tokyo Narita airport to Busan’s Gimhae airport, the 18 hour ferry ride was a nice way to catch up on some much needed sleep after Christmas.

Osaka’s bright colourfulness and playful character was hidden under a  foggy, grey and drizzly cloak when we arrived, much to my disappointment. It felt like we were arriving into Hull rather than somewhere I had wanted to go for so long. The only thing that suggested that there was something a little different about the place was the huge silhouette of a ferris wheel that overlooked the boats as they chugged into the port.

From the moment we got off the ferry the public transport proved to be brilliant and really easy to follow, something I missed when we got to Tokyo later with their stations with several hundred exits per station (I might be exaggerating just a little bit!). I particularly liked the private trains with their luxurious green velvet seats and faux woodwork walls and floors!

The first thing we did was to head straight to the Hotel, Hotel Taiyo that was very close to the Shinsekai area of Osaka. Some may have said that my suitcase was unnecessarily large for a week a way, so I was happy when the hotel turned out to be a 30 second walk from the station. Easy!

Next step was to quieten the growling of our hungry stomachs. Breakfast on the boat had proved to be a weird concoction of eggs, bacon, salmon, soup, kimchi, crab and seaweed. Not ideal. This wasn’t a problem as Osaka is known for it’s love of food. We walked through the covered shopping street of Shinsabashi that seemed to have everything. We saw pound shops next to evisu shops, Kitkat shops that didn’t even have one KitKat inside, Lolita dress shops and most importantly a big Hello Kitty Shop. It was weird as we walked down the road, in Korea every shop has their music turned up full pelt, trying to drown out the noise of the store next to them, who is trying to do the same thing right back at them. It all seemed quite civilised in Japan.

We eventually got to the Dotonbori food road, marked by a massive moving crab above a shop.We wandered down the road where there were lots of people stuffing their face with Takoyaki (battered octopus balls covered in Worcester sauce) and lots of nice smells. We eventually stopped outside a restaurant that seemed to have a good buzz about it, lots of people were queuing to buy their street food and the man outside seemed to jump on our hesitance and whisked us inside. We decided to try the traditional dish of Okonomiyaki. This is a savoury pancake stuffed with vegetables and meat, served on a hot plate that’s in the middle of the table. It was amazing. Apparently there’s an Okonomiyaki restaurant in Seomyeon in Busan so I’m looking forward to trying it. Later that night we decided to go back to this street and try a Japanese BBQ, the meat was amazing but it was a little gutting to have to pay for sides when we’re used to the bottomless extras that you get in Korea. We also enjoyed bucket sized Asahi’s which meant we slept well for our first night in Japan.

The rest of the day we carried on wandering around Shinsabashi, away from the drizzle, wasted a bit of money in the hundreds of arcades, unfortunately our efforts were fruitless, and popped into Partyland for some frozen yoghurt, DIY style. Lots of Japanese people were buying these beautifully sculpted pots of frozen yoghurts, decorated with fresh fruit and delicate wafers. Mine turned out to be a big mush with gummy bears on top. Practise makes perfect I suppose.

We left Osaka the day after to do some more travelling, but I felt like we were coming home when we got back. So much so that I made Nick come with me to ride Hep 5, a massive ferris wheel that’s on the roof of a shopping centre, which allows you to see it all sparkling at night.

New Years eve was one of my favourite days there, we decided to go and visit Osaka castle. This is a very grand white building with a green and gold roof. Although the castle and the museum were closed, we were allowed to look around the grounds, and were even lucky enough to meet some of the friendly local crazies who stopped us so that they could take pictures of us on their disposable cameras. The sun was shining brightly down on us and the street food that we decided to try out was amazingly good. I had some sort of sweet thing that was the size of a donut and a mix between a cake and yorkshire pudding filled with a sweet gooey middle. Nick had the same but it was filled with sweet red beans instead. He then went on to try out some Takoyaki which he assured me was equally as good, although the tentacles made me think otherwise.

Afterwards we headed to Nippombashi, which is the electronics district of Osaka. We walked up and down and took in the retro game stores, stopping every once in a while to have a dual at streetfighter or some other game that I had long forgotten about (unfortunately this showed as Nick beat me everytime). There were hundreds of game shops, fancy dress shops so you could buy outfits to look like your favourite anime characters, just like this man I saw outside of the castle. 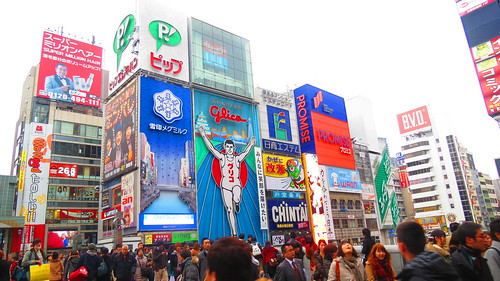 Along the way we decided to stop off at Mel’s cafe, which is a Maid Cafe. It’s pretty obvious but this is where the girls that serve you are dressed as maids. We’d been told that this was one of the least seedy ones. When I walked in it felt like we had stepped into the delorian and had been escorted back to a Little Chef resturant in the mid 80s. Up the walls was wooden lattices that were draped with fake ivy and the chairs were very canteenesque. The girls were all very beautiful, although dressed in maid outfits that were very suggestive.

Unsurprisingly, I was the only girl in there and felt slightly uncomfortable, although no one seemed to notice, they were all too busy looking at the maids. I noticed there were alot of men there on their own, which we’d heard it’s very common for maids to get regular customers. Every table had a little silver bell on it that you rang to call them over. We decided just to order some drinks, I went for a hot chocolate and Nick went for a strawberry milkshake.

The maid found it hilarious when she came back with a pink fluffy drink covered in cream and sauce and Nick admitted it was his. Although there was nothing overtly sleazy about the place, I was quite happy to leave. The maid escorted us to the door and stayed there until we left. Unfortunately I wasn’t sure of the rules on taking photos so decided not to, as noone else seemed to be doing it either.

Following that we went to Osaka tower, but there was an 80 minute wait to get to the top, so we hung around Shinsekai, which is known as the seedier end of town, had some Katsu, which is basically battered food that’s deep fried and served on a stick. Everywhere you looked there were people trying to grab your attention and lure you into the brightly decorated restaurants. We made a special effort to follow Japanese ettiquette and not double dip our sticks in the shared sauce pots, cleared up and went back to the hotel which was about a 5 minute walk.

We lounged around in our Yukata style dressing gowns and got ready for New Years Eve. We did a bit of research, and decided to head to the Hub, near Shinsabashi. This was a British themed pub. As soon as we walked in it was clear that we were probably the only Brits in there, but we got talking to an old American Pilot who was away from home on NYE and a couple of young Japanese guys who were incredibly happy to play host and introduce us to other people. The bar itself was very much like a traditional English pub, with lots of knick knacks dotted around, dark polished mahogany and carpets.

When the clock struck 12 it felt like I had made firm friends with his Japanese girlfriends, although they didn’t speak much English, one of them spoke Korean very well and we all had a shared love of K Pop so if it ever got awkward I could just hum a G Dragon song which got them super excited!

It was funny to be spending NYE in a place that I never even dreamt I would end up going to, very far from my home from home, not to mention my real home, with someone that I didn’t even know last year. It just goes to show how much can change in 12 short months.

We managed to get the metro home, which was running later that night and by 4 Nick was shovelling ramen into his face whilst watching polar bears fighting on his David Attenborough DVD. 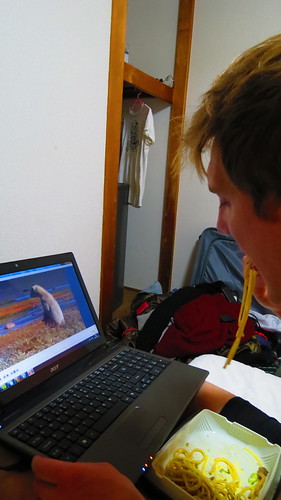 The next day we had to be up and out by 10, so feeling exhausted we said goodbye to a couple that we had met while staying in the hotel and then got ready to go and get our bus for more Japanese adventures. 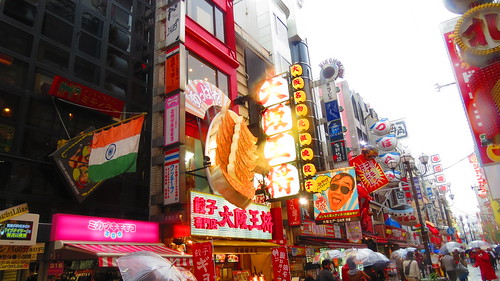