In order to get to the main road from our hotel, we scoot down this little alleyway and say hello to the cutest kids who live just to the left.  Sometimes their shy, but other times they’ll wave and smile and even let you take their picture! 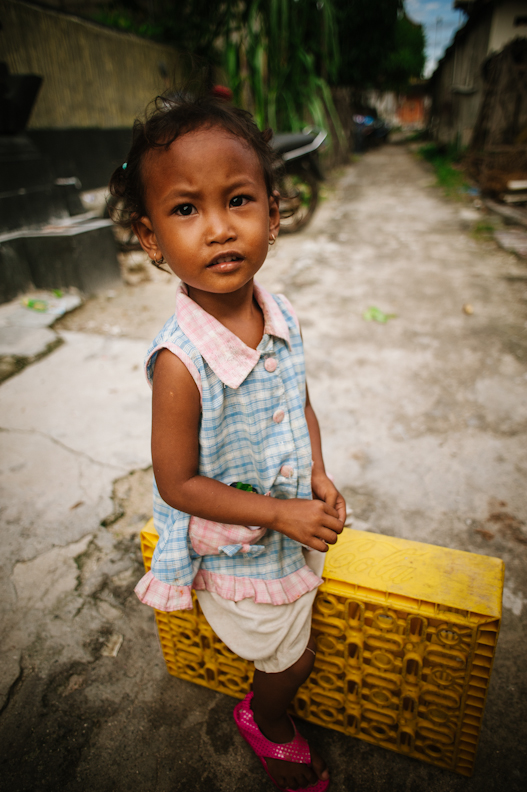 In order to get to the main road from our hotel, we scoot down this little alleyway and say hello to the cutest kids who live just to the left.  Sometimes their shy, but other times they’ll wave and smile and even let you take their picture!

It’s another beautiful day on the island today! 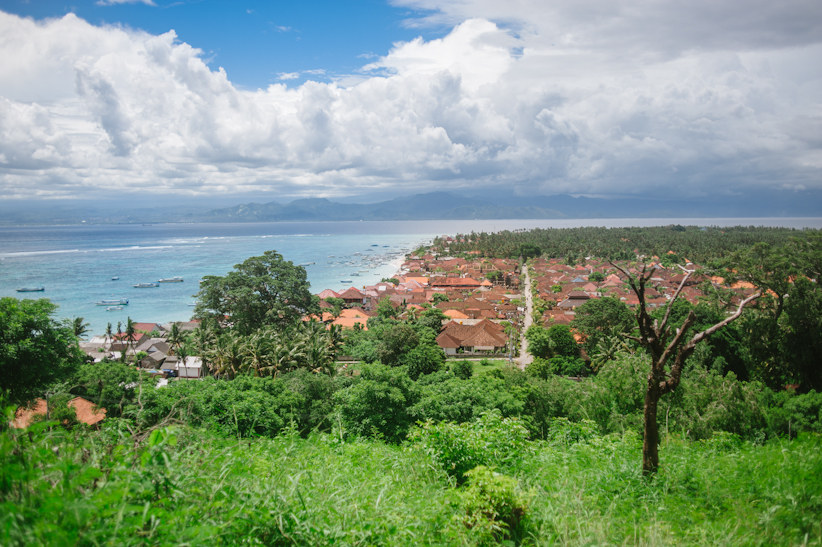 We scooted over to Dream Beach for a swim, but the waves were HUGE and we weren’t all that interested in getting tossed around, so we went out to a lookout point and watched for dolphins, which we didn’t see… but, we did spot a gigantic water turtle and a ginormous wave that crashed on the cliffs right as Aaron was taking a photo of me!  2 seconds later, I was drenched! 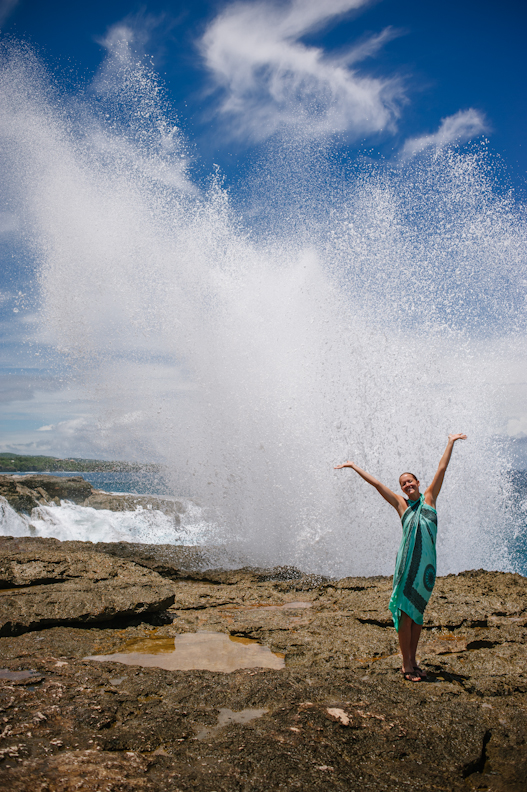 We decided to try out this new local warung (small restaurant) overlooking Nusa Cennigan Island for lunch.   It’s run by a young Lembongan local who also doubles as the head cook!  Last time we were in Lembongan (3 years ago), the foundation of this place was being laid and it’s only been open now for a couple months… Goes to show just how long it takes things to get up and running in these parts!  The $2.50 Nasi Goreng was fantastic… 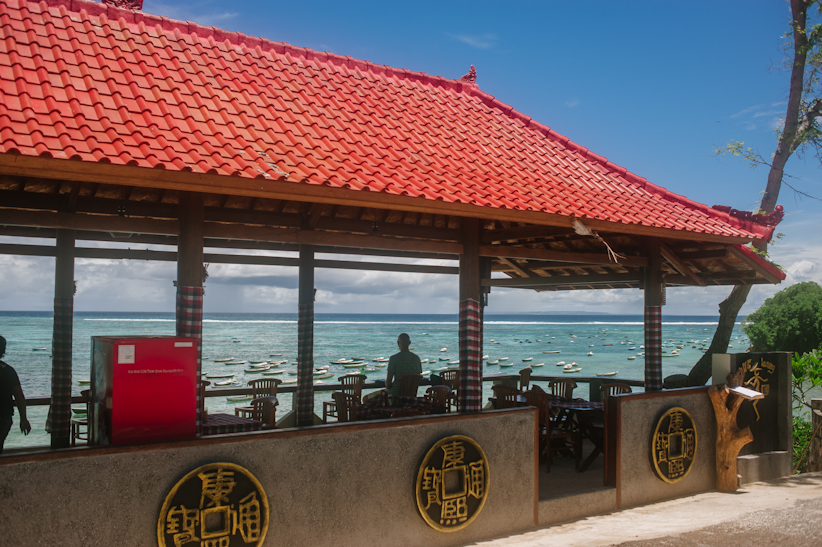 but the $2.00 fried bananas with chocolate ice cream stole the show! 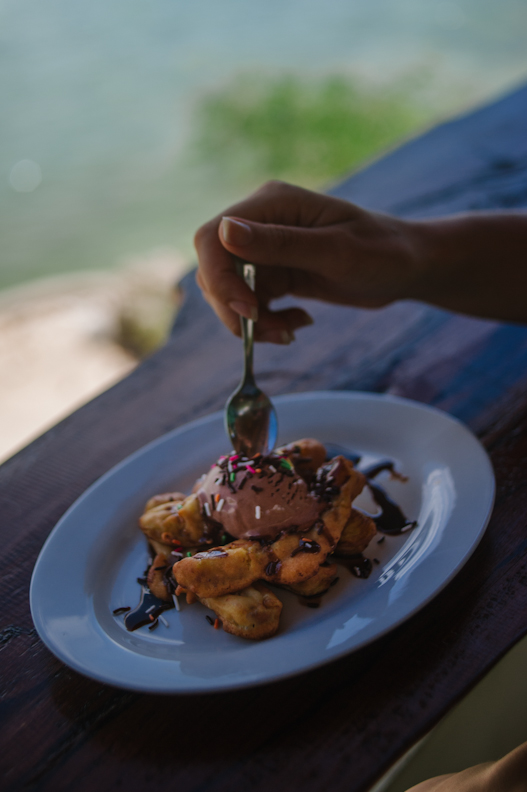 Here’s a little bit of Korean silliness for you, in case you’re missing Korea, like me!  I bought this little change purse at DAISO for $1 because I loved what it says!  It became my money holder for this trip! 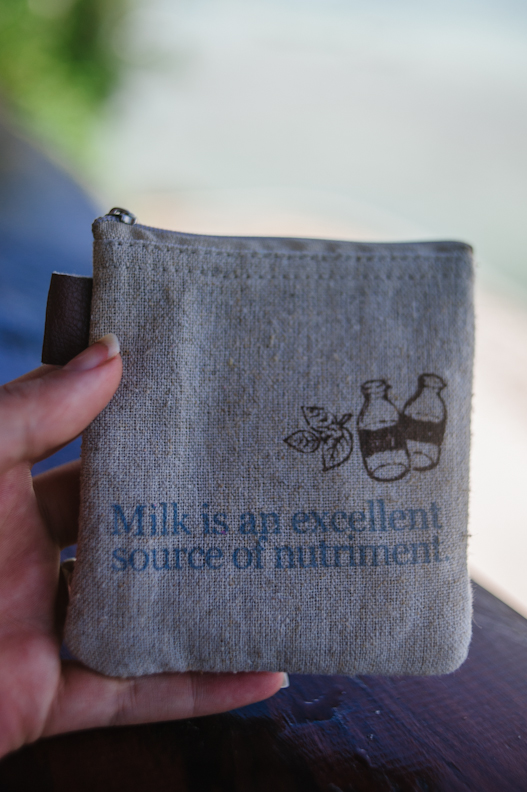 We decided to take the road less traveled and give ourselves a back-road tour of the island. 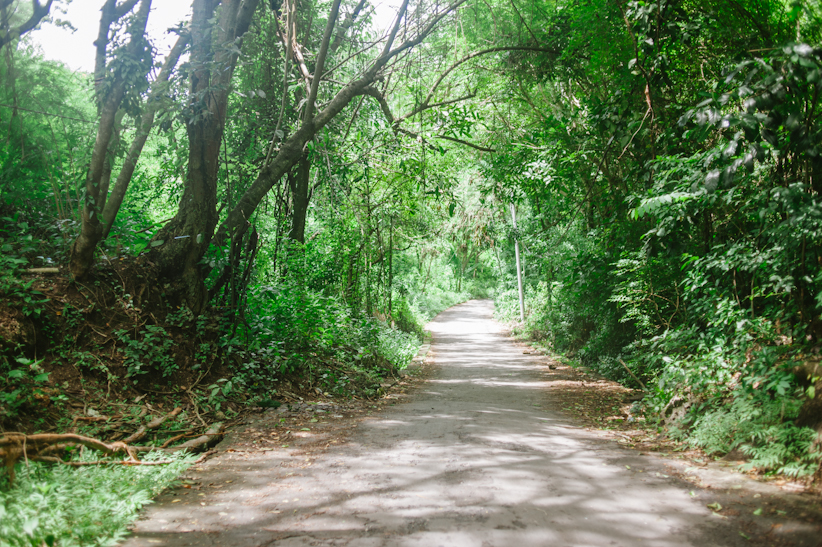 We were missing Dino, Bobo and Silisti, so we took the narrow and very bumpy road leading to the mangroves… 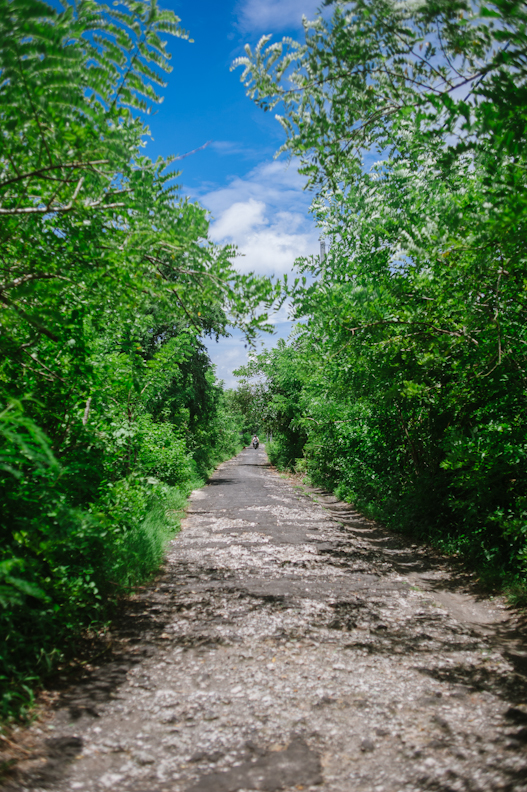 … and through the seaweed farming area to hang with the three of them for a bit. 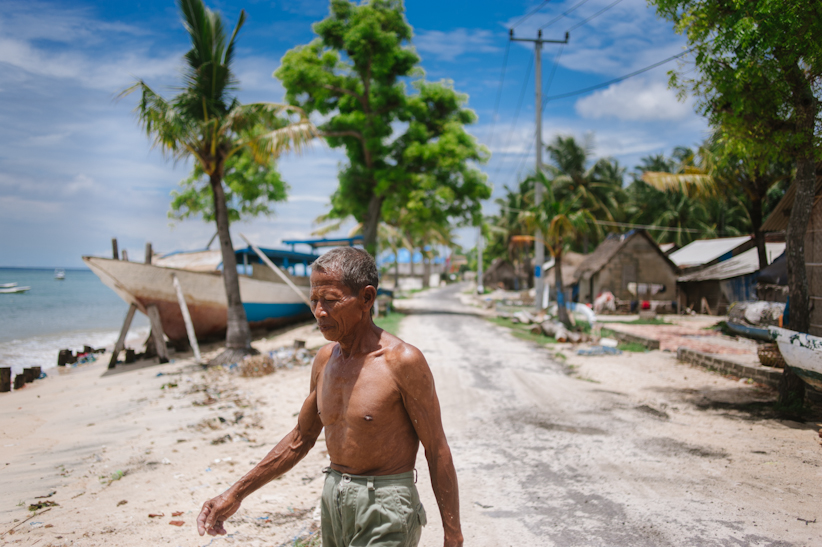 FYI: The best snorkeling in Lembongan is actually right out in front of their warung (small restaurant), but most people pay a boat $20 to take them out there.  Today, Aaron and I put our big boy pants on and swam (FOR FREE) the 200 meters out to the corals and back, spotting sea urchins, dinner plate sized giant starfish, huge clam shells, stunning coral reefs, and tons of bright, colorful, and fancy looking fish along the way!
We came in, patted ourselves on the backs for swimming about 500+ meters without resting and went to dinner!  Maria’s Warung is one of the best hidden gems on the island when it comes to cheap food and great atmosphere! 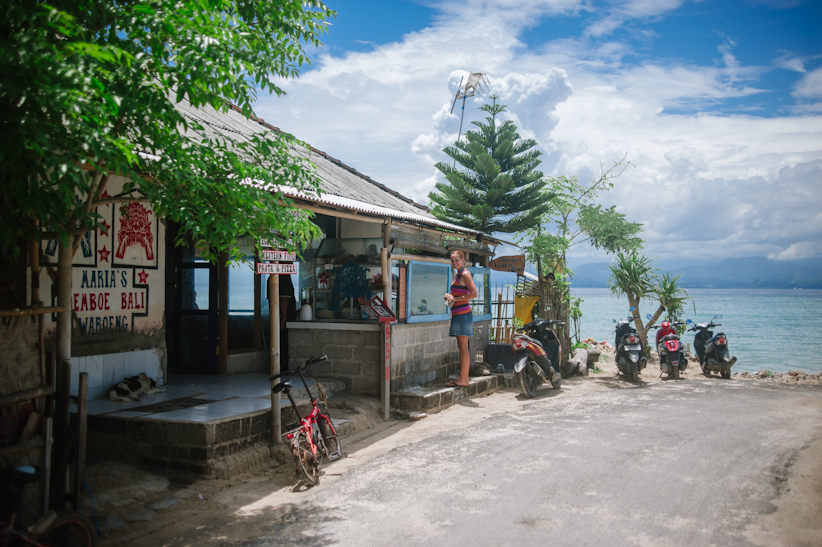 A husband and wife team do all of the cooking here while the kids bring the menus and play around on the beach below, until their mom calls them in to help with something.  Yep, no pants, no problem. 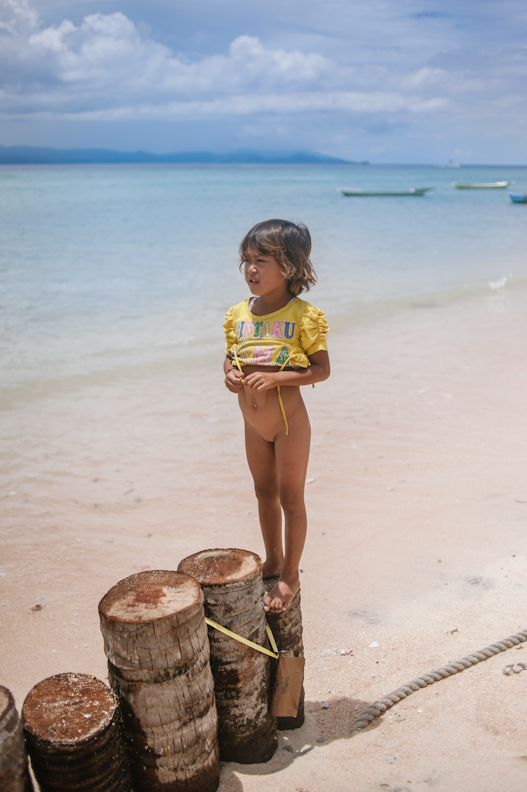 Their $1.20 Nasi Goreng is GREAT and their $2.40 Margarita pizzas, which are made with their own homemade bread, were delicious and a must try!  If you’re in Lembongan, take your scooter out here for a cheap and delicious meal! 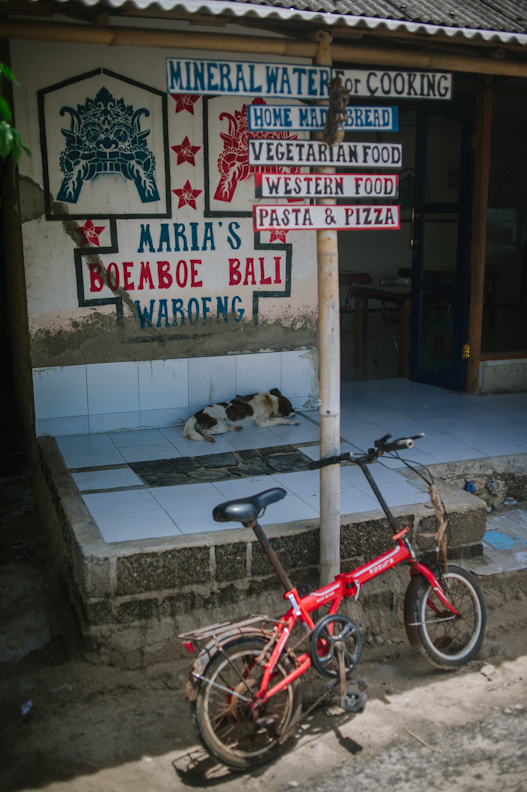 After dinner, we took a walk up and down the beach as the sun was setting! 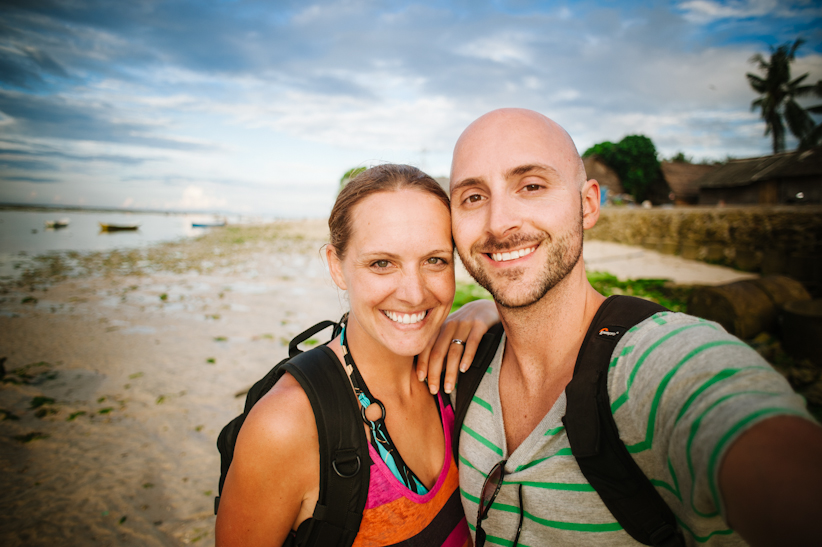 The tides here are REALLY extreme.  During the day, the water crashes up against the restaurant… then at night, there’s a beach full of sand to walk on! 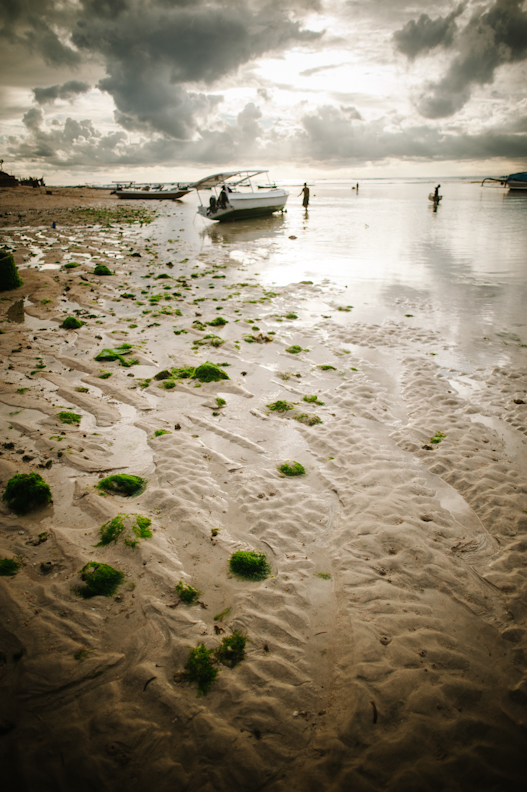 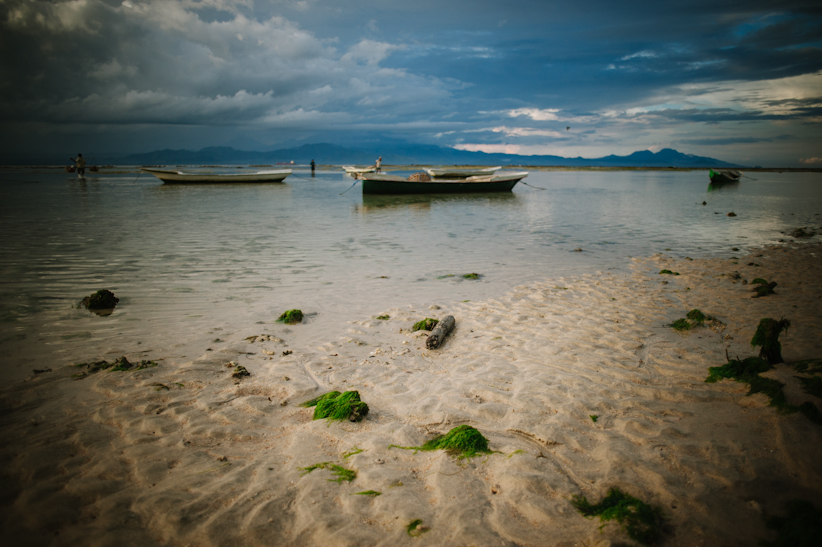 This is about the time of day when all of the seaweed farmers wade out into the water to collect the seaweed from their farms in the water!  Look, I helped! 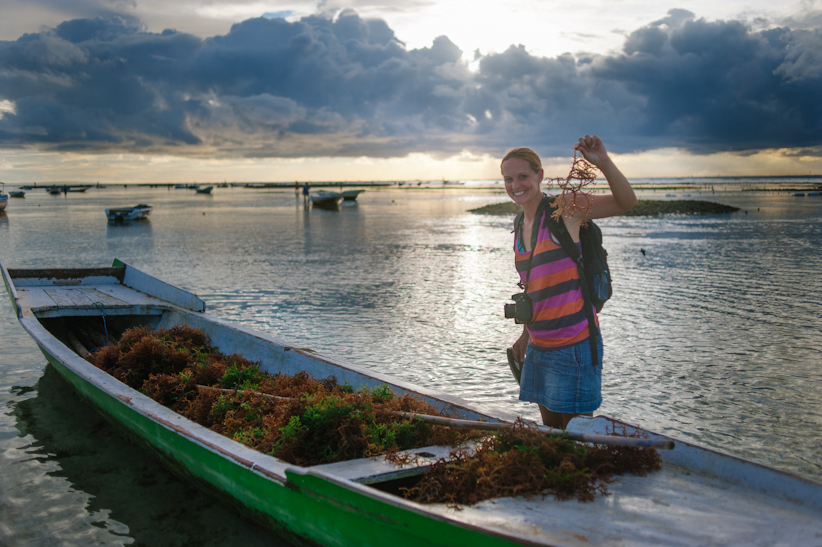 We went back to the hotel after this and hung out with Darshan and Lilia on our balcony and had a few mixed drinks before calling it a night and heading to dream land!