Define rockabilly: a genre of music, blending rock and hillbilly with blues, bluegrass, and country. A rockabilly band typically features a slap guitar, drums, and at least one other guitar (electric, bass, or acoustic), but may include other instruments as well. Popular artists include Elvis Presley and Buddy Holly, while the genre influenced artists from the Beatles to the Stray Cats. The genre currently enjoys a small but established space with genres including punk and jazz – genres not in the mainstream, but not completely obscure. See the Wikipedia page on rockabilly for an excellent primer on the subject.

Define rockabilly: a genre of music, blending rock and hillbilly with blues, bluegrass, and country. A rockabilly band typically features a slap guitar, drums, and at least one other guitar (electric, bass, or acoustic), but may include other instruments as well. Popular artists include Elvis Presley and Buddy Holly, while the genre influenced artists from the Beatles to the Stray Cats. The genre currently enjoys a small but established space with genres including punk and jazz – genres not in the mainstream, but not completely obscure. See the Wikipedia page on rockabilly for an excellent primer on the subject.

Rockabilly is alive and well in Seoul, and last weekend it found its way into a couple of Hongdae venues. Three bands performed at a ‘warm-up’ type show on Friday at DGBD, while nine rockabilly bands performed on Saturday at Sang Sang Madang. The Lady in Red registered for tickets online, and off we went.

The first band of the night was Stay Gold, which the Lady in Red and I missed because we fully expected the show to not start on time. Sorry guys – I’m sure you were great.

The next band up (and the first we got to hear) was Oh! Brothers: 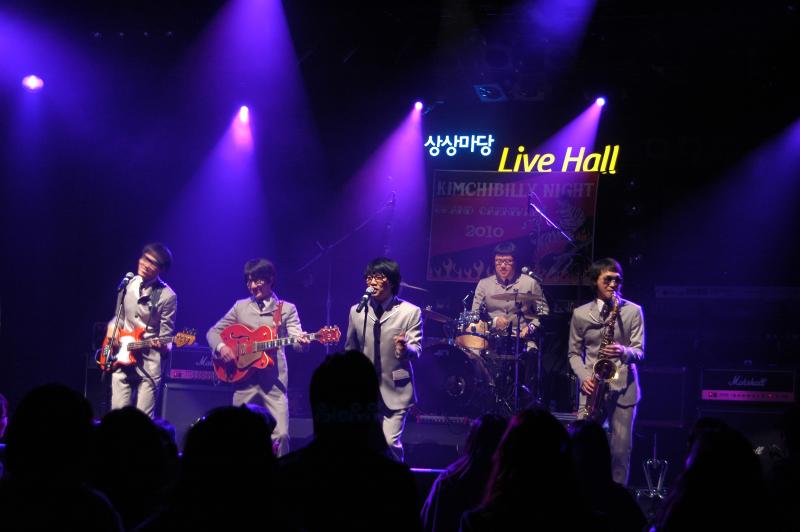 Oh! Brothers seemed to be cut from the same cloth as the Beatles themselves. While the quintet played well together, the energy came alive when the song started and ended as soon as the song did. Over time, I’d love to see them keep their energy going. Vocally capable, harmonized well, and played a pretty good ‘Johnny B. Goode’.

Next band up – Sunday Losers: 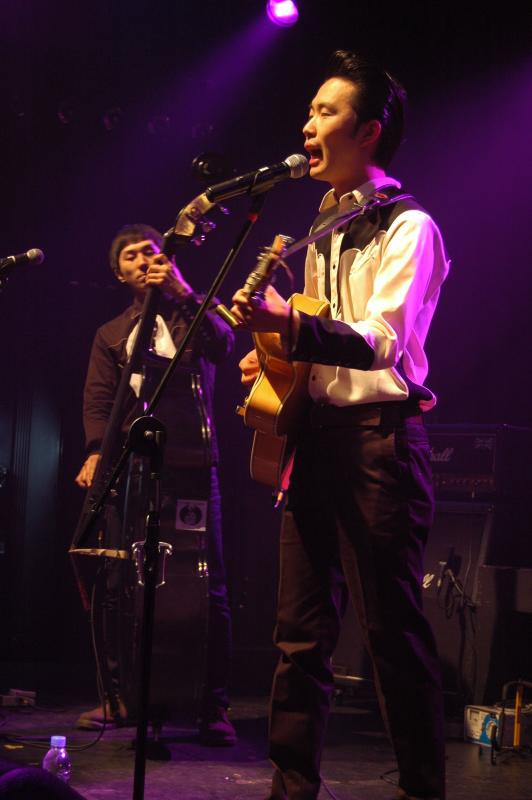 Elvis called – he wants his hair back. Hailing from Busan, Sunday Losers featured an instrument rarely heard these days: 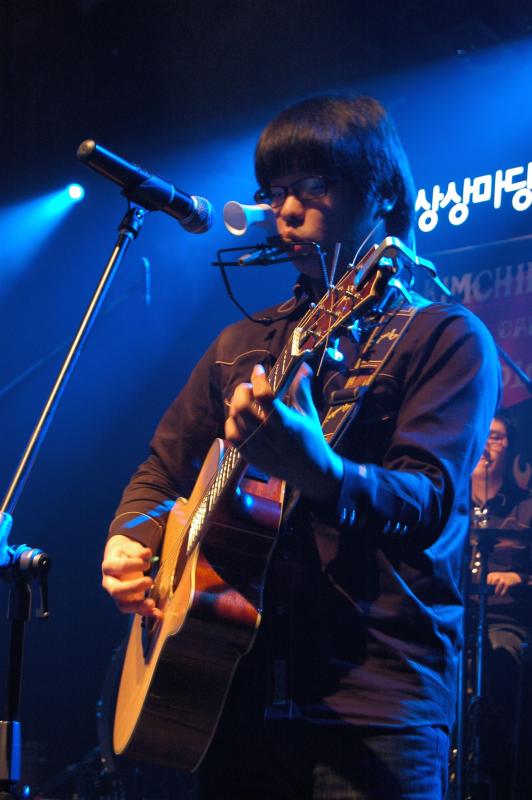 The kazoo. Yes, that plastic toy you played when you were six still has an endearing quality about it. Although the kazoo only came out during a few solo opportunities, they were well-received. Their set was primarily older country songs, proving that rockabilly is a more diverse genre than I realized.

Next up – Kingston Rudie Ska: 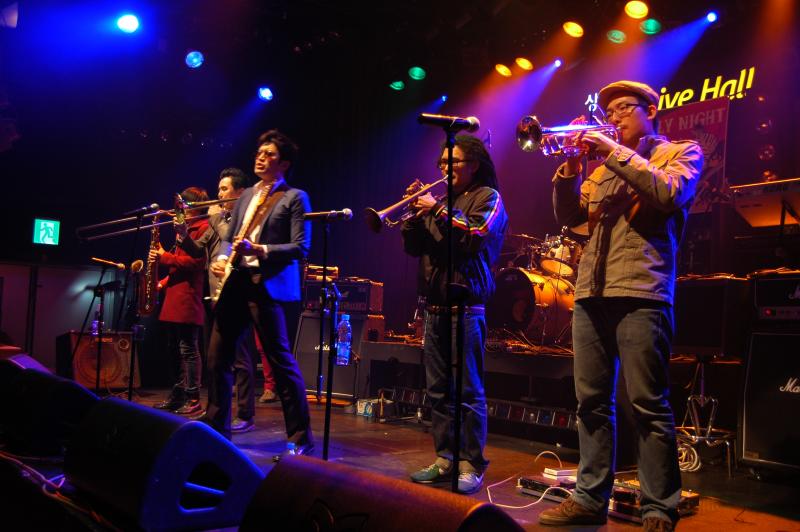 Kingston Rudie Ska proved the largest band of the night – 2 trumpets, a trombone, a saxophone, bass guitar, electric guitar, keyboards, drums, and a singer /beatboxer / hyperactive dancer. Their mixture of ska and reggae added some energy to the crowd, and was the first band to really get the crowd dancing.

The Soul of Liberty took the stage next: 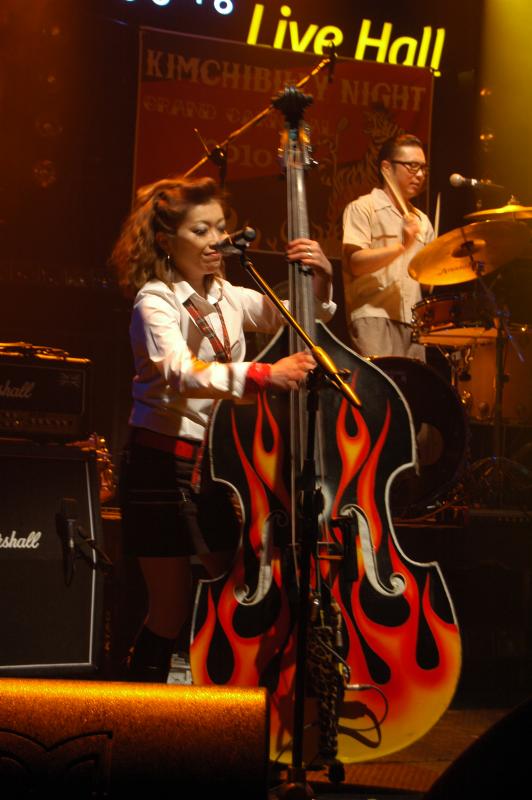 A rarity in the world of rockabilly – a female slap bass player. While they sang in Japanese, the beat was good for swing dancing or just jumping around. 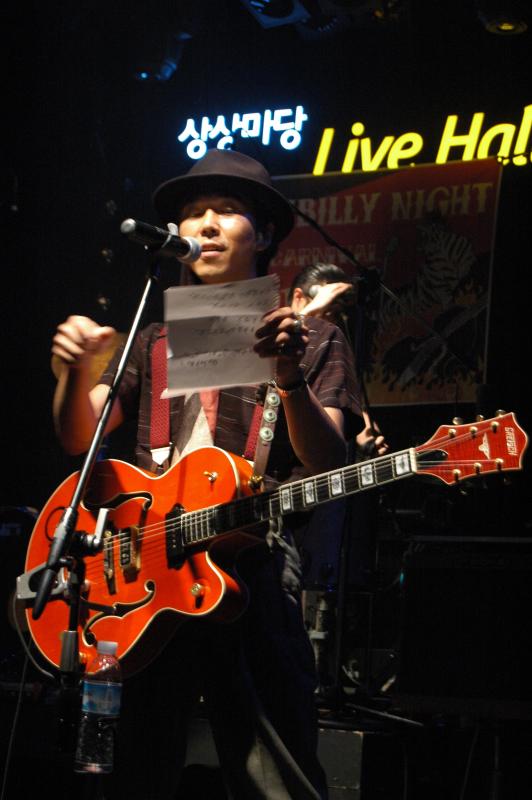 Soul of Liberty was one of two bands from Japan, so the band worked hard to break through the language barrier. The guitarist’s cheat sheet allowed him to phonetically sound out enough Korean words to gain the crowd’s approval.

Watch out for Galaxy Express: 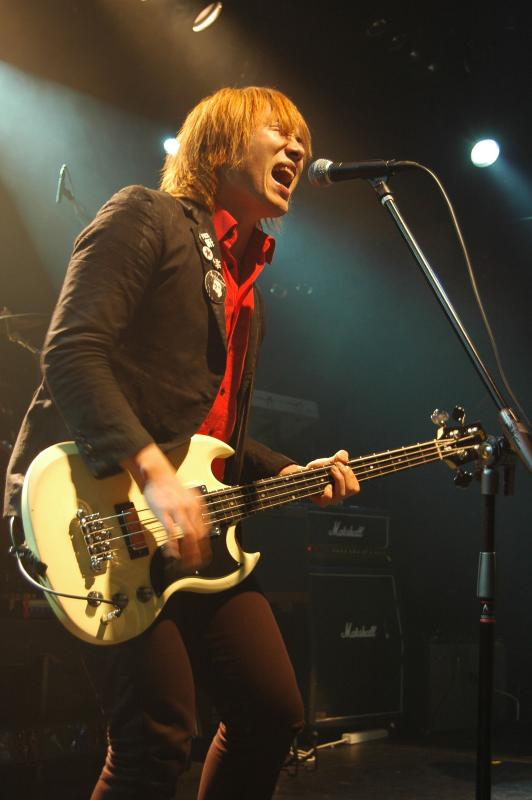 Who plucks the strings? This bass guitarist punched out chords on the thicker strings – not an easy job. To say this long-haired trio played hard rock is kind of like saying Ghandi was a nice guy. They were the only band to hide the kids from, especially a few four-letter words and middle fingers flung towards the audience. 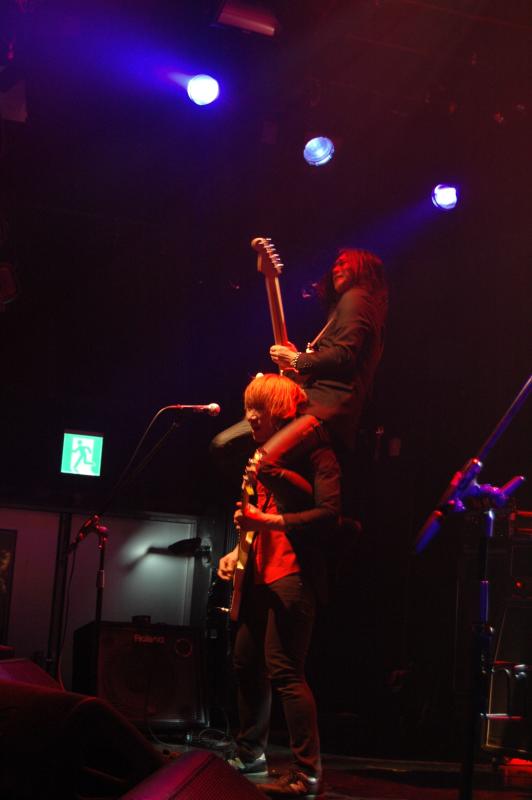 To their credit, Galaxy Express got the crowd jumping – about the only thing you can do when the genre shifts to punk / hard rock / psychobilly.

The Tennessee Cats came next: 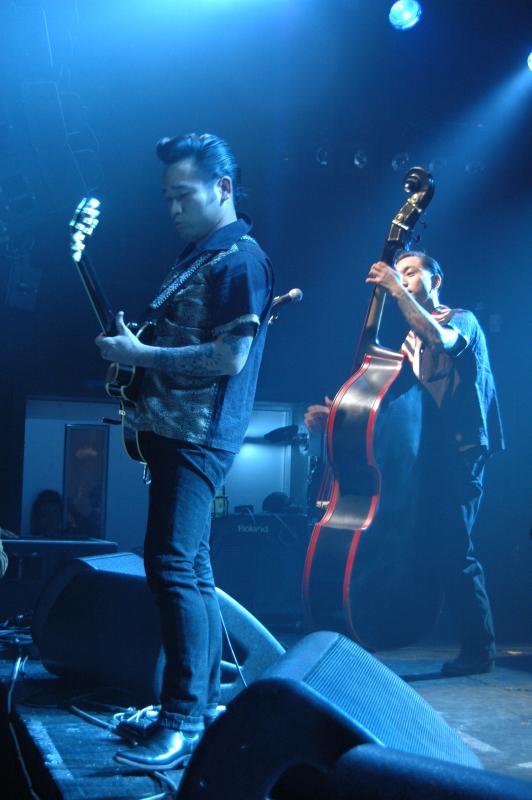 Playing after a psychobilly band is a tough act to follow, but they kept the energy going through their set. Why a band from Japan would name themselves after a state in the US is beyond me, but the Tennessee Cats also made an effort to bridge the language barrier. Throwing in some English played nicely to the 1/4 of the crowd not from Korea, while ‘Viva Las Vegas’ was a nice throwback to where rockabilly came from.

Next up – Crying Nut: 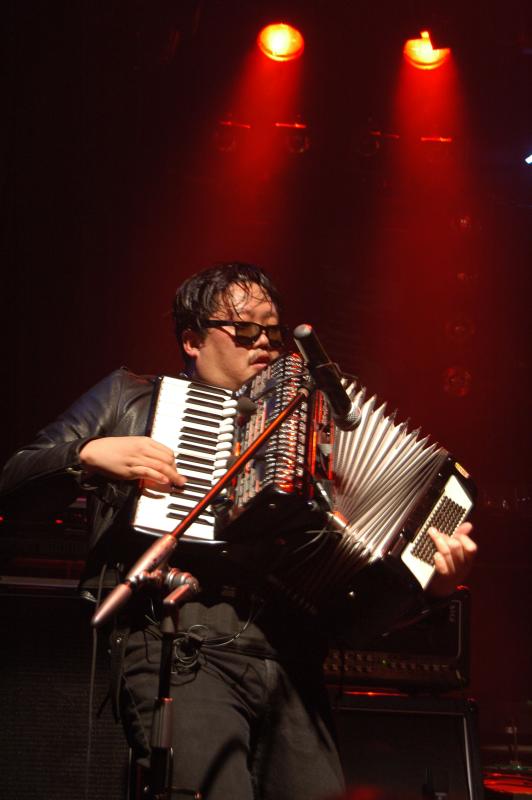 It’s not every day you hear an accordian as a principal instrument. A tin whistle (or was it a piccolo?) made a cameo appearance as well. This hard rock quintet brought the crowd to the stage, who until then had kept a polite distance and enabled photographers easier access to move around. 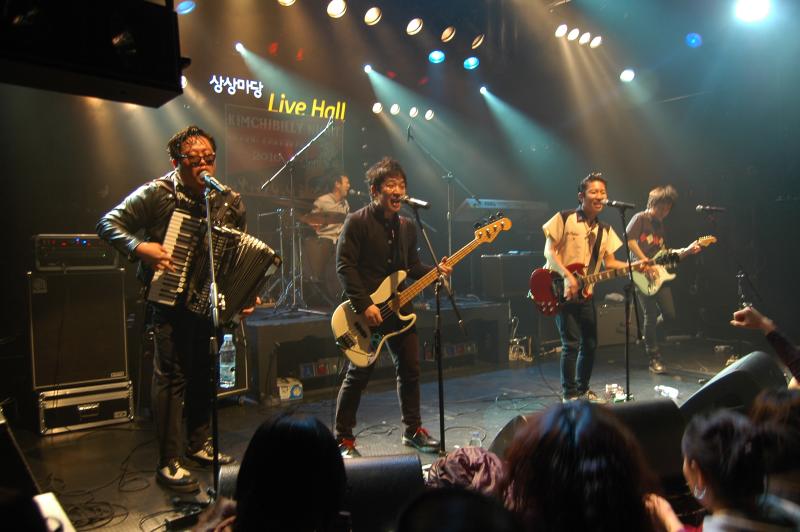 You’ll be seeing lots more of these guys, if you haven’t already – they were wedged in between Fall Out Boy and Weezer at the 2009 Jisan Valley Rock Festival.

Eventually we come to the headliners themselves – the Rock Tigers: 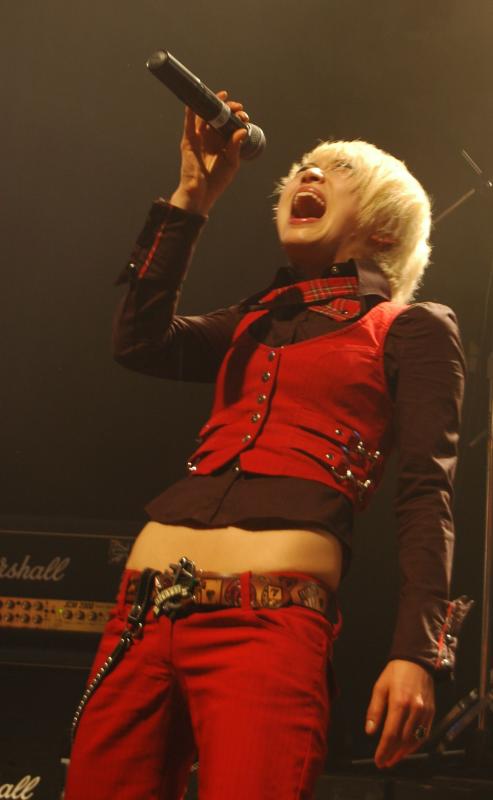 Velvet Geena – the lead singer herself getting the crowd pumped up. As the self-proclaimed pioneers of rockabilly in Korea, the Rock Tigers have the longest track record – and one of the tightest shows. Expect high energy, quick transitions from one song to the next, and a great stage presence. 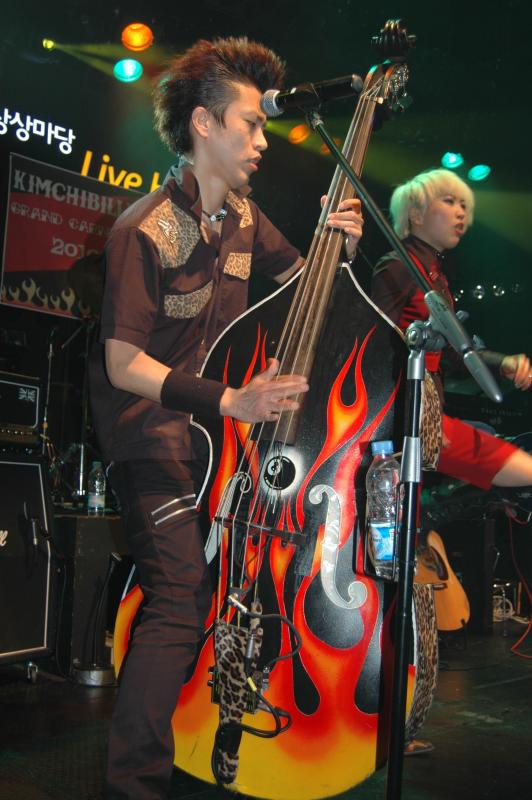 Roy on the Upright Bass, sporting his signature hair style. 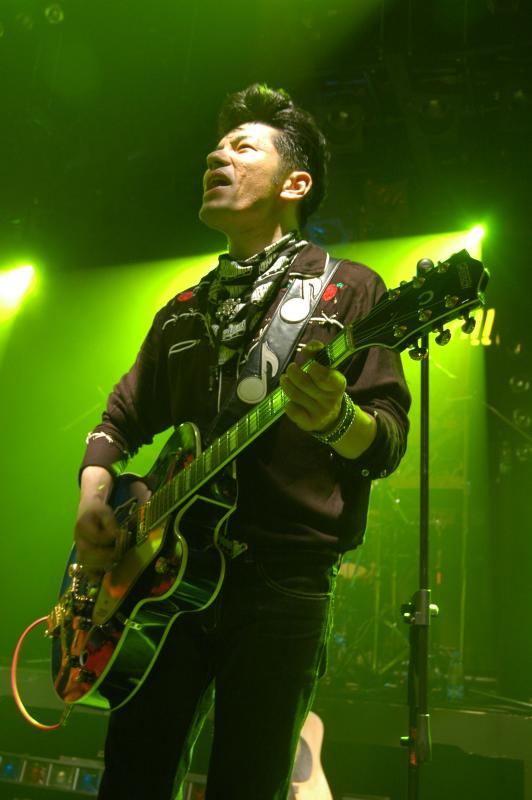 Tiger on the guitar and vocals. That the Rock Tigers sing and speak some English make them approachable and foreigner-friendly – especially after the show for an autograph. An excellent show, especially the last three bands.

My only complaint about the show was the lack of seats and drinks. Nine bands for an late afternoon to late evening show? Almost everybody made a run to the Buy the Way across the street at one point or another.

Geena mentioned that there would be another rockabilly show in March – stay tuned for more details on that in next month’s event schedule.